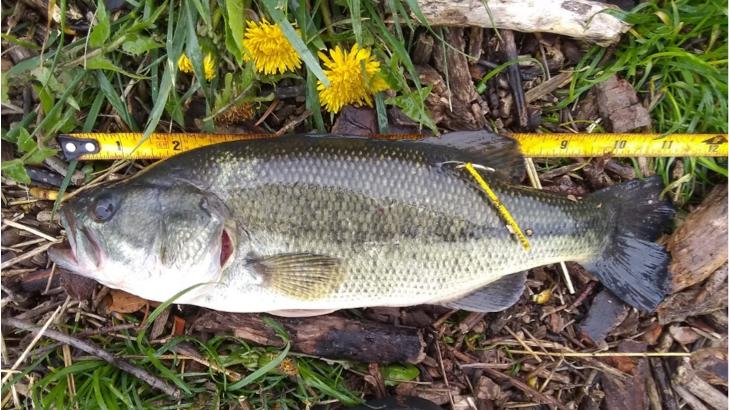 What’s so special about this fish? It’s all about the little yellow tag. (Metropolitan Water Reclamation District)

Researchers at the Shedd Aquarium and Metropolitan Water Reclamation District recently teamed up on an exhaustive study of the Chicago area waterway system’s fish population, meticulously combing through data gathered over the course of several decades.

But one of the most important discoveries documented in the report happened totally by chance.

This spring, a largemouth bass was fished from the Skokie River, just south of the Skokie Lagoons, and while bass are a common enough haul, this particular fish had a tag on its back that caught the angler’s eye and prompted a call to the MWRD.

As it turned out, MWRD aquatic biologists had attached the tag back in October 2019, after catching and releasing the bass during a fish survey conducted in the North Branch Canal near Goose Island. What made the bass’s 30-mile journey particularly exciting to scientists and conservationists is that it provided proof of the success of a 2018 dam removal on the North Branch. (Anglers who catch a fish with an MWRD tag are asked to document it when possible and email MWRD to report it.)

The 4-foot-tall, 100-year-old dam, located at the confluence of the North Branch and North Shore Channel between Foster Avenue and Argyle Street, had been too great a barrier for fish to overcome, essentially blocking upstream passage. It was replaced, following demolition, by a series of riffle pools, which stairstep fish upstream.

Discovery of the tagged bass in the Skokie River “suggests remarkable fish mobility and a healthy ecology that has been made possible by our many partnerships interested in river restoration,” MWRD President Kari K. Steele said in a statement. 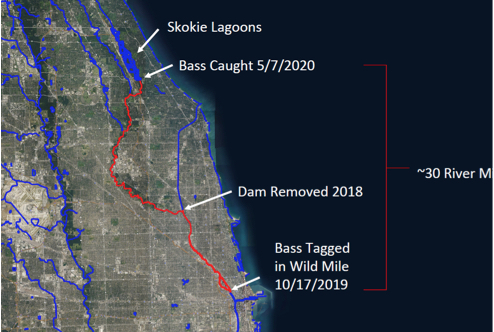 A map of the fish's journey. (Austin Happel / Shedd Aquarium)

For environmental advocates, this lone 11-inch fish represented the realization of a dream nearly 20 years in the making.

“Friends of the Chicago River has been imagining fish swimming freely through the river since 2002,” Margaret Frisbie, the organization’s executive director, said in a press release. “This largemouth bass represents good stewardship, tenacity, and proof that if we invest in the Chicago River system, wildlife will respond. We could not be more thrilled.”

Additional results published by the Shedd and the MWRD, show a gradual increase in both the total number of fish and fish species, including native species, in Chicago’s waterways. At the same time, the number of invasive species has declined.

“Many organizations across the Chicago area have been working hard to help the water that runs through our city rebound after decades of pollution and mistreatment,” said Dr. Austin Happel, research biologist at Shedd Aquarium and lead author of the study. “Now, we have data that shows us that restoration and advocacy efforts are benefitting the Chicago area waterway system and bringing back aquatic species that are essential to healthy ecosystems and thus healthy natural resources.”

Want to contribute to ongoing studies of the Chicago River? Join the Shedd Aquarium for its seasonal Kayak for Conservation program. For details and registration information, visit the Shedd’s website.