Chicago Officer Who Flipped Off Protesters Relieved of Police Powers 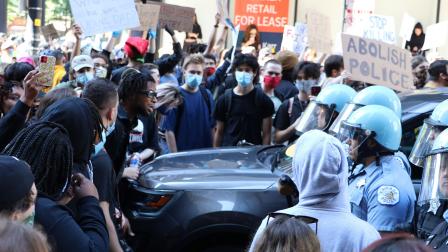 A Chicago police officer who was caught on camera last week extending his middle fingers toward peaceful protesters has been relieved of his police powers, days after Mayor Lori Lightfoot called for him to be fired.

The Chicago Police Department on Tuesday issued a statement saying Superintendent David Brown had relieved the officer of his police powers for “conduct unbecoming” of an officer after he was seen flipping off protesters during a march on Armitage Avenue last Thursday.

“The officer used a vulgar, offensive gesture directed at a member of the public while on duty and in uniform,” the CPD said in a statement. “The member will be limited to administrative duties at the direction of the Superintendent.”

Here's a clearer photo of the officer pic.twitter.com/W9APOtT28b

A photo of the officer was captured by a Block Club Chicago photographer, who posted the image on his Twitter account. The CPD’s official Twitter account quickly replied to the photographer, saying it “strives to treat all individuals our officers encounter with dignity & respect. We do not tolerate misconduct of any kind, & have opened an investigation into this incident.”

The next day, Lightfoot called for the officer to be terminated.

“This officer is sworn to serve and protect the community,” she said Tuesday afternoon, “and in a heated circumstance, no doubt, but he went against his training and he brought shame upon his department.”

Any recommendation by the superintendent to fire an officer must be upheld by the Chicago Police Board. That decision can be challenged in court.

Last month, after President Donald Trump threatened protesters, Lightfoot said “I will code what I want to say [to Trump] and it starts with F and ends with U,"

Asked Tuesday how the actions of this officer compared to her own, Lightfoot said she believes there’s a “big difference,” adding that she has no regrets over her choice of words.

“First of all, I’m a public official and I coded my words,” Lightfoot said. “I think there’s a world of difference. I’m always gonna speak my truth when it comes to the president of the United States, particularly when he is trying to foment, as he did last week – and if I’m honest, every day – violence in our streets.”