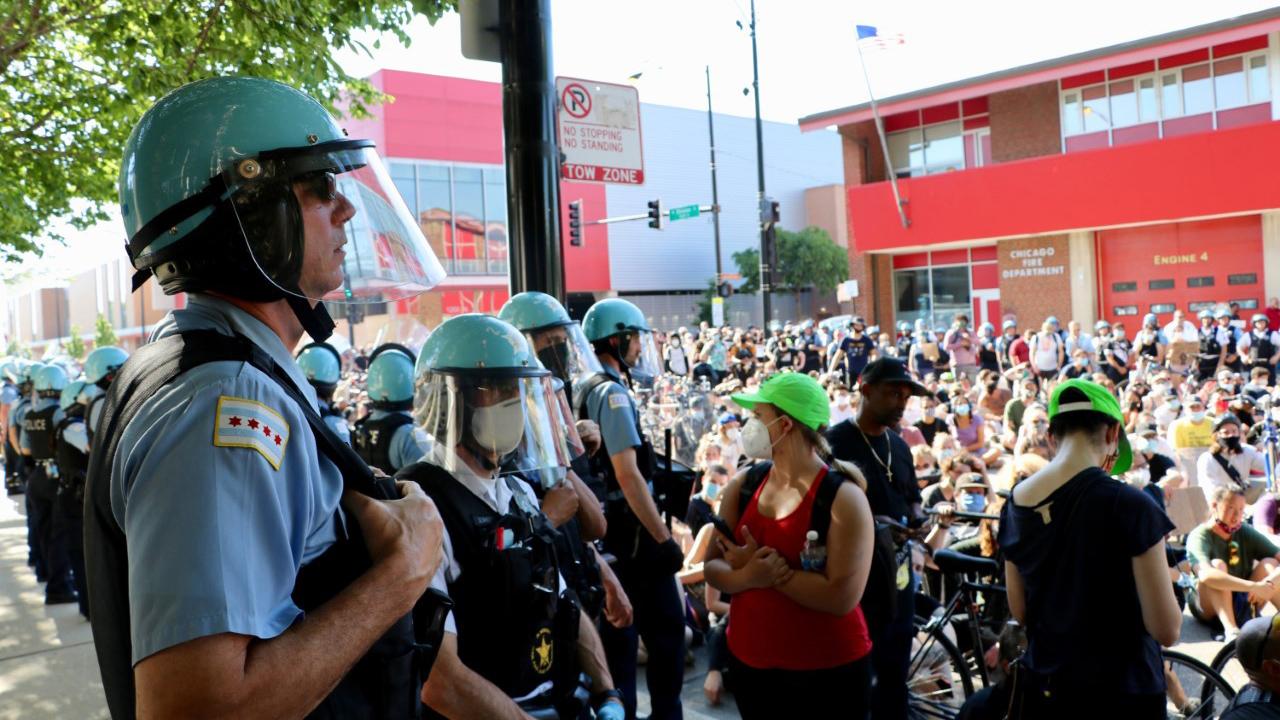 A line of Chicago police officers watch the demonstration at Division and Larrabee streets on June 2, 2020. Protesters assembled in front of a fire station and adjacent to the police department’s 18th District station. (Evan Garcia / WTTW News)

Mayor Lori Lightfoot on Friday called for the officer who greeted peaceful protesters with his middle fingers raised to be fired, along with those who concealed their names and badge numbers from the crowd.

Lightfoot said Chicago police Superintendent David Brown has the final decision on whether to terminate the officer whose identity is under investigation after being photographed by Block Club Chicago with two middle fingers raised while patrolling a Thursday protest.

Here's a clearer photo of the officer pic.twitter.com/W9APOtT28b

“In my view, they forfeited their right to be Chicago police officers,” Lightfoot said.

Lightfoot called for the officer who made the vulgar gesture to be stripped of his police powers and for termination proceedings to begin “immediately.”

“We will not tolerate that kind of abusive, offensive conduct on the part of police officers, period,” Lightfoot said.

It is exceedingly difficult to fire a police officer in Chicago. Any recommendation by the superintendent to fire an officer must be upheld by the Chicago Police Board. That decision can be challenged in court.

Lightfoot said that all 13,400 sworn officers should not be blamed for the actions of a few.

“We have seen a few (officers) who dishonored their badge, and they will be dealt with accordingly,” Lightfoot said. “I don’t want to paint with such a broad brush.”

The officers’ actions at the North Side protest came hours after Lightfoot again praised the conduct of the officers during the unrest sparked by the death of George Floyd in the custody of Minneapolis police, saying they had shown “great restraint” in dealing with protesters.

Lightfoot did not directly answer a question from WTTW News about how it would be possible for her administration to reform the police department if officers blatantly disregard department policy.

The Chicago Police Department is under the oversight of U.S. District Court Judge Robert Dow after a 2017 investigation by the Department of Justice found Chicago officers routinely violated the rights of black and Latino Chicagoans. The investigation was ordered after a white Chicago police officer shot Laquan McDonald, a black teenager, 16 times, causing an outcry.

On Friday morning, independent monitor Maggie Hickey told Dow that she planned to investigate the conduct of Chicago police officers during the protests and violence that began Saturday night and continued for several days.

The mayor’s office said in a statement she welcomed the oversight.

“Since the onset of these events, Mayor Lightfoot and Superintendent Brown have been unequivocally resolute that police misconduct of any kind will not be tolerated and those found committing wrongdoing will be held fully accountable,” Lightfoot said. “Just as the overwhelming majority of protests remained peaceful this week, the vast majority of officers followed their training and supervisor direction during these difficult times. Nonetheless, we will continue to vigorously investigate all reports of excessive force arising from this week.”