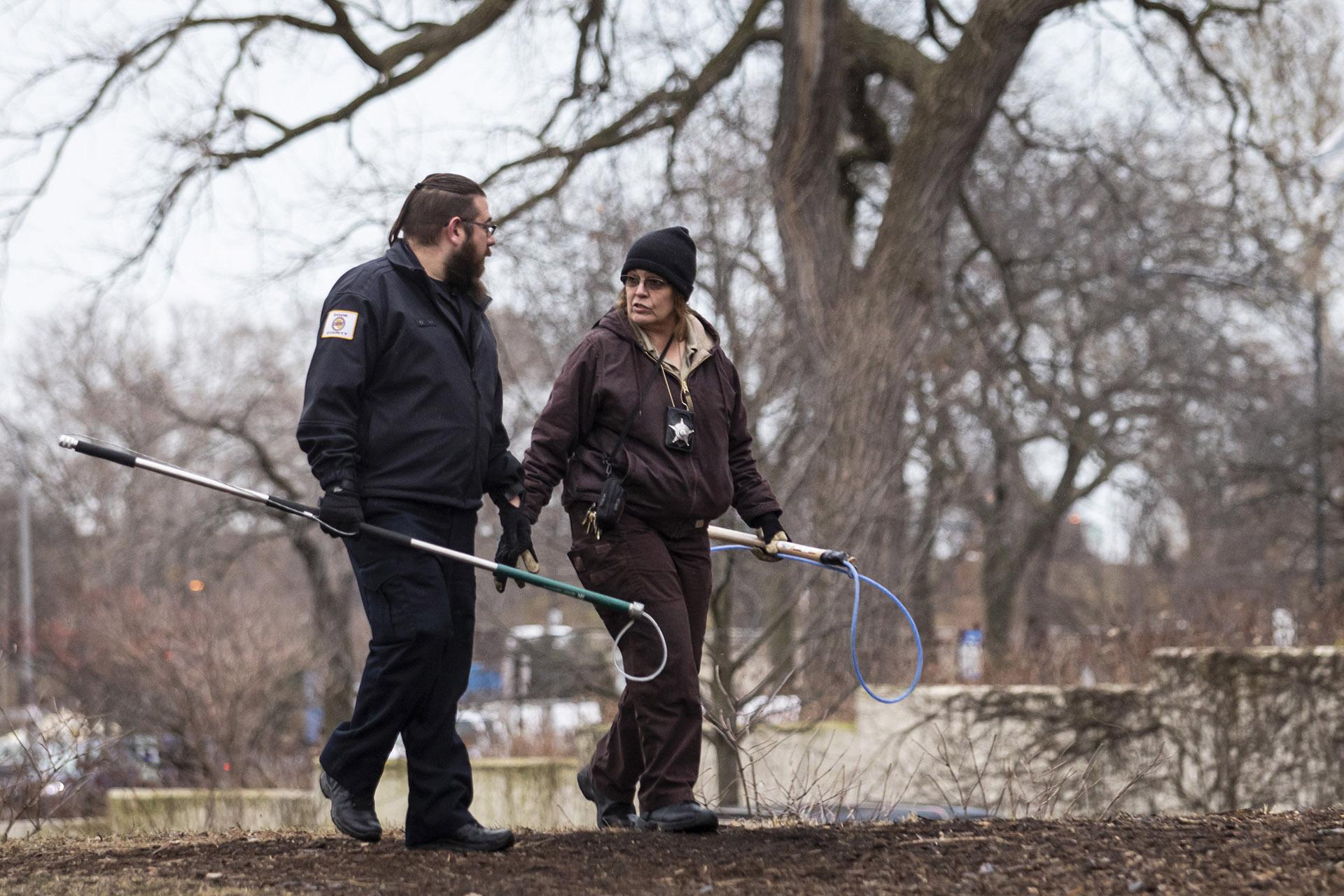 CHICAGO (AP) — Authorities on the hunt for coyotes in downtown Chicago after two reported attacks, including one where passersby said they had to pull a wild canine off of a 6-year-old boy who was bitten in the head, captured one animal Thursday night on the city’s North Side.

The reported attacks come amid an increase in sightings of coyotes in the nation’s third-largest city, including one in the city’s Lincoln Park neighborhood that briefly prompted the lockdown of two schools on Thursday. Neither the boy nor a man who showed up at a hospital with what he said was a coyote bite suffered life-threatening injuries.

Officials were confident the animal that attacked the boy was a coyote, based on witness interviews, Kelley Gandurski, executive director of the Chicago Animal Care and Control, told reporters.

If true, it would mark the first time in the state that a coyote has attacked a human, according to a wildlife biologist with the Urban Coyote Research Project.

“The last several times that this occurred, people reported the same thing, that they were bitten by a coyote, and days and weeks later it turned out through DNA analysis of the victim’s clothing it was, in fact, dogs and not coyotes,” said Chris  Anchor, who also works for the Forest Preserve District of Cook County, where Chicago is located.

The 6-year-old was attacked Wednesday while outside the Peggy Notebaert Nature Museum in Lincoln Park. Gandurski said the animal may have been surprised by the boy as the child ran along a path.

Two DePaul University track team members were running nearby when the coyote attacked the boy and they helped kick the animal away, according to WBBM-TV.

“We just acted. Went over there as fast as we could. Knew something was wrong,” DePaul sophomore Ryan Taylor told the television station. “There was an open CTA bus there. I told him to get on the bus in case the coyote tries to come back for something else.”

DePaul sophomore Dominic Bruce added: “I was just trying to make him happy. I told him you’ll have quite the story for story time when you go back to school.

Later Wednesday, a man walked into the emergency room at Northwestern Memorial Hospital with a scratch on his behind, police said. He told police a coyote bit him, but Gandurski could not confirm his account because her staff had not yet interviewed him.

The animal captured on the city’s North Side was chased by police and animal control officials over several city blocks and finally captured near an intersection just after 10 p.m. Thursday, according to WMAQ-TV.

Video showed the animal being loaded into an Animal Care and Control van after it was apparently shot with a tranquilizer: It was not immediately clear if the animal is connected to either of the reported attacks.

While coyotes don’t usually bite humans, there have been confirmed minor attacks in other U.S. cities, Stan Gehrt, a wildlife ecology professor at Ohio State University who helped launch the Urban Coyote Research Project with Anchor in 2000.

Gandurski said reports of coyote sightings in the city have remained fairly consistent in recent years, but the recent increase may be because of cold weather and a lack of food.

Anchor, who monitors the movements of hundreds of coyotes in the region who have been fitted with electronic collars, said it doesn’t mean more of the animals are in Chicago. Instead, said Anchor, coyotes may have changed their behavior in ways that make them more visible.

“They are very smart and when they realize there is nothing to fear from humans because they are not trapped, they begin to ignore humans,” he said.

Coyotes are adaptable. In Chicago, where the animals have been living for decades after following train tracks and other routes in search of food, they don’t just make their dens in parks and nature preserves, but in nooks and crannies around the city, he said. They will eat “whatever is available,” from small mammals and dead birds to fruit and insects, Anchor added.

Chicago Animal Care and Control urged residents to not leave pets unattended outside and to secure their garbage.

Gandurski said city and county animal control workers, as well as police and other agencies are taking part in the search for the coyote that attacked the boy. If captured, the animal will likely be relocated outside the city, she said.

Dr. Tom Wake, the interim administrator of the Cook County Animal and Rabies Control, said the animal would first be tested for rabies, though he noted it’s unlikely it would have that disease.

“There has not been a case of rabies in any other animal except bats since 1954 in Cook County,” he said.