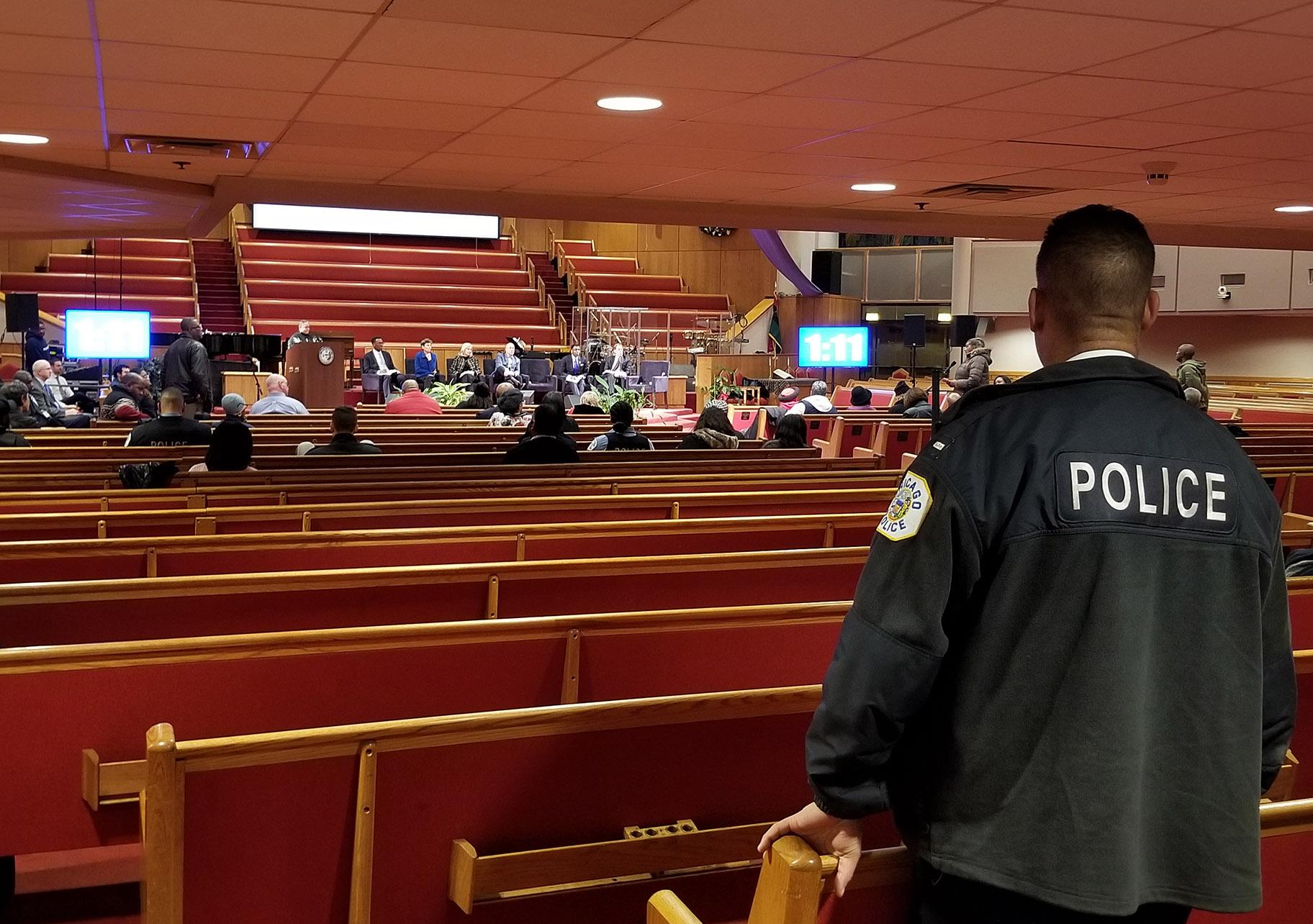 A Chicago police officer looks on during Monday’s police board listening session at the Trinity United Church of Christ. (Matt Masterson / WTTW News)

A “people person.” Someone who is able to build relationships and understand the various neighborhoods throughout the city of Chicago. A person who can demonstrate “actual honesty and transparency” on a daily basis.

The event, at Trinity United Church of Christ in the Washington Heights neighborhood, marked the first of three community listening sessions the police board will hold this week as it continues its search for a new superintendent.

“Our perspective is going to be largely influenced by your perspective,” board President Ghian Foreman said, adding that the sessions weren’t meant to lodge complaints about what’s wrong with the department, but rather hear what attributes residents want in the next top cop. “I think it’s very important that we get to hear voices from everyone.”

The name of former top cop Eddie Johnson came up seldomly during the meeting, but several speakers were critical of the now-fired superintendent and the way he was initially selected for the position.

Foreman said that in 2016, the last time the board went through this process, it received 40 applications. Nine of those applicants were interviewed and ultimately three names were submitted as the finalists to then-Mayor Rahm Emanuel.

But Emanuel eschewed those names and instead appointed Johnson, who had not applied, to replace Garry McCarthy, who was fired days after the release of the Laquan McDonald shooting video in 2015.

That search was led by Emanuel’s eventual successor Lori Lightfoot. Foreman said he’s been assured by Lightfoot that this time the selection process “will work as it’s intended to work.”

Still, some speakers were skeptical about how the selection process could play out.

“We want to make sure this process isn’t a dog and pony show,” said Eric Russell, an activist with the Tree of Life Justice League, “because the mayor isn’t the only one who doesn’t like being lied to.”

The board began its search last month after Johnson, 59, announced he’d be retiring at the end of 2019. But weeks later, Johnson was instead fired by Lightfoot, who accused him of lying to her about an October incident in which he was found asleep in his car after having multiple drinks.

Johnson was reportedly seen at Ceres Café downtown for hours drinking with a female officer who was a member of his security team. When officers found him in his car later that night, Johnson flashed his superintendent’s badge and drove off, according to the Chicago Tribune.

Days after his termination as superintendent, Johnson officially retired from the department. He also issued a statement last week defending himself and claiming he “did not intentionally mislead or deceive” Lightfoot or the public. An investigation led by the city inspector general into the incident is ongoing.

Speakers on Monday said they want a new police leader who has experience working with communities of color and can restore trust with city residents after the high-profile police shootings of McDonald and Rekia Boyd. They also want an additional focus on mental health training within the CPD.

But they were divided about where that person should come from. Some want a superintendent from outside Chicago because they believe there’s too much corruption in the current department. But more believe the perfect candidate has to be from Chicago, someone who rose through the ranks, because only they can truly understand the city.

“I also believe that the next superintendent should come from within,” victims advocate Dawn Valenti said. “I believe that people that are in the police department that have been police officers for years and have worked hard, I believe they deserve a chance at that title … Chicago is very territorial. We don’t like outsiders.”