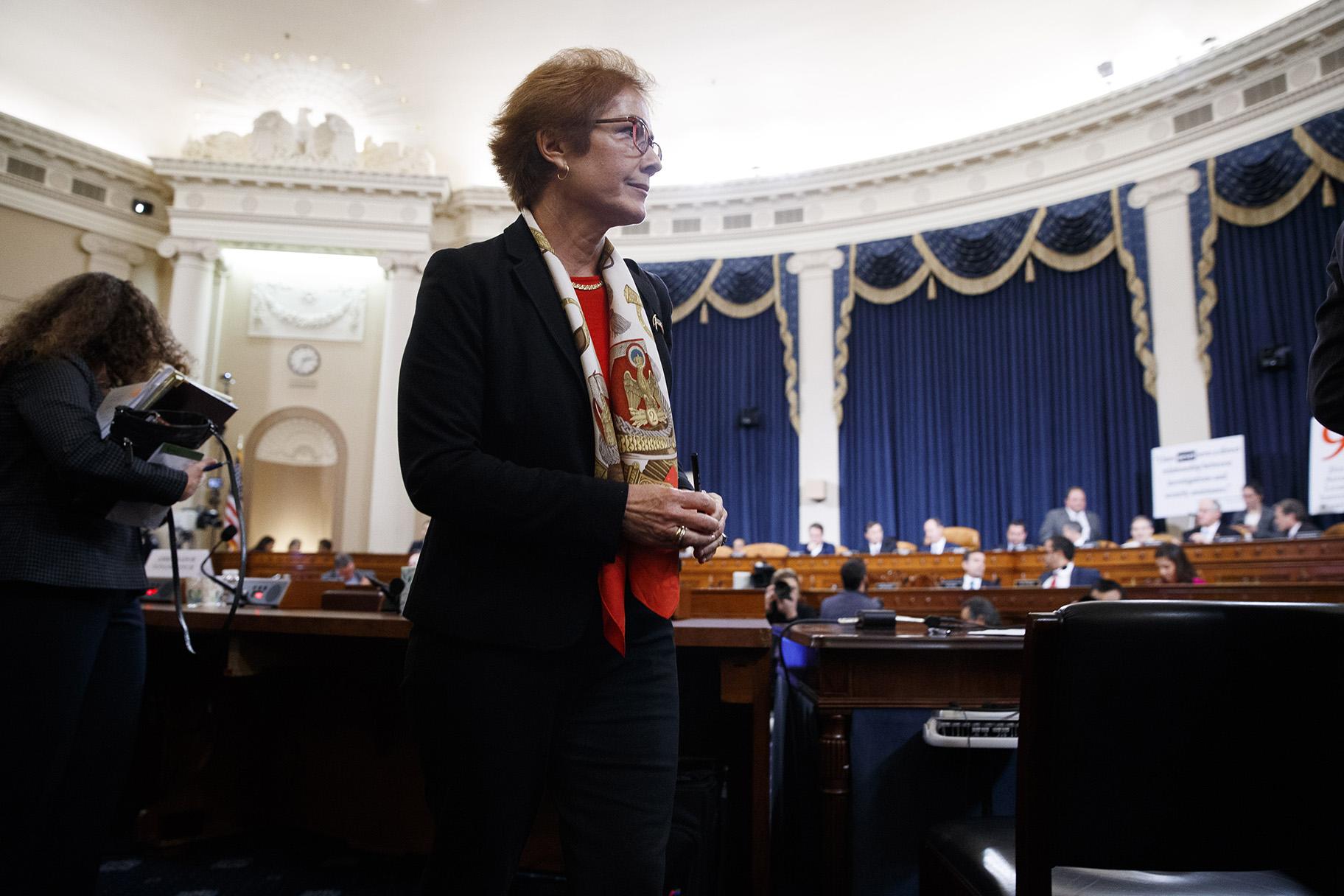 Former U.S. Ambassador to Ukraine Marie Yovanovitch gets up during a break in testimony before the House Intelligence Committee, Friday, Nov. 15, 2019, on Capitol Hill in Washington. (AP Photo / Jacquelyn Martin)

NEW YORK (AP) — Former Ukrainian Ambassador Marie Yovanovitch’s impeachment testimony on Friday spotlighted the role of conservative media in her downfall and the chilling reminder that she remains a social media target.

The ousted ambassador recalled a series of articles by reporter John Solomon, writing for The Hill newspaper in March, that launched a campaign to discredit her when they were disseminated through tweets by President Donald Trump, his son Donald Jr., and Fox News Channel. Solomon, a former reporter for The Associated Press and Washington Post, now reports for his own website.

In March, Solomon reported that Ukraine’s then prosecutor general, Yuriy Lutsenko, said Yovanovitch had given him a list of people who should not be prosecuted for crimes, and that she was bad-mouthing President Trump behind the scenes.

In testimony on Friday, Yovanovitch denied those claims and talked about the impact it had on her that the stories were being spread.

“I was worried that these attacks were being repeated by the president himself and his son,” she said. She said that colleagues in the State Department thought they were ridiculous, but that she could not get the strong statement of support that she wanted.

Solomon said Friday that “I stand by each and every one of the columns that I wrote” and that they were carefully vetted by lawyers and editors at The Hill. He said multiple witnesses confirmed his reporting that the U.S. embassy applied pressure not to prosecute certain individuals.

Solomon said his reporting on Ukraine was spurred by questions he had about former Vice President Joe Biden’s son Hunter and his involvement in a Ukrainian company.

One of Solomon’s earliest articles on the topic, published by The Hill in March, alleged evidence of a “Ukrainian plot to help Clinton.” It has since been shared, reacted to or commented on by Facebook users nearly 100,000 times, according to data from Facebook-owned CrowdTangle.

While Fox News Channel host Sean Hannity’s role received tangential attention on Friday, he has said that he only mentioned Yovanovitch “a few times in passing” on his top-rated show, a pillar in conservative media. Hannity has also denied earlier testimony from diplomat George Kent that the State Department applied pressure on Hannity to back off covering Solomon’s allegations.

The most riveting part of Yovanovitch’s appearance Friday came when Adam Schiff, chairman of the committee conducting the hearing, asked the former ambassador to react to a tweet that President Trump had sent about her while she was testifying. Trump wrote that “everywhere Marie Yovanovitch went turned bad.”

“I can’t speak to what the president is trying to do, but the effect is to be intimidating,” she said.

Minutes after Trump’s tweet, his followers took up arms. “I hired Donald Trump to fire people like Yovanovitch,” read a message from the Twitter account under the name Cari Kelemen, which frequently posts pro-Trump content. Kelemen’s tweet appeared to be the first boasting the slogan and was shared 6,000 times by the close of the hearing.

An email sent to Kelemen was not immediately returned.

Donald Trump Jr. echoed the tweet by writing that America hired his father “to fire people like the first three witnesses we’ve seen. Career government bureaucrats and nothing more.”

Despite the online effort to downplay Yovanovitch’s testimony on Friday, Fox News Channel newsmen Bret Baier and Chris Wallace testified to its power. Baier said the hearing “turned on a dime” when Trump tweeted about her, enabling Schiff to characterize it as intimidating a witness.

“If you are not moved ... by the testimony of Marie Yovanovitch today, you don’t have a pulse,” Wallace said.

He said that Republicans didn’t present any evidence to counter her contentions that stories spread in conservative media to smear her.

“Republicans have not been able to make the case at all that she was a bad actor,” he said.