WASHINGTON (AP) — Wednesday’s start of public impeachment hearings in Congress marked the first time that the American public could watch and listen to the witnesses whose testimony is at the core of the Democrats’ investigation.

In several hours of testimony, punctuated by occasional bickering among lawmakers, some memorable moments emerged.

Some key takeaways from the first public witnesses, George Kent and William Taylor:

Hearings like this one can be scripted affairs. But there was an early surprise.

Taylor, the top U.S. diplomat in Ukraine, revealed for the first time that his staff members overheard President Donald Trump speaking on the phone to another diplomat about investigations.

Taylor said some of his staff members were at a restaurant with Gordon Sondland, the U.S. ambassador to the European Union, the day after the July 25 call between Trump and Ukraine's newly elected president, Volodymyr Zelenskiy.

Sondland used his cellphone to call Trump from the restaurant, and the staff members could hear Trump on the phone asking about “the investigations.” Taylor took that to mean investigations into former Vice President Joe Biden, his son Hunter and the Burisma Group, the Ukrainian firm that had hired Hunter Biden as a director in 2014, he told lawmakers.

Taylor said he only learned about the call last Friday and didn’t know about it when he appeared for a closed-door deposition with House investigators conducting the impeachment inquiry.

IS IT BRIBERY OR A QUID PRO QUO?

The impeachment inquiry in many respects is about controlling the narrative. On Wednesday, Democrats seemed to start to frame Trump’s actions as possible “bribery” and “extortion” rather than emphasizing a “quid pro quo.”

House Intelligence Committee Chairman Adam Schiff, D-Calif., introduced the notion of bribery when he criticized the acting White House chief of staff, Mick Mulvaney, for saying that people concerned about Trump’s requests that Ukraine do political investigations should “get over it,” and that there is political influence in all foreign policy.

If the investigation finds that Trump “sought to condition, coerce, extort, or bribe an ally into conducting investigations to aid his reelection campaign and did so by withholding official acts — a White House meeting or hundreds of millions of dollars of needed military aid — must we simply get over it?’’ Schiff asked.

Later, Rep. Joaquin Castro, D-Texas, questioned the witnesses about the idea of bribery and noted that merely attempting the act could be considered a crime. 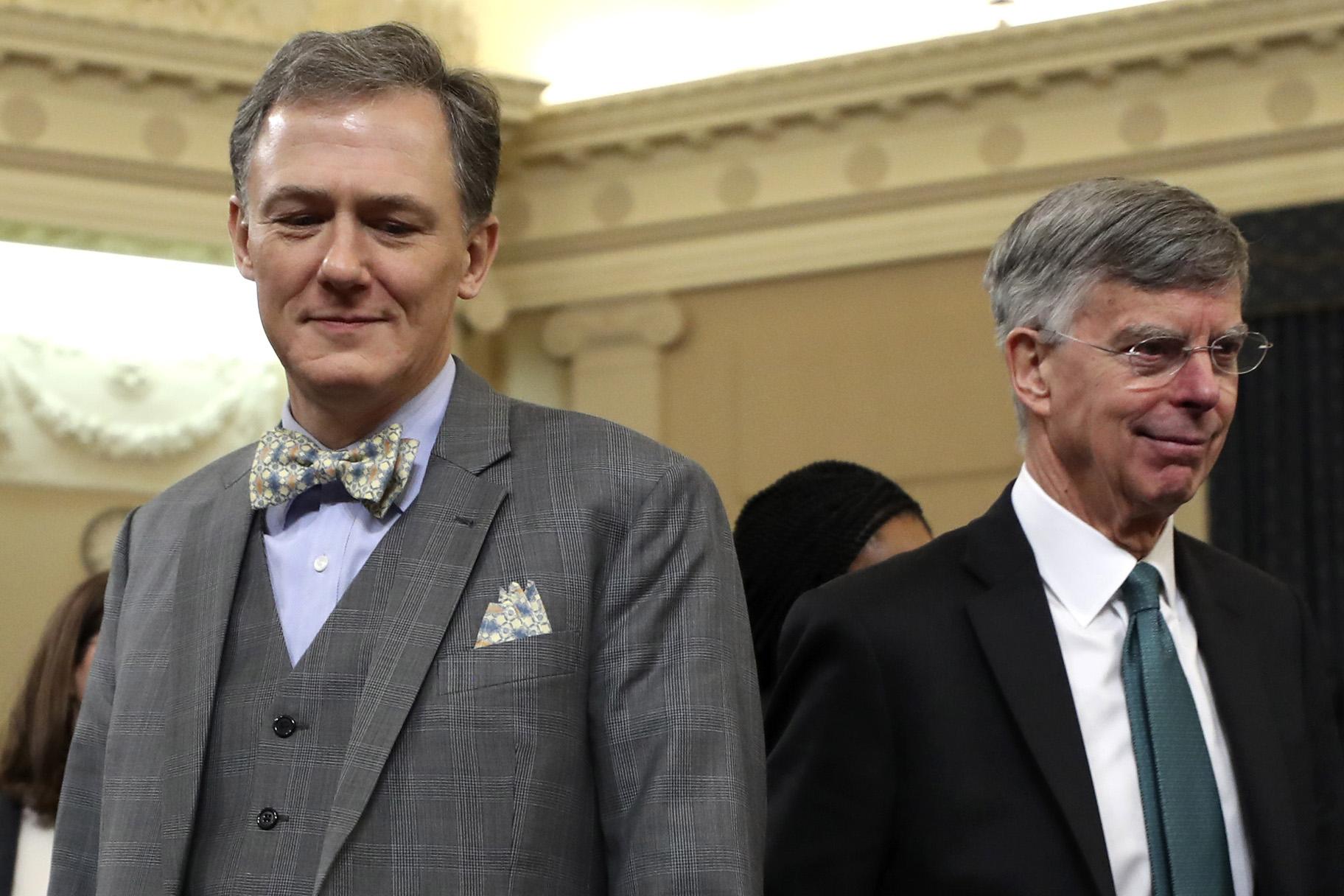 Top U.S. diplomat in Ukraine William Taylor, and career Foreign Service officer George Kent, left, walk back from a break as they testify before the House Intelligence Committee on Capitol Hill in Washington, Wednesday, Nov. 13, 2019, during the first public impeachment hearing of President Donald Trump’s efforts to tie U.S. aid for Ukraine to investigations of his political opponents. (AP Photo / Andrew Harnik)

Republicans dismissed the testimony of the witnesses as mere “hearsay.” They said the witnesses didn’t provide firsthand knowledge of suspected back-door dealings on Ukraine and did not speak directly with Trump.

“We’ve got six people having four conversations in one sentence, and this is where you told me you got your clear understanding,” Jordan said.

Taylor and Kent believed their understanding of the phone calls, security aid and other issues were sound, gathered from their own knowledge and conversations with trusted staff.

And Democrats had another argument for Republicans: Trump could clear up the ambiguity by allowing those with firsthand knowledge to testify, such as Mulvaney, Trump’s personal attorney Rudy Giuliani and former national security adviser John Bolton.

The hearing also had elements of misdirection. Names familiar during special counsel Robert Mueller’s Russia investigation, but not particularly relevant to the impeachment inquiry, received attention during questioning from some GOP lawmakers and the lawyer who was representing their interests.

There was a reference by Rep. Devin Nunes, R-Calif., to the “Steele dossier” — a compilation of opposition research against candidate Trump compiled by a former British spy during the 2016 presidential campaign.

Also invoked were discredited allegations that Ukraine interfered in the most recent presidential election. Paul Manafort, the president’s former campaign chairman who did lucrative political consulting work in Ukraine, was cited, too. Manafort was sentenced to more than seven years in prison, in part for financial crimes arising from his Ukraine work.

Taylor is a Vietnam War veteran and West Point graduate. Kent is a career foreign service officer whose family has served the country for generations.

Both referenced serving under presidents of both parties, aiming to preempt Republican attacks on them as political partisans. That didn’t stop Nunes from deriding them as being part of a smear campaign from within the civil service.

Taylor capped his opening statement with an ode to how Americans feel in their best moments about their country: “less concerned about what language we speak, what religion if any we practice, where our parents and grandparents came from; more concerned about building a new country.”

Kent singled out by first name other impeachment-related witnesses who were born abroad, likening them to 20th-century national security policy: Henry Kissinger and Zbigniew Brzezinski, both immigrants.

Trump to Release April Call with Ukraine Leader This Week