Video: Steven Heyman, professor of law at the Kent-Chicago School of Law joins us to discuss the latest on the House’s impeachment inquiry resolution.

WASHINGTON (AP) — Democrats swept a rules package for their impeachment probe of President Donald Trump through a divided House on Thursday, as the chamber’s first vote on the investigation highlighted the partisan breach the issue has only deepened.

By 232-196, lawmakers approved the procedures they’ll follow as weeks of closed-door interviews with witnesses evolve into public committee hearings and — almost certainly — votes on whether the House should recommend Trump’s removal.

All voting Republicans opposed the package. Every voting Democrat but two supported it.

Underscoring the pressure Trump has heaped on his party’s lawmakers, he tweeted, “Now is the time for Republicans to stand together and defend the leader of their party against these smears.”

Yet the roll call also accentuated how Democrats have rallied behind the impeachment inquiry after House Speaker Nancy Pelosi spent months urging caution until evidence and public support had grown.

She and other Democratic leaders had feared a premature vote would wound the reelection prospects of dozens of their members, including freshmen and lawmakers from Trump-won districts or seats held previously by Republicans. But recent polls have shown voters’ growing receptivity to the investigation and, to a lesser degree, ousting Trump.

That and evidence that House investigators have amassed have helped unify Democrats, including those from GOP areas. Rep. Cindy Axne, D-Iowa, said she was supporting a pathway to giving “the American people the facts they deserve,” while Rep. Andy Kim, D-N.J., said voters warrant “the uninhibited truth.”

Yet Republicans were also buoyed by polling, which has shown that GOP voters stand unflinchingly behind Trump.

“The impeachment-obsessed Democrats just flushed their majority down the toilet,” said Michael McAdams, a spokesman for House Republicans’ campaign arm. 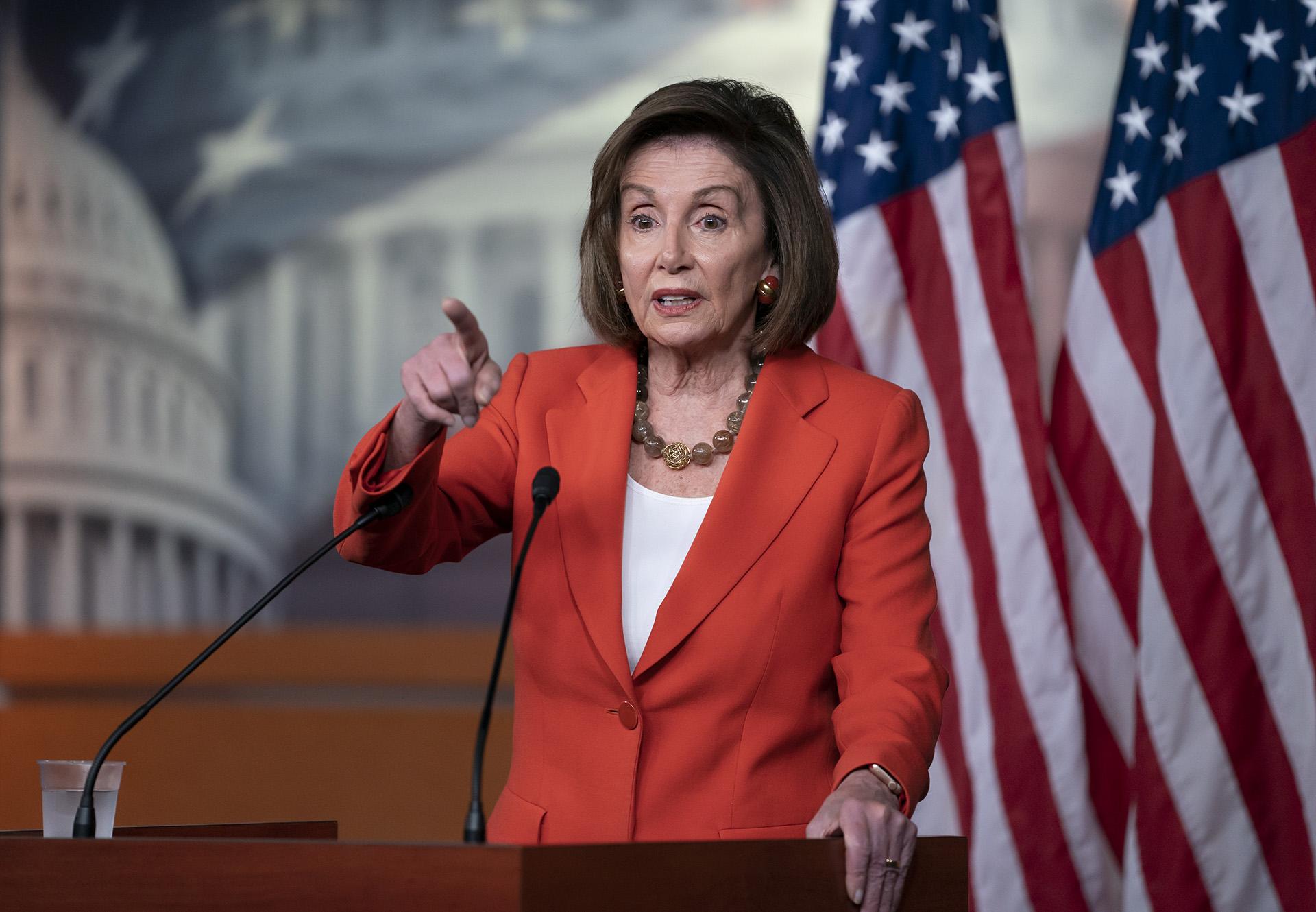 Speaker of the House Nancy Pelosi, D-Calif., talks to reporters just before the House vote on a resolution to formalize the impeachment investigation of President Donald Trump, in Washington, Thursday, Oct. 31, 2019. (AP Photo / J. Scott Applewhite)

Elsewhere at the Capitol on Thursday, three House panels led by the Intelligence Committee questioned their latest witness into the allegations that led to the impeachment inquiry: that Trump pressured Ukraine to produce dirt on his Democratic political rivals by withholding military aid and an Oval Office meeting craved by the country’s new president.

Tim Morrison, who stepped down from the National Security Council the day before his appearance, testified — still behind closed doors — that he saw nothing illegal in Trump’s phone call with the Ukrainian president that is at the center of the Democrat-led investigation.

Yet, Morrison also largely confirmed much of what William Taylor, the highest-ranking U.S. official in Ukraine, said in earlier, highly critical testimony about the call, which Taylor said he and Morrison discussed several times.

The Democrats are still waiting to hear if Morrison’s one-time boss, John Bolton, will testify. They have subpoenaed former national security adviser Bolton, who quit the administration after disagreements with Trump over his handling of Ukraine.

In the House inquiry vote, the only Democratic “no” votes were by Reps. Jeff Van  Drew, a New Jersey freshman, and veteran Collin Peterson of Minnesota, one of the House’s most conservative Democrats. Both are battling for reelection in Republican-leaning districts.

Also supporting the rules was independent Rep. Justin Amash of Michigan, who left the GOP this year after announcing he was open to considering Trump’s impeachment.

Thursday’s House debate was laced with high-minded appeals to defend the Constitution and Congress’ independence, as well as partisan taunts.

“What are we fighting for? Defending our democracy,” said Pelosi. She addressed lawmakers with a poster of the American flag beside her and opened her comments by reading from the preamble to the Constitution.

She also said the rules would let lawmakers decide whether to impeach Trump “based on the truth. I don’t know why the Republicans are afraid of the truth.”

But her counterpart, Minority Leader Kevin McCarthy of California cast the process as a skewed attempt to railroad a president whom Democrats have detested since before he took office.

“Democrats are trying to impeach the president because they are scared they cannot defeat him at the ballot box,” he said.

The House is at least weeks away from deciding whether to vote on actually impeaching Trump. If it does, the Senate would hold a trial on whether to remove him from office. That GOP-run chamber seems highly likely to keep him in the White House.

Rep. Devin Nunes, R-Calif., likened Democrats to a “cult,” accusing them of bouncing from “one outlandish conspiracy theory to another.” Rep. Maxine Waters, D-Calif., pointedly said she looked forward to Republicans “prioritizing country over party, just as we took an oath to do.”

Democrats said the procedures are similar to rules used during the impeachment proceedings of Presidents Richard Nixon and Bill Clinton.

Pelosi decided to have the vote following a GOP drumbeat that the inquiry was tainted because lawmakers hadn’t voted to formally commence the work. The rules direct House committees “to continue their ongoing investigations” of Trump.

Democrats hope Thursday’s vote will undercut GOP assertions that the process has been invalid. They’ve noted that there is no constitutional provision or House rule requiring such a vote.

The rules require the House Intelligence Committee — now leading the investigation — to issue a report and release transcripts of its closed-door interviews, which members of both parties have attended.

The Judiciary Committee would then decide whether to recommend that the House impeach Trump.

Republicans could only issue subpoenas for witnesses to appear if the committees holding the hearings approve them — in effect giving Democrats veto power.

Attorneys for Trump could participate in the Judiciary Committee proceedings. Democrats would retain leverage by empowering panel Chairman Jerrold Nadler, D-N.Y., to deny requests by Trump representatives to call witnesses if the White House continues to “unlawfully refuse” to provide testimony or documents Congress demands.

Trump Hoping to See US Economy Reopened by Easter Amid Virus 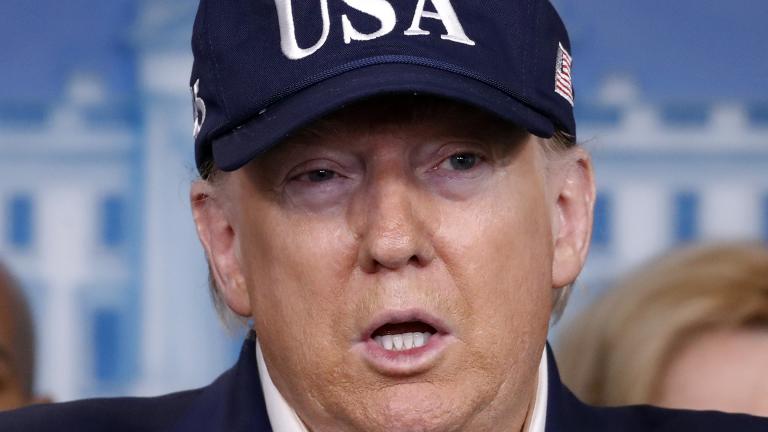