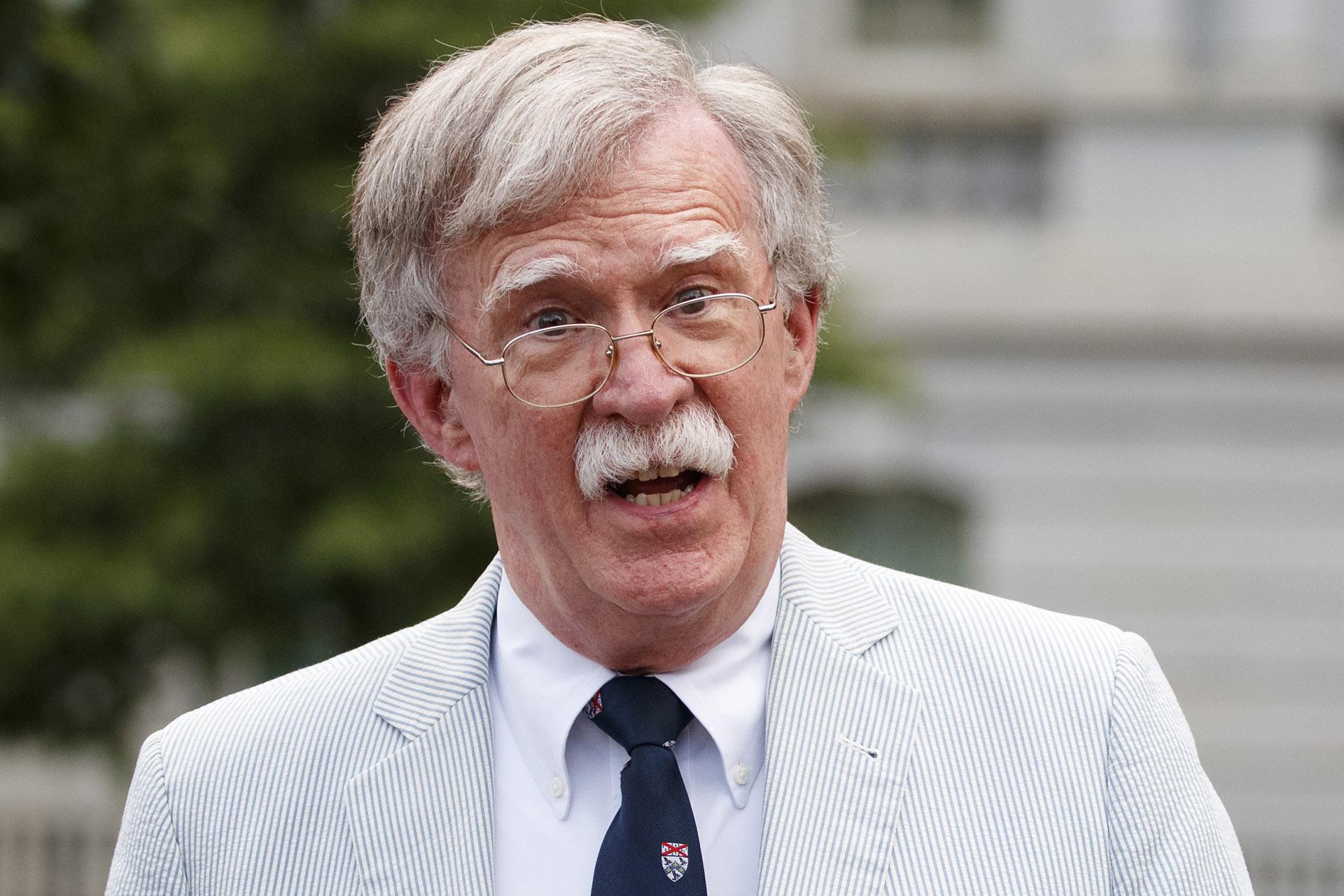 The testimony from Christopher Anderson makes clear that administration officials were concerned about Giuliani’s back-channel involvement in Ukraine policy, and his push for investigations of Democrats, even before the July 25 phone call between President Donald Trump and his Ukraine counterpart at the center of the House impeachment inquiry.

Anderson will describe a June meeting in which he said Bolton expressed support for the administration’s goals of strengthening energy cooperation between the U.S. and Ukraine and getting new Ukraine leader, Volodymyr Zelenskiy, to undertake anti-corruption reforms.

“However, he cautioned that Mr. Giuliani was a key voice with the president on Ukraine which could be an obstacle to increased White House engagement,” Anderson will say, according to a copy of his prepared remarks obtained by The Associated Press. Giuliani is Trump’s personal lawyer.

Another foreign service officer set to testify Wednesday, Catherine Croft, will say that during her time at the National Security Council, she received multiple phone calls from lobbyist Robert Livingston telling her that the-then ambassador to Ukraine, Marie Yovanovitch, should be fired.

Their testimony follows that of Alexander Vindman, an Army officer with the National Security Council who testified that he twice raised concerns over the administration’s push to have Ukraine investigate Democrats and Joe Biden.

Vindman, a lieutenant colonel who served in Iraq and later as a diplomat, was the first official to testify who actually heard Trump’s July 25 call with Zelenskiy. He reported his concerns to the NSC’s lead counsel.

Vindman also told investigators Tuesday that he tried to change the White House’s rough transcript of the call by filling in at least one of the omitted words, “Burisma,” a reference to the company linked to Biden and his son, according to people familiar with his testimony. But Vindman was unsuccessful.

His concerns, though, were far bigger than the transcript. And lawmakers said his failed effort to edit it didn’t significantly change their understanding of what transpired during Trump’s call that sparked the impeachment inquiry.

Vindman’s arrival in military blue, with medals, created a striking image at the Capitol as the impeachment inquiry reached deeper into the White House. He testified for more than 10 hours.

“I was concerned by the call,” Vindman said, according to prepared remarks . “I did not think it was proper to demand that a foreign government investigate a U.S. citizen, and I was worried about the implications for the U.S. government’s support of Ukraine.”

Vindman, a 20-year military officer, added to the mounting evidence from other witnesses — diplomats, defense and former administration officials — who are corroborating the initial whistleblower’s complaint against Trump and providing new details ahead of a House vote in the impeachment inquiry.

“That’s the story: There’s not like a new headline out of all of these,” said Rep. Tom Malinowski, D-N.J. “Every single witness, from their own vantage point, has corroborated the central facts of the story we’ve heard.”

The inquiry is looking into Trump’s call, in which he asked Zelenskiy for a “favor” — to investigate Democrats — that the Democrats say was a quid pro quo for military aid and could be an impeachable offense.

With the administration directing staff not to appear, Vindman was the first current White House official to testify before the impeachment panels. He was issued a subpoena to appear. 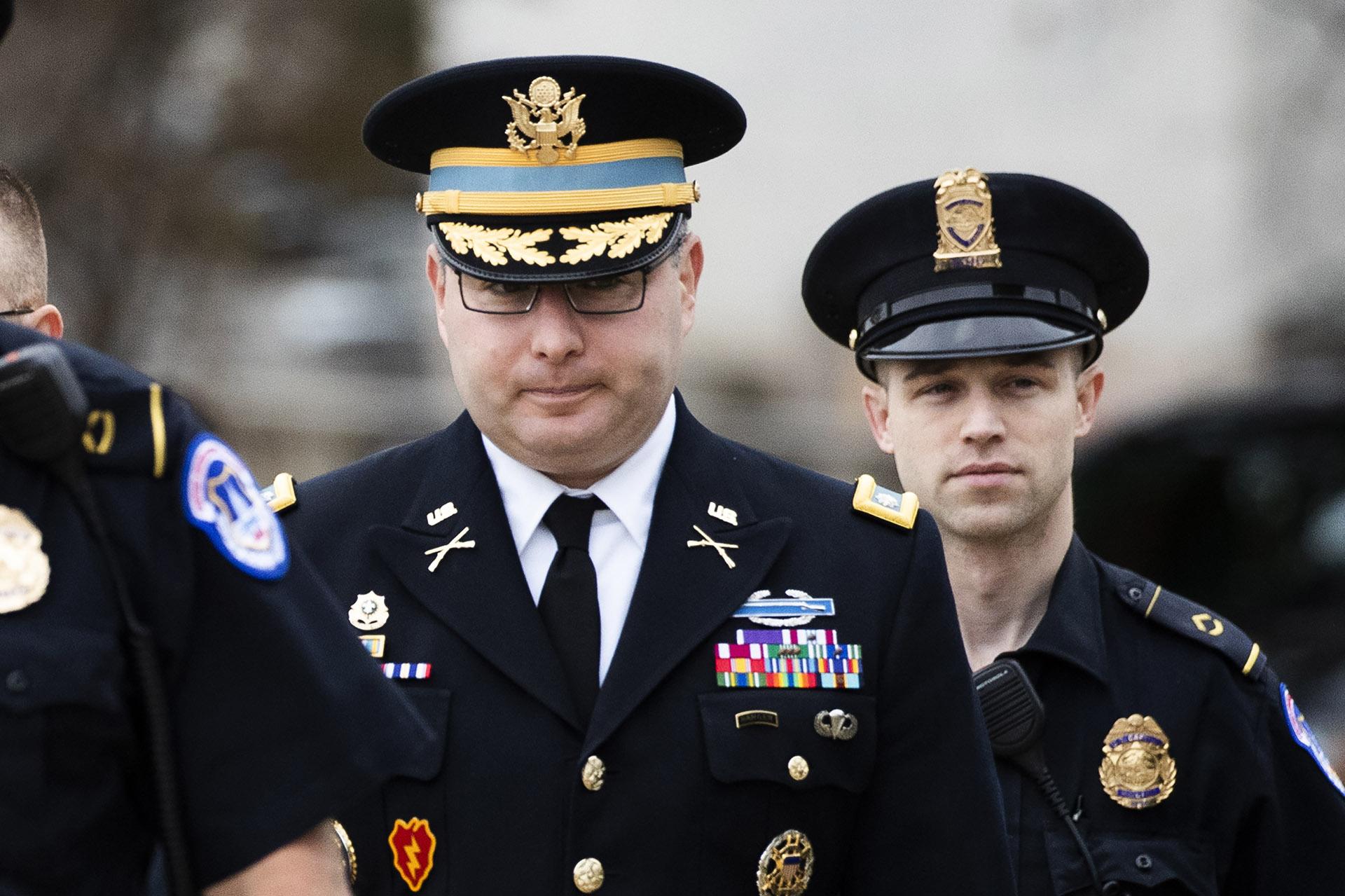 Army Lieutenant Colonel Alexander Vindman, a military officer at the National Security Council, center, arrives on Capitol Hill in Washington, Tuesday, Oct. 29, 2019, to appear before a House Committee on Foreign Affairs, Permanent Select Committee on Intelligence, and Committee on Oversight and Reform joint interview with the transcript to be part of the impeachment inquiry into President Donald Trump. (AP Photo / Manuel Balce Ceneta)

Some Trump allies, looking for ways to discredit Vindman, questioned the colonel’s loyalties because he was born in the region. But the line of attack was rejected by some Republicans, including Wyoming Rep. Liz Cheney, who said it was “shameful” to criticize his patriotism.

Sen. Mitt Romney, R-Utah, called the slams on Vindman “absurd, disgusting and way off the mark. This is a decorated American soldier, and he should be given the respect that his service to our country demands.”

The testimony came the day after Speaker Nancy Pelosi announced the House would vote on a resolution to set rules for public hearings and a possible vote on articles of impeachment.

Thursday’s vote would be the first on the impeachment inquiry and aims to nullify complaints from Trump and his allies that the process is illegitimate and unfair.

White House press secretary Stephanie Grisham said the resolution merely “confirms that House Democrats’ impeachment has been an illegitimate sham from the start as it lacked any proper authorization by a House vote.”

The session Tuesday grew contentious at times as House Republicans continued trying to unmask the still-anonymous whistleblower and call him or her to testify. Vindman said he is not the whistleblower and does not know who it is.

GOP Rep. Jim Jordan of Ohio acknowledged Republicans were trying to get Vindman to provide the names of others he spoke to after the July 25 phone call, in an effort to decide whom to call to testify. “He wouldn’t,” Jordan said.

Vindman testified that in spring of this year he became aware of “outside influencers” promoting a “false narrative of Ukraine” that undermined U.S. efforts, a reference in particular to Giuliani.

He first reported his concerns after a July 10 meeting in which U.S. Ambassador to the European Union Gordon Sondland stressed the importance of having Ukraine investigate the 2016 election as well as Burisma, a company linked to the family of Biden, a 2020 Democratic presidential candidate.

Vindman says he told Sondland that “his statements were inappropriate, that the request to investigate Biden and his son had nothing to do with national security, and that such investigations were not something the NSC was going to get involved in or push.”

That differs from the account of Sondland, a wealthy businessman who donated $1 million to Trump’s inauguration and testified before the impeachment investigators that no one from the NSC “ever expressed any concerns.” Sondland also testified that he did not realize any connection between Biden and Burisma.