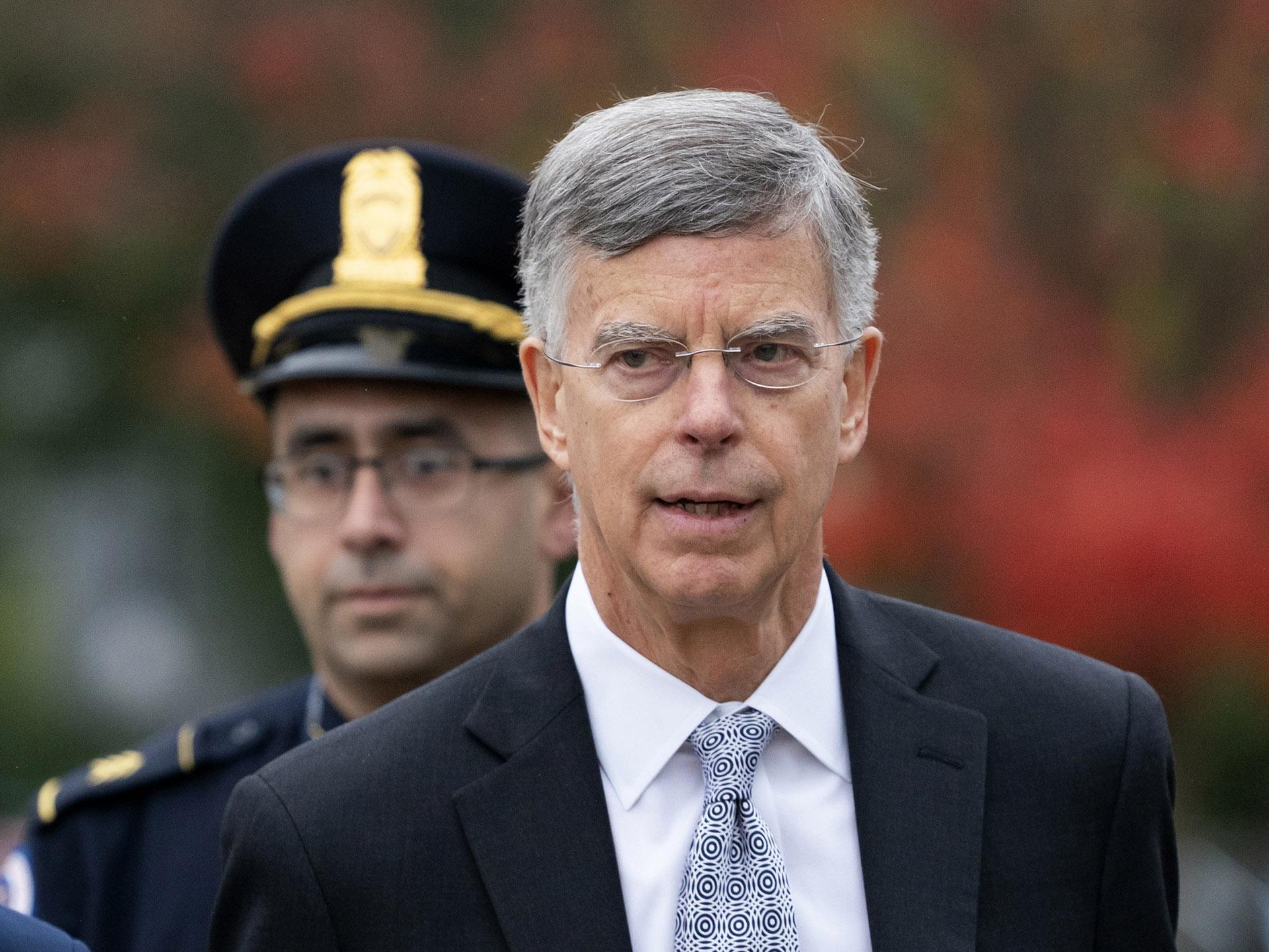 Ambassador William Taylor is escorted by U.S. Capitol Police as he arrives to testify before House committees as part of the Democrats’ impeachment investigation of President Donald Trump, at the Capitol in Washington, Tuesday, Oct. 22, 2019. (AP Photo / J. Scott Applewhite)

WASHINGTON (AP) — A top U.S. diplomat testified Tuesday that President Donald Trump was holding back military aid for Ukraine unless the country agreed to investigate Democrats and a company linked to Joe Biden’s family, providing lawmakers with a detailed new account of the quid pro quo central to the impeachment probe.

In a lengthy opening statement to House investigators obtained by The Associated Press, William Taylor described Trump's demand that “everything” President Volodymyr Zelenskiy wanted, including vital aid to counter Russia, hinged on making a public vow that Ukraine would investigate Democrats going back to the 2016 U.S. election as well as a company linked to the family of Trump’s potential 2020 Democratic rival.

Taylor testified that what he discovered in Kyiv was the Trump administration’s “irregular” back channel to foreign policy led by the president’s personal lawyer, Rudy Giuliani, and “ultimately alarming circumstances” that threatened to erode the United States’ relationship with a budding Eastern European ally facing Russian aggression.

In a date-by-date account, detailed across several pages, the seasoned diplomat who came out of retirement to take over as charge d’affaires at the embassy in Ukraine details his mounting concern as he realized Trump was trying to put the newly elected president of the young democracy “in a public box.”

“I sensed something odd,” he testified, describing a trio of Trump officials planning a call with Zelenskiy, including one, Ambassador Gordon Sondland, who wanted to make sure “no one was transcribing or monitoring” it.

Lawmakers who emerged after nearly 10 hours of the private deposition were stunned at Taylor’s account, which some Democrats said established a “direct line” to the quid pro quo at the center of the impeachment probe.

“It was shocking,” said Rep. Karen Bass, a California Democrat. “It was very clear that it was required — if you want the assistance, you have to make a public statement.”

She characterized it as “it’s this for that.”

Rep. Dina Titus, a Democrat from Nevada, said, “You can see how damning this is.”

Titus said, “This certainly makes it pretty clear what was going on. And it was a quid pro quo.”

The account reaches to the highest levels of the administration, drawing in Vice President Mike Pence and Trump’s acting chief of staff, Mick Mulvaney, and slices at the core of the Republican defense of the administration and the president’s insistence of no wrongdoing.

It’s illegal to seek or receive contributions of value from a foreign entity for a U.S. election.

“President Trump has done nothing wrong,” said White House press secretary Stephanie Grisham. “This is a coordinated smear campaign from far-left lawmakers and radical unelected bureaucrats waging war on the Constitution. There was no quid pro quo.”

Taylor’s appearance was among the most anticipated before House investigators because of a series of text messages with the other diplomats in which he called Trump’s attempt to hold back military aid to Ukraine “crazy.”

His testimony opens a new front in the impeachment inquiry, and it calls into question the account from Sondland, the U.S. ambassador to the European Union, who told Congress last week that he did not fully remember some details of the events and was initially unaware that the gas company Burisma was tied to the Bidens.

Taylor told lawmakers that Sondland, a wealthy businessman who donated $1 million to Trump’s inauguration, was aware of the demands and later admitted he made a mistake by telling the Ukrainians that military assistance was not contingent on agreeing to Trump’s requests.

“In fact, Ambassador Sondland said, ‘everything’ was dependent on such an announcement, including the security assistance,” Taylor recalled.

“Ambassador Sondland told me that President Trump had told him that he wants President Zelenskyy to state publicly that Ukraine will investigate Burisma and alleged Ukrainian interference in the 2016 U.S. election,” Taylor said about a Sept. 1 phone call between them.

The retired diplomat, a former Army officer, had been serving as executive vice president at the U.S. Institute of Peace, a nonpartisan think tank founded by Congress, when he was appointed to run the embassy in Kyiv after Trump suddenly recalled Ambassador Maria Yovanovitch.

Taylor testified that he had concerns about taking over the post under those circumstances, but she urged him to go “for policy reasons and for the morale of the embassy.” He had served as U.S. ambassador to Ukraine from 2006 to 2009.

Lawmakers described the career civil servant’s delivery as credible and consistent, as he answered hours of questions from Democrats and Republicans, drawing silence in the room as lawmakers exchanged glances.

Taylor testified that he “sat in astonishment” on a July 18 call in which a White House budget official said that Trump had relayed a message through Mulvaney that the aid should be withheld.

A month later, his concerns had so deepened that he was preparing to resign. Sensing the U.S. policy toward Ukraine has shifted, he described an Aug. 22 phone call with Tim Morrison, a Russia adviser at the White House, who told him, the “president doesn’t want to provide any assistance at all.”

“That was extremely troubling to me,” Taylor said.

Taylor's description of Trump’s position is in sharp contrast to how the president has characterized it. Trump has said many times that there was no quid pro quo, though Mulvaney contradicted that last week. Mulvaney later tried to walk back his remarks.

“I do not know how you would listen to today’s testimony from Ambassador Taylor and come to any other (conclusion) except that the president abused his power and withheld foreign aid,” she said.

The impeachment probe was sparked by a whistleblower’s complaint of a July call. In that call, Trump told Zelenskiy he wanted “a favor,” which the White House later acknowledged in a rough transcript of the conversation was Trump’s desire for Ukraine to investigate the Democratic National Committee’s email hack in 2016 as well as the Ukrainian gas company Burisma tied to Biden’s family.