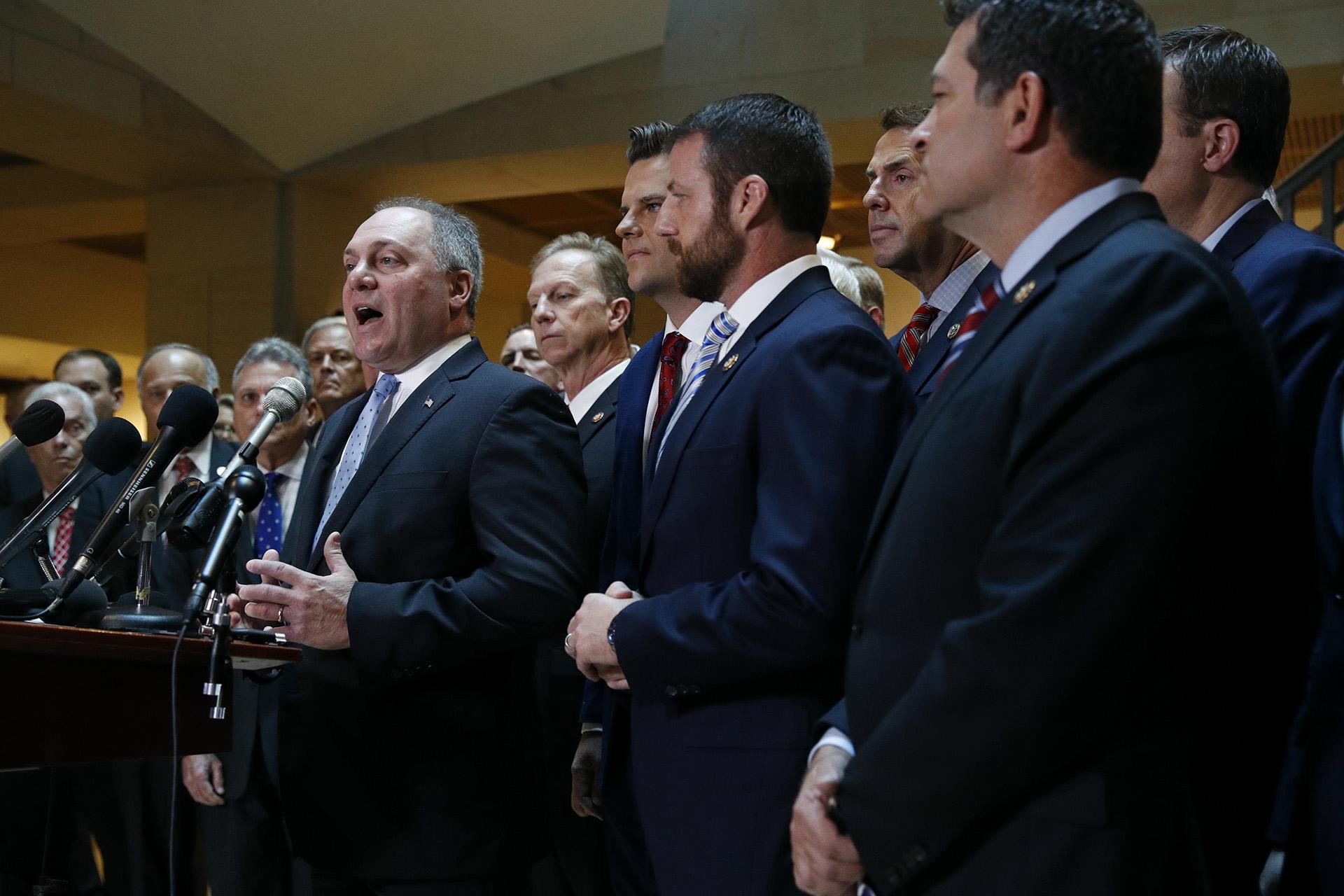 WASHINGTON (AP) — Republicans briefly brought the Democrat-led impeachment investigation to a halt when around two dozen GOP House members stormed into a closed-door deposition with a Defense Department official. Democrats said the move compromised national security because some of the Republicans took electronic devices into a secure room.

The protest by Republican lawmakers on Wednesday captured national attention, drawing the focus away from the testimony of a top U.S. diplomat who told lawmakers just a day earlier that he was told President Donald Trump was withholding military aid from Ukraine unless the country’s president pledged to investigate Democrats.

The maneuver delayed a deposition with Laura Cooper, a senior Defense Department official who oversees Ukraine policy, until midafternoon. The interview began roughly five hours behind schedule, after a security check by Capitol officials, and ended after roughly four hours.

“The members have just had it, and they want to be able to see and represent their constituents and find out what's going on,” said Ohio Rep. Jim Jordan, the top Republican on the House Oversight and Reform panel. That committee is one of three leading the investigation, and its members are allowed into the closed-door hearings.

Lawmakers described a chaotic scene. Rep. Debbie Wasserman Schultz, D-Fla., said she had just walked into the room when the Republican lawmakers blew past Capitol police officers and Democratic staffers. The staff member who was checking identification at the entrance was “basically overcome” by the Republicans, she said.

“Literally some of them were just screaming about the president and what we’re doing to him and that we have nothing and just all things that were supportive of the president,” Wasserman Schultz said.

Later when the deposition began, Cooper answered questions from lawmakers and staffers in response to a subpoena, an official working on the impeachment inquiry said. She explained to lawmakers the process of distributing military aid and was asked whether the appropriate steps were followed on Ukraine, according to a person familiar with the interview.

The official working on the impeachment inquiry and the person familiar with the interview spoke on the condition of anonymity to discuss the closed-door testimony.

“The president’s allies in Congress are trying to make it even more difficult for these witnesses to cooperate,” said Adam Schiff, the chairman of the House intelligence committee.

Democrats deny that Republicans are being treated unfairly, noting they have had equal time to question witnesses and full access to the meetings. Schiff says closed-door hearings are necessary to prevent witnesses from concealing the truth and has promised to release the transcripts when it will not affect the investigation.

They also said the Republicans — several of whom do not sit on one of the three committees — compromised security at Wednesday’s closed-door deposition. The interviews are being held in what is called a Sensitive Compartmented Information Facility, or SCIF, which is a secure room where members can hear classified information.

Several lawmakers leaving the facility said that some of the Republicans had their cellphones, even though electronics are not allowed. All members of Congress are familiar with the protocol of the SCIF, since they are often invited to classified briefings, and there are several such rooms around the Capitol.

Several Republicans appeared to be tweeting from the secure room. North Carolina Rep. Mark Walker tweeted: “UPDATE: We are in the SCIF and every GOP Member is quietly listening.”

The “unprecedented breach of security raises serious concerns” for committee chairs who maintain secure facilities in the Capitol, Thompson wrote in a letter to the House sergeant at arms asking for action to be taken against members of Congress involved in the breach.

Sen. Lindsey Graham, R-S.C., criticized his Republican colleagues for the tactic, calling them “nuts” to make a “run on the SCIF.”

“That’s not the way to do it,” he said. Graham later tweeted that he initially believed Republicans had taken the room by force and that it was actually a “peaceful protest,” adding his House GOP colleagues had “good reason to be upset.”

The Republicans who took part in the protest were unbowed. Rep. Steve Scalise, the No. 2 House Republican, said Democrats are running a “Soviet-style process” that should “not be allowed in the United States of America.”

“We’re not going to be bullied,” he said.

The standoff came the day after William Taylor testified that he was told Trump withheld military aid to Ukraine until the country’s president went public with a promise to investigate Democrats. Trump wanted to put Ukraine’s leader “in a public box,” Taylor recalled.

Democratic Rep. Ted Lieu of California said Republicans did not want to hear from Cooper because they were “freaked out” by that testimony.

“They know more facts are going to be delivered that are absolutely damning to the president of the United States,” Lieu said.