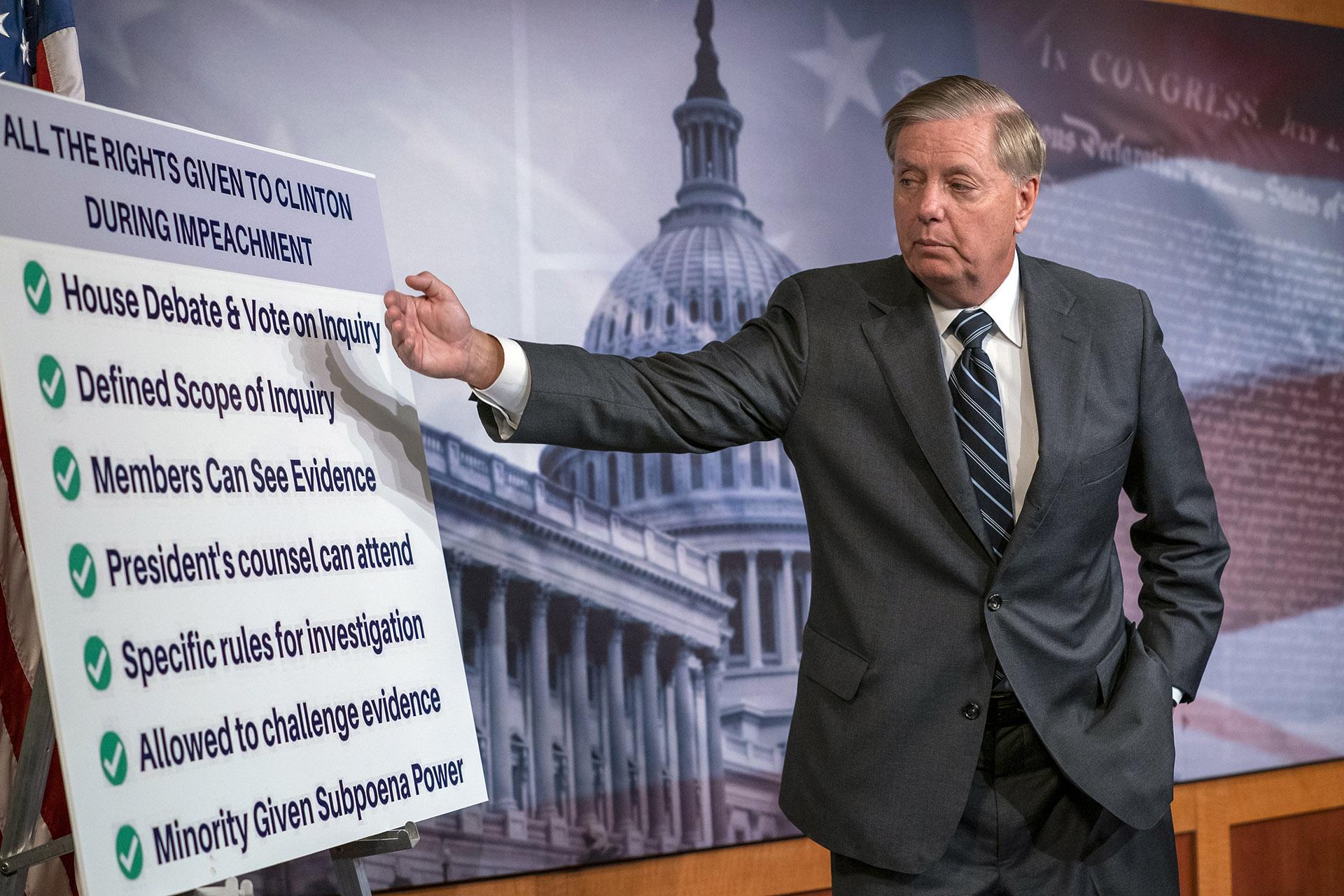 Sen. Lindsey Graham, R-S.C., speaks about a resolution he says he will introduce condemning the Democratic-controlled House for pursuing a “closed door, illegitimate impeachment inquiry,” during a news conference at the Capitol in Washington, Thursday, Oct. 24, 2019. (AP Photo / J. Scott Applewhite)

As the probe hits the one-month mark, Trump and his aides have largely ignored the details of the Ukraine allegations against him. Instead, they’re loudly objecting to the House Democrats’ investigation process, using that as justification for ordering administration officials not to cooperate and complaining about what they deem prejudicial, even unconstitutional, secrecy.

But as a near-daily drip of derogatory evidence emerges from closed-door testimony on Capitol Hill, the White House assertion that the proceedings are unfair is proving to be a less-than-compelling counter to the mounting threat to Trump’s presidency. Some senior officials have complied with congressional subpoenas to assist House Democratic investigators, defying White House orders.

Asked about criticism that the White House lacks a coordinated pushback effort and could do a better job delivering its message, spokeswoman Stephanie Grisham said, “It’s hard to message anything that’s going on behind closed doors and in secret.”

It was a rare public admission from the White House that despite the Republican president’s bravado, real risks remain.

White House officials, who have been treating unified Republican support for Trump as a given, have grown increasingly fearful of GOP defections in a House impeachment vote and a potential Senate trial. While they do not believe there will be enough votes to remove the president, as Democrats hope, the West Wing believes more must be done to shore up Republican support to avoid embarrassment and genuine political peril.

Trump has been upset with his own top aides — including Grisham and acting chief of staff Mick Mulvaney — for not sufficiently changing the story line. Instead he relies on his Twitter account and Q&A sessions with reporters to launch daily attacks on the probe. And while Trump’s personal lawyer Rudy Giuliani has added to the smoke screen, much as he did during the Russia probe, the former New York City mayor has dramatically scaled back his media appearances since several of his associates were arrested in connection with Ukraine.

Complaining privately and publicly that Democrats “stick together” better than the GOP, Trump has leaned on Republican congressional allies to do more, according to White House officials and Republicans close to the West Wing. They spoke on the condition of anonymity because they were not authorized to publicly discuss private conversations.

At first, Trump was angry that his surrogates failed to defend him effectively. Those included House Minority Leader Kevin McCarthy, who stumbled through a “60 Minutes” interview. Trump urged the GOP earlier this week to fight back, a lesson that was taken to heart by a group of conservative Republicans, including members of the Freedom Caucus, who stormed a Capitol Hill hearing room on Wednesday to disrupt testimony in the probe.

Trump allies cheered that maneuver, believing it showed that Republicans throughout Washington were coming to grips with the severity of the situation.

But the GOP complaints still are largely about process and may have limited potency: Trump’s defenders are complaining that the interviews are being conducted in secret, which may soon change, and that Republicans are not involved, though GOP members can ask questions right alongside the Democrats.

The contradictions are telling.

On Thursday, GOP Sen. Lindsey Graham of South Carolina, a top ally of Trump, introduced a resolution condemning the Democratic-controlled House for pursuing a “closed door, illegitimate impeachment inquiry.” Senate Majority Leader Mitch McConnell is a co-sponsor of that measure.

But Graham also said he’s talked to Mulvaney about what seems to be a lackluster White House pushback.

During President Bill Clinton’s impeachment, Graham said, “he had a team that was organized, had legal minds that could understand what was being said versus the legal proceedings in question. And they were on message every day.” Republicans have been complaining for weeks that the Trump White House has no such defense system in place — partly a result of the inability to identify qualified talent but also Trump’s own qualms about projecting concern in the face of the investigation.

“I think they’re working on getting a messaging team together,” Graham said.

Democrats reject Trump arguments that the House interview process is unfair, and White House officials privately acknowledge their legal objections may not win the day. But they believe it’s a political argument that will hold sway with the American people.

However, the White House strategy comes with an expiration date: In coming weeks, the closed-door testimony will give way to public hearings. Democrats are expected to call a narrow group of witnesses to testify that Trump encouraged Ukraine to conduct investigations that could benefit him politically in 2020 and to address whether those requests were tied to conditions for giving Ukraine military aid and a White House meeting.

Some Trump allies believe the White House can’t afford not to directly address what’s already been revealed. They note that as more Trump appointees offer disparaging information to Congress, and as it is corroborated by official sources, the president will have increasing difficulty simply complaining he is the target of a new “witch hunt.”

The president continues to insist he has done nothing wrong, a contention that can be difficult to square with the testimony coming on a nearly daily basis from the other end of Pennsylvania Avenue.

Tuesday’s testimony by the top U.S. envoy to Ukraine, William Taylor, only raised the stakes as he gave House impeachment investigators a detailed roadmap of Trump’s efforts to squeeze that country’s leaders for damaging information about his Democratic political rivals. Taylor, who read a lengthy opening statement, is expected to be a star witness at the Democrats’ planned public hearings.

Though the White House derided Taylor’s testimony as third-hand information, he vividly described, with the help of contemporaneous notes, his concerns about a parallel foreign policy apparatus run by Giuliani that involved American military aid being withheld unless Ukraine’s newly elected president announced an investigation into the Democrat Joe Biden and his son.

Wary of any erosion of GOP support, White House aides are stepping up their outreach to Republican lawmakers, through meetings, conference calls and informal retreats like the one hosted by Mulvaney last weekend at Camp David.

While the White House operation plays catch-up, Trump’s outside allies have also been bolstering their own anti-impeachment messaging.

And things are getting better in the White House and on Capitol Hill, said Trump 2016 campaign adviser Jason Miller, who is a co-host of the Bannon effort. “The uptick in energy and focus that we’ve seen from all parties this week, I think has been a welcome sign for Trump allies.”