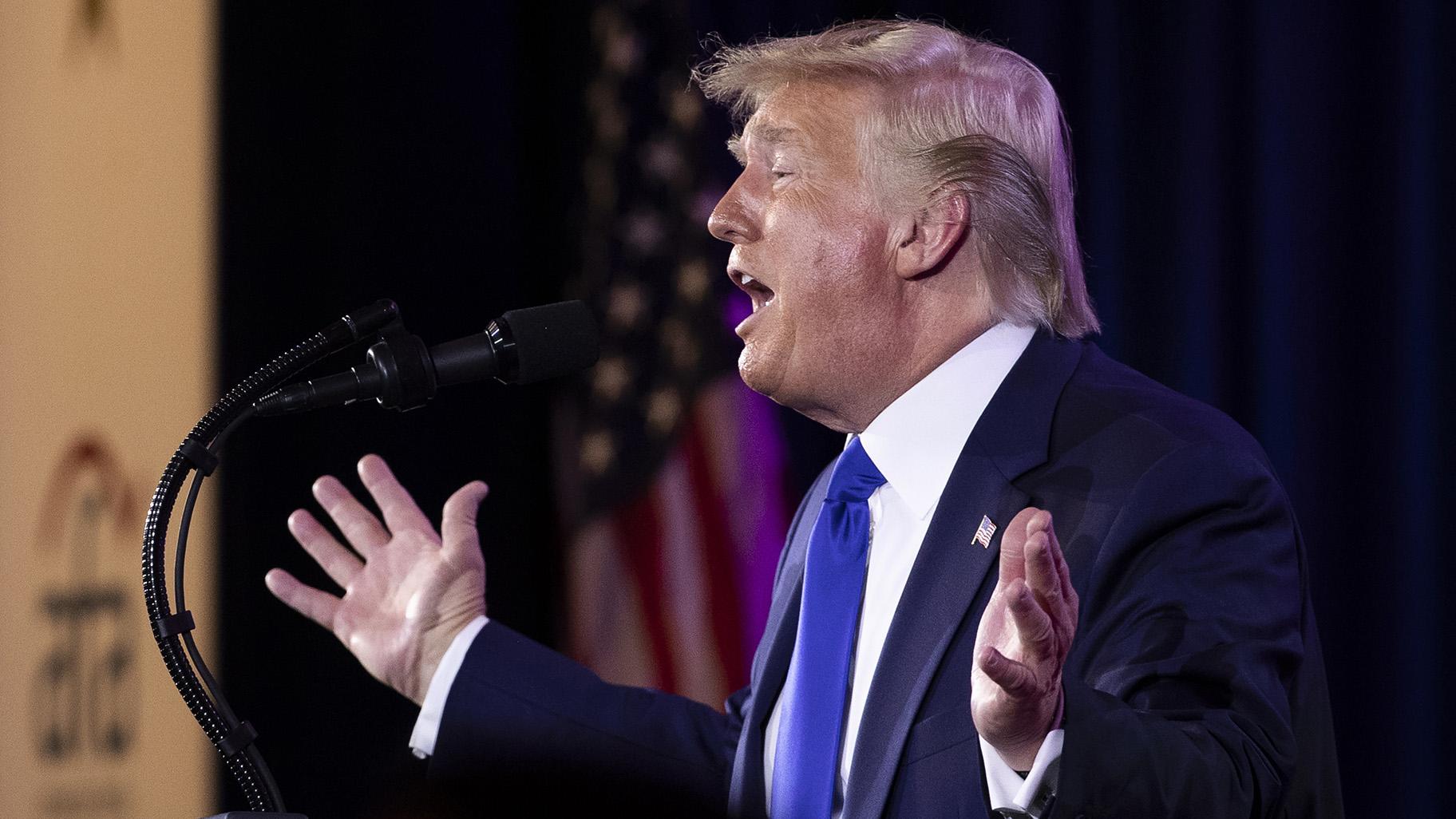 WASHINGTON (AP) — President Donald Trump "strongly condemns" a graphic and violent parody video that depicts a likeness of him shooting and stabbing opponents and members of the news media, the White House said Monday. But his press secretary said he hadn't yet watched the two-minute clip.

The video, which drew widespread condemnation, was played during a conference held by conservative supporters of the president at his Miami golf resort last week.

It depicts a gruesome scene inside a "Church of Fake News" in which a figure whose face has been replaced with an image of Trump goes on a shooting rampage, targeting a long list of political rivals, including Democratic presidential candidate Bernie Sanders, former President Barack Obama and numerous news organizations.

The video, the existence of which The New York Times was first to report, was notable for its level of violence. It is part of a growing genre of pro-Trump memes that routinely earn thousands of views on sites like YouTube and Twitter. Many use superimposed faces and feature the president and his chief supporters valiantly conquering challengers or members of the media.

The one featured at the Florida conference appears to have been first posted in July 2018 on the YouTube channel "TheGeekzTeam," where it has been viewed more than 250,000 times. It uses a violent clip from the 2015 spy thriller "Kingsman: The Secret Service." In the original scene, actor Colin Firth is depicted shooting a crowd of possessed churchgoers.

TheGeekzTeam's parody of Trump in "Kingsman" was taken down for a copyright claim late Monday. An email listed for TheGeekzTeam did not respond to a request for comment.

The channel frequently posts violent parody videos of Trump playing popular movie superheroes or assassins. One depicts Trump as a comic book vigilante from the Netflix show "Daredevil" who stabs, punches and kills the superimposed faces of Democratic Rep. Alexandria Ocasio-Cortez and presidential candidate Elizabeth Warren, as well as CNN reporter Jim Acosta, among others.

Memes, which often feature photographs of politicians with snappy text or edited video clips, have become a highly shareable form of political communication on social media sites. While many are innocent, highlighting facts or opinion, both liberal and conservative sites have used such images to push false claims and outlandish suggestions for years.

And Trump has regularly elevated that content, sharing memes that support him or attack his opponents. The president used his Twitter pulpit in July 2017 to promote a doctored clip of a World Wrestling Entertainment bit to portray Trump tackling and repeatedly pummeling a man whose face had been obscured by the CNN logo.

Trump had yet to weigh in on the video personally by early evening, despite firing off more than a dozen tweets Monday, including one that called on his millions of supporters to vote for former White House press secretary Sean Spicer, who is a contestant on the show "Dancing with the Stars."

The current White House press secretary, Stephanie Grisham, said in her own tweet that Trump would be viewing the video later and that, "based upon everything he has heard, he strongly condemns" it.

The genre has become so popular online that the American Priority conference featured a contest for meme-makers to submit their best pro-Trump images and videos to be showcased alongside talks by some of the president's high-profile backers, including his eldest son, Donald Trump Jr., and another former press secretary, Sarah Sanders.

That contest was promoted online by a Twitter user who goes by the handle @CarpeDonktum and, as one of Trump's favored meme-makers, was among several conservative social media provocateurs invited to meet the president at the White House earlier this year.

The video of Trump slaying his political opponents was part of a loop of videos that was played in a "meme exhibit" at the Miami event, Carpe Donktum said in a statement, adding that the "Kingsman" video was "CLEARLY satirical." Carpe Donktum has declined to identify himself to the AP in the past, due to concerns for his safety. He did not respond to requests for comment Monday.

The event's organizer, Alex Phillips, distanced himself from what he called the "unauthorized video" in a statement, saying that it was shown last week "in a side room."

"This video was not approved, seen, or sanctioned" by the event's organizers, Phillips said, adding through a spokeswoman, "AMPFest condemns all violence in the strongest terms and only wants to unite Americans."

Many political meme creators insist their work is meant to be viewed as political humor — even when the images they create use hateful language, violent imagery or misinformed talking points to get their message across.

But social media comments often promote or cheer on the false or incendiary rhetoric in the memes, said Lanier Holt, an Ohio State University professor who researches political communication.

"When the person who actually created it gets busted or identified, they say, 'Oh, it's a joke,'" Holt said.

The video controversy comes as the president has increased his criticism of the news media as Democrats press ahead on their impeachment inquiry.

The fake Trump is depicted killing a series of political figures in his gruesome rampage, many of whom Trump has criticized in real life. He stabs the late Sen. John McCain, hits and stabs TV personality Rosie O'Donnell in the face and lights Sen. Bernie Sanders' head on fire. Other targets include the Black Lives Matter group, Democratic Rep. Maxine Waters, Bill and Hillary Clinton, and Rep. Adam Schiff, who, as Democratic chairman of the House Intelligence Committee, is a leader in the impeachment inquiry.

The video also features the fake Trump unleashing his fury on news outlets, including CNN, The Washington Post, BBC, PBS, NBC and Politico. The president has derided some of those same organizations as "fake news." Trump also has labeled journalists as the "enemy of the American people."

The video was condemned by the White House Correspondents Association, which represents journalists covering the president and said it was "horrified" by the content.

"All Americans should condemn this depiction of violence directed toward journalists and the President's political opponents," said Jonathan Karl, WHCA president. "We have previously told the President his rhetoric could incite violence.  Now we call on him and everybody associated with this conference to denounce this video and affirm that violence has no place in our society."

The White House News Photographers Association also released a statement, saying it "vehemently condemns this and all other depictions of violence against journalists" and asking that "the president and all others do the same."

The video features the logo for Trump's 2020 campaign, but campaign spokesman Tim Murtaugh said it "was not produced by the campaign, and we do not condone violence."

American Priority has branded itself as a group aimed at promoting Trump's agenda, "as well as an open and vigorous dialogue about free speech, free association and American culture," according to a press release for the event.

Supports of the president had responded with outrage in 2017 when comedian Kathy Griffin posed for a photograph holding up what was meant to look like the president's bloody, severed head.