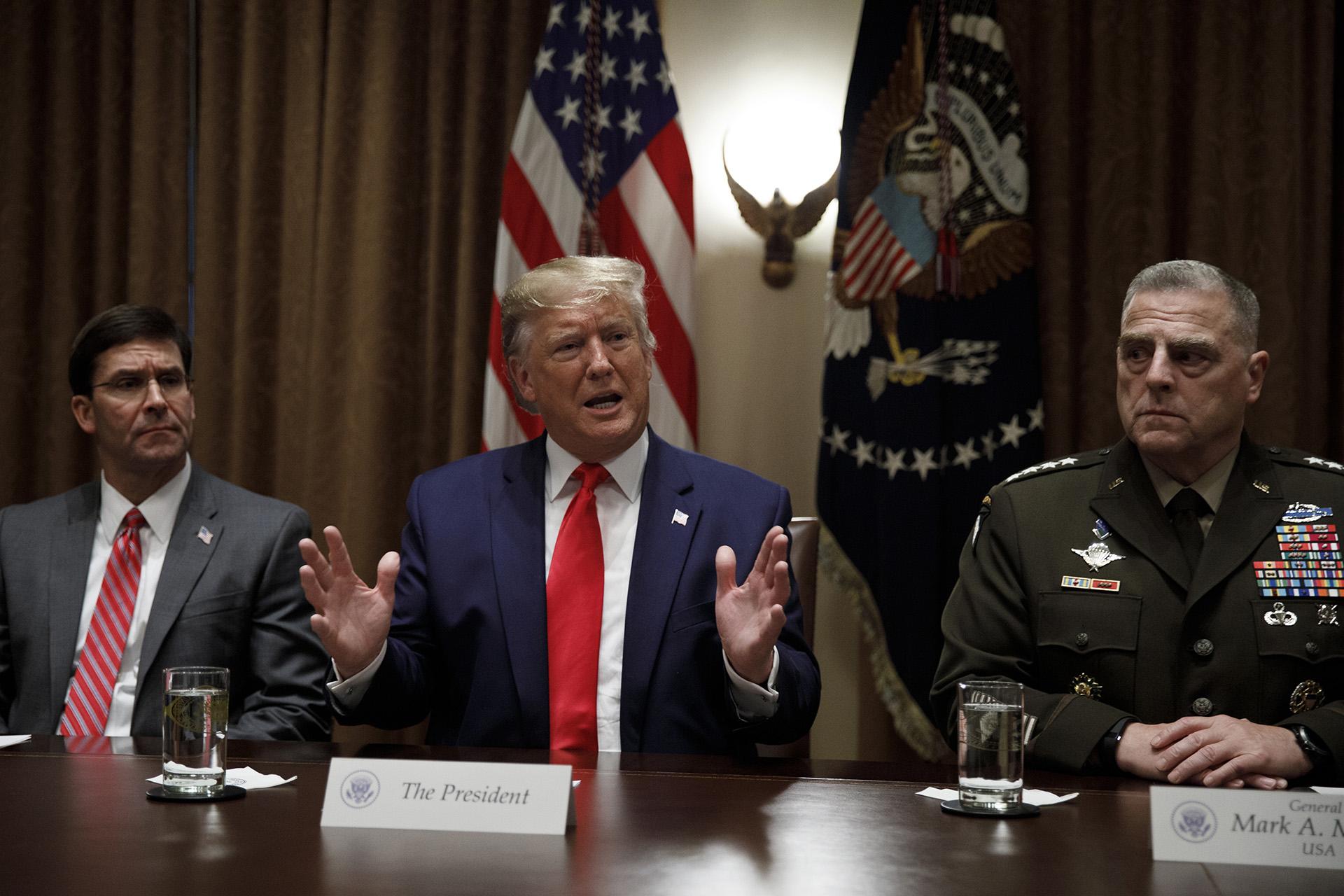 President Donald Trump, joined by from left, Defense Secretary Mark Esper, and Chairman of the Joint Chiefs of Staff Gen. Mark Milley, speaks to media during a briefing with senior military leaders in the Cabinet Room at the White House in Washington, Monday, Oct. 7, 2019. (AP Photo / Carolyn Kaster)

WASHINGTON (AP) — The White House declared Tuesday it will halt any and all cooperation with what it termed the “illegitimate” impeachment probe by House Democrats, sharpening the constitutional clash between President Donald Trump and Congress.

Trump attorneys sent a lengthy letter to House leaders bluntly stating White House refusal to participate in the inquiry that was given a boost by last week’s release of a whistleblower’s complaint that the president sought political favors from Ukraine.

“Given that your inquiry lacks any legitimate constitutional foundation, any pretense of fairness, or even the most elementary due process protections, the Executive Branch cannot be expected to participate in it,” White House Counsel Pat Cipollone wrote.

That means no additional witnesses under administration purview will be permitted to appear in front of Congress or comply with document requests, a senior official said.

The White House is objecting that the House has not voted to begin an impeachment investigation into Trump. It also claims that Trump’s due process rights are being violated.

House intelligence committee Chairman Adam Schiff tweeted in response that Trump’s refusal to cooperate with the inquiry signals an attitude that “the president is above the law.”

“The Constitution says otherwise,” he asserted.

House Speaker Nancy Pelosi has insisted the House is well within its rules to conduct oversight of the executive branch under the Constitution regardless of a formal impeachment inquiry vote.

“Mr. President, you are not above the law,” Pelosi said in a statement Tuesday night. “You will be held accountable.”

The Constitution states the House has the sole power of impeachment, and that the Senate has the sole power to conduct impeachment trials. It specifies that a president can be removed from office for “treason, bribery, or other high crimes and misdemeanors,” if supported by a two-thirds Senate vote. But it offers little guidance beyond that on proceedings.

The White House letter marks the beginning of a new all-out strategy to counter the impeachment threat to Trump. Aides have been honing their approach after two weeks of what allies have described as a listless and unfocused response to the probe.

The president himself is sticking with the same Trump-as-victim rhetoric he has used for more than a year.

“People understand that it’s a fraud. It’s a scam. It’s a witch hunt,” he said on Monday. “I think it makes it harder to do my job.  But I do my job, and I do it better than anybody has done it for the first two and half years.”

Early Tuesday, Trump escalated his fight with Congress by blocking Gordon Sondland, the U.S. European Union ambassador, from testifying behind closed doors about the president’s dealings with Ukraine.

Sondland’s attorney, Robert Luskin, said his client was “profoundly disappointed” that he wouldn’t be able to testify. And Schiff said Sondland’s no-show was “yet additional strong evidence” of obstruction of Congress by Trump and Secretary of State Mike Pompeo that will only strengthen a possible impeachment case.

The House followed up Tuesday afternoon with subpoenas for Sondland’s testimony and records.

Trump is also bulking up his legal team.

Former Republican Rep. Trey Gowdy is being brought on as outside counsel, according to an administration official. Gowdy, who did not seek reelection last year, led a congressional investigation of former presidential candidate Hilary Clinton and the terrorist attacks in Benghazi, Libya.

The whistleblower’s complaint and text messages released by another envoy portray U.S. Ambassador Sondland as a potentially important witness in allegations that the Republican president sought to dig up dirt on Democratic rival Joe Biden in Ukraine and other countries in the name of foreign policy.

Pelosi said thwarting the witness testimony on Tuesday was an “abuse of power” in itself by the president.

The White House letter to Pelosi, Schiff and other House committee chairmen, though asserting a legal argument that Trump and other officials cannot cooperate, would not be likely to win respect in court, said Stephen Vladeck, a law professor at the University of Texas.

“This letter reads to me much more like a press release prepared by the press secretary than an analysis by the White House counsel,” he said.

The White House is claiming that Trump’s constitutional rights to cross-examine witnesses and review all evidence in impeachment proceedings extend even to House investigations, not just a potential Senate trial. It also is calling on Democrats to grant Republicans in the House subpoena power to seek evidence in the president’s defense.

Elsewhere in Washington, a federal judge heard arguments Tuesday in a separate case on whether the House has actually undertaken a formal impeachment inquiry despite not having taken a vote and whether the inquiry can be characterized, under the law, as a “judicial proceeding.”

That distinction matters because while grand jury testimony is ordinarily secret, one exception authorizes a judge to disclose it in connection with a judicial proceeding. House Democrats are seeking grand jury testimony from special counsel Robert Mueller’s Russia investigation as they conduct their impeachment inquiry.

“The House under the Constitution sets its own rules, and the House has sole power over impeachment,” Douglas Letter, a lawyer for the House Judiciary Committee, told the court.