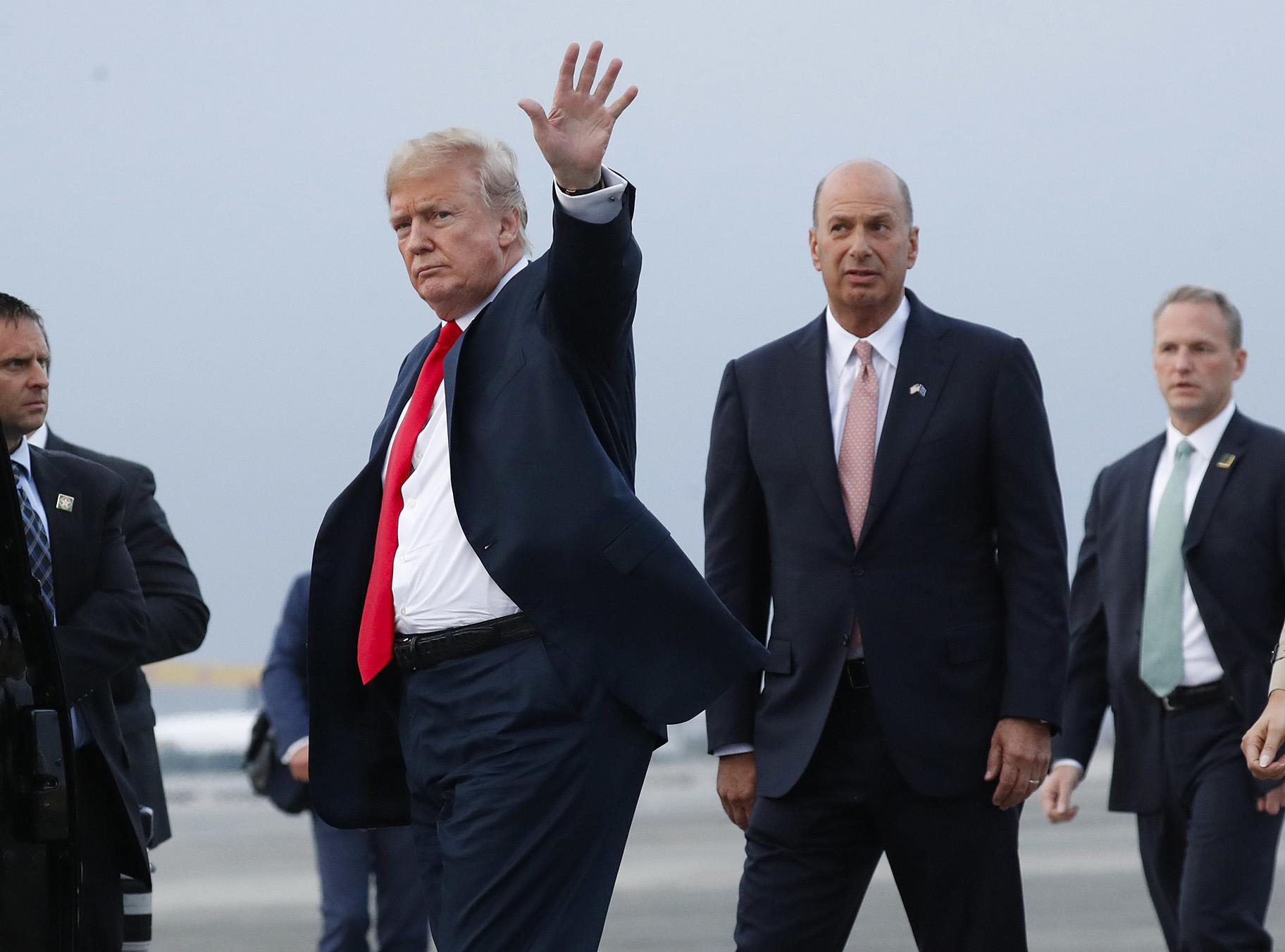 In this Tuesday, July 10, 2018, file photo, President Donald Trump is joined by Gordon Sondland, the U.S. ambassador to the European Union, second from right, as he arrives at Melsbroek Air Base, in Brussels, Belgium. (AP Photo / Pablo Martinez Monsivais, File)

Democrats are moving quickly to interview key witnesses and lock down information as they explore the question of whether the Republican president compromised national security or abused his office by seeking dirt on a political rival from a foreign country. The probe was sparked by a whistleblower who revealed that Trump asked Ukrainian President Volodymyr Zelenskiy to investigate former Vice President Joe Biden and his son Hunter — potentially in exchange for military aid money. Trump, who has defended his conduct as “perfect,” last week publicly called on China to investigate the Bidens, too. Calls to investigate the Bidens have come without evidence of wrongdoing by either Biden in either country.

Trump’s lawyer, former New York Mayor Rudy Giuliani, says the calls for investigations are perfectly kosher, telling Fox News that the “president of the United States has every right to ask countries to help us in a criminal investigation that should be undertaken.”

Meanwhile, the administration is continuing to offer mixed signals as it struggles to respond to the barrage and as the president lashes out by tweet.

Staff and lawmakers from the House Intelligence Committee, the House Oversight and Reform Committee and the House Foreign Affairs Committee will continue to hear from witnesses throughout the week. Gordon Sondland, the U.S. ambassador to the European Union who has become a key figure in the probe, will be deposed on Tuesday. And Marie Yovanovitch, the former U.S. ambassador to Ukraine who was recalled from the post early, will be speaking Friday.

It is uncertain whether two additional figures — George Kent, the deputy assistant secretary of state in the European and Eurasian Bureau, and Ulrich Brechbuhl, a State Department counselor — will be making requested appearances, after Secretary of State Mike Pompeo objected to the timing.

Attorney Mark Zaid said the second person has information that corroborates the original whistleblower’s complaint about Trump’s dealings with Ukraine and has “firsthand knowledge” of key events. That threatens to undermine arguments made by Trump and his allies that the original complaint was politically-motivated and unreliable because it was based on secondhand or third-hand information.

But that hasn’t stopped Trump and his allies from continuing to try to undermine the source of the probe, while criticizing the way House Democrats are handling the inquiry.

Sen. Lindsey Graham, R-S.C., one of Trump’s most vocal backers, argued that there was nothing wrong with Trump’s July conversation with Zelenskiy. In an interview on Fox News Channel’s “Sunday Morning Futures,” he said the accusation look like a “political setup.”

The House committees have requested a slew of documents from the White House as well as top officials including Pompeo, Giuliani and Vice President Mike Pence. Pompeo blew a Friday deadline for complying with a subpoena, but said over the weekend that the State Department had sent a letter to Congress Friday night as its initial response to the request. He also indicated a new willingness to comply, saying: “We’ll obviously do all the things that we’re required to do by law.”

Giuliani and Pence have been given until Oct. 15 to turn over their documents, while the White House subpoena deadline is Oct. 18.

Democrats are moving swiftly and have said they hope to finish the investigation in a matter of weeks — perhaps even before Thanksgiving.

Trump has offered a series of contradictory statements when it comes to whether or not his administration plans to comply with the House subpoena.

Asked about the prospect Wednesday, Trump offered an inaccurate, though conciliatory response, telling reporters, “I always cooperate.” A day later, however, Trump had a different answer for the same question, saying he would instead leave the matter to his lawyers.

By Friday he had changed his tune again, confirming reports the White House was preparing a letter to House Speaker Nancy Pelosi, D-Calif., arguing that Congress cannot undertake an impeachment investigation without having a formal vote to authorize it. Pelosi has resisted taking that step, insisting the House is well within its rules to conduct oversight of the executive branch under the Constitution.

It remains unclear when or even if the White House letter will be sent — but Democrats do not appear to be budging, even as they insist they have the needed votes.

“If Speaker Pelosi did in fact move forward with a floor vote on actually proceeding with an investigation ...  there’s no question in my mind that she would have the votes,” Rep. Jim Himes of Connecticut, the top Democrat on the House Intelligence Committee, said on CBS’s “Face the Nation.”

WILL MORE REPUBLICANS SPEAK OUT?

Sen. Susan Collins, R-Maine, became just the third Republican senator to publicly question Trump’s conduct when she said over the weekend that “it’s not OK” for a president to encourage a foreign state to investigate a political rival.

The others are Sens. Ben Sasse of Nebraska and Mitt Romney of Utah. Romney’s sharp criticism has sparked a furious response from Trump, who took the extraordinary step Saturday of calling for Romney’s impeachment after labeling him “pompous” and “a fool.” The Constitution doesn’t call for impeachment of a senator and Utah’s laws don’t have a provision for recalling one.

It appears unlikely many more Republicans will choose to choose to take a stand against the president, who remains deeply popular with Republican voters. That’s something one of the Republicans challenging Trump for the GOP presidential nomination, Joe Walsh of Illinois, called on fellow Republicans to do.

“This president needs to be impeached, just based on what he himself has said,” Walsh said on CNN. “And Republicans better get behind that.”

If the House does vote to approve charges against Trump, it would then be up to the Republican-led Senate to decide whether to dismiss the charges or hold a trial. Some Senate Republicans have expressed concerns about Trump’s interactions with Ukraine, but there are few signs there would be enough discontent to convict.

If Trump were impeached, it would take a two-thirds vote in the Senate to convict him and remove him from office. That has never happened. Only two presidents have been impeached: Andrew Johnson in 1868 and Bill Clinton in 1998; both won acquittal in the Senate.