Schiff, D-Calif., is set to be in the Chicago area by Thursday evening, when he’s scheduled to give a lecture on “The Threat to Liberal Democracy at Home and Abroad” at Northwestern University in Evanston.

While WTTW News and other media organizations are planning to cover the event, only members of the public and the school’s student journalists will be given the chance to ask Schiff questions.

Though several U.S. House committees will be involved in the impeachment inquiry, House Speaker Nancy Pelosi, D-Calif., has signaled that Schiff’s intelligence committee will take the lead.

The investigation centers in part on whether Trump withheld American aid from Ukraine as he sought the country’s help to undermine a political rival, as alleged in a now-public whistleblower complaint filed by an unnamed individual believed to be a CIA agent.

In a rough memo transcribing a July phone conversation with Ukraine President Volodymyr Zelenskiy, Trump is heard pressuring Zelenskiy to investigate former Vice President Joe Biden and his son, Hunter, who served on the board of a Ukranian energy company.

Joe Biden is a leading contender for the Democratic nomination for president, and may well face off against Trump next year for the White House.

Schiff has in recent days become a Trump target.

Trump accused the “shifty, dishonesty” congressman of “treason” for his summary of Trump’s call with Zelenskiy, and also said it is a “scam” that, as disclosed Wednesday by the New York Times, the whistleblower who brought about the impeachment investigation had asked Schiff’s intelligence committee for advice prior to filing it.

“The President cannot use the power of his office to pressure foreign leaders to investigate his political opponents. His rant this morning reinforces the urgency of our work. America is a Republic, if we can keep it,” Schiff tweeted Thursday in response to Trump publicly calling on Ukraine and China to investigate the Bidens.

“Because what happened in China is just about as bad as what happened with Ukraine,” Trump said. “I would recommend that they start an investigation into the Bidens because nobody has any doubt that they weren’t crooked.” 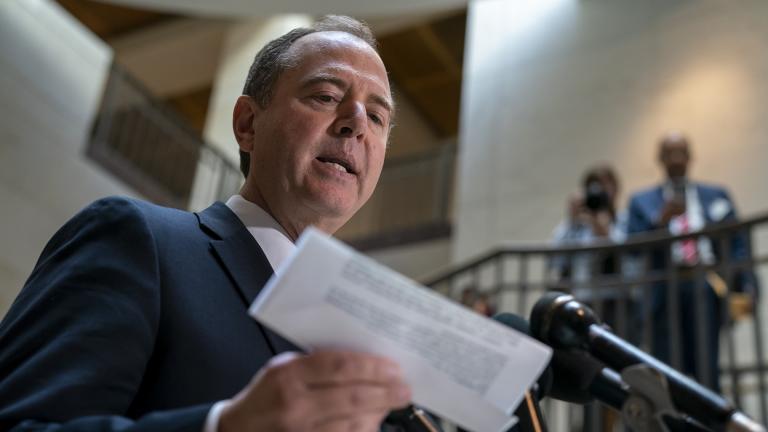