WASHINGTON (AP) — At one end of Pennsylvania Avenue, the president raged about treason. At the other, the methodical march toward impeachment proceeded apace.

Democrats on Monday subpoenaed Rudy Giuliani, the president’s personal lawyer who was at the heart of Trump’s efforts to get Ukraine to investigate political rival Joe Biden’s family. That was after one of Trump’s staunchest defenders, Senate Majority Leader Mitch McConnell, said he would have “no choice” but to consider articles of impeachment if the House approved them.

With Congress out of session for observance of the Jewish holidays, Democrats moved aggressively against Giuliani, requesting by Oct. 15 “text messages, phone records and other communications” that they referred to as possible evidence. They also requested documents and depositions from three of his business associates.

Meanwhile, the circle of officials with knowledge of Trump’s phone call to Ukraine’s president widened with the revelation that Secretary of State Mike Pompeo listened in on the July 25 conversation.

Pompeo’s presence on the Ukraine call, confirmed by two officials who spoke on condition of anonymity to discuss an internal matter, provided the first confirmation that a Cabinet official heard Trump press President Volodymyr Zelenskiy to investigate Hunter Biden’s membership on the board of a Ukrainian gas company. It is that call, and the circumstances surrounding it, that are fueling the new Democratic drive for impeachment.

McConnell, a steadfast Trump defender, nonetheless swatted down talk that that the GOP-controlled Senate could dodge the matter of impeachment if the House approved charges against Trump.

“It’s a Senate rule related to impeachment, it would take 67 votes to change, so I would have no choice but to take it up,” McConnell said on CNBC. “How long you’re on it is a whole different matter.” 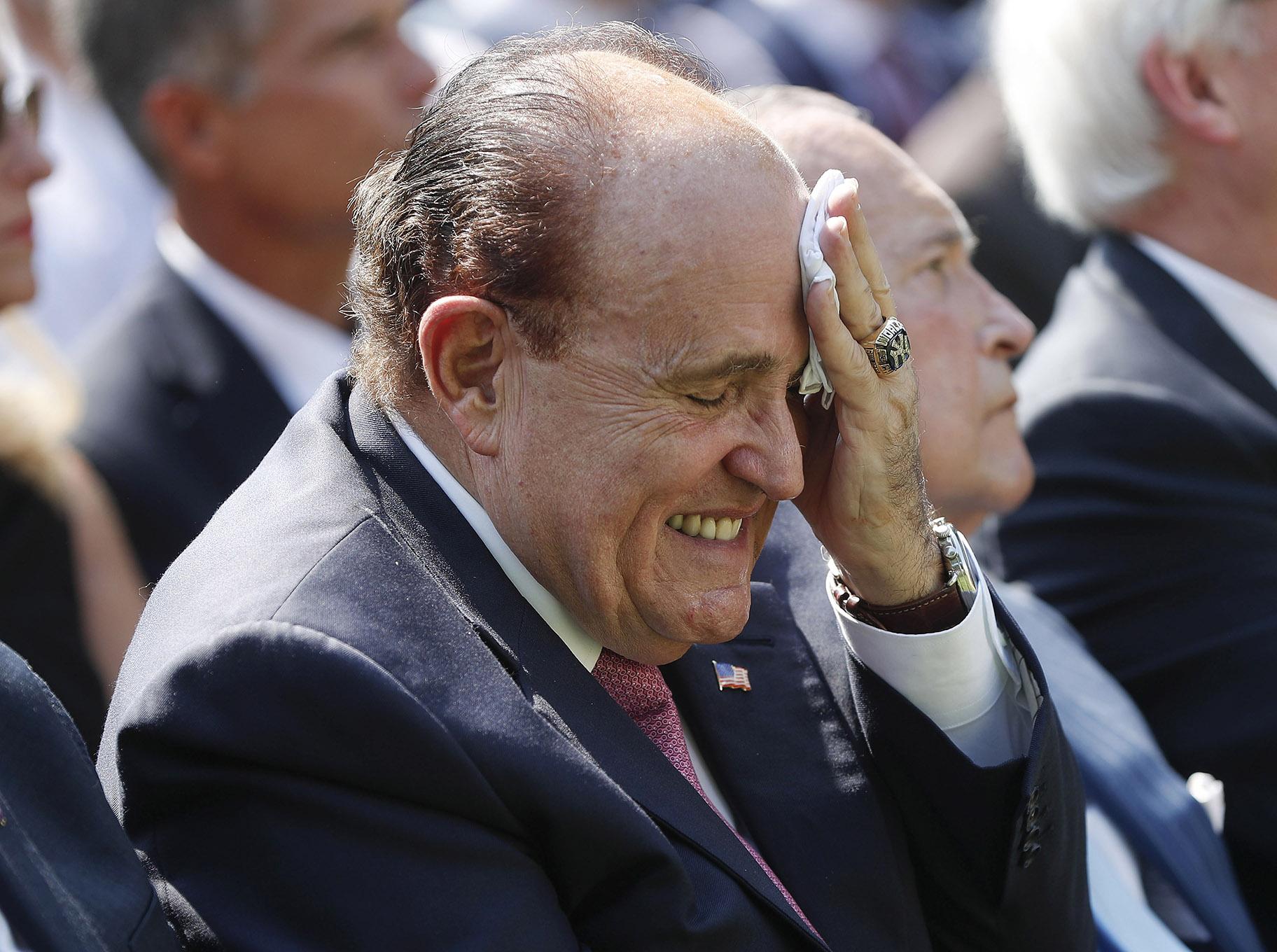 In this July 29, 2019 file photo, Rudy Giuliani, an attorney for President Donald Trump, wipes his forehead as he listens to Trump speak in the Rose Garden of the White House in Washington. (AP Photo / Pablo Martinez Monsivais)

Trump took to Twitter to defend anew his phone call with Zelenskiy as “perfect” and to unleash a series of attacks, most strikingly against House intelligence committee Chairman Adam Schiff. The Democrat, he suggested, ought to be tried for a capital offense for launching into a paraphrase of Trump during a congressional hearing last week.

“Rep. Adam Schiff illegally made up a FAKE & terrible statement, pretended it to be mine as the most important part of my call to the Ukrainian President, and read it aloud to Congress and the American people,” the president wrote. “It bore NO relationship to what I said on the call. Arrest for Treason?”

Trump tweeted repeatedly through the day but was, for the most part, a lonely voice as the White House lacked an organization or process to defend him. Senior staffers, including acting chief of staff Mick Mulvaney and White House counsel Pat Cipollone, were to present Trump this week with options on setting up the West Wing’s response to impeachment, officials said.

A formal war room was unlikely, though some sort of rapid response team was planned to supplement the efforts of Trump and Giuliani. But Trump was angry over the weekend at both Mulvaney and press secretary Stephanie Grisham for not being able to change the narrative dominating the story, according to two Republicans close to the White House not authorized to speak publicly about private conversations.

Democrats have orders from House Speaker Nancy Pelosi to keep momentum going despite a two-week recess that started Friday. Staff for three committees are scheduled on Wednesday and Thursday to depose Marie “Masha” Yovanovitch, the U.S. ambassador to Ukraine who was removed by the Trump administration earlier this year, and Kurt Volker, who resigned last week as America’s Ukrainian envoy. Members of intelligence committee on Friday will interview Michael Atkinson, the inspector general for the intelligence community who first received the whistleblower’s complaint.

Democrats are driving the proceedings toward what some hope is a vote to impeach, or indict, Trump by year’s end. They have launched a coordinated messaging and polling strategy aimed at keeping any political backlash in closely divided districts from toppling their House majority.

Meanwhile, an outside group that supports GOP House candidates was starting anti-impeachment digital ads on Monday against three House Democrats from districts Trump won in 2016.  The ads by the Congressional Leadership Fund accuse Reps. Matt Cartwright of Pennsylvania, Elaine Luria of Virginia and Elissa Slotkin of Michigan of “tearing us apart,” and are among the first in which Republicans are trying to use the impeachment issue against Democratic candidates.

However, support across America for impeachment has grown significantly from its level before the House launched its formal inquiry last week.

A new poll from Quinnipiac University shows 47% of registered voters say Trump should be impeached and removed from office, while 47% say he should not. Just a week before, it was 37% for impeachment and 57 percent against. That was before the White House released its rough version of the call between Trump and Ukraine’s president and House Speaker Nancy Pelosi’s announcement of a formal impeachment inquiry.

In the CNN poll, 47% said Trump should be impeached and removed from office, up from 41% in May.

Schiff said on Sunday that his intelligence panel would hear from the still-secret whistleblower “very soon” but that no date had been set and other details remained to be worked out.

A day after Trump demanded to meet the whistleblower, whom he has repeatedly assailed, he said when asked about the person: “Well, we’re trying to find out about a whistleblower,” who made his perfect call “sound terrible.”

The whistleblower’s attorney, Andrew Bakaj, said Monday that the person “is entitled to anonymity. Law and policy support this, and the individual is not to be retaliated against. Doing so is a violation of federal law.”

Separately, the Justice Department disclosed that Trump recently asked Australian Prime Minister Scott Morrison and other foreign leaders to help Attorney General William Barr with an investigation of the origins of the Russia investigation that has shadowed his administration for more than two years.

Trump was requesting help for U.S. Attorney John Durham’s investigation into the origins of special counsel Robert Mueller’s probe into Russian interference in the 2016 election. The investigation outraged Trump, who cast it as a politically motivated “witch hunt.”

“I honestly believe this president has not gotten his pound of flesh yet from past grievances on the 2016 investigation,” Bossert said Sunday on ABC. “If he continues to focus on that white whale, it’s going to bring him down.”