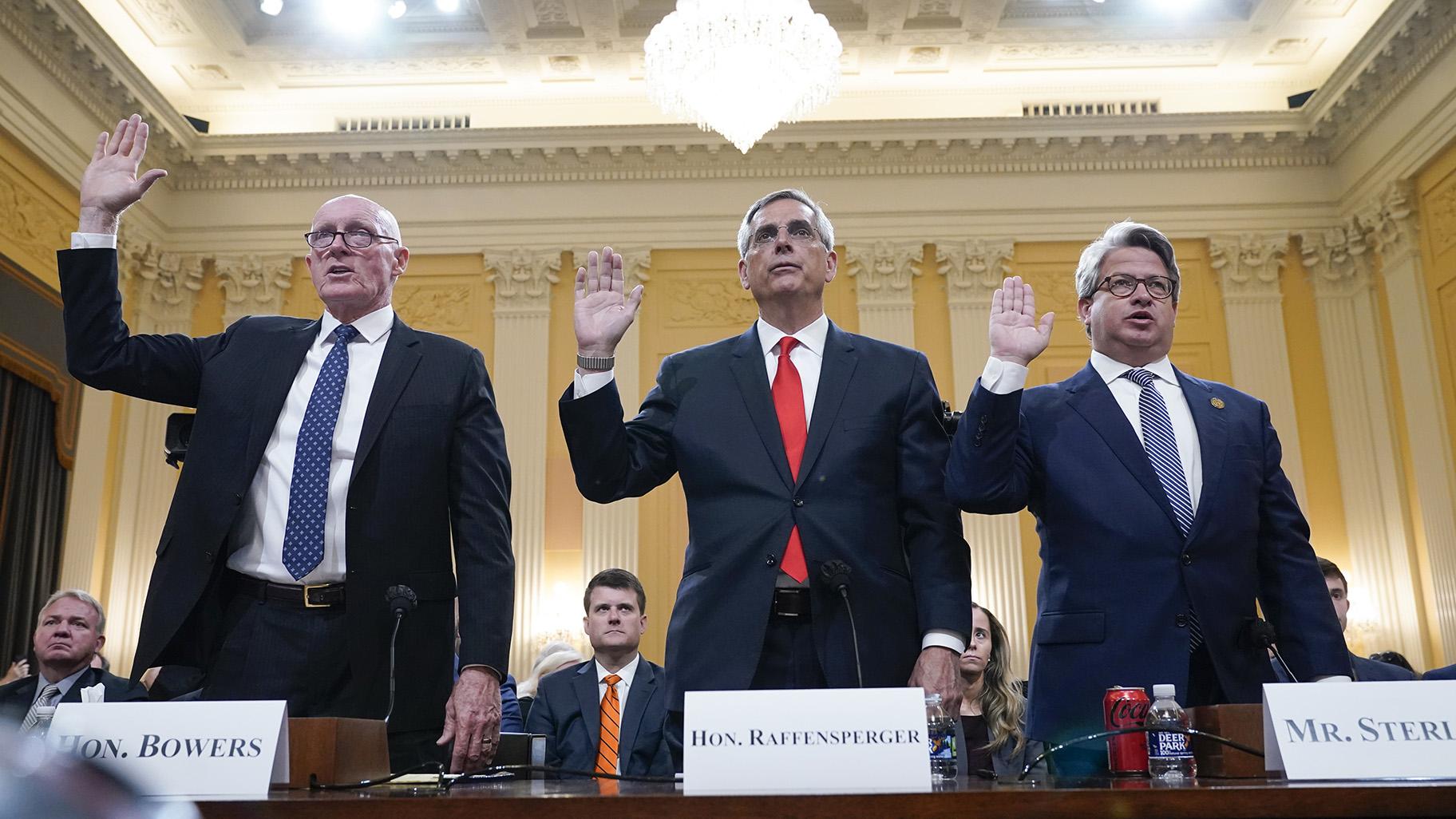 Rusty Bowers, Arizona state House Speaker, from left, Brad Raffensperger, Georgia Secretary of State, and Gabe Sterling, Georgia Deputy Secretary of State, are sworn in to testify as the House select committee investigating the Jan. 6 attack on the U.S. Capitol continues to reveal its findings of a year-long investigation, at the Capitol in Washington, Tuesday, June 21, 2022. (AP Photo / Jacquelyn Martin)

The panel investigating the Jan. 6, 2021, attack at the U.S. Capitol focused on Trump’s efforts to undo Joe Biden’s victory in a most local way — by repeatedly leaning on public officials in key battleground states with shocking proposals to reject ballots outright or to submit alternative electors for the final tally in Congress.

The high-profile pressure, described as potentially illegal, was fueled by the president’s false claims of voter fraud — which, the panel says, spread dangerously in the states and ultimately led directly to the deadly insurrection at the Capitol.

“A handful of election officials in several key states stood between Donald Trump and the upending of American democracy,” Chairman Bennie Thompson said, praising them as heroes and the “backbone of our democracy.”

The hearing was punctuated throughout with accounts of the personal attacks faced by state and local officials.

Arizona Republican House Speaker Rusty Bowers said he was subjected to a public smear campaign, including relentless bullhorn protests at his home and a pistol-wielding man taunting his family and neighbors.

Officials in Michigan, Pennsylvania and other states told similar stories of having their cellphone numbers and home addresses spread publicly after they refused Trump’s demands.

At one gripping moment, two Georgia election workers, a mother and daughter, testified that they lived in fear of saying their names aloud after Trump wrongly accused them of voter fraud.

“There were a lot of threats wishing death upon me,” said Wandrea ArShaye “Shaye” Moss, a former state election worker.

The public hearing, the fourth by the panel this month, stemmed from its yearlong investigation into Trump’s unprecedented attempt to remain in power, a sprawling scheme that the chairman of the Jan. 6 committee has likened to an “attempted coup.” The panel insisted that Trump’s lies over the election threaten democracy to this day, as local officials face ongoing threats and challengers try to take over their jobs.

One key witness was Republican Georgia Secretary of State Brad Raffensperger, who testified about Trump’s phone call asking him to “find 11,780” votes that could flip his state to prevent Biden’s election victory.

While the committee cannot charge Trump with any crimes, the Justice Department is watching the panel’s work closely.

Trump defended himself on social media, describing his phone call to Raffensperger as “perfect,” similar to the way he described the 2020 call with Ukraine President Volodomyr Zelenskyy that resulted in his first impeachment.

The public testimony from Raffensperger came weeks after he appeared before a special grand jury in Georgia investigating whether Trump and others illegally tried to intervene in the state’s 2020 election. Raffensperger beat a Trump-backed challenger in last month’s primary election.

He and Gabe Sterling, his chief operations officer, detailed their painstaking efforts to count the Georgia vote, going down the “rabbit hole,” he said, investigating one false claim after another of fraud. After a hand recount of 5 million ballots, Biden’s victory was unchanged.

“The numbers don’t lie,” said Raffensperger, who said that some 28,000 Georgia voters simply bypassed the presidential race but voted down-ballot for others. “At the end of the day, President Trump came up short.”

Bowers, the Arizona House speaker who also appeared in person, walked through what started with a Trump phone call on a Sunday after he returned from church. The defeated president laid out a proposal to have the state replace its electors for Biden with others favoring Trump.

“I said, ‘Look, you’re asking me to do something that is counter to my oath,’” Bowers testified.

Bowers insisted on seeing Trump’s evidence of voter fraud, which he said Trump’s team never produced beyond vague allegations. He recalled Trump lawyer Rudy Giuliani later told him, “We’ve got lots of theories, we just don’t have the evidence.”

Trump wanted Bowers to hold a hearing at the state Capitol, but the Republican leader said there was already a “circus” atmosphere over the election. The panel showed video footage of protesters at the Arizona statehouse including a key figure, the horned hat-wearing Jacob Chansley, who was later arrested at the Jan. 6, 2021, Capitol riot.

Trump nevertheless pressed the Arizona official, including in a follow-up call, suggesting he expected a better response from a fellow Republican.

But Bowers said that because of his faith, including a belief the U.S. Constitution is divinely inspired, what the president was asking him to do was “foreign to my very being.”

With in-person testimony, Moss, who had worked for Georgia’s Fulton County elections department since 2012, and her mother, Ruby Freeman, a temporary election worker who spoke earlier to the panel, gripped the audience with their accounts of the fallout from the smear campaign by Trump and Giuliani.

The select committee outlined Trump’s elaborate “fake electors” scheme that sought to have representatives in as many as seven battlegrounds — Arizona, Georgia, Michigan, Pennsylvania, Wisconsin, Nevada and New Mexico — state that he, not Biden, had won their states.

Several Republicans in Congress latched onto the scheme in the run-up to Jan. 6.

The committee displayed a text message from an aide to Sen. Ron Johnson, R-Wis., to an aide for Vice President Mike Pence the morning of Jan. 6 saying Johnson wanted to give Pence an “alternate slate of electors for MI and WI.”

“Do not give that to him,” Pence aide Chris Hodgson replied. And Johnson didn’t, a spokeswoman said Tuesday.

Conservative law professor John Eastman, a lawyer for Trump, pushed the fake electors in the weeks after the election. The idea was to set up a challenge to Biden’s win when Congress met on Jan. 6 with Pence presiding in what is typically a ceremonial role to certify the election. Trump sent thousands of his supporters to the Capitol to “fight like hell,” as he pressured Pence to reject the ballots. The effort ultimately collapsed amid the deadly riot, as Pence refused Trump’s demands that he reject the electors.