Video: Joining “Chicago Tonight” with reaction to the latest impeachment news are U.S. Rep. Raja Krishnamoorthi, a Democrat who serves on the House Intellgence Committee, one of the committees leading the inquiry; John Dehn, faculty director of Loyola University Chicago’s national security and civil rights program; and Cecile Shea, a former member of the U.S. foreign service and current senior fellow on security and diplomacy at the Chicago Council on Global Affairs.

WASHINGTON (AP) — Trading hot charges of intimidation, the Trump administration took a defiant step toward resisting Congress’ access to impeachment witnesses Tuesday, and House Democrats warned such efforts themselves could amount to an impeachable offense.

In quick escalation, Secretary of State Mike Pompeo said the Democrats were trying to “intimidate” and “bully” five current and former career officials into testifying and providing documents. House investigators countered that it would be illegal for the secretary to try to protect Trump by preventing them from talking to Congress.

The exchange of accusations and warnings signaled yet another stiffening in the confrontation between the executive and legislative branches following the Democrats’ launching of the impeachment inquiry late last week. That followed a national security whistleblower’s disclosure of Trump’s July phone call seeking help from the new Ukrainian president in investigating Democratic rival Joe Biden and Biden’s son Hunter. 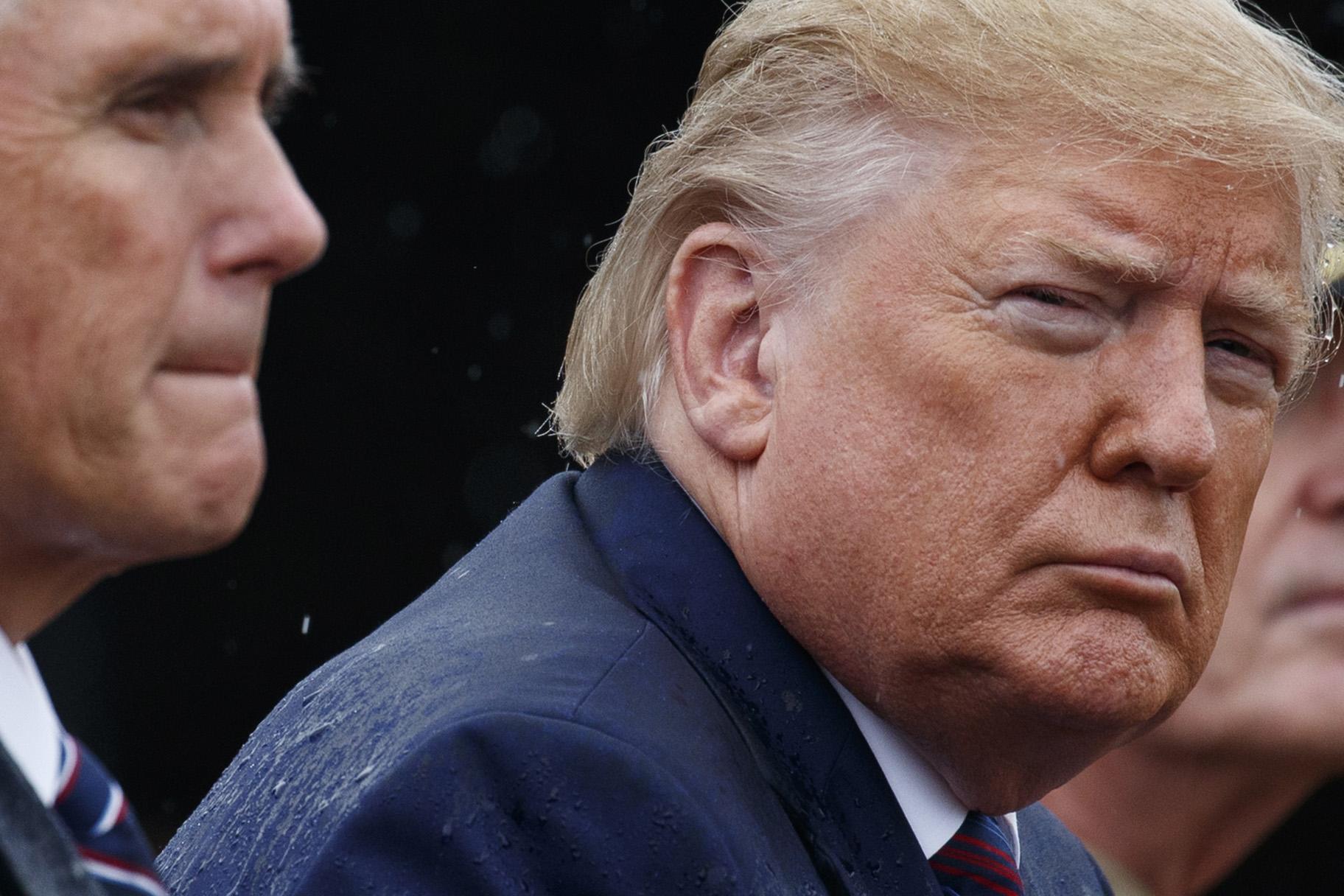 Some Trump supporters cheered Pompeo’s muscular response to the Democrats. But it also complicated the secretary’s own situation, coming the day after it was disclosed that he listened in during Trump’s phone call with Ukrainian leader Volodymyr Zelenskiy that helped trigger the impeachment inquiry.

“Any effort to intimidate witnesses or prevent them from talking with Congress – including State Department employees – is illegal and will constitute evidence of obstruction of the impeachment inquiry,” said three House chairmen, Adam Schiff of the intelligence committee, Eliot Engel of Foreign Affairs, and Elijah Cummings of Oversight.

They said that if he was on Trump’s call, “Secretary Pompeo is now a fact witness in the House impeachment inquiry.” And they warned, “He should immediately cease intimidating Department witnesses in order to protect himself and the President.”

The committees are seeking documents and voluntary testimony from the current and former officials as the House digs into State Department actions and Trump’s other calls with foreign leaders that have been shielded from scrutiny.

U.S. Rep. Raja Krishnamoorthi (D-Illinois), who sits on the intelligence committee, says a continued effort by Pompeo to delay or stop the testimony “would invite the inference that any blocked testimony would likely corroborate or be consistent with the whistleblower testimony.”

Pompeo said in a letter to the Democratic investigators on Tuesday that the requested dates for the officials to voluntarily appear for depositions, starting later this week, were “not feasible.” 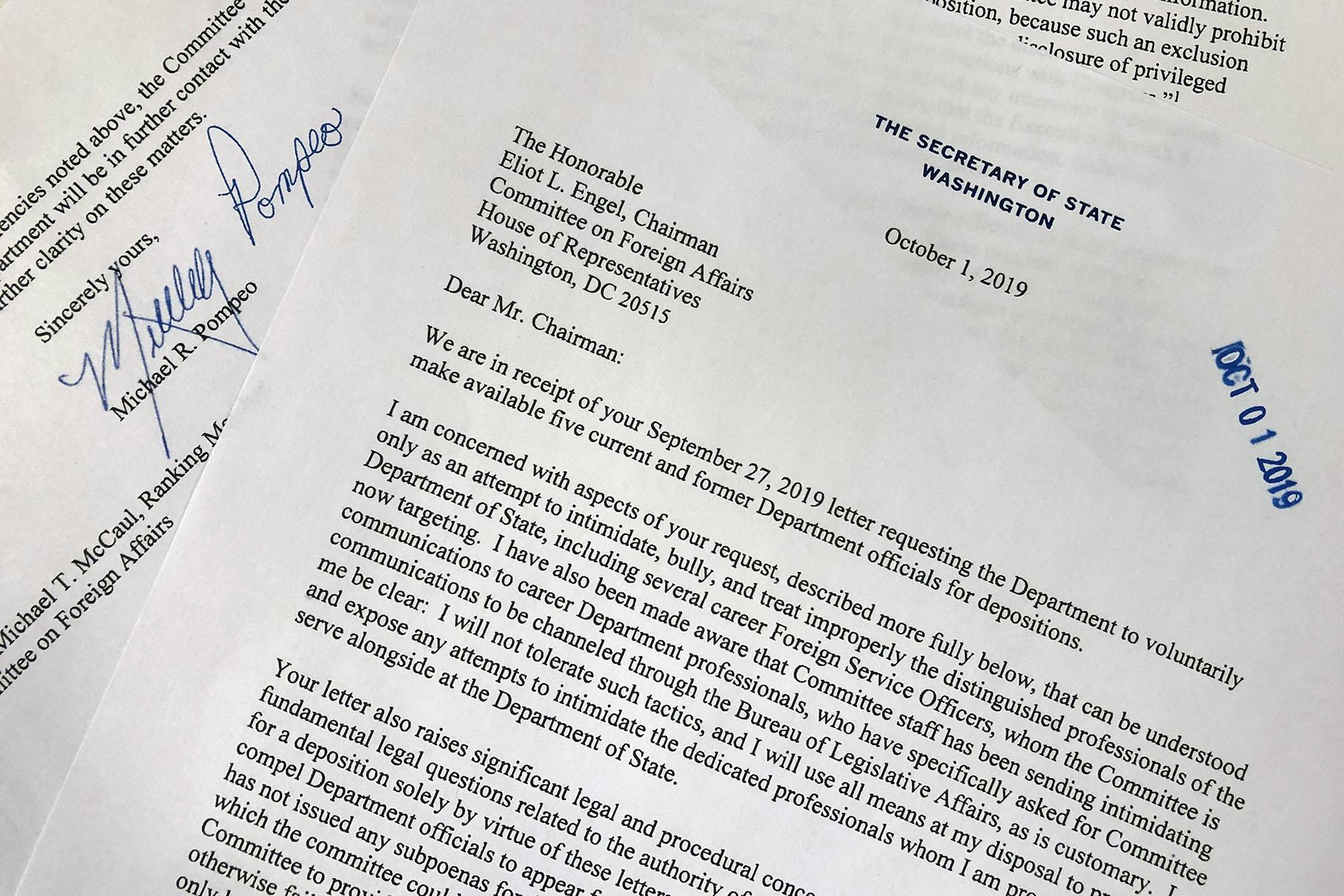 In halting any appearances by state officials, and demanding that executive branch lawyers accompany them, Pompeo is underscoring Attorney General William Barr’s expansive view of White House authority and setting a tone for conflicts to come.

When issuing a separate subpoena last week as part of the inquiry, the chairmen of three House committees made it clear that stonewalling their investigation would be fought.

“Your failure or refusal to comply with the subpoena shall constitute evidence of obstruction of the House’s impeachment inquiry,” the three chairmen wrote.

Democrats often note that obstruction was one of the impeachment articles against Richard Nixon, who resigned the presidency in 1974 in the face of almost certain impeachment.

The chairmen are seeking testimony over the next two weeks from officials including the former ambassador to Ukraine, Marie “Masha” Yovanovitch, and former special envoy Kurt Volker.

Volker played a direct role in arranging meetings between Rudy Giuliani, who is Trump’s personal lawyer, and Ukraine President Zelenskiy, the chairmen said, as part of a backchannel to Kyiv.

Volker, who has since resigned his position, is eager to appear as scheduled on Thursday, said one person familiar with the situation, but unauthorized to discuss it and granted anonymity. The career professional believes he acted appropriately and wants to tell his side of the situation, the person said.

The Democrats also want to hear from T. Ulrich Brechbuhl, a counselor at the State Department, who also listened in on the Trump-Zelenskiy call, they said.

It’s unclear whether Pompeo will comply with the committees’ request for documents by Friday. He had declined to comply with their previous requests for information.

Pompeo, traveling in Italy to meet with the country’s president and prime minister, ignored shouted question about the impeachment inquiry on Tuesday. 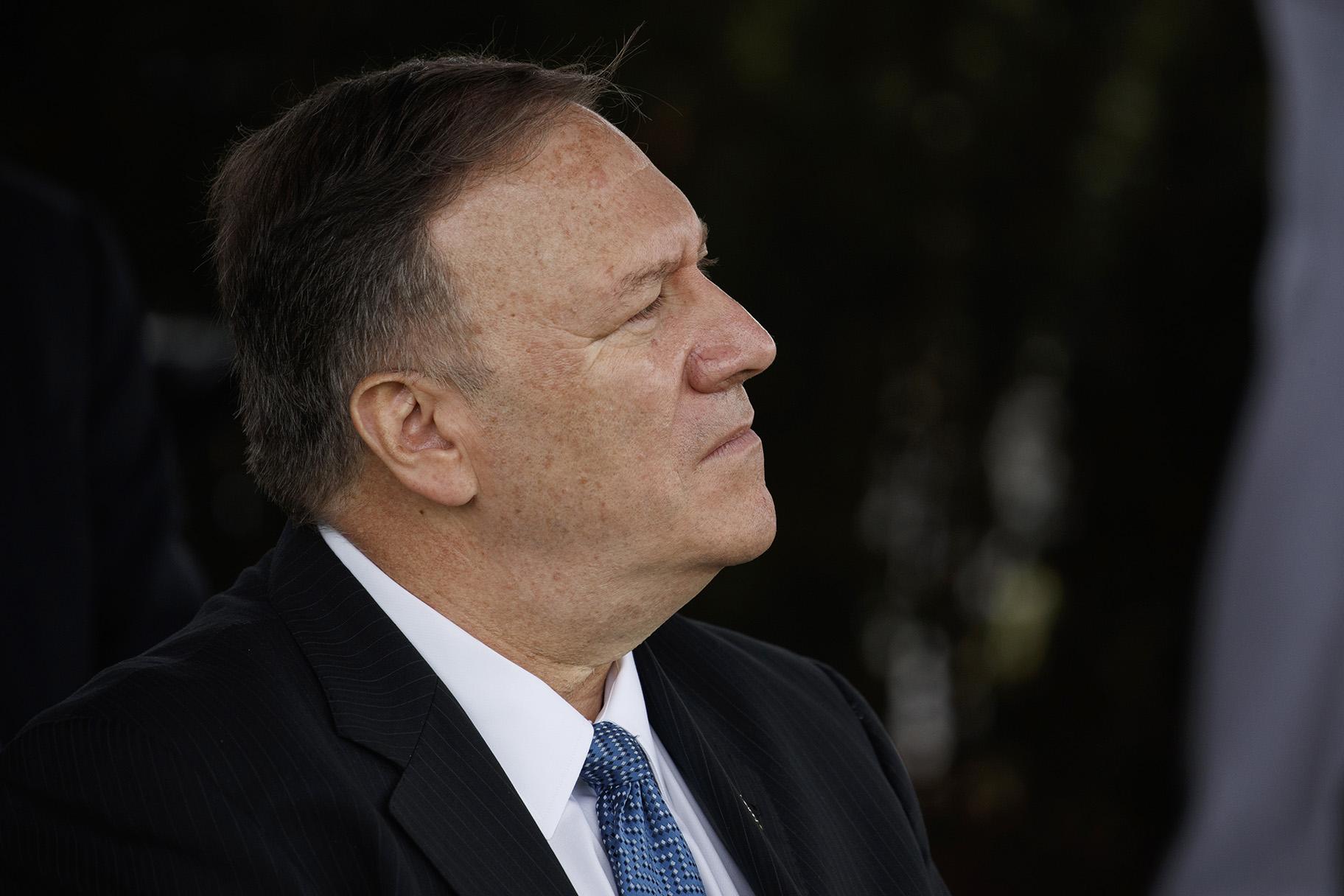 The House investigators are prepared for battle as they probe more deeply into the State Department to try to understand why the administration sought to restrict access to Trump’s conversations with foreign leaders.

The whistleblower alleged in an Aug. 12 letter to Congress that the White House tried to “lock down” Trump’s July 25 phone call with the new Ukrainian president because it was worried about the contents being leaked to the public.

In recent days, it has been disclosed that the administration similarly tried to restrict information about Trump’s calls with other foreign leaders, including Russia’s Vladimir Putin and Saudi Arabia’s Mohammed bin Salman, by moving memos onto a highly classified computer system.

“It’s going to be one heck of a fight to get that information,” Schiff told House Democrats during a conference call over the weekend, according to a person granted anonymity to discuss the private session.

As Trump continued to rage against the impeachment inquiry, there was little evidence of a broader White House response. And few outside allies were rushing to defend the president.

Trump has long measured allies’ loyalty by their willingness to fight for him on TV, and he complained bitterly this week that few had done so. And those that did, including House GOP leader Kevin McCarthy on CBS “60 Minutes,” he believed had flubbed their appearance, according to a person not authorized to publicly discuss private conversations.

Though there has been growing discontent with Giuliani in the West Wing and State Department, where some officials blame him for leading Trump into the Ukraine mess, the president continued to stand by his personal lawyer.

Giuliani, who hired former assistant special Watergate prosecutor Jon Sale a day after being hit with his own subpoena, continued to push false Biden corruption accusations and promised to fight against Democratic investigators.

The Ukraine matter remains the central focus as Democrats investigate whether Trump’s suggestion that the east European country’s new president be in touch with Giuliani and Barr to “look into” Biden amounts to a solicitation of foreign interference in the upcoming 2020 election.

The call unfolded against the backdrop of a $250 billion foreign aid package for Ukraine that was being readied by Congress but stalled by the White House.

Ukraine’s president told reporters Tuesday he has never met or spoken with Giuliani.

Zelenskiy insisted that “it is impossible to put pressure on me.” He said he stressed the importance of the military aid repeatedly in discussions with Trump, but “it wasn’t explained to me” why the money didn’t come through until September.

Not all business was halted between the White House and Congress. Even as the impeachment confrontation boiled, House Democrats briefed White House staffers on House Speaker Nancy Pelosi’s prescription drug legislation. Lowering drug costs is a top policy priority for both the speaker and the president. Joe Grogan, a top Trump domestic policy adviser, called it a “very productive start.”