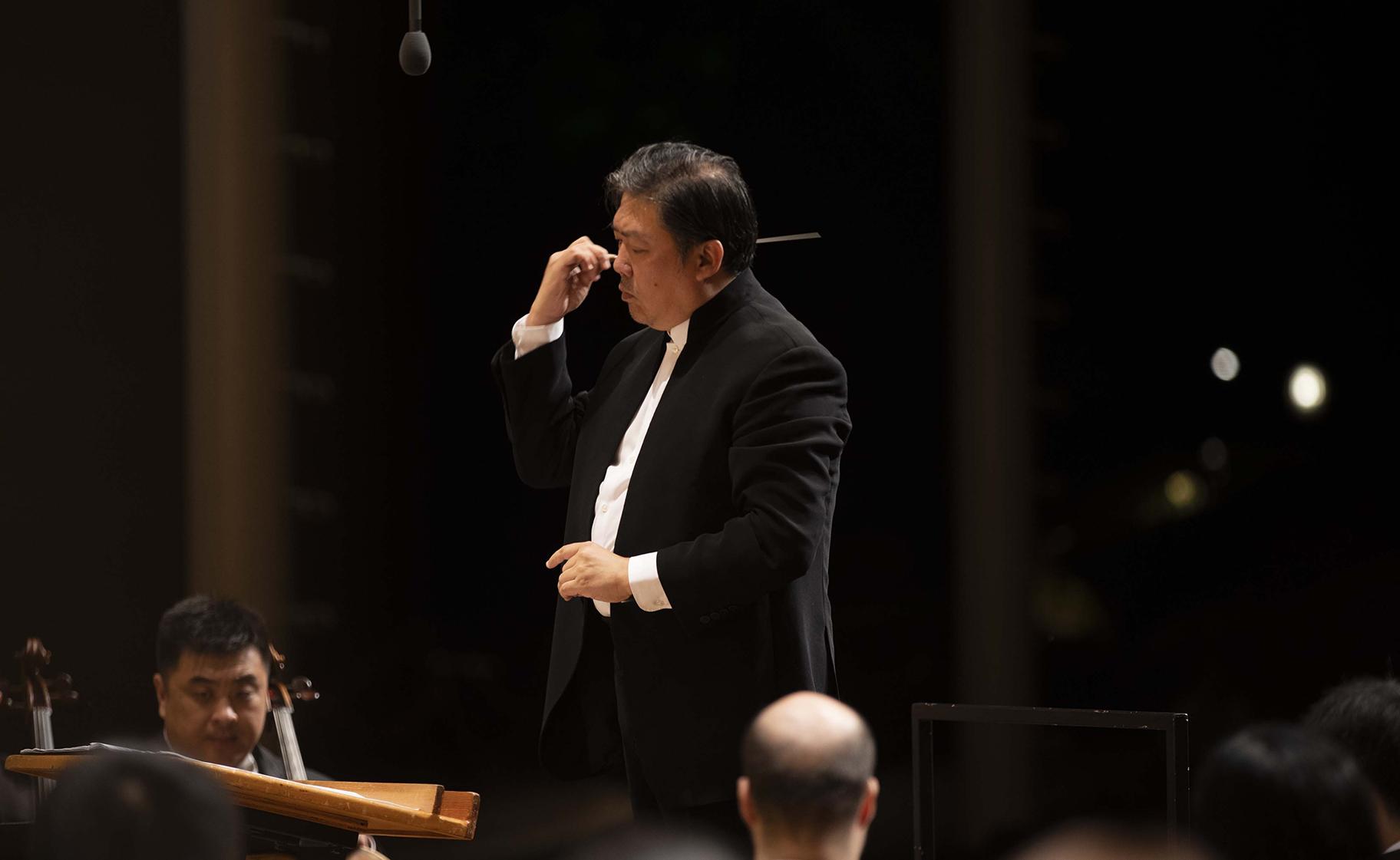 This past Friday evening marked the Ravinia Festival debut of the Shanghai Symphony Orchestra. And in addition to the beauty of the music there was this enduring thought: That the very best way to ease the current East-West tensions would be to send the politicians on both sides packing and let the musicians take over the job.

The bonding qualities of music were noted a week earlier by the American conductor Leonard Slatkin when he led the Chicago Symphony Orchestra. And in his charming way, conductor Long Yu, music director of the Shanghai Symphony, subtly seconded the motion with a program that featured the work of two contemporary Chinese composers (Qigang Chen and Yijun Huang), two Western composers (Dvorak and Rachmaninoff), the lustrous presence of an American guest artist (Alisa Weilerstein, the wonderfully feverish American cellist), and a surprising final gesture I will describe later.

The concert opened with Chen’s evocative “Wu Xing (The Five Elements),” comprised of brief movements that might best be described as pure musical poetry.

First came “Shui (Water),” with flutes, harp, strings, and vibraphone capturing the motion of that element. Next was “Mu (Wood),” with a distinctly Chinese sound, and the use of wood blocks and other percussion, as well as tapping on the violin and more. The brass section and bass drum helped capture the ferocity of “Huo (Fire),” and then came a more weighty suggestion of “Tu (Earth).” The noisy edginess of “Jin (Metal)” was conjured with a sharp opening sound, the use of brass and piano, and a bit of syncopation.

Weilerstein joined the orchestra in a stellar performance of Dvorak’s “Cello Concerto in B Minor,” a work of lush beauty, great melodic sweep and high emotion. And against the singing accompaniment of the polished, lyrical orchestra, the warmth and beauty, as well as the underlying strength of her playing was evident throughout. The Adagio movement of the work was particularly beautiful with Weilerstein’s velvety, singing tone complemented by the orchestra’s impressive wind section. And the interplay of orchestra and cellist in the quieter passages of the work was ideal. 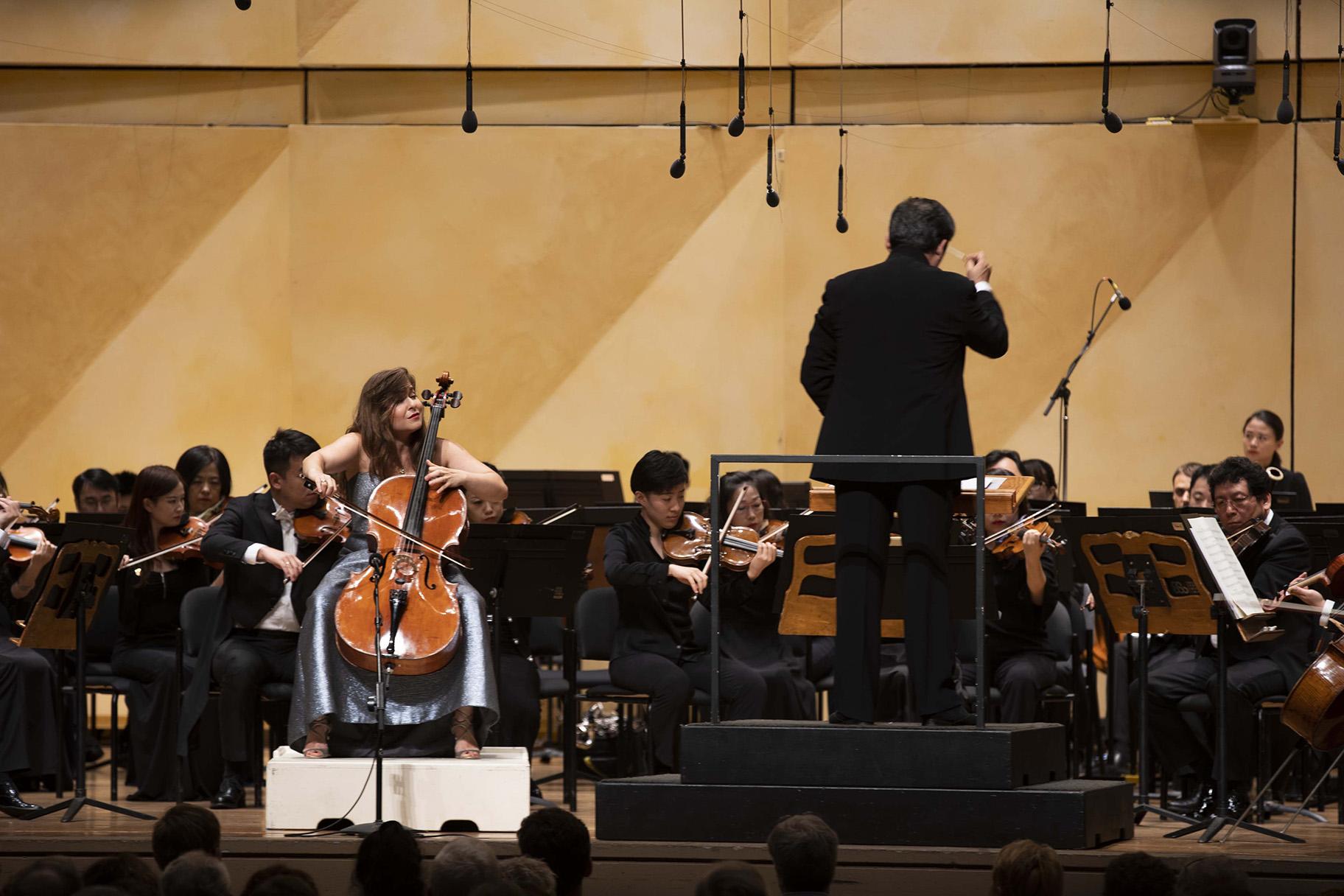 After many curtain calls Weilerstein and the orchestra launched into another Dvorak gem for an encore – a cello transcription of “O Silver Moon,” the famous aria from his opera “Rusalka.” The moon was silver; the playing was golden.

Rachmaninoff’s “Symphonic Dances,” opened the concert’s second half and showcased the orchestra in full romantic form, with vivid work by the strings, brass, piano, harp and percussion capturing the composer’s gorgeous melodies and dramatic rhythms. The second movement, in waltz time, surged to a thrilling climax, with Yu, an understated but highly effective conductor, in complete control. And then it was on to the final movement with its powerful sounding of church chimes and a great gallop and swirl of excitement to the end.

For an encore it was back to a Chinese composer with Huang’s “Enchanted Night,” a brief and beguiling example of “Chinese classical” music, fusing hints of both the pentatonic and diatonic scales. Beguiling.

And now for the evening’s surprise ending: For a final encore Yu stepped forward and spoke to the audience in impeccable English, recalling the moment in February 1972 when President Richard Nixon made his historic visit to China.

He noted that Premier Zhou Enlai had requested a special arrangement of “America the Beautiful” be played, and so it was (by the People’s Liberation Army Band), despite the dictates against Western music during what was known as The Cultural Revolution. Now, Yu and his orchestra proceeded to play a soaring, richly orchestrated version of the patriotic song that clearly touched the audience’s heart. Just an example of music as the finest form of diplomacy.