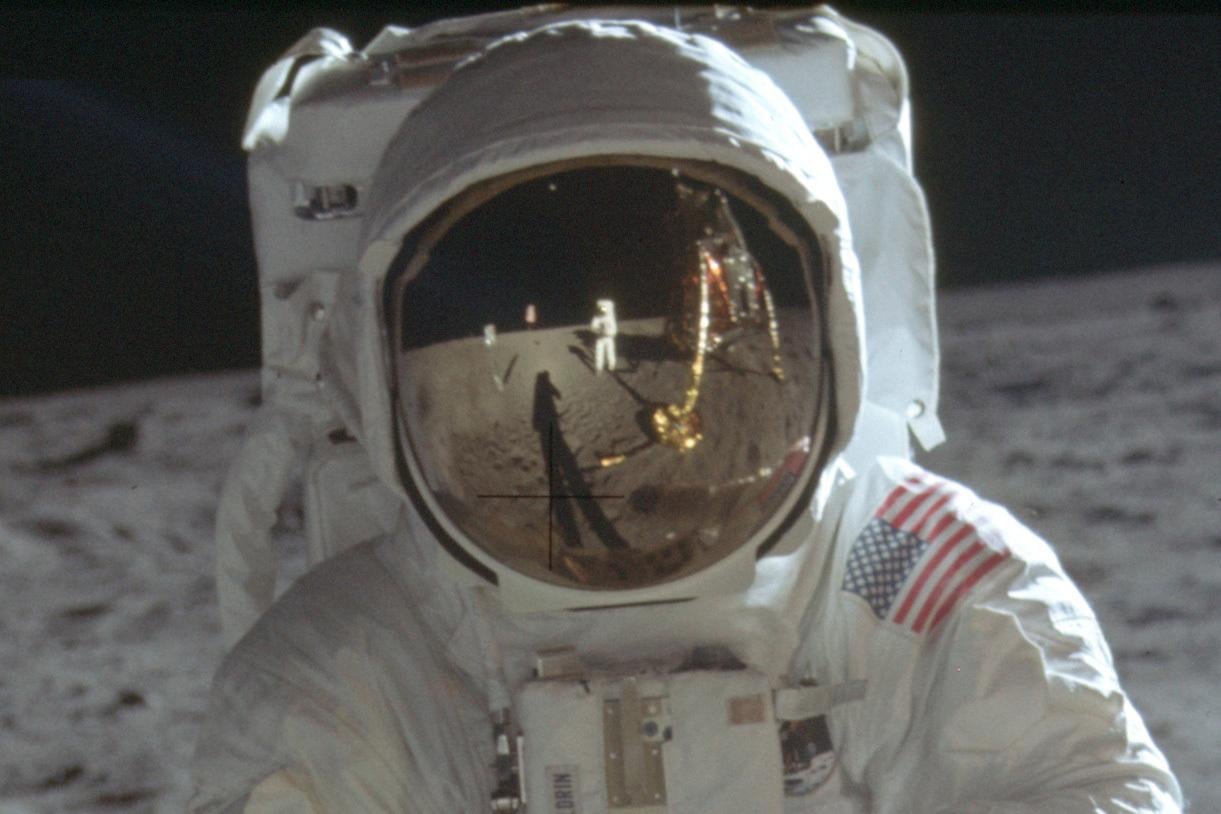 This detail of a July 20, 1969 photo made available by NASA shows astronaut Neil Armstrong reflected in the helmet visor of Buzz Aldrin on the surface of the moon. (Neil Armstrong / NASA via AP)

NEW YORK (AP) — Fifty years after Neil Armstrong and Buzz Aldrin walked on the moon, some people insist it never happened and was all a big hoax by the U.S. government.

The suspicions arose even as the lunar landing was taking place in 1969, said Roger Launius, NASA’s former chief historian. Soon, conspiracy theories that said it was an elaborate, Hollywood-style production created on a soundstage on Earth started to take root.

The notion is treated mostly as a punchline, as in a new commercial for Red Bull. But public opinion polls over the years have consistently shown roughly 5% to 6% of Americans believe the moon landing was faked, Launius said.

Aldrin once ran into one of those people in 2002 and punched him in the face after the man called the former astronaut a liar.

Here’s a look at some of the most common claims and how they're explained away:

CLAIM: The American flag in photos from the moon looks as if it’s flapping in the wind. That would be impossible, since there’s no air on the moon.

THE FACTS: Rather than let the flag droop, NASA decided to use a right-angled rod to keep it spread out, according to Launius. Armstrong and Aldrin accidentally bent the rod a little bit, making it look as if the flag was in motion. They were also worried that the flagpole was going to fall down after they had twisted it into the ground, so they quickly snapped the photos, capturing the flag while it was still moving, Launius said. 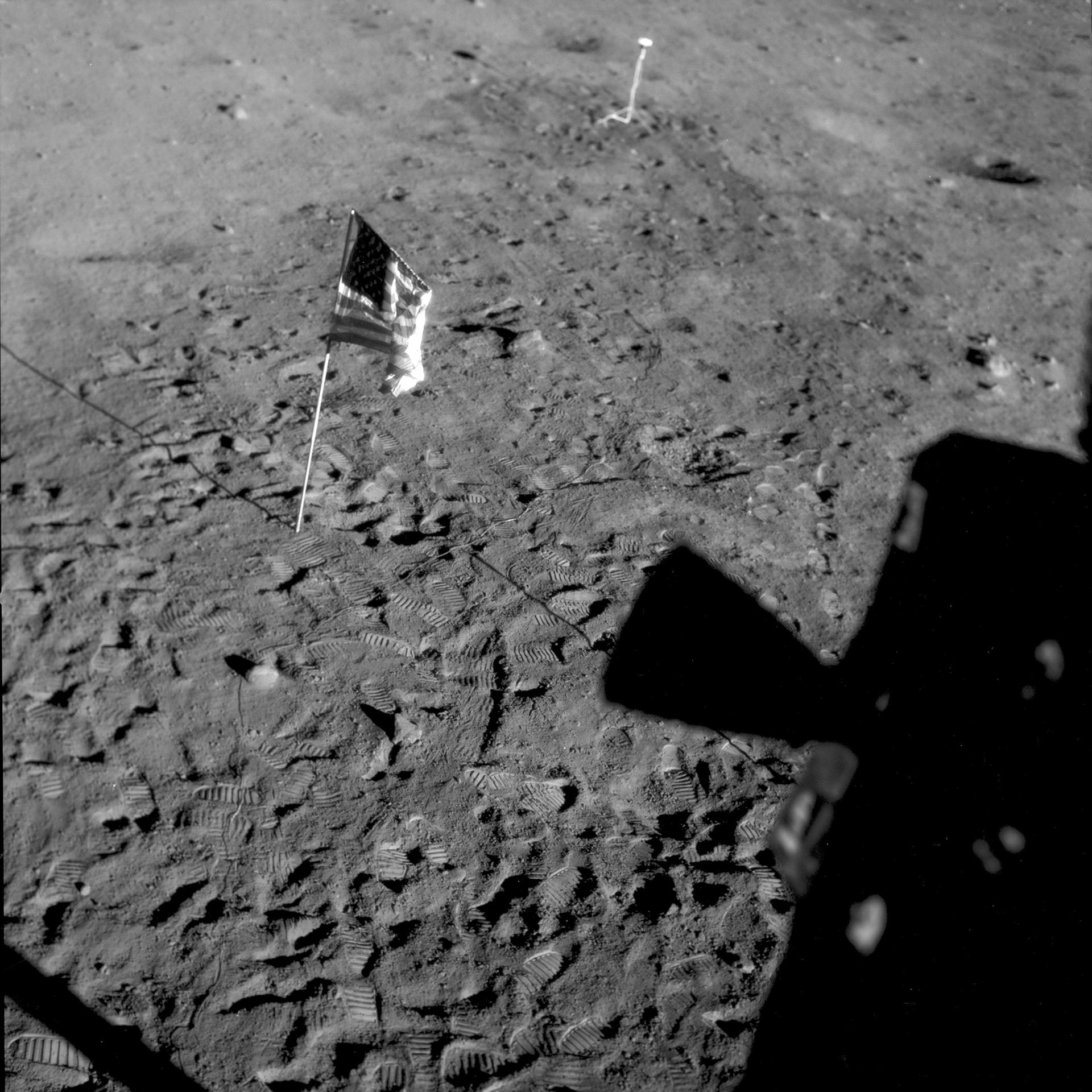 This July 21, 1969 photo made available by NASA shows the U.S. flag planted at Tranquility Base on the surface of the moon, and a silhouette of a thruster at right, seen from a window in the Lunar Module. (NASA via AP)

CLAIM: No stars show up in the background of any photographs because NASA knew astronomers would be able to use them to determine whether the pictures were taken on Earth or the moon.

THE FACTS: The shutter speeds on the astronauts’ cameras were too fast to capture the faint light of the stars, astronomer Emily Drabek-Maunder at the Royal Observatory Greenwich in London said. NASA used high shutter speeds to make sure the pictures weren’t overexposed from the bright light on the moon. 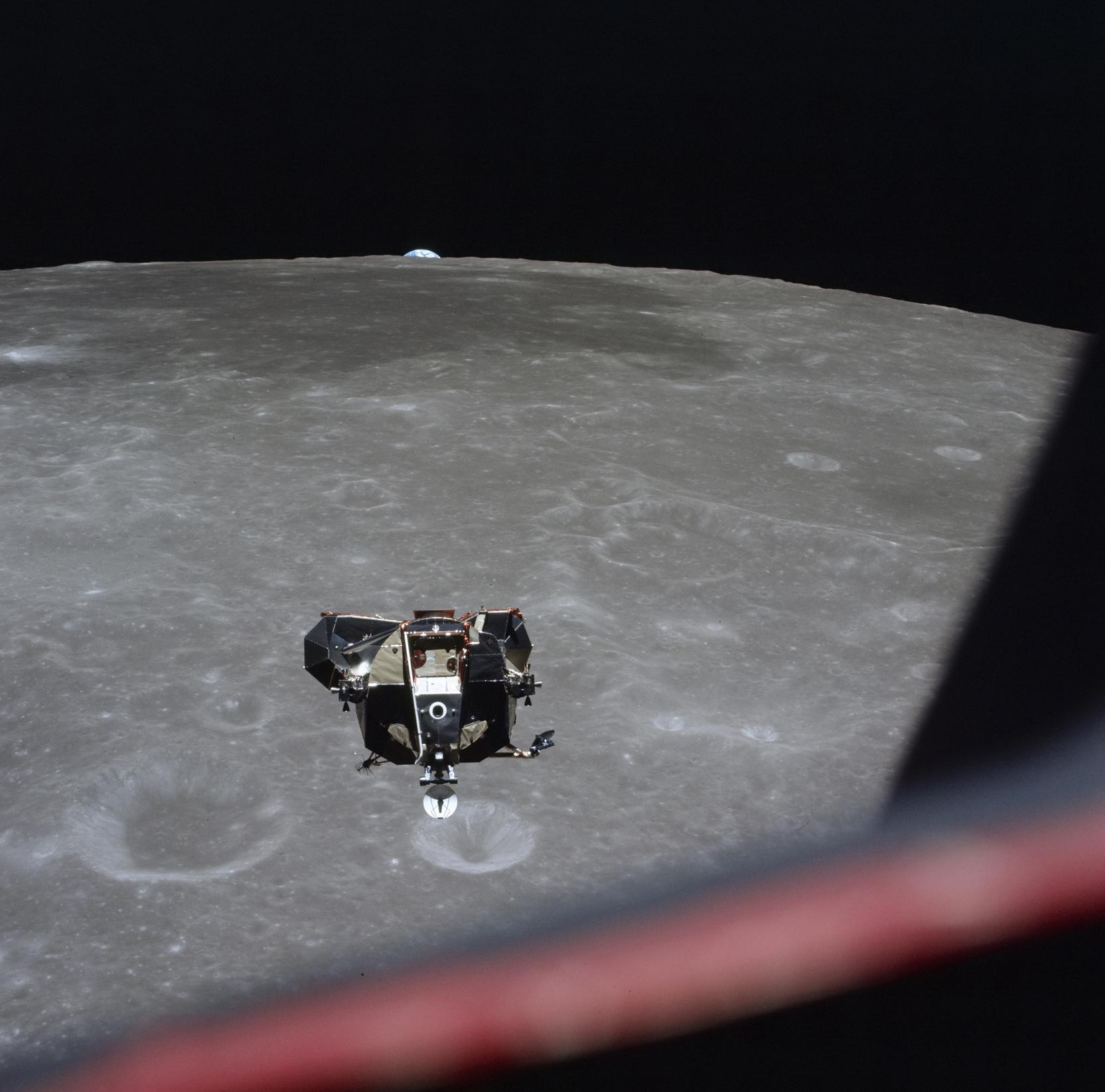 This July 21, 1969 photo made available by NASA shows the Lunar Module approaching the Command Module with the Earth visible behind the moon. (Michael Collins / NASA via AP)

CLAIM: When the lunar module descended onto the moon’s surface, it didn’t scatter any dust and didn’t leave a crater from the rocket blast that slowed its descent.

THE FACTS: In landing on the moon, the astronauts were traveling horizontally for a while, so the thrusters weren’t pointed down and wouldn’t have kicked up any dust, Drabek-Maunder said. But when the module finally did touch down, “you can see dust actually being thrown up.”

As for the lack of a crater, Launius said the astronauts did’t need to use a large blast to slow themselves down, because the moon’s gravity is roughly one-sixth that of Earth’s. “It was more of a gentle landing,” he said. 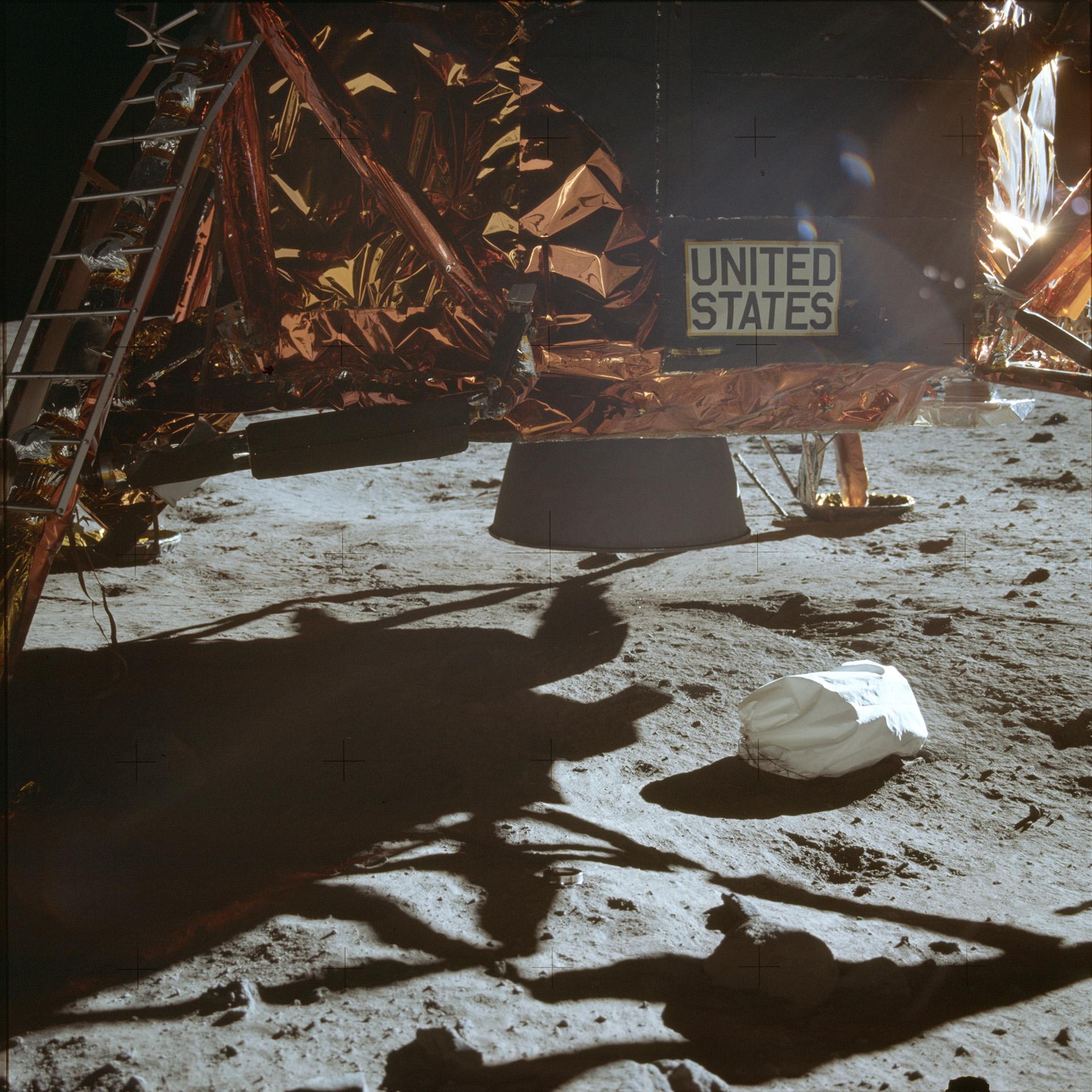 This July 20, 1969 photo made available by NASA shows the Lunar Module descent stage and area of soil beneath. (NASA via AP)

CLAIM: Armstrong and the lunar module are seen reflected in Aldrin’s helmet visor in an iconic photo of Aldrin in his spacesuit on the moon. But there’s no sign that either astronaut is holding a camera. So who took the picture?

THE FACTS: The astronauts’ cameras were mounted on their chests, Drabek-Maunder said. As a result, Armstrong did not have to hold his up to his eye. His hands, in fact, appear to be near his chest in that picture.

This detail of a July 20, 1969 photo made available by NASA shows astronaut Neil Armstrong reflected in the helmet visor of Buzz Aldrin on the surface of the moon. (Neil Armstrong / NASA via AP)

CLAIM: The angle and colors of the shadows in photographs from the moon are inconsistent, suggesting artificial lights were used to illuminate a set.

THE FACTS: The many bumps, craters and hills on the moon, along with the various light sources that illuminate it — light directly from the sun, light reflected off the moon’s surface and light reflected off the Earth — cause what look like distortions and inconsistencies, Launius and Drabek-Maunder said. Also, the astronauts’ cameras had wide-angle lenses that can distort objects.