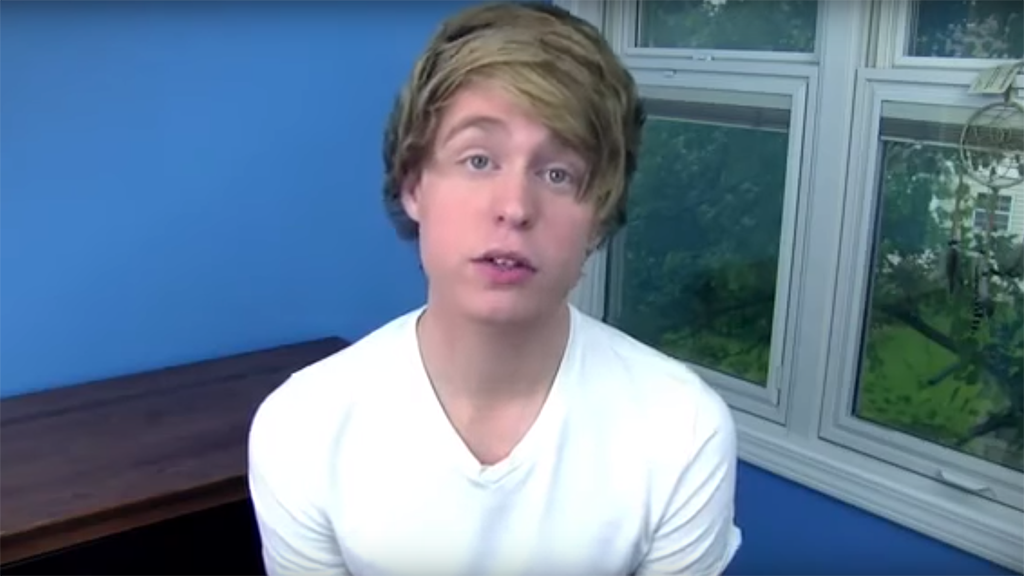 Former YouTube star Austin Jones spent months convincing several of his underage female fans to send him dozens of sexually explicit videos as he told them what to say, what to wear and how to act in the videos. Now he’ll spend a decade in federal prison.

A federal judge in Chicago on Friday sentenced the Bloomingdale, Illinois, musician and internet personality to 10 years is prison after the 26-year-old pleaded guilty earlier this year to one count of receiving child pornography.

A plea agreement published in February details Jones’ interactions with six teen victims he convinced to send him several dozen videos between August 2016 and May 2017. But federal prosecutors say Jones also attempted to entice approximately 30 other underage girls into sending him similar videos before his arrest at O’Hare International Airport in June 2017.

“He used his position as a famous musician to persuade and entice his victims to send him pornographic videos, promising these girls modeling opportunities, Instagram followers, and his attention,” U.S. Attorney John Lausch and Assistant U.S. Attorney Katherine Welsh wrote in a sentencing memorandum last month. “He preyed on their youth, their vulnerabilities, and most glaringly, their adoration of him, and he did it over and over again.”

Since his career began in 2007, Jones had amassed a large following online, including nearly 550,000 subscribers to his YouTube channel. Videos of his a capella covers of songs amassed tens of millions of views.

But allegations of sexual misconduct arose years before his arrest. Jones was accused in 2015 of contacting underage fans and asking them to send him videos. But he claimed these only involved girls “twerking” and said “nothing ever went beyond that.”

A year later, the National Center for Missing and Exploited Children began receiving reports from Facebook indicating Jones had been using his social media account to chat with underage girls and ask them to send sexually explicit videos.

Jones’ interactions with his victims often followed a similar pattern, according to prosecutors. He would contact the girls using the Facebook Messenger or Apple iMessage apps and entice them into recording themselves “dancing in a sexual manner” or “performing sexual acts.” Jones would tell the girls they were “lucky” to have his attention and asked them to “keep proving your (sic) my biggest fan.”

He also told the victims specifically what to do and how to act in the videos, often telling them to say their age repeatedly as they recorded, prosecutors state.

Jones contacted one 15-year-old victim about a modeling opportunity in April 2017 and told her specifically what to wear as she began recording videos for him. At one point, the girl asked if they could “finish this tomorrow” because she had to go to school in the morning.

“No, right now,” Jones demanded, according to the sentencing memo. “I’m taking a huge chance on you. And you don’t even seem like you want it.”

Shortly after his arrest, Jones confessed to investigators, admitting he had enticed the girls to send him videos for his own sexual pleasure. Prosecutors said Jones “preyed upon the insecurities” of his victims and “pushed past (their) cries for help.”

“He didn’t know his victims, and he didn’t physically coerce them into doing his bidding,” Lausch and Welsh wrote in the memo. “He didn’t have to. Instead, he used the tool that he had at his disposal: his fame.”

Jones’ YouTube channel was terminated in February after he entered his guilty plea. He faced a minimum of five years in prison. Prosecutors had sought an 11-year sentence.

While acknowledging the “deplorable nature” of Jones’ conduct, his attorneys claimed it would be unfair to judge him solely by the “worst of his conduct” while ignoring what they say was an “unfortunate upbringing” and the positive contributions Jones has made.

They claim Jones was sexually abused by his father for years, which led to panic attacks and post-traumatic stress disorder, and say he’s remorseful for his crimes. His attorneys had asked for a minimum sentence, citing “the ruinous, life-changing consequences that would otherwise result.”