Chicago high school students, with some guidance from WTTW, recently produced stories showcasing one family’s journey from Bangladesh to Chicago and an open mic event sponsored by Grammy-winning artist Chance the Rapper.

“With the field trip, I really like how I was able to see what real broadcast is like – like real TV,” said student Tajkeya Sultana. “It was very interesting to see how they go live with the news and how they edit.”

The nine students, comprised of eight seniors and one junior, are in a third-year journalism class that produces a weekly show called “Senn TV.”

“They cover school news, filming most events at the school, getting interviews, providing previews of what will happen the following week,” said teacher Michael Cullinane.

After discussions between the students and members of the “Chicago Tonight” team, the class split into two groups with the goal of producing two stories: a profile of Sultana’s Bangladeshi family in Chicago and a video covering OpenMike, a monthly showcase for CPS students to display their talent sponsored by Chance the Rapper’s SocialWorks nonprofit.

Students learned how covering each story required a different set of skills. For the open mic event, students had just a few hours to obtain the footage and interviews they needed to cover a single-night event.

“For me, I’ve never been to an open mic before, so I didn’t know what to expect,” said student Oscar Marquez. “So it was kind of hard for me to get out of my comfort zone and actually ask people for an interview.”

But Marquez said the learning experience helped prepare him for the future.

“Now, if I was to do it again, I wouldn’t hesitate to ask anyone for an interview,” he said.

Circumstances were different for the profile about the Sultanas – a mother and five daughters who emigrated from Bangladesh to the U.S. in 2011 to find a better life. Tajkeya Sultana had plenty of access and time to film and interview her mother and sisters. Her group ended up with roughly six hours of footage to edit into a short, compelling video story.

Student Olabisi Efunnuga said the editing process helped her learn how to better collaborate with fellow storytellers in order to achieve a shared vision.

“People had different views of how they wanted the video to turn out,” Efunnuga said. “When we first started it was kind of rocky, but it got better because everybody in the group took each other’s ideas.”

Through both stories, students were exposed to a spectrum of storytelling methods and production styles.

“I compare a project like the ‘Sultana Sisters’ to a sculpture that’s a giant block of stone and you cut all the excess away to make a piece happen,” Cullinane said. “And the open mic was a glob of clay and [the students] had to use everything, even if they didn’t get much, to form it into something that makes sense.”

Throughout the process of creating these stories, Cullinane and his students communicated with WTTW Community Engagement Director Jessica Lawson and yours truly – I’m a “Chicago Tonight” producer. We visited Senn High School in December to give feedback on the students’ stories.

“I feel like the students learned a lot about how you can take what you have and make it into a more consumable story for the public,” Cullinane said. “More than anything, I think WTTW helped us to see not just that we’re making a good video, but a video that the audience would appreciate and want to watch.”

Cullinane said the students will continue producing weekly “SennTV” shows until graduation in the first week of June.

A New Champ is Crowned at the CPS Spelling Bee 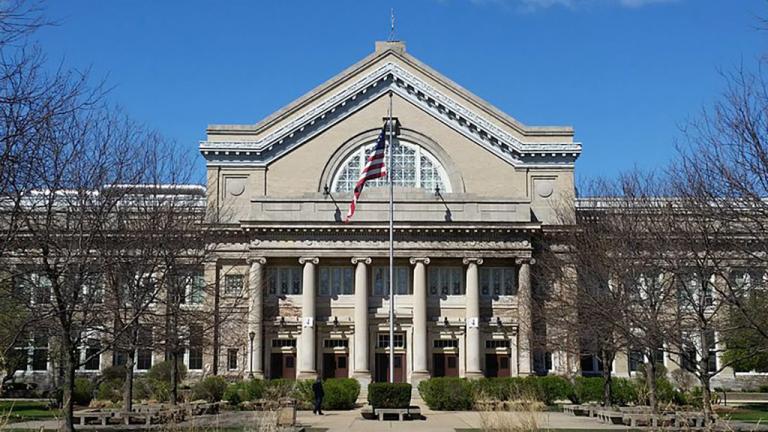