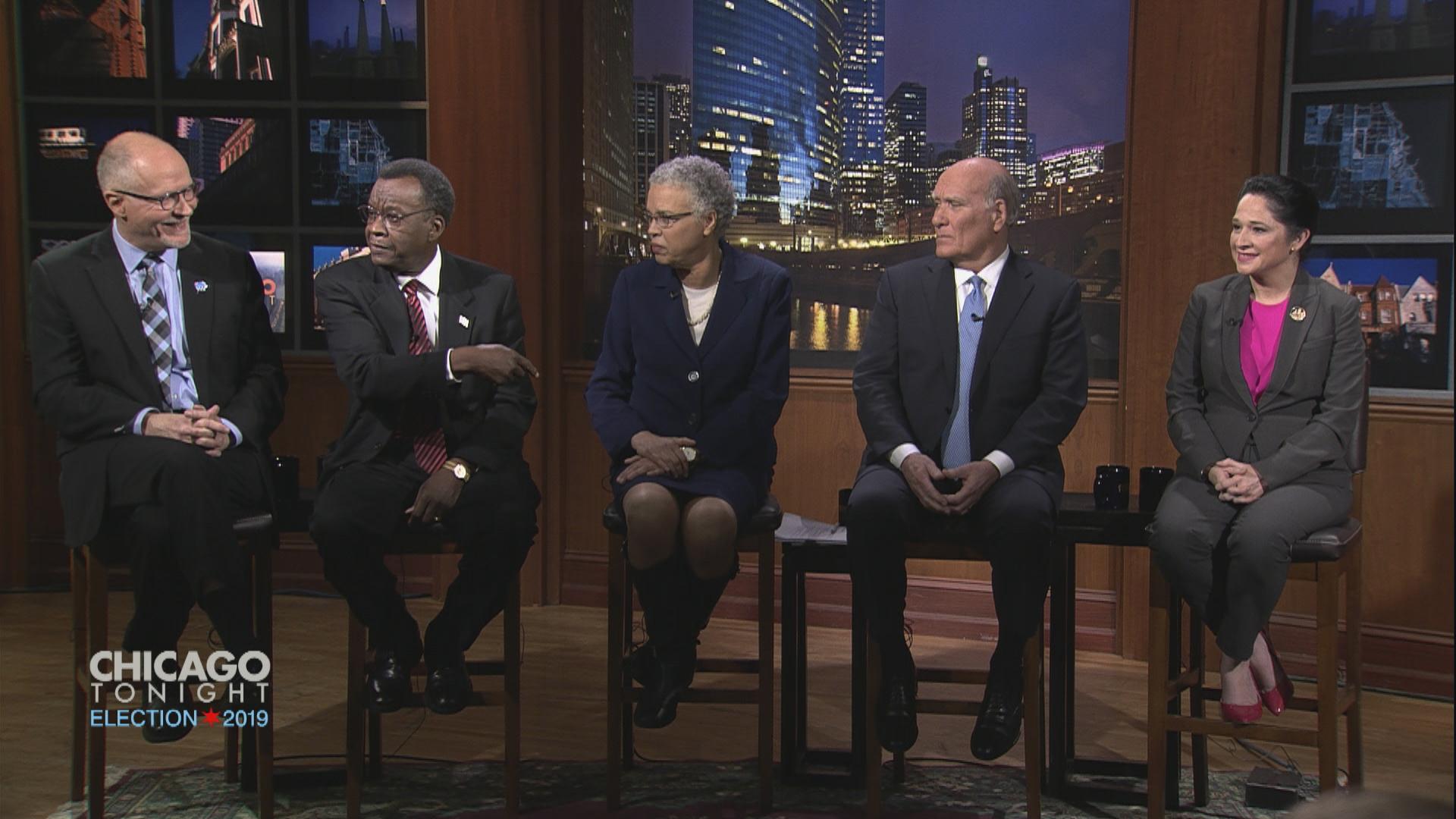 With a little more than one week left until the election for Chicago mayor, five of the perceived front-runners amped up their rhetoric in WTTW’s second of three candidate forums.

Paul Vallas, Willie Wilson, Toni Preckwinkle, Bill Daley and Susana Mendoza sparred on ethics, taxes, education, crime and other issues during a “Chicago Tonight” forum Monday hosted by Phil Ponce. But the most contentious moment of the night came when Mendoza called Daley a “liar” for saying he didn’t advise his brother, former Mayor Richard M. Daley, in the much-maligned sale in 2008 of Chicago’s parking meters.

“I did not advise my brother on that deal,” Daley said repeatedly. “In hindsight, we can all pick it apart.”

Preckwinkle, who served as City Council’s 4th Ward alderman, brought up the fact that she was one of only five “no” votes on the deal.

“We should have never sold off that asset,” she said.

“We obviously can’t have a police officer on every street, but we can give a level of comfort to people that we’re doing everything we can,” he said.

Wilson objected to hiring any more police officers to solve the problem.

“This is Chicago, it’s not Vietnam,” he quipped.

Vallas repeated his call to hire back retired detectives to help solve homicides and drive up the city’s so-called clearance rate.

Preckwinkle said the answer was in restoring trust between residents and the police.

“The best instrument we have to fight violence is better collaboration and cooperation between the police and community,” she said.

The candidates had some policy agreements on city finances, specifically on how to find an extra $1 billion by 2023 for mandatory payments into the city’s depleted pension systems. While all candidates said no to higher property taxes, four of the five candidates said they supported raising the real estate transfer tax – a tax on the sale of properties – to bring in needed revenue. Mendoza said she supported it on properties worth more than $1 million. Wilson opposed any tax increases.

Daley said he also advocates for a change to the state constitution that would allow a reduction to pension raises for retirees, something that Gov. J.B. Pritzker has opposed.

“I’m not trying to screw the retirees,” Daley said during a post-forum press conference. “But government does not exist just to serve city employees.”

Mendoza said she opposes a constitutional amendment, and tied Daley’s position to his previous role on the transition team of former Gov. Bruce Rauner in 2014. Daley has reported $2 million in recent contributions from the state’s wealthiest resident, billionaire Citadel CEO Ken Griffin.

Vallas says he believes a constitutional amendment will never happen, and that he’s the only candidate with a detailed plan to put money into the pension systems.

The candidates also agreed on the need for increased funding for mental health services, with Vallas saying that cannabis and casino revenue should be earmarked for that. Mendoza and Preckwinkle tied the issue to the city’s rate of incarceration.

“People ask how can we afford to pay for it?” Mendoza said. “We’re already paying for it. It costs $40,000 to incarcerate someone.

All five candidates agreed to a ban on outside employment for aldermen. Four of the five agreed to ending aldermanic prerogative, in which aldermen have near universal veto power over licensing, real estate and permitting proposals in their wards. Preckwinkle was the lone dissenter.

Preckwinkle and Mendoza faced heat again for their ties to Ald. Ed Burke, who was recently charged with one federal count of attempted extortion. Mendoza was asked why she chose to get married in the Burke household.

“(Illinois Supreme Court Justice) Anne Burke was a role model of mine,” she said, noting that Burke had offered to perform the ceremony for her. Preckwinkle shrugged off questions about campaign money Burke has raised for her.

“I served with Ed Burke for almost 20 years. He was neither a friend or an ally. The critical issue is the dual employment issue,” she said.

Mendoza, who has seen herself trailing behind Daley and Preckwinkle in many of the polls that have been commissioned in this race, also dinged Preckwinkle for sticking by former Cook County Assessor Joe Berrios after an investigation by the Chicago Tribune found the system he presided over to be “fundamentally flawed.”

“Preckwinkle honored Berrios with a lifetime achievement award after that investigation had come out,” Mendoza said.