Over the last 40 years, Chicago churches of all sizes and denominations have seen a precipitous drop in attendance and membership. As congregations and coffers shrink, some are closing the doors on historic houses of worship that have anchored neighborhoods for generations.

Many of the old buildings, which are notoriously difficult and expensive to maintain, have fallen into disuse and disrepair, causing preservationists to scramble to save them from demolition.

But a recent wave of developers snapping up neighborhood churches to convert into pricey private residences has preservationists and communities shifting their focus from saving the buildings themselves to questioning how the former houses of worship are used in their next iterations.

Poll: Do conversions save or spoil historic churches?

Logan Square Preservation President Andrew Schneider recently expressed dismay on Twitter about the conversion of the former Church of the Advent into pricey apartments – one tweet in particular addressed the reuse of the church’s altar as a kitchen island.

Schneider says that issues of taste aside, a more important concern is that developers have an unfair edge over congregations in high-value markets.

“Church hierarchies are making big-picture decisions, and in a gentrifying neighborhood like Logan Square when you have a small congregation with a valuable piece of real estate, I think that’s very difficult to ignore,” he said. “Developers can outbid congregations on these purpose-built structures, and I think that gets to the relationship between gentrification and residential reuse. In the case of Church of the Advent, if there wasn’t a strong market for developers for the building, would there have been a path to keep the doors open and the congregation functioning? I think yes.”

But one of the architects behind the Church of the Advent project points out that the input of community groups and officials is sought out before any changes are made.

“In all of our religious conversions, we will have meetings with community groups and representatives and the alderperson,” said Jean Dufresne, principal at Space Architects + Planners. “We also will meet with the city Landmark Commission, as most of these projects are historically contributing structures. The process starts with the community group. Without their support, the project would not move forward. 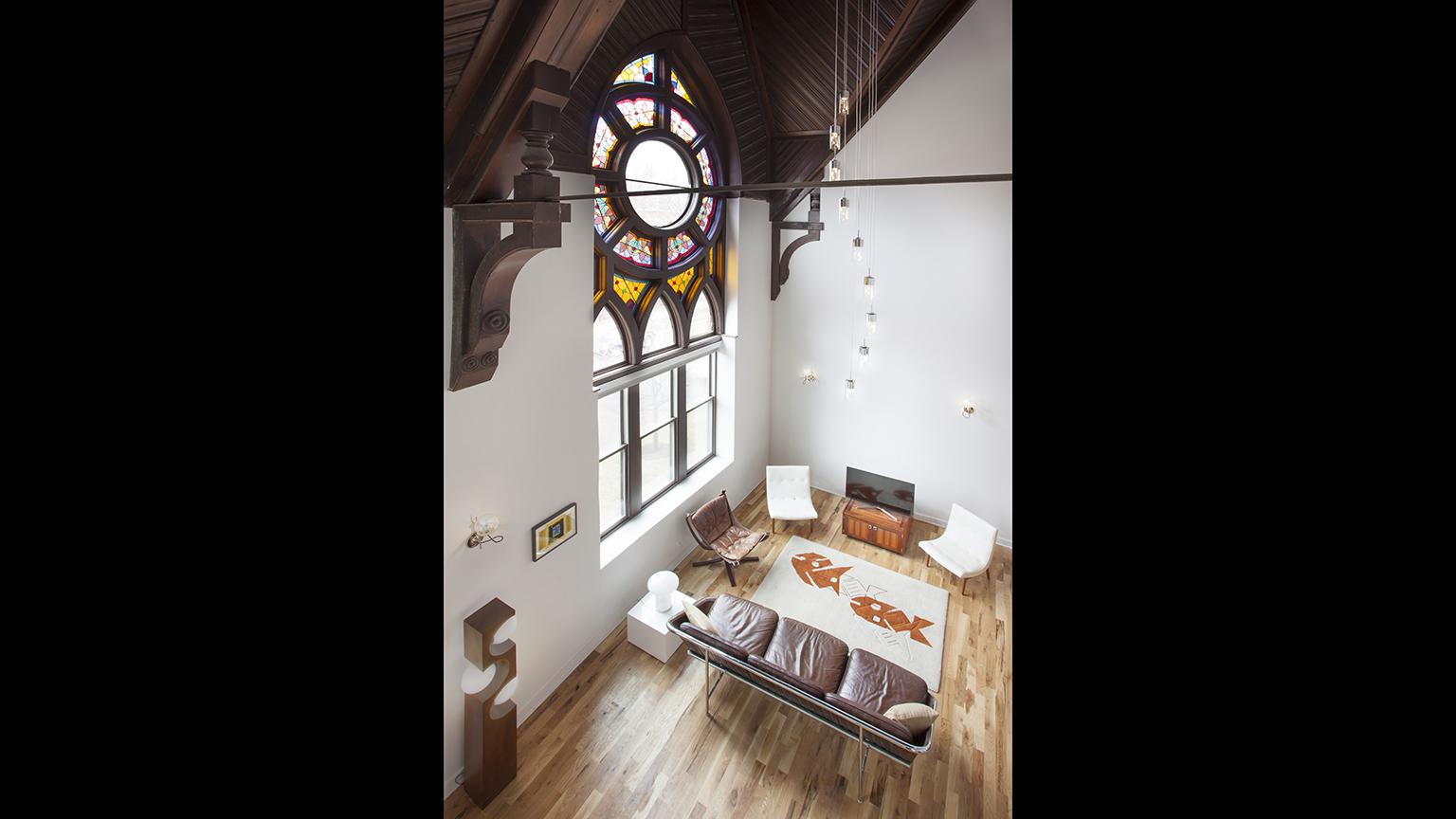 A rendering for proposed apartments at the former Church of the Advent in Logan Square. (Courtesy Space Architects + Planners)

“We then secure aldermanic support,” Dufresne continued. “The Landmark Commission review and approval is often concurrent with any zoning relief we are seeking for the project, such as parking relief or yard reductions.”

Dufresne’s stance is that when churches close and their original purpose is void, the primary reason to save them is for their historic and architectural value.

“Once the religious function of the church has gone, to me, the building becomes an architectural relic which deserves to be preserved, but no longer embodies religious practice,” he said. “We saved a gorgeous building from being demolished. It is still standing for people to view and enjoy, and to tell the stories of its construction and service to the community.”

While Schneider acknowledges that preserving the building’s street appearance is better than losing the building entirely, he said that churches’ role as community buildings make them a special case when considering their reuse.

“When you’re talking about a nonprofit use like a church, it doesn’t produce in the same way a rental property or condo project would, and yet we don’t regard their use as without value,” he said. “It’s easy to drive or walk by these churches and think the only way they contribute is through their physical beauty, but the relationship between the buildings and the community is more subtle and complex.

“I acknowledge that as congregations have shrunk that not every such building can remain in its historic function,” he continued, “but we should explore that first before automatically assuming a residential reuse is just the right call.”

Back to that altar turned into kitchen island that some on Twitter found objectionable. Dufresne says the Episcopal Diocese left it behind – and argues that repurposing the altar saved it from a landfill.

“They could have taken all of the contents of the church with them and done what they saw fit with it,” he said. “They did not do any of that ... I do not have an issue with an altar becoming a kitchen island. At least people will appreciate it. I have an issue with these things ending up in a landfill.”

The Church of the Advent’s last treasurer, Todd van Alstyne, describes a more complicated situation than Dufresne suggests. He calls the reuse of the altar and other sacred objects “at best distasteful,” but he also blames the Episcopal Diocese for their treatment of the church.

“Members of the congregation were informed that the building and all of its contents belonged to the diocese,” he said. “We were not allowed to remove any items … We had thought the diocese would have taken care to remove all sacramental furniture, memorial plaques, etc.

“When I was contacted by Andrew [Schneider] who told me that the diocese did not remove any of the sacramental furniture, World War II memorial plaques and other memories left by generations of parishioners, we frantically sprang into action removing as much as we could,” he continued. “I asked the diocese why they did not remove anything. I was told it was too expensive to do so. We thought that some of the money from the sale surely could have been used to close the church in a holy way.”