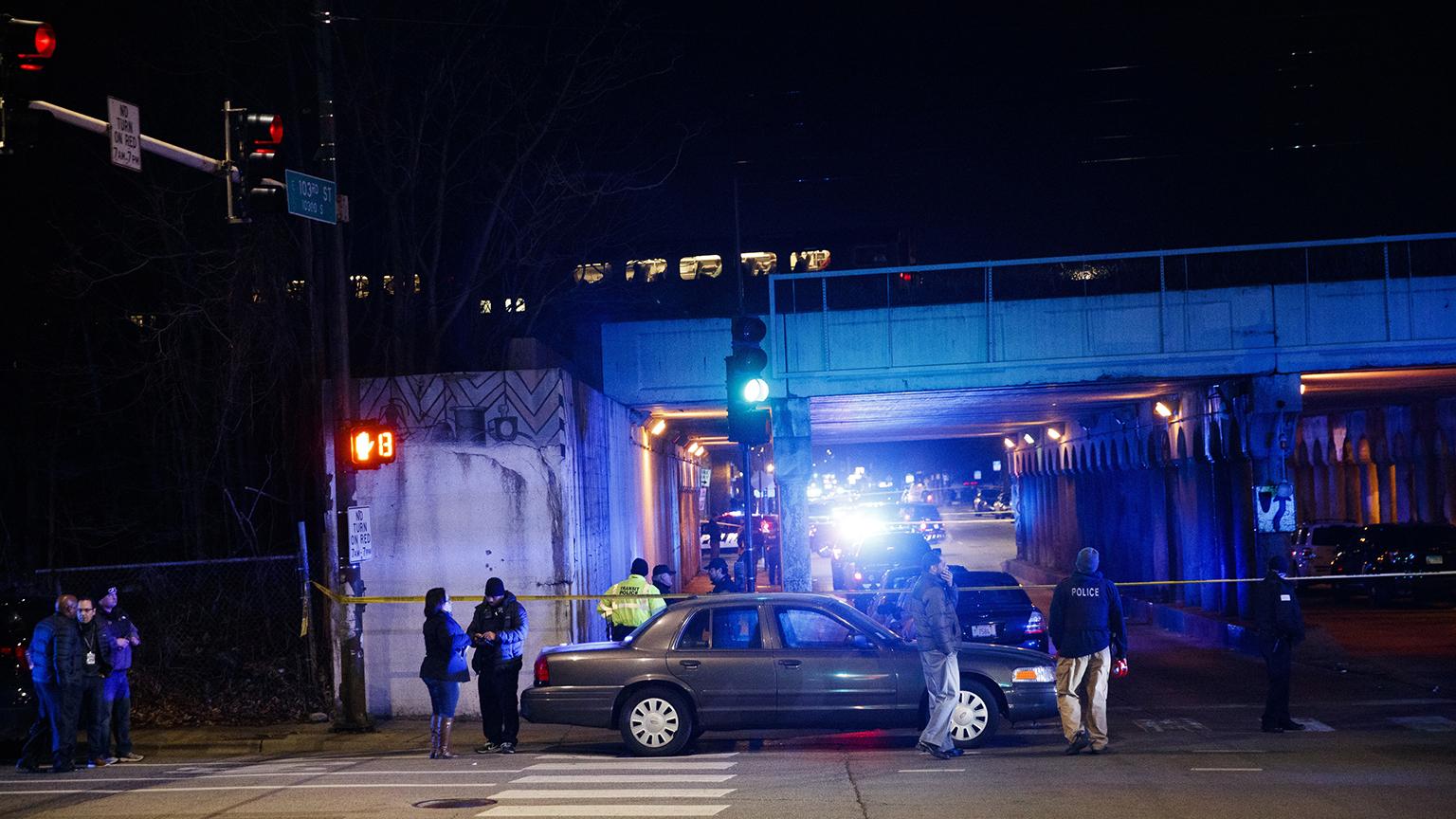 Police investigate the scene where two officers were killed after they were struck by a South Shore train near 103rd Street and Dauphin Avenue on Monday, Dec. 17, 2018. (Armando L. Sanchez / Chicago Tribune via AP)

CHICAGO (AP) — Two Chicago police officers were fatally struck by a train as they investigated a report of gunshots on the city's far South Side.

Eduardo Marmolejo, 37, and Conrad Gary, 31, were pursuing a person heading toward the train tracks when they were hit shortly after 6 p.m. Monday as the commuter train passed through the area, Police Superintendent Eddie Johnson said. Police said the officers were chasing the suspect on foot.

“There was no stop at that location so the train was probably going somewhere between 60 and 70 miles per hour,” Johnson said during a news conference.

Johnson said an individual was taken into custody and a weapon was recovered. He said the investigation was still in the early stages and that more details would be released later.

Marmolejo had been with the department for 2½ years and Gary for 18 months, Johnson said.

“There are no words that can express the grief, the sense of loss. It just knocks you back on your heels,” he said.

Chicago police use ShotSpotter technology, or sensors that monitor for the sound of gunfire and alert police. Johnson said the two officers went to the scene Monday after a ShotSpotter alert went out.

“It just highlights again how dangerous this job can be. I often say that the most dangerous thing a police officer can do is take a weapon off of an armed individual,” Johnson said.

The train that struck the officers was operated by a commuter rail line that links northern Indiana and Chicago, according to media reports.

In 2002, Chicago police officer Benjamin Perez was fatally struck by a commuter train while conducting surveillance on narcotics activity on the city's West Side.

Two other Chicago officers besides Marmolejo and Gary were killed in the line of duty this year.

Officer Samuel Jimenez was killed in a shootout last month after he chased a gunman inside a hospital on Chicago's South Side. The shooter also killed two other people — his ex-fiancee who was an emergency room doctor and a pharmacy resident — before taking his own life.

And in February, Cmdr. Paul Bauer was fatally shot while pursuing a suspect in the Loop business district.

“I think it's really important that we put our arms around the Chicago Police Department and hold them up and support them at this critical juncture, because we are so dependent on their professionalism and their sense of duty,” Emanuel said Monday night.