READ: Slain CPD Officer Was ‘Part of the Fabric’ of Near North Community

An off-duty Chicago Police officer was shot and killed near the Thompson Center on Tuesday afternoon, prompting a shutdown of the building. 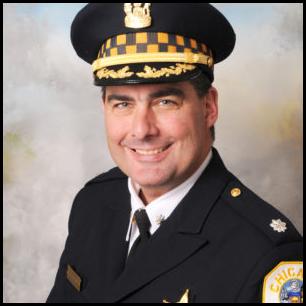 “It’s a difficult day for us, but we will get through it,” an emotional Johnson said Tuesday afternoon outside Northwestern Memorial Hospital. “Again I just ask for the entire city for their thoughts and prayers. Any loss of life in this city is tragic. Today is difficult.”

First district tactical officers were on routine patrol around 1:30 p.m. when they observed a man “acting suspiciously,” Johnson said. When they went to confront him, a physical confrontation ensued and the suspect fled on foot.

Bauer, 53, heard a description of the suspect over the radio and saw the man, engaging in what Johnson called an “armed physical engagement.” Bauer was struck by gunfire multiple times.

18th Dist Cmdr. Paul Bauer - a 31 year veteran of the CPD - was senselessly murdered today while safeguarding Chicago. Cmdr. Bauer was assisting officers in apprehending a suspicious person when he was fatally shot. Person of interest is in custody. pic.twitter.com/lwLGMBY27i

“Commander Bauer stood for the highest ideals of our police department and our city – to serve and protect the people of Chicago,” Mayor Rahm Emanuel said in a statement.

“His death is a tragic reminder of the dangerous duty the men and women of our police department accept to ensure the safety of us all. I ask every Chicagoan to keep Commander Bauer, his family, his friends and the entire Chicago Police Department in their thoughts and prayers during this difficult time.”

The suspect is in custody and the weapon used was recovered, Johnson said.