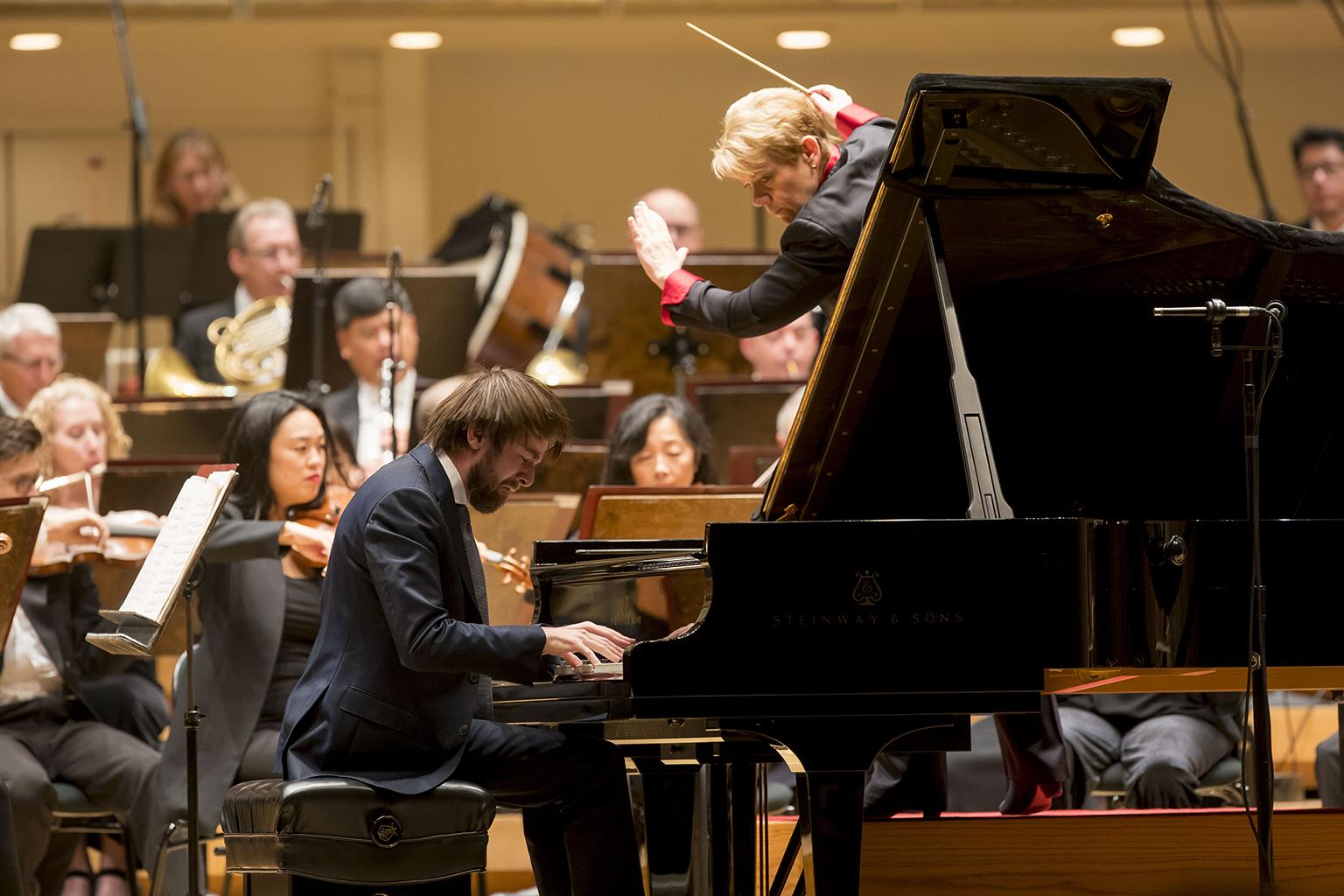 Daniil Trifonov is soloist in Prokofiev’s Piano Concerto No. 3 with guest conductor Marin Alsop and the CSO. (© Todd Rosenberg)

By the time this review is posted you will have just one more chance to catch a concert at Symphony Center that brings you into direct contact with absolute genius. And while that might sound like hyperbole I can assure you it is not. In fact, I advise you to beg, borrow (or maybe even steal) a ticket to hear the Chicago Symphony Orchestra in a program that features the 27-year-old Russian pianist Daniil Trifonov in an electrifying performance of Prokofiev’s demonically difficult Piano Concerto No. 3 in C Major, as well as the haunting, brilliantly realized world premiere of Bruno Mantovani’s “Threnos,” and Aaron Copland’s Symphony No. 3.

I only heard Trifonov play live for the first time last year at Symphony Center and was completely blown away by his astonishing performance of a ferociously difficult solo concert that included works by Schumann, Shostakovich and Stravinsky.

I have not stopped thinking about that performance. And now his breakneck rendering of the Prokofiev – in glorious synchrony with the virtuosic musicians of the CSO and guest conductor Marin Alsop – turns out to be an epic event. In fact, it was easily celebrated as such by the extended standing ovation that brought Trifonov back to the stage for a jewel-like encore performance of J.S. Bach’s Gigue from the “Partita for Violin No. 3 in E Major” (transcribed for piano by Sergei Rachmaninov, a composer whose work he recently recorded).

But before saying anything more about Trifonov there is a great deal to say about Mantovani’s “Threnos,” whose title – the Greek word for “lament” – is just one indication that this stunning, richly orchestrated, 17-minute piece was commissioned by the CSO (with support from the Pritzker Military Foundation) as part of the orchestra’s multifaceted commemoration of the 100th anniversary of the World War I armistice.

I would describe “Threnos” as the haunting aural anatomy of a battle. A friend called it “musical Cubism.” Both are accurate descriptions. 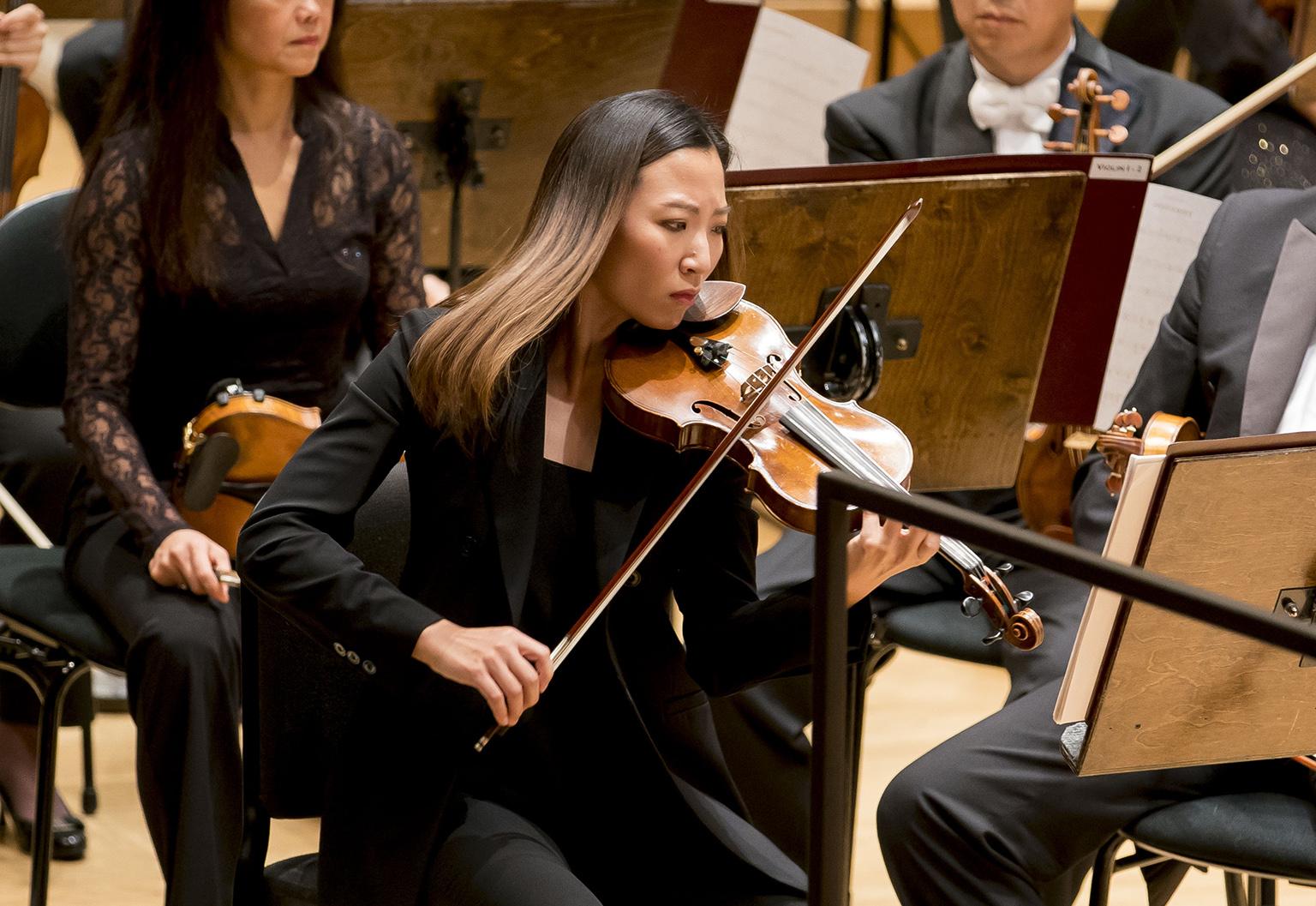 Associate Concertmaster Stephanie Jeong is featured in the world premiere of Bruno Mantovani’s “Threnos” with Marin Alsop and the CSO. (© Todd Rosenberg)

It begins with the faintest, far-off sound of a drum that grows ever louder, closer and more insistent, until the strings and horns join in and build to a cacophonous frenzy. A great buzzing is created, and there is the thunder of timpani along with a sense of all the chaos and calamity that comes with war.

At moments there also are tense lulls, the sound of a flute, and then the nervous, angular hum of a violin (a superb solo turn by Associate Concertmaster Stephanie Jeong). And then, briefly piercing the air, there is the sound of church chimes. The full violin section joins in with frantic bowing to create an eerie, tautly sustained crying effect. A distant horn sounds, and then the beats of the timpani begin to fade to silence.

All in all, this is an emotionally complex, vividly atmospheric, rhythmically evocative work that employs the full range of percussion, and brings to mind the often repeated adage that “War is long periods of boredom punctuated by moments of terror.” Although to be sure, there is not a single boring note to be heard here. “Threnos” deserves to become an instant (and sadly, continually relevant) classic.

Immediately following the debut of “Threnos” it was Trifonov’s turn to “attack” the Prokofiev concerto. And arriving onstage in an almost visibly coiled state, he clearly was ready to pull the pin on a staggering musical grenade.

The explosion that ensued is nearly impossible to describe in words. But to start it must be said that this performance required the intersection of several essential combustible elements.

First, of course, there is Prokofiev, who began writing the work in 1911, when he was barely 20, and finished it a decade later, at which time it had its world premiere by the CSO, with the composer himself as soloist (and with two monumental events – the Russian Revolution and World War I – behind him). A concerto of staggering power and imagination, it also is a potent reminder that Prokofiev, a master of conjuring achingly beautiful melodic lines and highly theatrical dynamics, has few equals among 20th century composers. 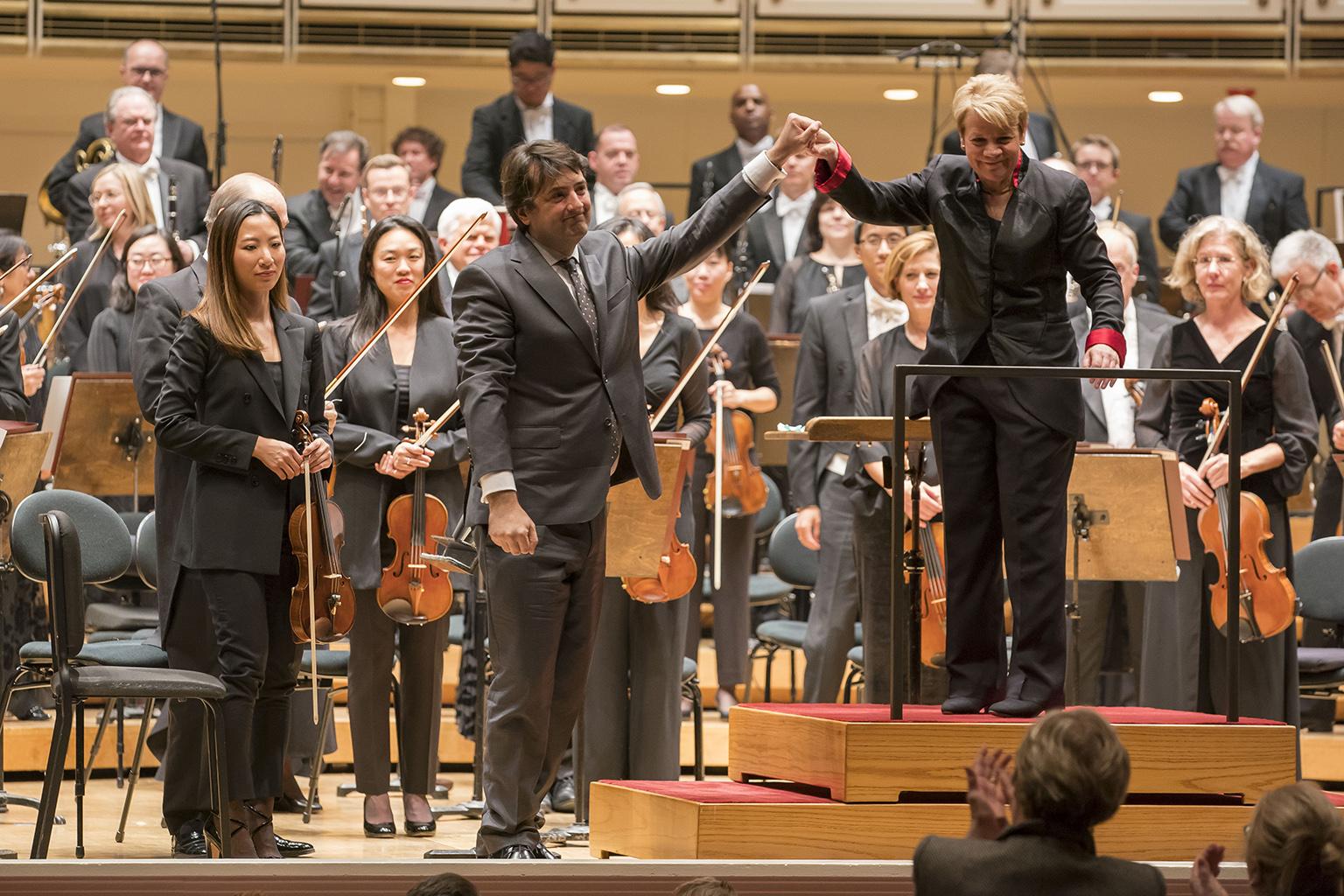 Of course there also is the need for an orchestra of peerless virtuosity and a conductor of immense intensity (cue the CSO and Alsop, who forged a palpable connection with Trifonov throughout). And finally there is the rare soloist whose emotional fire miraculously flows through his body, his brain and his near superhuman fingers, and who is capable of sweeping the keyboard with precision-tooled gale force at one moment, the subtlest, almost jazz-tinged passage at another, and a fierce yet lyrical fury at others. Watch Trifonov’s long, powerful fingers at work and you will see a magical choreography all its own.

There is more to say about every aspect of his performance, but words cannot come close to capturing the experience of listening to it.

The second half of the program begins with English composer Frank Bridge’s very brief, elegiac “Lament” for string orchestra, inspired by the death of more than a thousand passengers on the Lusitania, the great ocean liner sunk when it was hit by German torpedoes in 1915. And then it’s on to Copland’s Symphony No. 3, a work fully in the American grain that was written at the end of World War II and premiered in 1946, just two years after he composed “Appalachian Spring,” his iconic score for choreographer Martha Graham.

At moments throughout the symphony you can hear that wide open prairie sound which is so emblematic of Copland. But along with that spirit of clarity and determined optimism, the sense of forward momentum, and the triumphant sound of trumpets and clashing cymbals there also is a lyrical, aching undertow and dissonance at work.

The moods shift, from jaunty to elegiac, and along the way Copland quotes from his own “Fanfare for the Common Man,” initially written to mark America’s entry into World War II. You hear that now – at such a troubled and troubling moment in our country’s history – and it almost rekindles hope.