Jason Van Dyke took a deep breath and wiped his eyes with a tissue before walking back to his defense table, where he stood alone after spending more than an hour on the witness stand Tuesday afternoon, recounting how and why he killed teen Laquan McDonald.

The suspended Chicago police officer tearfully recalled shooting McDonald 16 times, saying he only decided to start firing once the teen raised his knife over his shoulder, and that he continued firing once McDonald tried to get up off the ground after being mortally wounded.

“We never lost eye contact,” Van Dyke testified about the moments immediately preceding the shooting. “His eyes were bugging out. His face was just expressionless. He turned his torso toward me … he waived a knife from his lower right side upwards across his body toward my left shoulder.”

“And when he did that, what did you do officer,” defense attorney Randy Rueckert asked.

“I shot him.” Van Dyke replied. 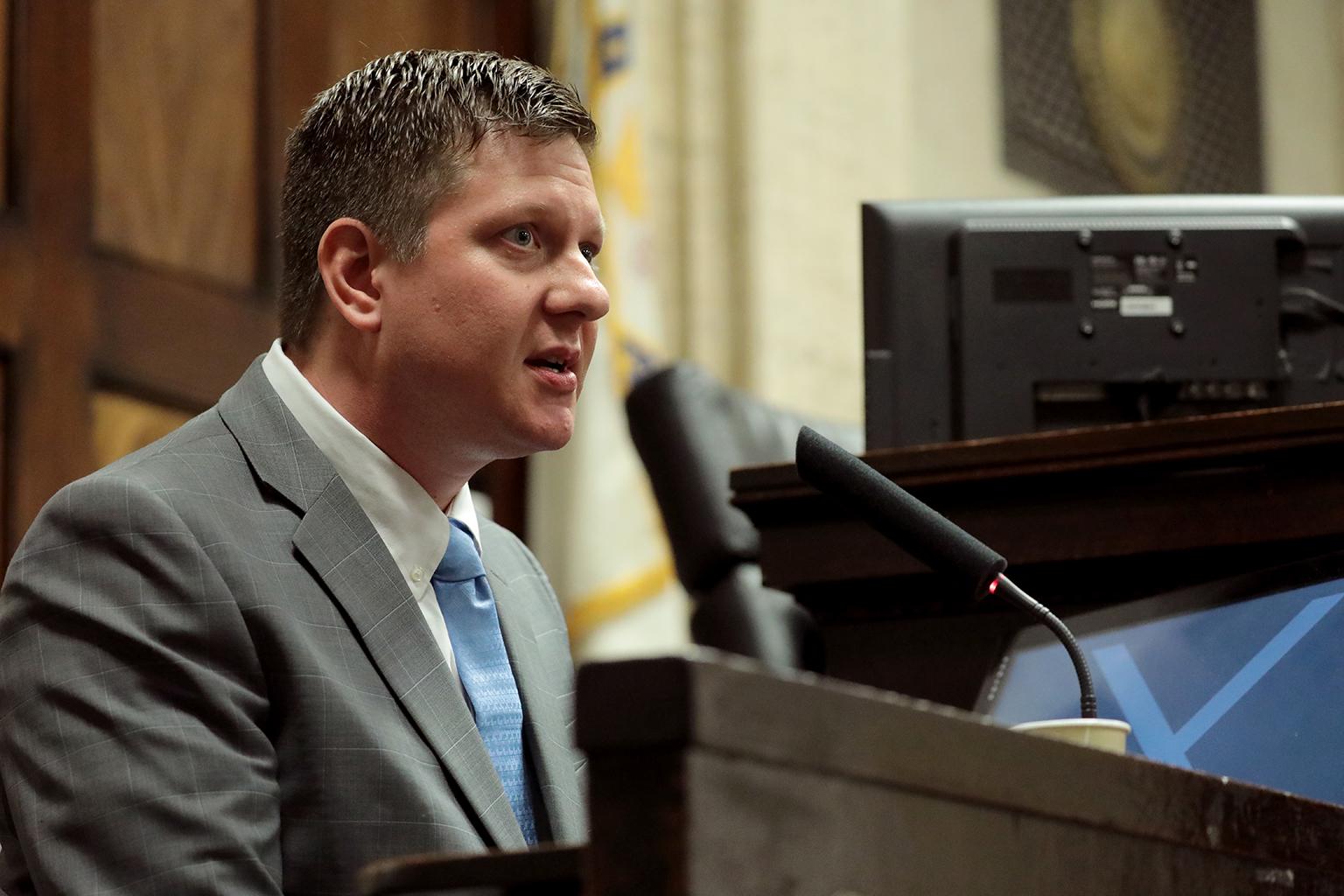 Van Dyke is charged with first-degree murder after shooting McDonald during a police call in October 2014. He also faces 16 counts of aggravated battery and one count of official misconduct.

The defense also called two expert witnesses Tuesday who said Van Dyke was justified in shooting McDonald and acted reasonably in responding to what he believed was a “deadly threat.”

But prosecutors called into question the validity of previous statements the officer made – both on the night of the shooting and to a psychologist who evaluated him in 2016 – and asked Van Dyke to point out on the infamous dashcam video of the shooting where McDonald could be seen raising his knife or attempting to get up after being shot.

He testified that the video didn’t show what he was seeing.

“In that video, it may not show it, but that was not my perspective ma’am,” Van Dyke said. “I was coming in from a completely different angle."

Prosecutors were also able to bring up statements Van Dyke made to defense expert Dr. Laurence Miller during a 2016 evaluation in which the officer said he told his partner, while they were still more than a block from McDonald, “Oh my God, we’re going to have to shoot the guy.”

When asked why he said that, Van Dyke said he believed that officers were under attack, saying “the whole thing was just shocking to me.”

Kevin Graham, president of the Chicago Fraternal Order of Police, believed Van Dyke made the right call to testify, saying he felt the officer gave an “honest, unrehearsed” rendition of what he saw.

McDonald’s great uncle, the Rev. Marvin Hunter – who watched Van Dyke’s testimony with other family members in the courtroom – had a different opinion.

“I’m a man of faith, I believe in mercy, I believe in forgiveness and I pray that mercy will be had in this instance,” he said Tuesday afternoon. “But the reality is that I believe not one word that Jason Van Dyke said today. Not one word.”

The defense is expected to rest its case when court resumes Wednesday morning.

Below, updates from Tuesday’s courtroom proceedings. Get complete coverage of the trial here.

After calling 20 witnesses – including their own client – defense attorneys for Jason Van Dyke will rest their case Wednesday morning.

Judge Vincent Gaughan said the defense will move into evidence the rest of its exhibits, and if prosecutors object, an additional hearing will be held. Otherwise, prosecutors will be allowed to recall their own witnesses in rebuttal to defense testimony, if they so choose.

If no more witnesses are called, jurors will be given instructions and head into their deliberations.

“We’re getting near the end,” Gaughan said. 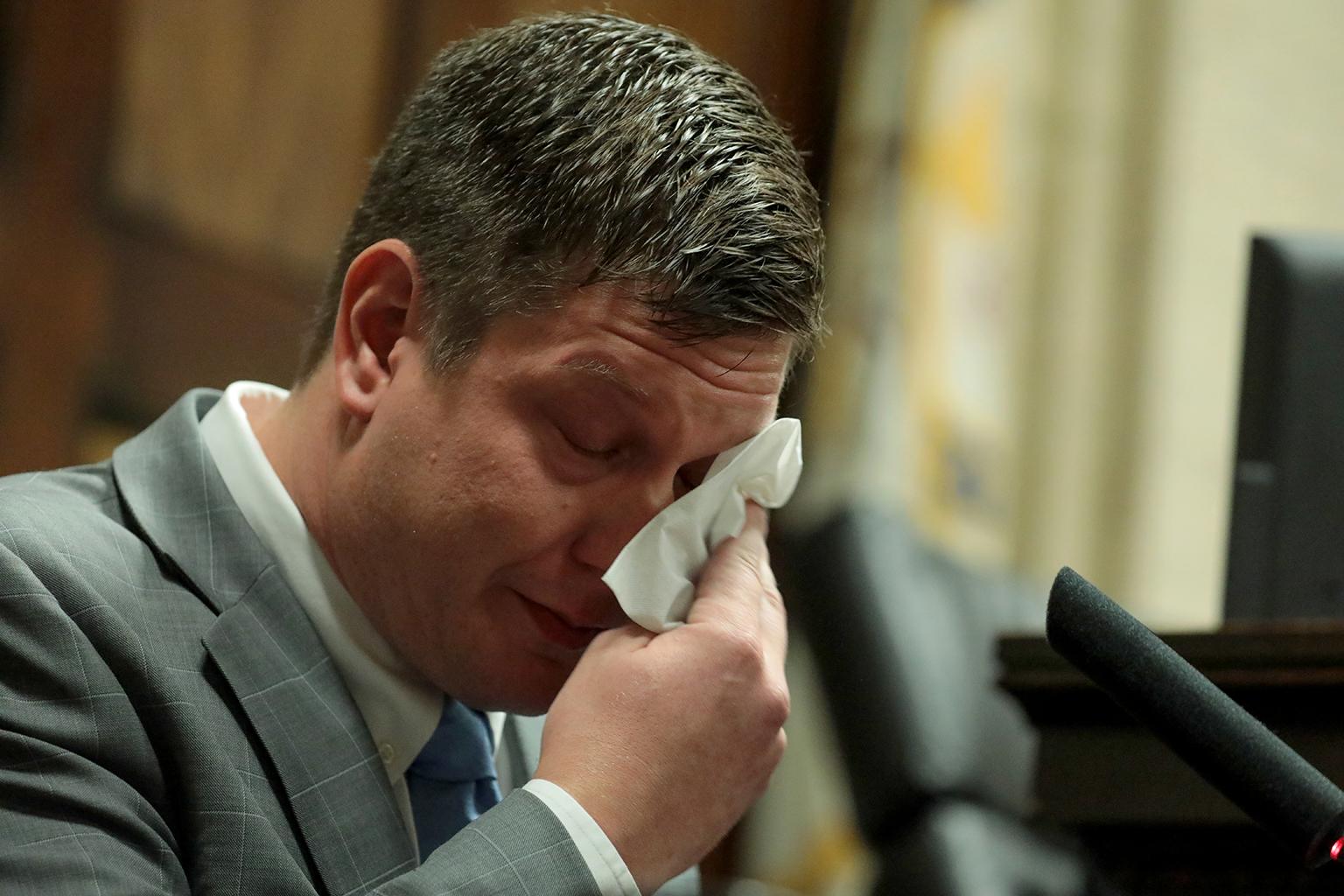 Jason Van Dyke – voice cracking, eyes watering – recalled how he fired a first volley of bullets at Laquan McDonald until the teen fell to the ground, then after pausing briefly, continued firing once McDonald tried to stand up, knife in hand.

But special prosecutor Jody Gleason played dashcam video of the fatal shooting to Van Dyke, attempting to contradict the officer’s testimony at several points, including Van Dyke’s claim that the teen was walking away before he was shot.

“He wasn’t approaching toward the fence,” Van Dyke said, referring to a fence exactly opposite Van Dyke’s position on South Pulaski Road.

Van Dyke repeatedly said he was “in shock” and under “a lot of stress” during and immediately after the shooting. But video evidence contradicted his testimony when Van Dyke claimed that McDonald had raised his knife over his shoulder.

He also said he continued shooting once McDonald was on the ground because he saw the teen attempt to stand up with his knife in hand. When asked where he saw that on the dashcam video, Van Dyke testified that the video didn’t show his perspective.

Interestingly, Van Dyke also testified that a defense-proffered animated recreation of the shooting – which shows the shooting from directly behind Van Dyke – also didn’t show his perspective of events. 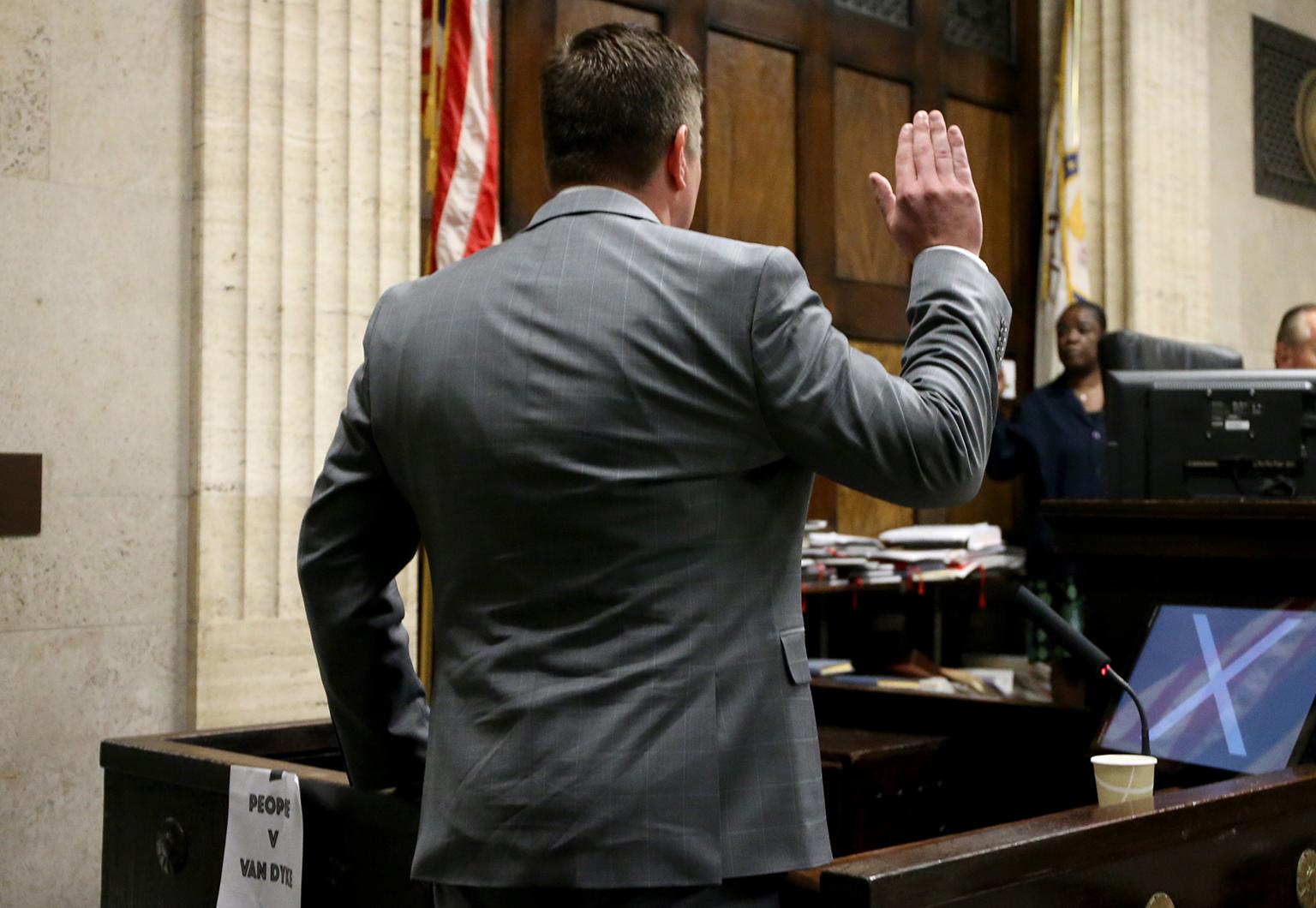 Jason Van Dyke has been called to testify on his own behalf in the shooting death of Laquan McDonald.

Defense attorneys had given no indication about what they planned to do with Van Dyke as a witness leading into the high-profile murder trial.

It’s not uncommon for defendants claiming self-defense to testify. But Van Dyke’s attorneys had attempted to use other means to try and show how the shooting played out from their client’s perspective. They called witnesses who were on the scene and a psychological expert, and created an animated recreation of the shooting itself that purported to show things from Van Dyke’s position.

“Oh my God, we’re going to have to shoot the guy,” Van Dyke told his partner, Joe Walsh, while they were still more than a block away from McDonald on Oct. 20, 2014.

That was one of several statements Van Dyke made to defense expert Dr. Laurence Miller in 2016 during an evaluation.

During cross-examination, assistant special prosecutor Joe Cullen focused in on what Van Dyke was thinking just before the shooting by referencing the officer’s own statements.

He also attempted to impugn Van Dyke’s credibility during that 2016 evaluation, and Miller admitted that sometimes people do lie after the fact to make themselves look better in certain situations.

Van Dyke also told Miller that McDonald had given him a “dead stare” that he described as “looking into the soul of Laquan McDonald.”

"Those were his words," Miller testified.

Still, Miller said he believed Van Dyke was being truthful during their 2016 discussion.

"I believe Jason Van Dyke told me the truth,” Miller said, “as he perceived that truth.” 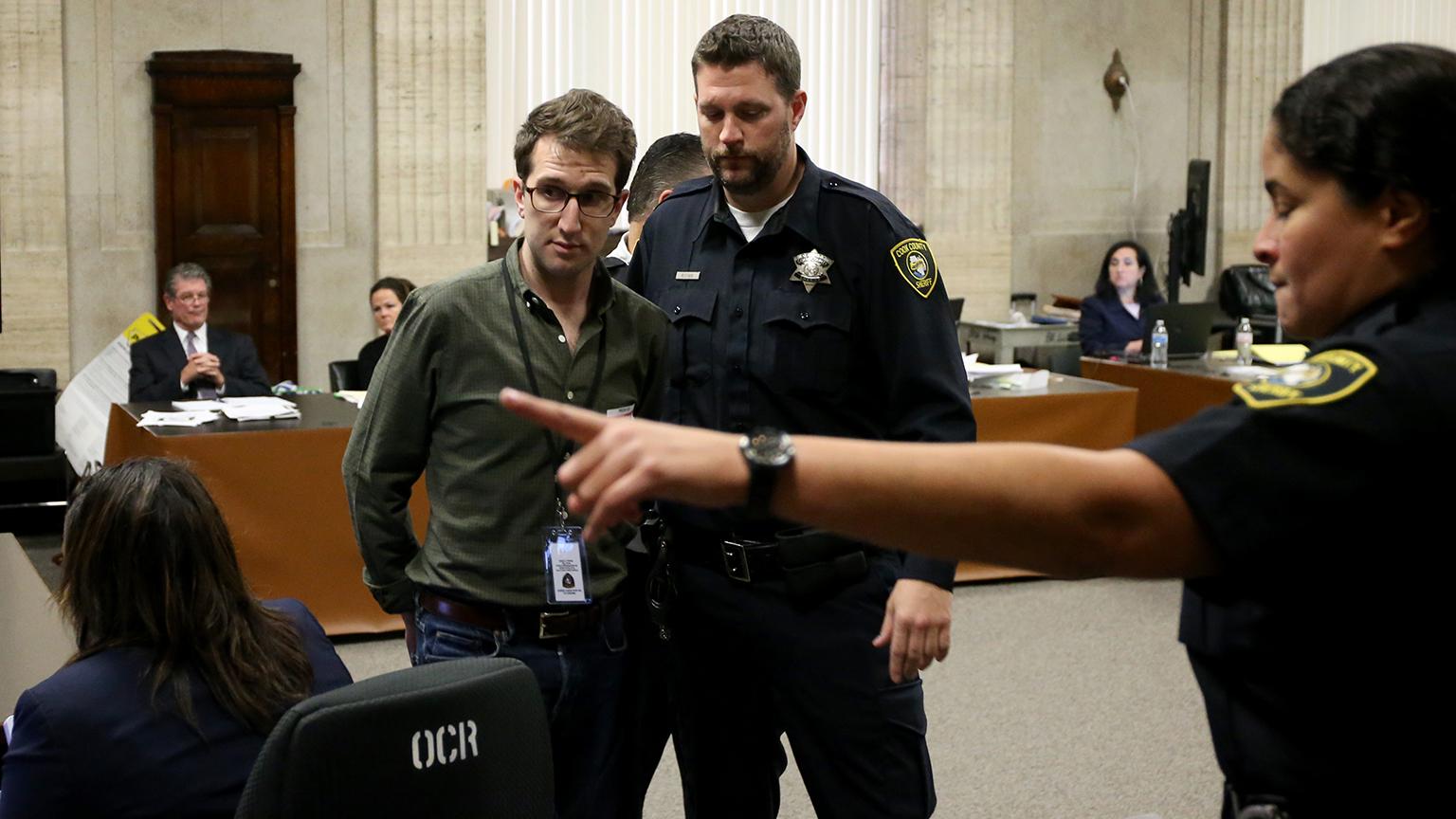 The jury was abruptly removed from the courtroom while prosecutors cross-examined Miller because reporter Zachary Siegel had been using a recording device inside the courtroom.

Any recording outside of pool audio and video is explicitly banned under Judge Vincent Gaughan’s decorum order. Siegel was brought before Gaughan and initially stated he had not heard the decorum order read in court.

Siegel then admitted he had heard the order when Gaughan called up the reporter sitting next to him and asked the reporter whether Siegel was in court when the decorum order was read.

Siegel was taken into custody and held on direct contempt.

After discussing what police officers experience during and after potentially deadly situations, Miller said he believes Van Dyke acted appropriately in shooting McDonald.

“My opinion is that on Oct. 20, 2014, Officer Jason Van Dyke responded to what he perceived was a deadly threat,” the psychologist testified, adding that he believes Van Dyke acted reasonably based on his training as an officer.

Immediately after Miller gave his opinion on the case, Gaughan called for a short recess. Prosecutors will begin cross-examining Miller once the trial resumes. 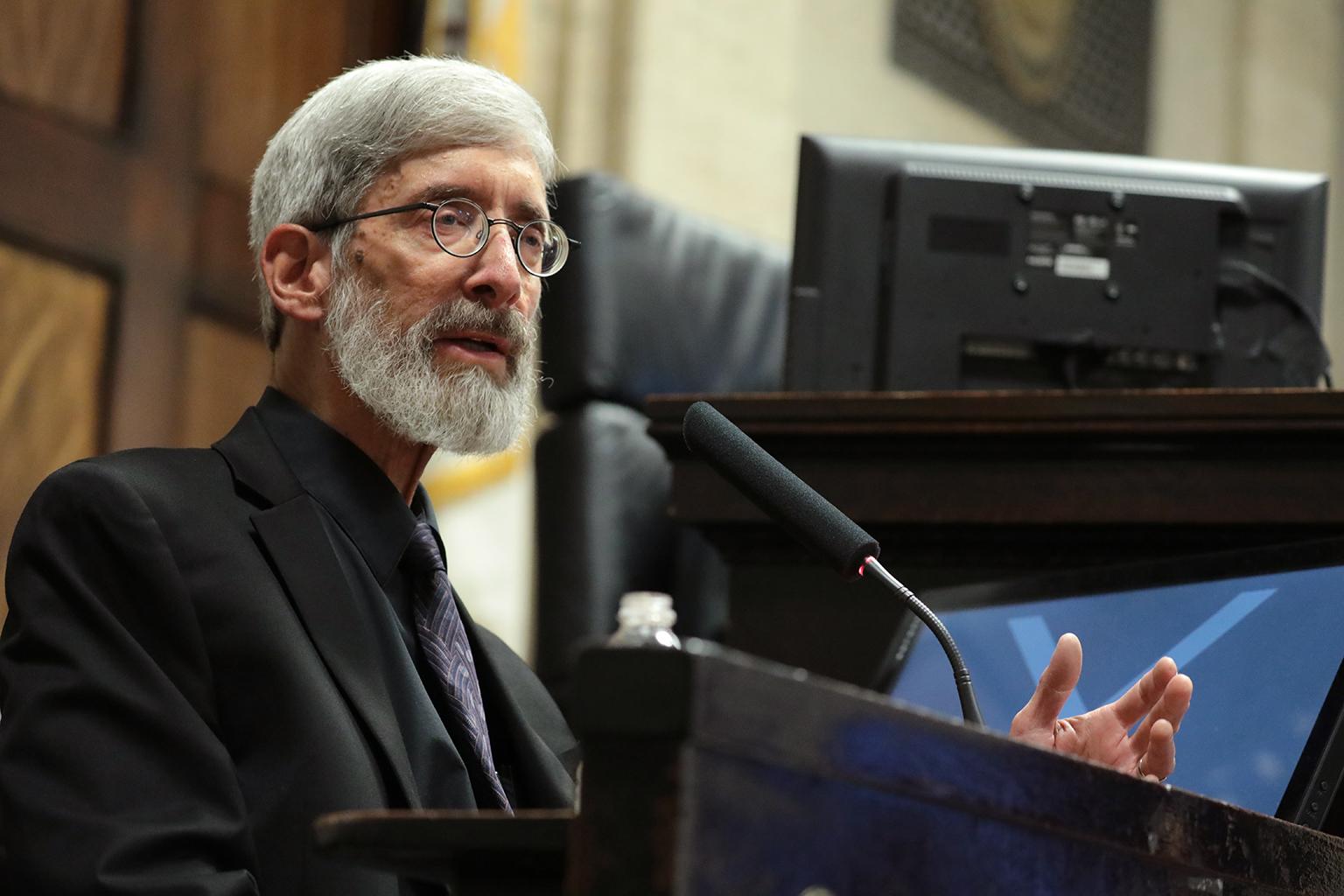 Dr. Laurence Miller, a Florida-based clinical psychologist focusing on police psychology, took the stand as one of the defense’s final witnesses to testify about how officers experience high-stress situations.

Miller evaluated Van Dyke in 2016 and is testifying about what he believes went through the officer’s brain when he shot McDonald. He began his testimony by giving jurors an extensive science lesson on brain anatomy and functions to explain how human beings typically feel and react during emergency situations.

“All of these systems are operating in tandem,” Miller told jurors as they viewed several animated diagrams of the human brain. “They are coordinated in a millisecond-to-millisecond basis.”

That, he testified, was done to lay the groundwork to show what goes through a person’s head during a situation involving deadly force. Miller said officers in these fight-or-flight situations would experience perceptual distortions, like time compression, tunnel vision and hearing, and a sense that actions are passing in slow motion.

Some also feel cognitive and emotional distortions, describing these situations as an out-of-body experience and have difficulty remembering exactly what happened.