Jason Van Dyke is the one facing murder charges, but his attorneys on Monday painted teen Laquan McDonald as a violent drug user who became aggressive when under the influence of PCP.

Van Dyke’s defense team began presenting its case as the second week in the high-profile murder trial got underway. Van Dyke is charged with first-degree murder after shooting McDonald 16 times during a police call in October 2014. He also faces 16 counts of aggravated battery and one count of official misconduct.

The defense called three current or former employees of the Cook County Juvenile Temporary Detention Center to testify about separate issues they had with McDonald during his various stays there.

Joseph Plaud, a Cook County Sheriff’s deputy working in the juvenile division, told jurors about a violent interaction he and his partner had with a 15-year-old McDonald.

Plaud’s partner struck McDonald in the stomach because, as Plaud testified, the teen raised his arm toward them in a threatening manner. Miguel DeJesus, a guard at the juvenile detention facility, also recalled McDonald striking him during an incident in January 2014.

DeJesus said McDonald admitted being “on the leaf,” which he said was slang for using PCP – a hallucinogenic drug that was also in the teen’s system the night he was shot and killed.

Even though Van Dyke was not aware of these incidents the night of the shooting, Plaud and DeJesus are allowed to testify about their experiences as Lynch witnesses.

Under Illinois law in criminal cases where a defendant claims self-defense, they may introduce evidence about the victim’s criminal past, even if the defendant wasn’t aware of that past at the time of the incident.

Cook County Judge Vincent Gaughan has granted the defense permission to call at least a half-dozen Lynch witnesses at trial. This line of testimony will likely continue later this week. 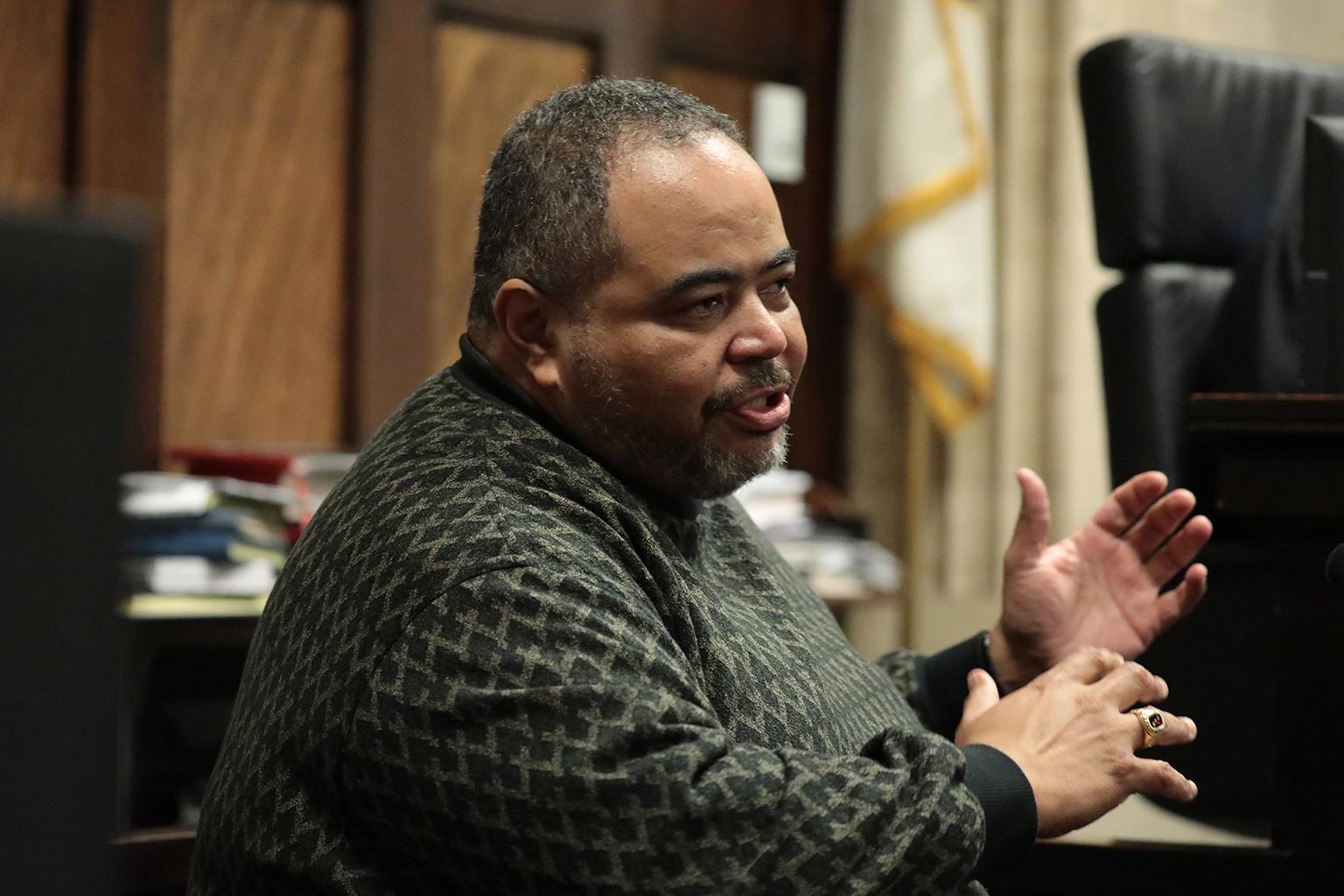 Joseph Plaud, a Cook County Sheriff’s deputy working in the juvenile division, told jurors about a violent interaction he and his partner had with a 15-year-old McDonald at the county’s juvenile detention center.

Plaud said McDonald began swearing at another juvenile and resisted when Plaud and his partner went to remove him from the area.

“‘This might be a problem. We might have to move him,’” Plaud said he told his partner. “Laquan got like agitated and pulled his arm back. … So my partner hit him in the stomach.”

Other juvenile detention center employees testified about their experiences with McDonald, including Tyler Sage, who recalled an incident in which McDonald was restrained after he wrapped his arms around a guard.

During brief cross examination, prosecutors established that Van Dyke was not aware of any of these incidents when he shot McDonald.

These men represent the defense’s first Lynch witnesses – those who can offer evidence of McDonald’s alleged prior bad acts or criminal conduct – to testify at trial. 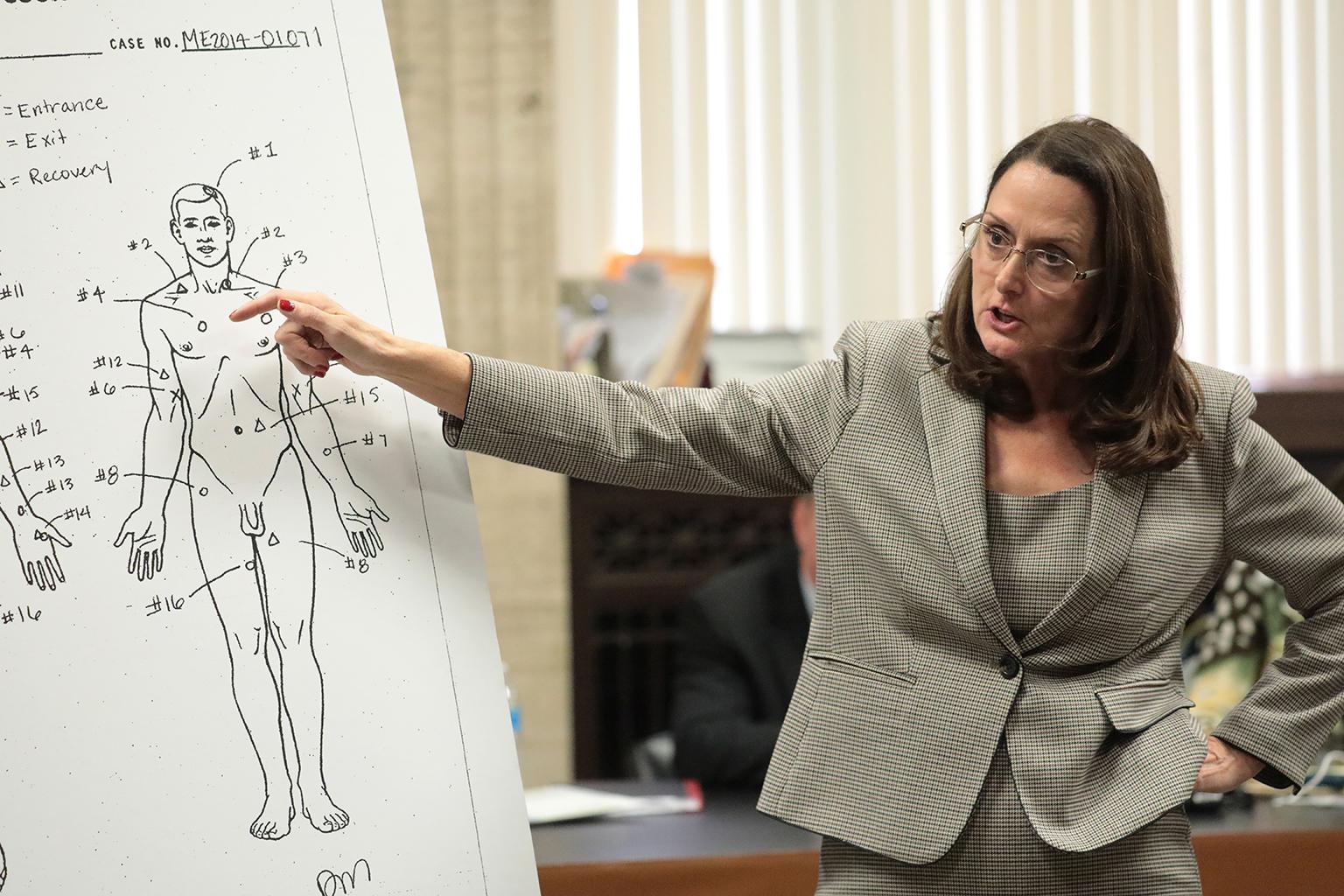 “I won’t say anything didn’t matter,” Teas said, adding she believed the shot to McDonald’s chest caused his death.

Gleason pushed back on the notion that McDonald was standing when he was struck by the majority of the bullets that hit him. She asked Teas whether each of the 16 shots caused an injury to McDonald.

“Yes,” Teas responded each time when asked about each individual shot.

Paramedics who worked on McDonald after he was shot testified last week that McDonald still had a weak pulse when they loaded him into an ambulance at the scene of the shooting.

But Teas contends that McDonald could have died within as little as a minute or two after the shooting, saying a person can register a heartbeat or a pulse even after they have died. 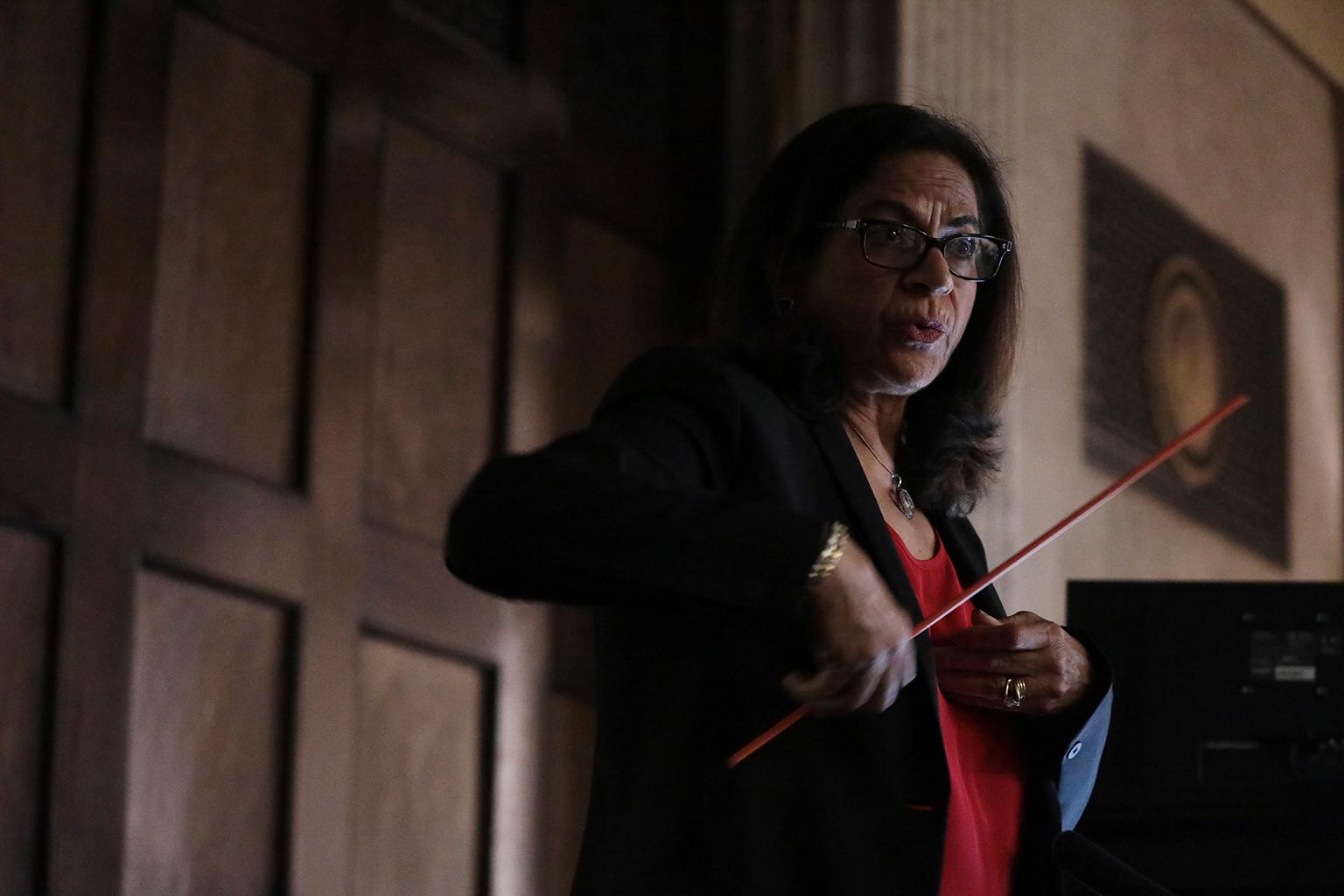 Teas repeatedly stood up from her seat on the witness stand to demonstrate to jurors how she believe McDonald was standing when various shots struck him.

Teas, who reviewed the teen’s autopsy report, testified that McDonald was likely standing when he was struck by more than 10 of the 16 shots fired at him. She described several of these wounds as “superficial,” saying they wouldn’t have caused any significant blood loss that would’ve contributed to McDonald’s death

“He died before those other wounds even had a chance to bleed?” defense attorney Tammy Wendt asked.

“Probably,” Teas replied. “What I’m saying is he didn’t have effective circulation.”

Teas believes one shot in particular, a gunshot wound to McDonald’s right chest, caused him to die rapidly. She testified that McDonald was likely standing and facing Van Dyke when he sustained this wound.

Despite ruling McDonald’s death was caused by “multiple gunshot wounds,” Teas said it’s possible that only one shot actually caused the teen to die.

Cook County Chief Medical Examiner Dr. Ponni Arunkumar testified that each one of those wounds contributed to McDonald’s death.

But Teas contested that finding. She testified that a gunshot wound to the teen’s head – a graze wound on the top of McDonald’s skull – did not play a role in his death.

Neither Teas nor Arunkumar actually conducted McDonald’s autopsy. Both reviewed the autopsy report and photographs before testifying.