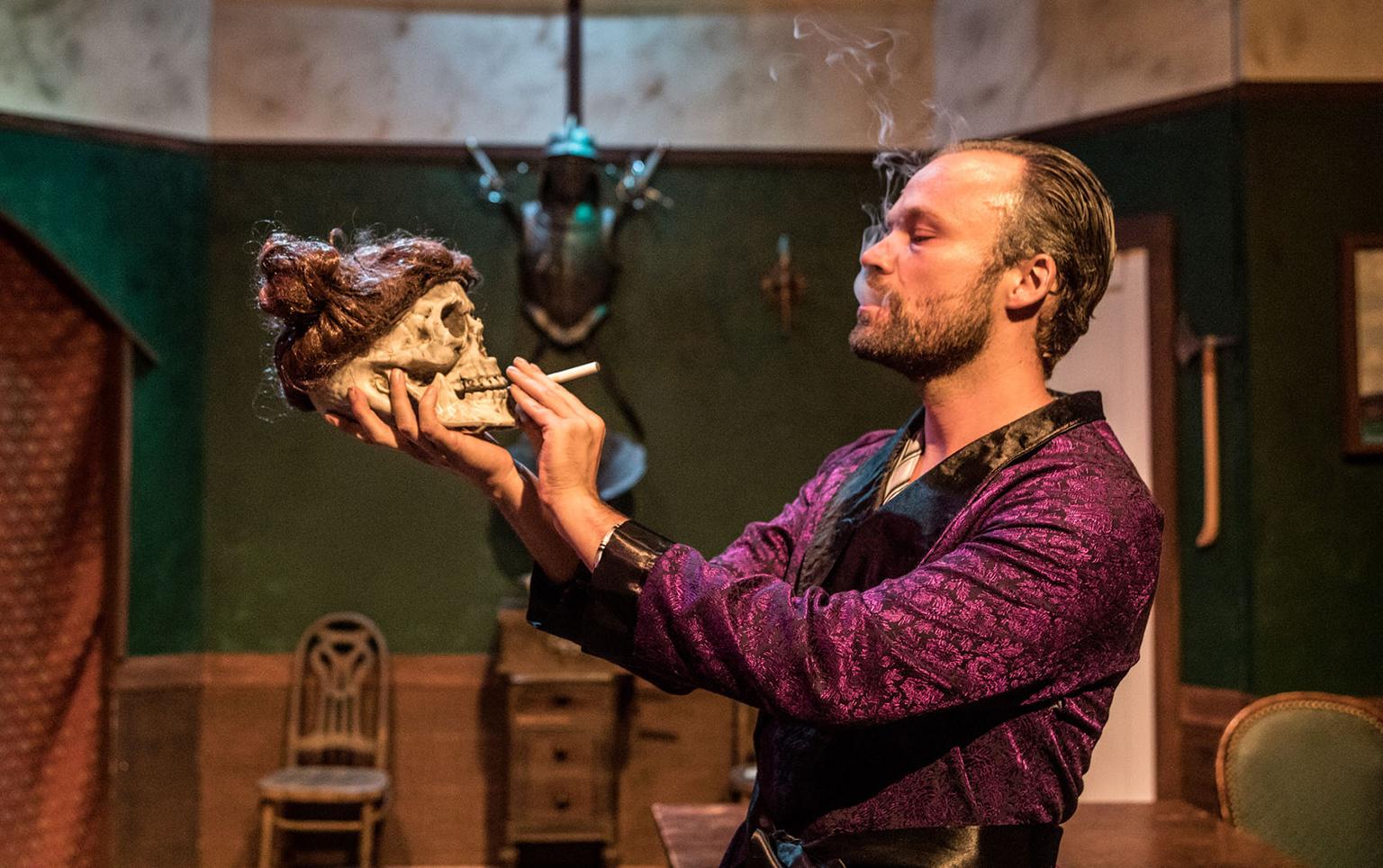 One thing you realize from the very start of Black Button Eyes Productions’ newest work, “Nightmares and Nightcaps: The Stories of John Collier,” is that its narrator – a dissipated, devilishly twisted writer referred to only as The Dweller (and very likely a self-mocking alter ego of Collier himself) – is not going to sugarcoat things. The man has a highly developed sense of the more demonic aspects of human nature and is quite ready to provide evidence of them all with a mix of lip-smacking delight and playful horror.

The Dweller confesses his own depravities, eccentricities, terrors and isolation (self-imposed, yet not entirely desired), and proceeds to spin blackly comic stories about characters undone by love and marriage, by their obsession with money and by their soul-destroying careerism, plus one in which a father’s cruelty to his son knows no bounds. A definite streak of misogyny runs through many of these tales. So does a sense of fear and cynicism somewhat in the manner of Edgar Allan Poe and Roald Dahl. Collier’s work is ideal material for Black Button Eyes, a company that in such shows as “Shockheaded Peter” and “Nevermore,” demonstrated its ability to delve into the macabre with singular style and a good smattering of campiness.

The British born Collier (1901-1980), with whom I was unfamiliar with until seeing this production, began his career as a poet, but became most widely known for his short stories (many published in The New Yorker magazine from the 1930s to the 1950s, and several adapted into episodes for TV’s “The Twilight Zone” and “Alfred Hitchcock Presents”). He also penned a number of screenplays for Hollywood films. 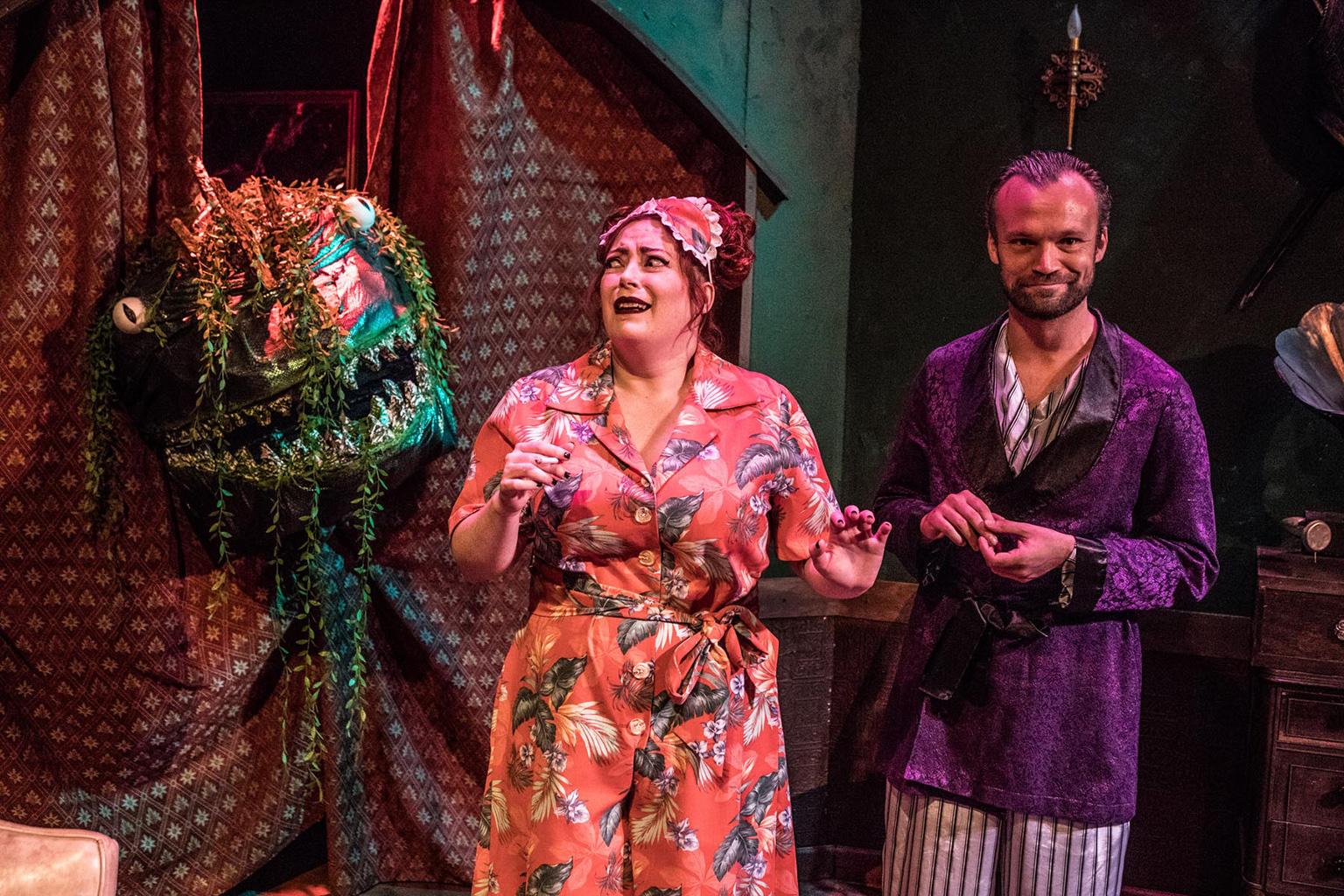 Caitlin Jackson and Kevin Webb in “Nightmares and Nightcaps: The Stories of John Collier.” (Photo by Cole Simon)

“Nightmares and Nightcaps” – deftly adapted and directed by Ed Rutherford – begins as The Dweller (played with immense panache by Kevin Webb), awakes with a start in his city apartment where he carefully locks his door and draws his curtains. Dressed in a purple smoking jacket, and clearly a serious drinker, he talks about his passion for books. And at turns droll, dyspeptic, cynical and unabashedly neurotic, he summons a series of stories that unspool in quick succession.

Joshua Servantez and Maiko Terazawa play a couple of newlyweds who appear to be so madly in love they cannot bear the thought of one of them dying and leaving the other in misery and penury. So they agree to put all their earnings into life insurance policies while scrimping and saving on everything until their life together becomes a misery, and the possibility of cashing in on a policy becomes increasingly appealing.

Another marriage is undone by money as well as obviously mismatched personalities. When Mr. Beasley (Shane Roberie) comes into an unexpected windfall, he decides to live out his dream of traveling the world and experiencing great adventures, while his shrewish wife, Mrs. Beasley (Caitlin Jackson) just wants to stay put and buy a grand home in Jacksonville. Although she tags along with her husband, she makes every step a misery for him until fate intervenes. 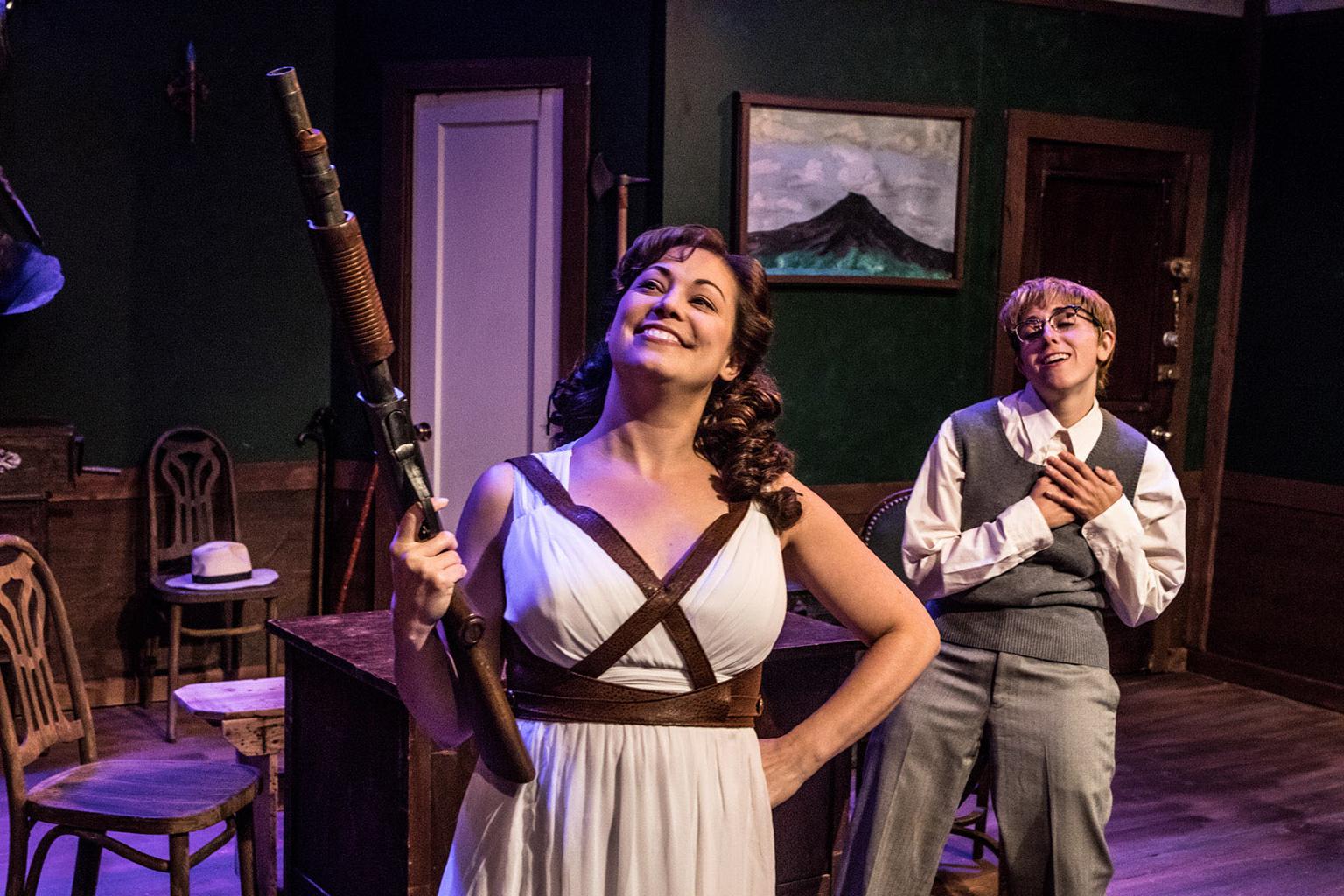 Megan DeLay and Ellen DeSitter in “Nightmares and Nightcaps: The Stories of John Collier.” (Photo by Cole Simon)

And then there is the unrequited love of a young man (played as “a pants role” by the fleet, deftly comic Ellen DeSitter), who is so enthralled by a commanding socialite and big game huntress (Megan DeLay), that he tries to win her affection by pretending she has been turned into a stuffed squirrel by the woman’s taxidermist.

A far darker quest for love unspools as a boy, Small Simon (DeLay), tries to counter his horribly abusive father, Big Simon (Lee Wichman), by talking of an imaginary protector. Most telling of all is that the boy’s mother fails to step in and protect her child.

The most familiar story line here is about a screenwriter who agrees to a Faustian bargain (a truly hellish contract) offered to him by a Hollywood producer. A deceptively shrewd young starlet (Kat Evans) serves as a distraction. 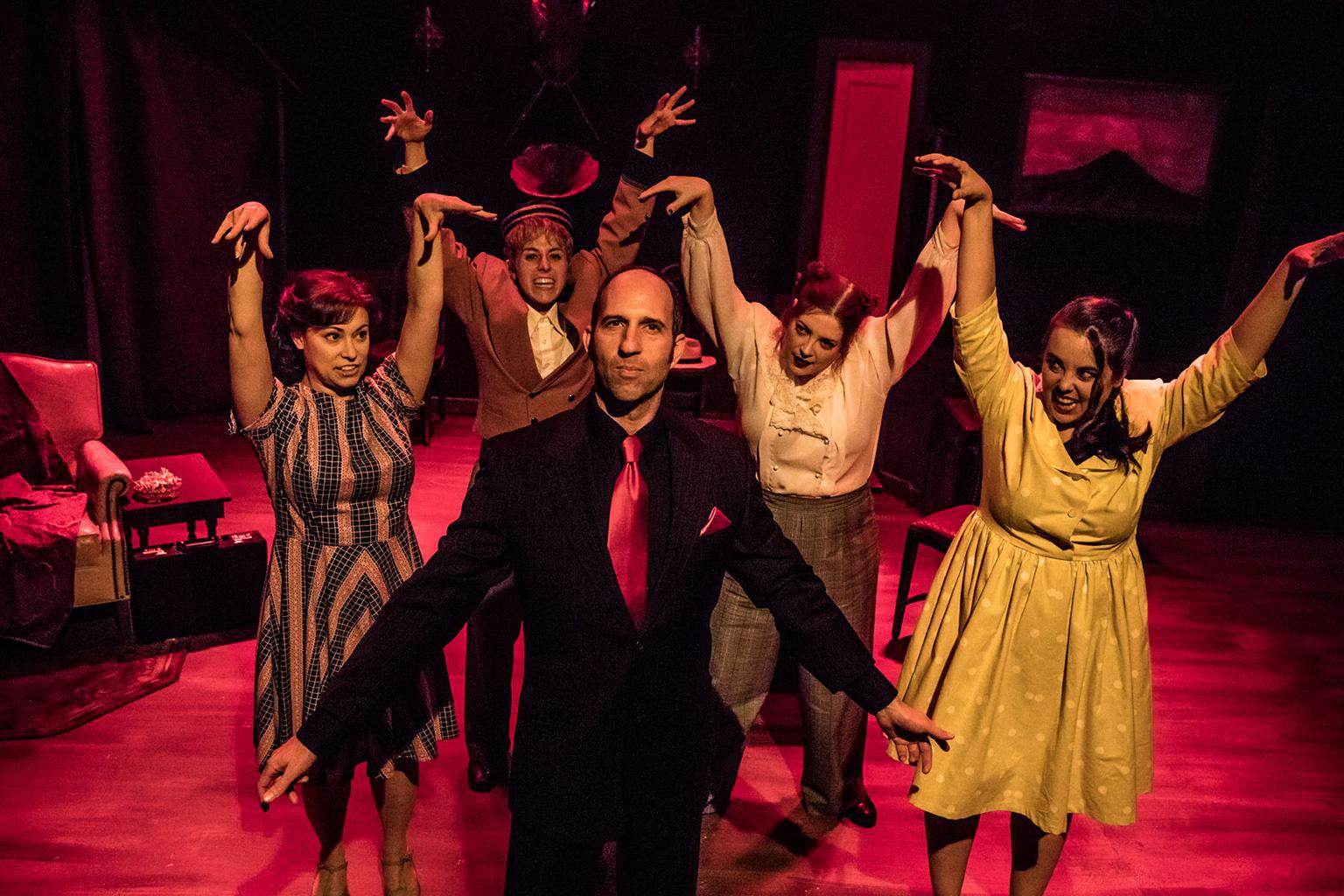 As for The Dweller, he is caught up with the most elusive of “love objects” – the wet footprint of a woman that he finds on the floor, and picks up and wraps in a handkerchief. Not surprisingly, his ideal woman never materializes. (It might be worth noting that Collier was married three times, and that at one point in this show we are advised that a love potion can be bought for far less money than poison. Interpret that as you will.) 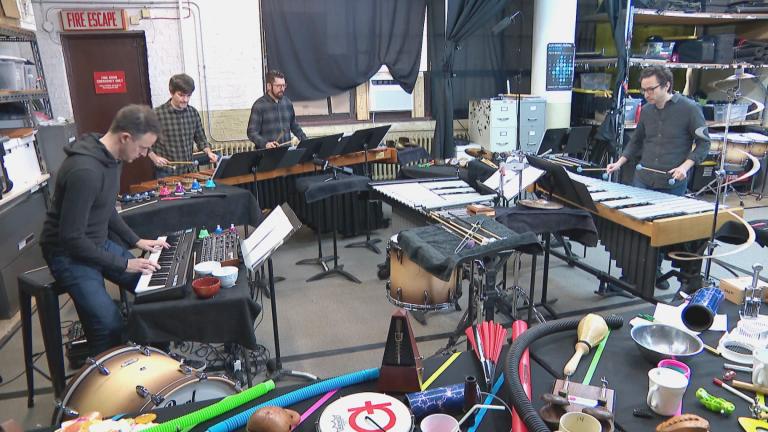