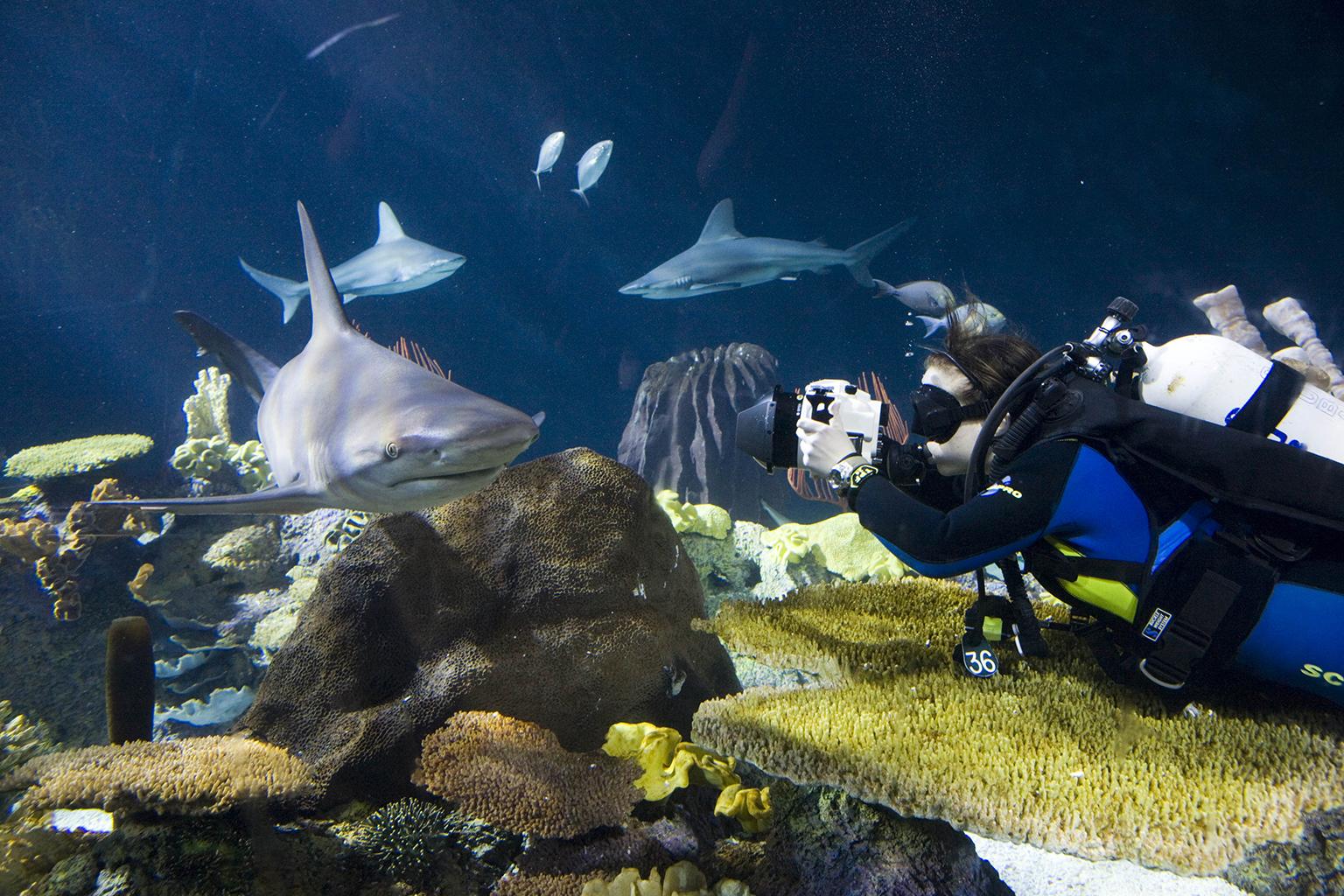 Over the past 12 years, Brenna Hernandez has served as Shedd Aquarium’s only full-time photographer, capturing the institution’s 32,000 animals from both in and out of the water. She has also traveled the globe with Shedd’s animal rescue and exploration teams, snapping hundreds of thousands (if not millions) of photos of all kinds of marine wildlife.

But the path to her action-packed job was not always easy.

Like many early career photographers, Hernandez took whatever work she could find when she moved to Chicago in her early 20s and began freelancing.

She assisted all kinds of photographers – editorial, food, portrait – and shot a lot of events. “I did a ton of weddings,” she said.

She also answered a lot of phones – and not because she wasn’t a skilled photographer.

“Especially back then, they would have the guy assistants do all the work,” said Hernandez, now 39. “They were the only ones who could carry stuff and work on the equipment. So I would take care of clients a lot. Sometimes I was cleaning. Answering doors, answering phones.”

Hernandez had been drawn to the arts from a young age. In middle school, she began taking one-on-one classes with a respected painter in her hometown of Marquette, Michigan, on the state’s scenic Upper Peninsula. 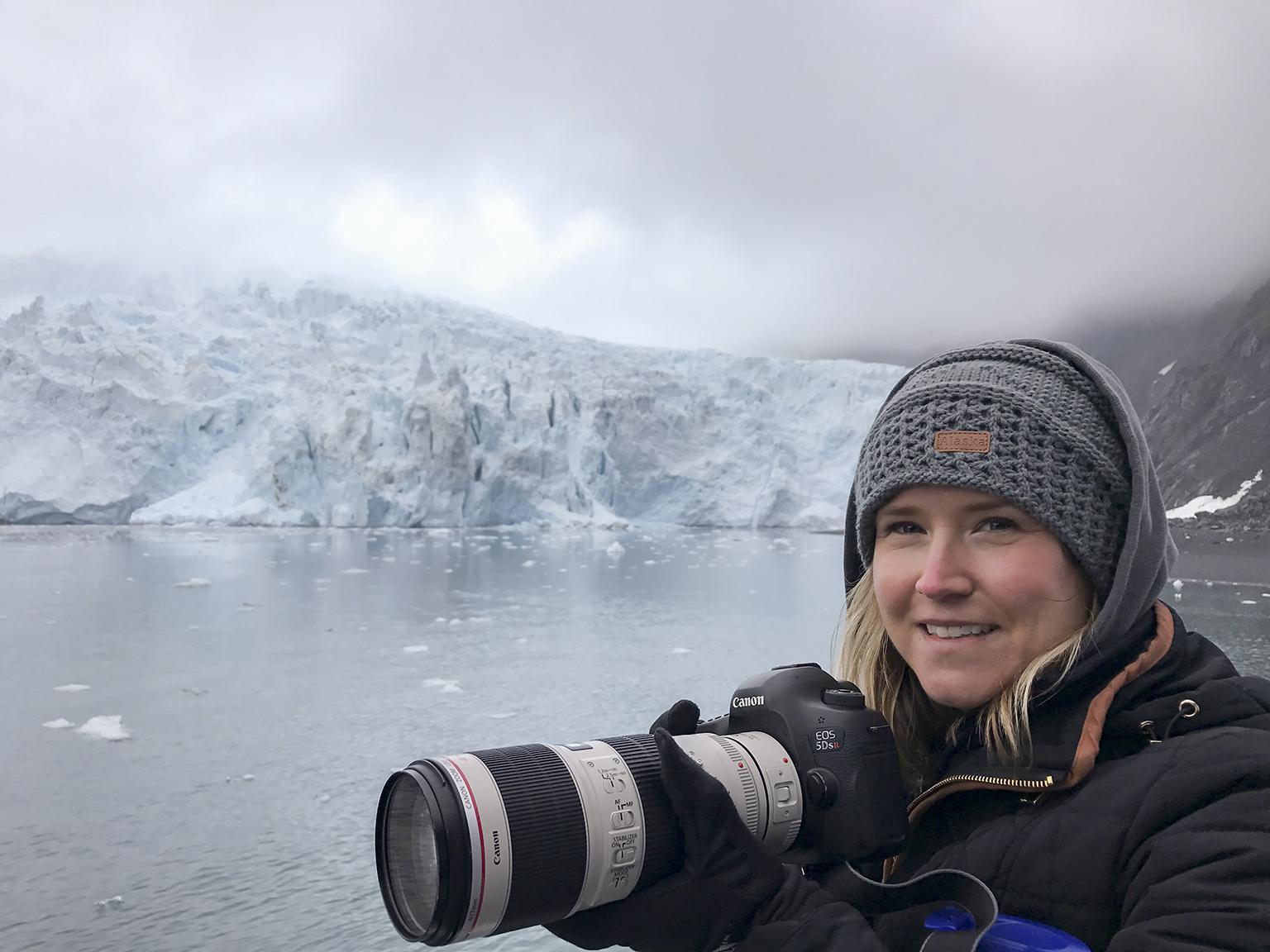 She then started training with a well-known photographer in Marquette who liked to hand-color black and white photos. The woman taught Hernandez about light exposure and helped her select her first camera.

When she moved to Chicago in 2002, she came with degrees in visual arts from Interlochen Arts Academy in Michigan and fine art photography from the highly regarded Rochester Institute of Technology in New York.

Despite her credentials, she ran into roadblocks with some of the photographers for whom she worked, the majority of them men.

“I remember this one photographer – who I’m still friends with today – at one point after a couple of years working with him on and off, he said to me one day, ‘Brenna, when are you going to figure it out? What are you going to do?’

“What do you mean, what am I going to do?” she remembers saying.

“Are you going to be a makeup artist or a stylist?” he asked.

“And I’m like, ‘Um, no, I went to school for photography. I want to be a photographer,’” she said. “I’ll never forget that comment from him.” 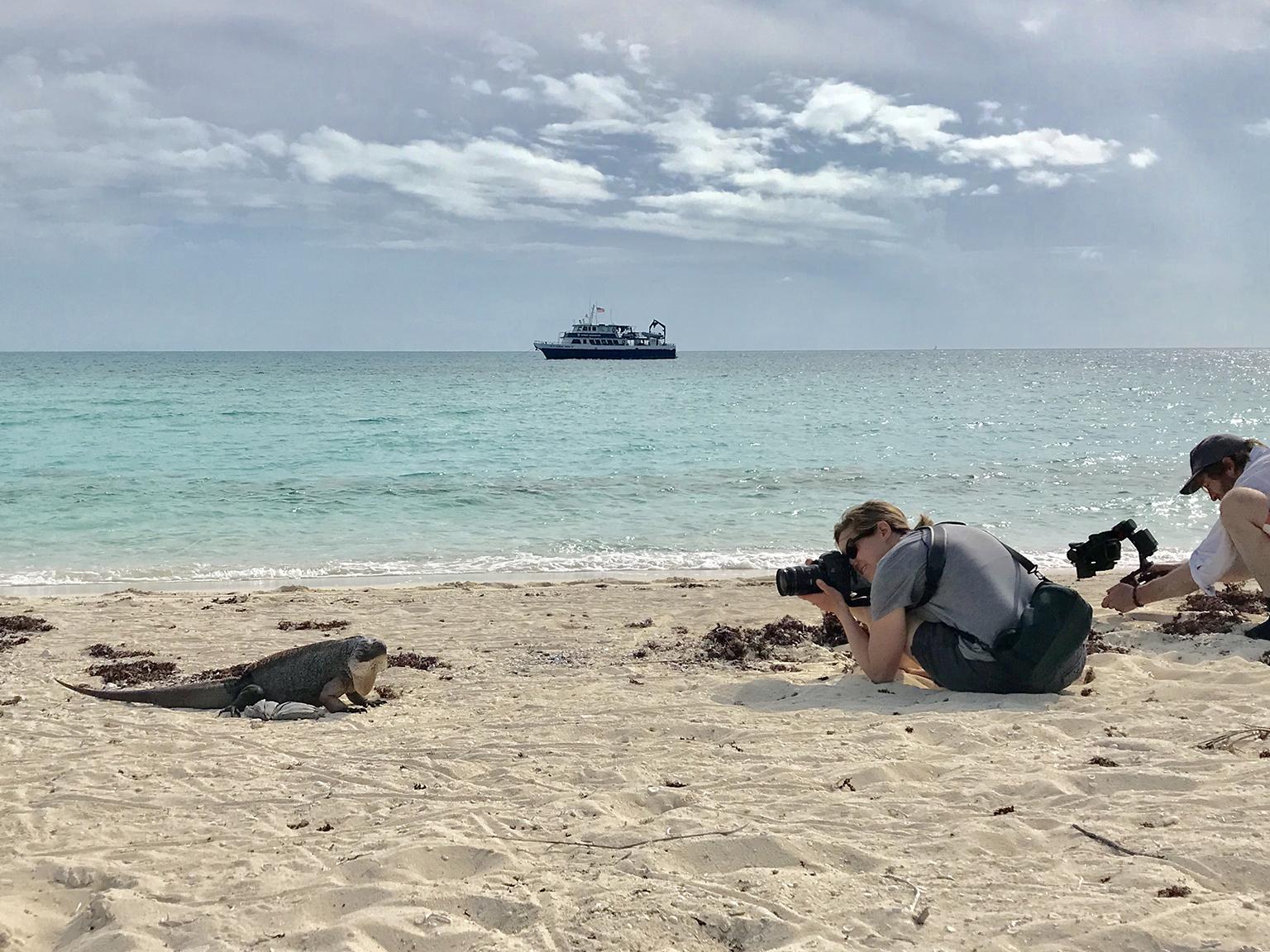 After seeing an ad for her current job on Craigslist in 2005, Hernandez rented a bunch of extra lenses and equipment and spent three full days at the aquarium, paying for her own admission so that she could take photos for her application.

She also bought Shedd’s 75th anniversary book from the gift shop and read it front to back.

“I really wanted this job,” she said. “Not many people had fish photos to show, so when they got all the applications, I was the only one who actually had some kind of aquatic stuff.”

Hernandez’s first day on the job was in February 2006. One of her first requirements was to learn how to scuba dive and earn her certification.

Within months, she found herself diving among sharks off the Bahamas. 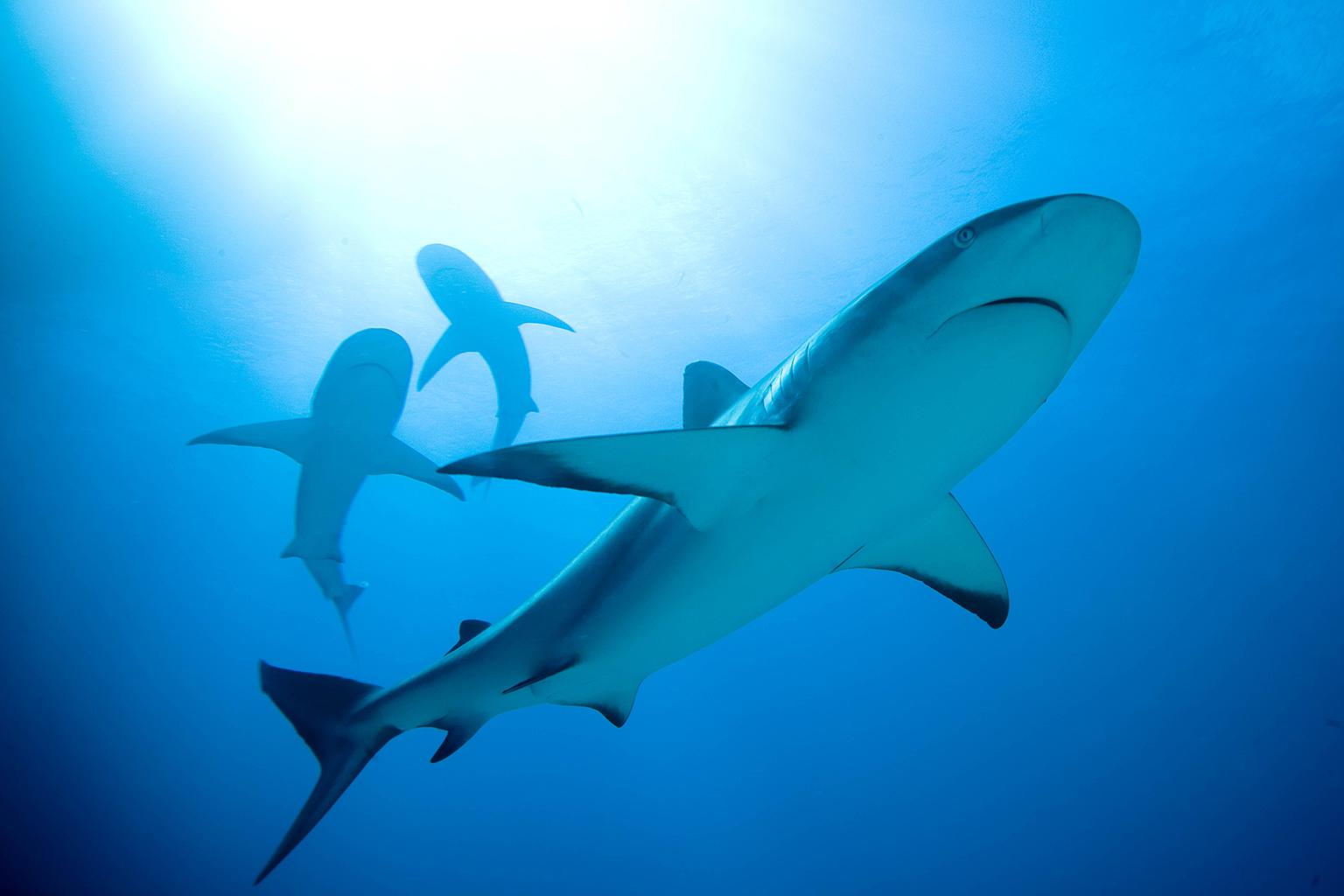 “My heart was like, ‘Oh my gosh,’” she said. “But it was the coolest – it was so awesome. And I felt very safe because I was with our divemaster and [had] really seasoned divers right next to me.

“And the sharks, they were well fed,” she continued. “They weren’t interested. People think they just want to attack us. But that’s not [true].”

Sam Cejtin, who works alongside Hernandez as Shedd’s videographer, said she has a knack for “capturing the intimacy between the caregivers and the animals.”

“Shedd’s animal care [program], that’s paramount here,” Cejtin said, “and I feel like she’s really been able to reflect that in her work.” 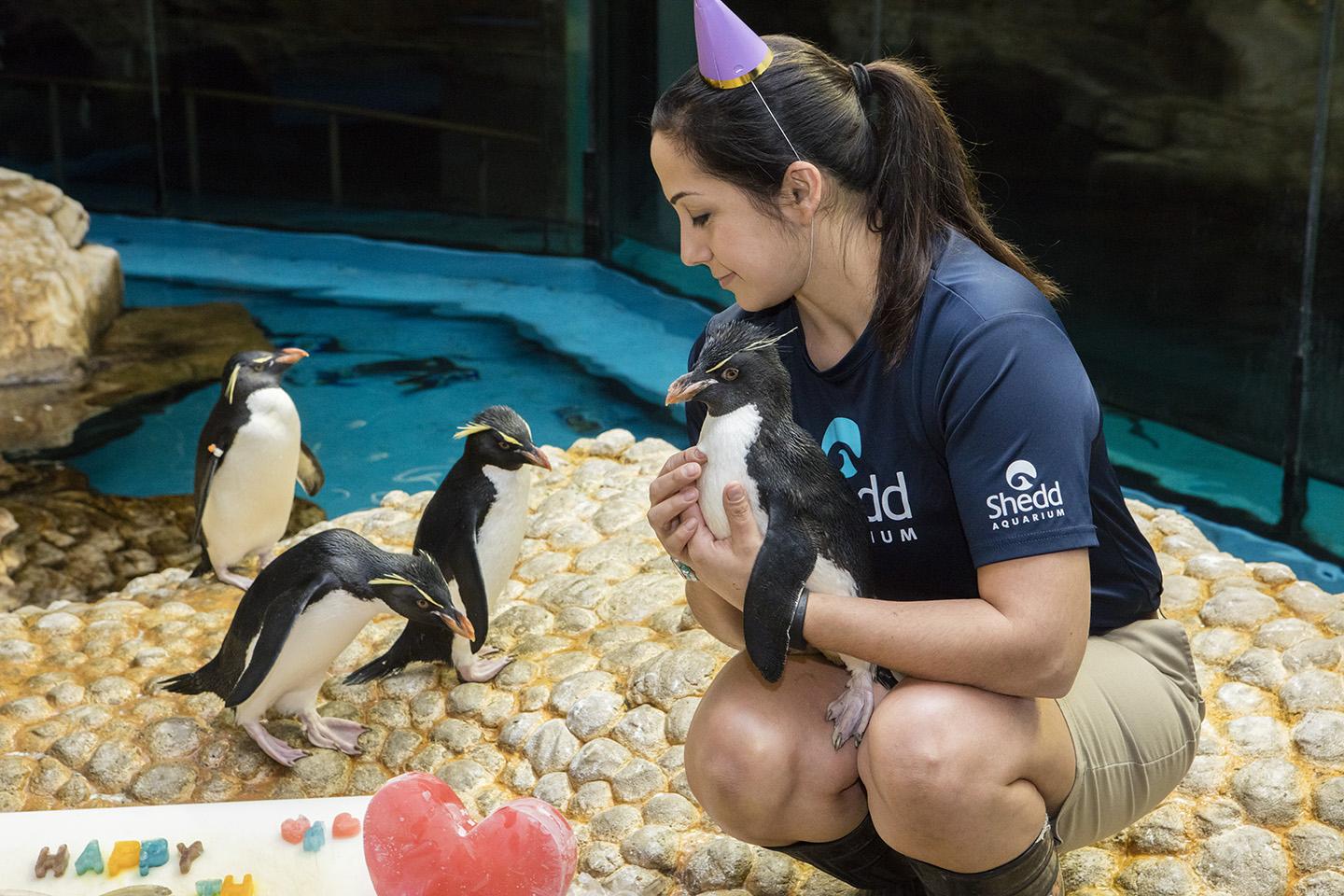 Read more from our interview with Hernandez below.

Had you done underwater photography before starting at Shedd?

No. I always loved aquariums and animals, but it wasn’t something in my head that this [was] where I’m going to be … My dad was a sailor up on Lake Superior, so I grew up sailing with my parents – we were on the boat a loat. Every summer, we would sail to Isle Royale, a little island up there that’s beautiful. Living in Marquette, Michigan, it’s beautiful. We hiked and we were outside a lot. My brother windsurfed. We were always kind of by the water.

What are the challenges of taking photographs underwater?

It’s a lot harder. Underwater, you’re having to deal with your buoyancy and making your body be where you want it to be and this equipment. And getting close enough to your subjects can also be kind of tricky. Water is much denser than air, so it’s just a lot different.

What’s it like to use the equipment that protects your camera underwater?

Underwater, it doesn’t feel heavy. It’s more getting it over the boat and into the water. Usually someone will hand it to me. 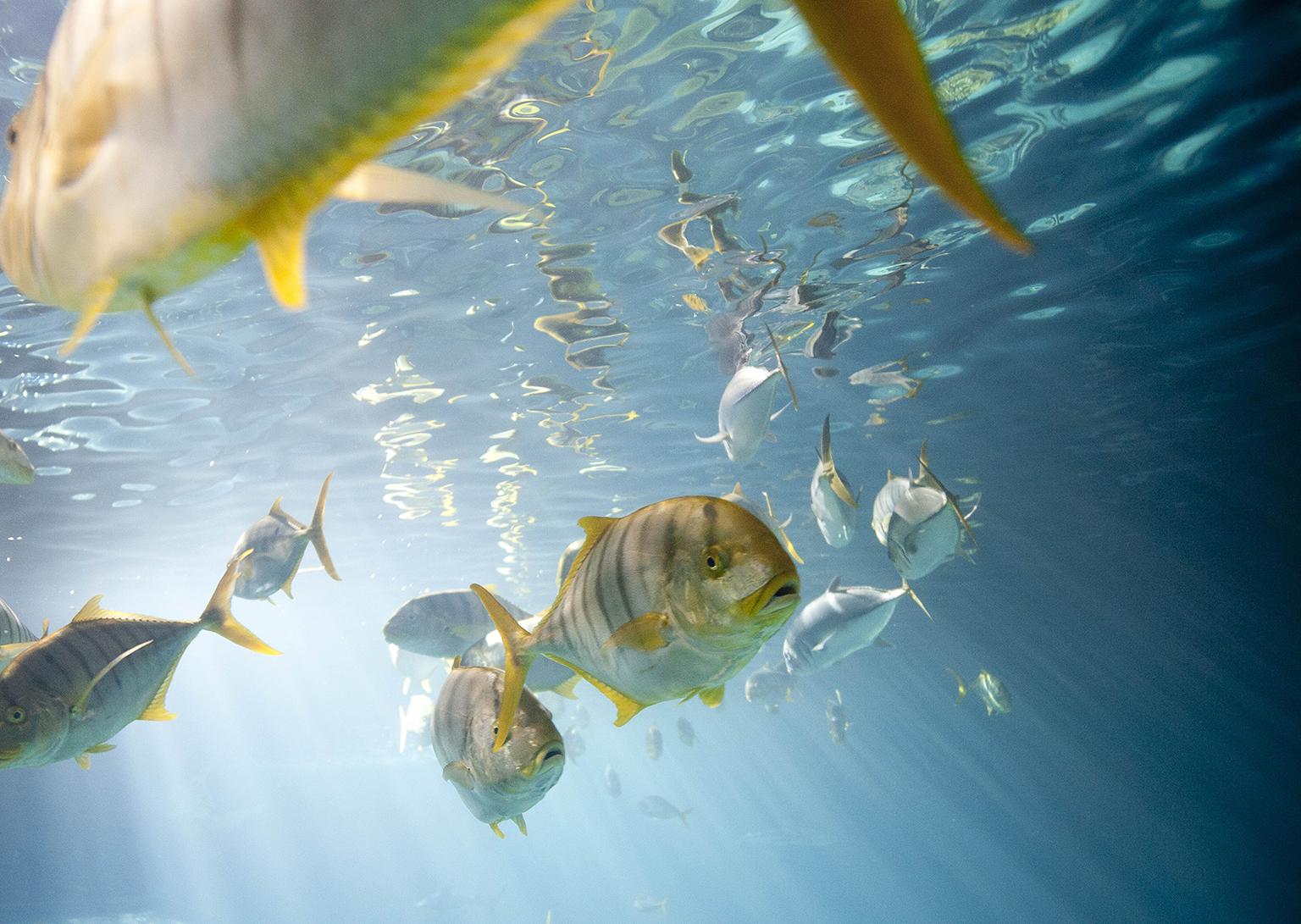 What kind of camera do you use underwater?

A Canon 5D. It’s an old camera, it’s from 2006. And I only use it underwater because I have housing [a protective case] for it. I have a much better, newer camera for everything else I shoot.

It’s really nice shooting here in the mornings before we open. It’s pretty cool being one of the only people in the galleries and getting to be so close. It’s like I have them all to myself, up close and personal with nobody else around. That’s pretty awesome.

What happened when you encountered a curious yellow-margin triggerfish inside Shedd’s Wild Reef shark habitat several years ago?

It wouldn’t get out of my way. It kept hitting my port – the port is the part that covers your lens – and it kept coming up. I’m like, “I’ve got enough of you. You need to move along.” 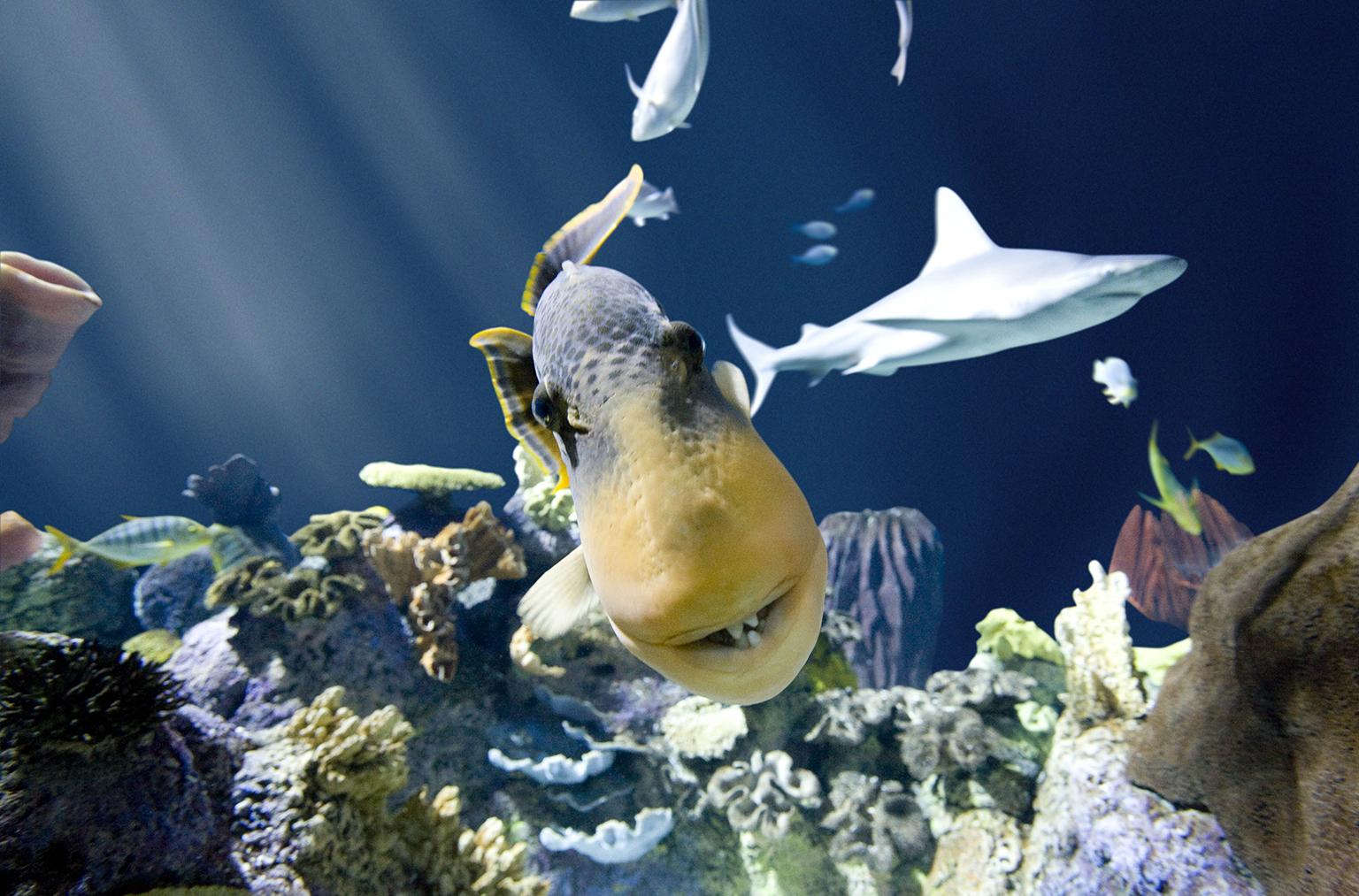 What about other animals – are you kind of like invisible to them in the water?

The belugas can get pretty curious. I think they curious more of my equipment. Other than that, they just – only the triggerfish has been super interested.

Where have you traveled with Shedd to photograph animals?

My favorite animal is the octopus. I just love them. I think they’re so beautiful, the colors. They’re just so crazy with eight arms and all those suckers. It’s just like, how was this made? 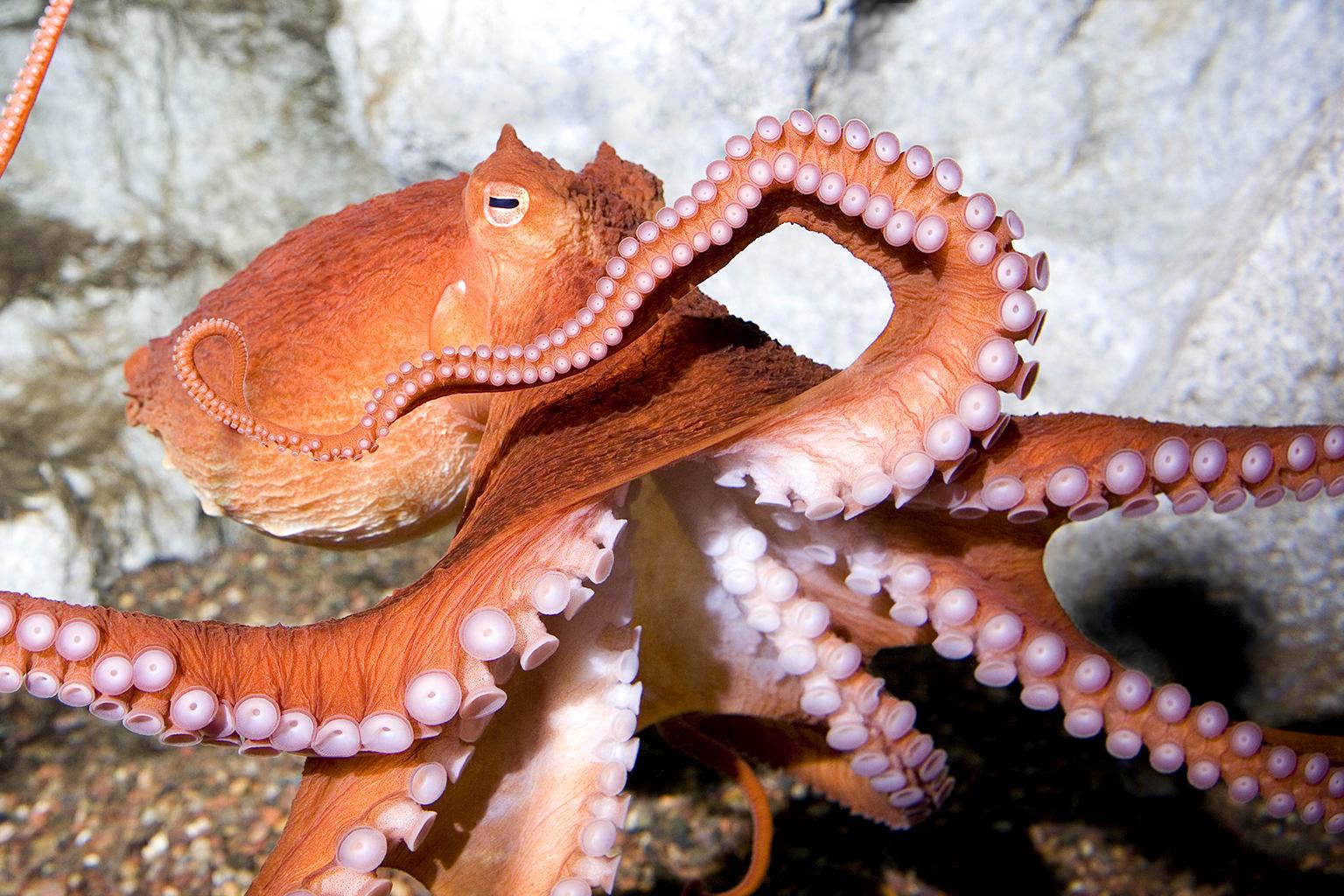