President Donald Trump is ramping up his rhetoric against so-called fake news. Beyond calling the media “very dishonest,” the president has accused the press of “distorting democracy.”

In a tweet early Sunday, Trump said “the fake news” is causing “division and distrust” and are “very dangerous and sick.”

The Fake News hates me saying that they are the Enemy of the People only because they know it’s TRUE. I am providing a great service by explaining this to the American People. They purposely cause great division & distrust. They can also cause War! They are very dangerous & sick!

Here to talk about the president’s attacks on the media are Chris Bury, a senior journalist in residence at DePaul University who won Peabody and Emmy awards for his work as a reporter and anchor at ABC News for more than 30 years; and Jennifer Nevins, a Trump delegate to the 2016 Republican National Convention and a conservative activist. Bury.

Is it fair to say that President Donald Trump is waging a war on the media? If so, is it all media? Some media?

Bury: Well, it’s pretty clear Trump is waging a war against the media. He calls us all “fake news media.” The only exceptions to that are news stories that he supports wholeheartedly. So, when he calls people the “fake news media” he’s talking about basically all of us. And the rhetoric is the language of tyrants. Stalin, Hitler, Mao called their critics including press “enemies of the people.” And in this latest rally in Pennsylvania, Trump even went beyond that as he called members of the news media “horrible, horrendous people.” And so, it’s abhorrent on its face. And it flies in the face of democratic tradition and certainly no president in modern history has waged an assault on the press the way Trump has done.

Nevins: I think that the president is waging an attack on certain segments of the media. I think that he has been very pointed in his criticisms to certain news outlets. CNN of course will be at the top of the heap. NBC, CBS the other alphabet probably to a lesser degree. But I don’t think at any point that he said that the press in general is an enemy of the people. Otherwise, I don’t think he would be having press conferences, granting interviews, giving reporters more access in many cases than the Obama administration did. The Obama administration was often criticized by members of the press for one reason, really, and that would be not giving them the unfettered access that they really desired.

So no, I don’t think they are or against the press in general, but I would say yes, he is doing battle with certain entities in the press. 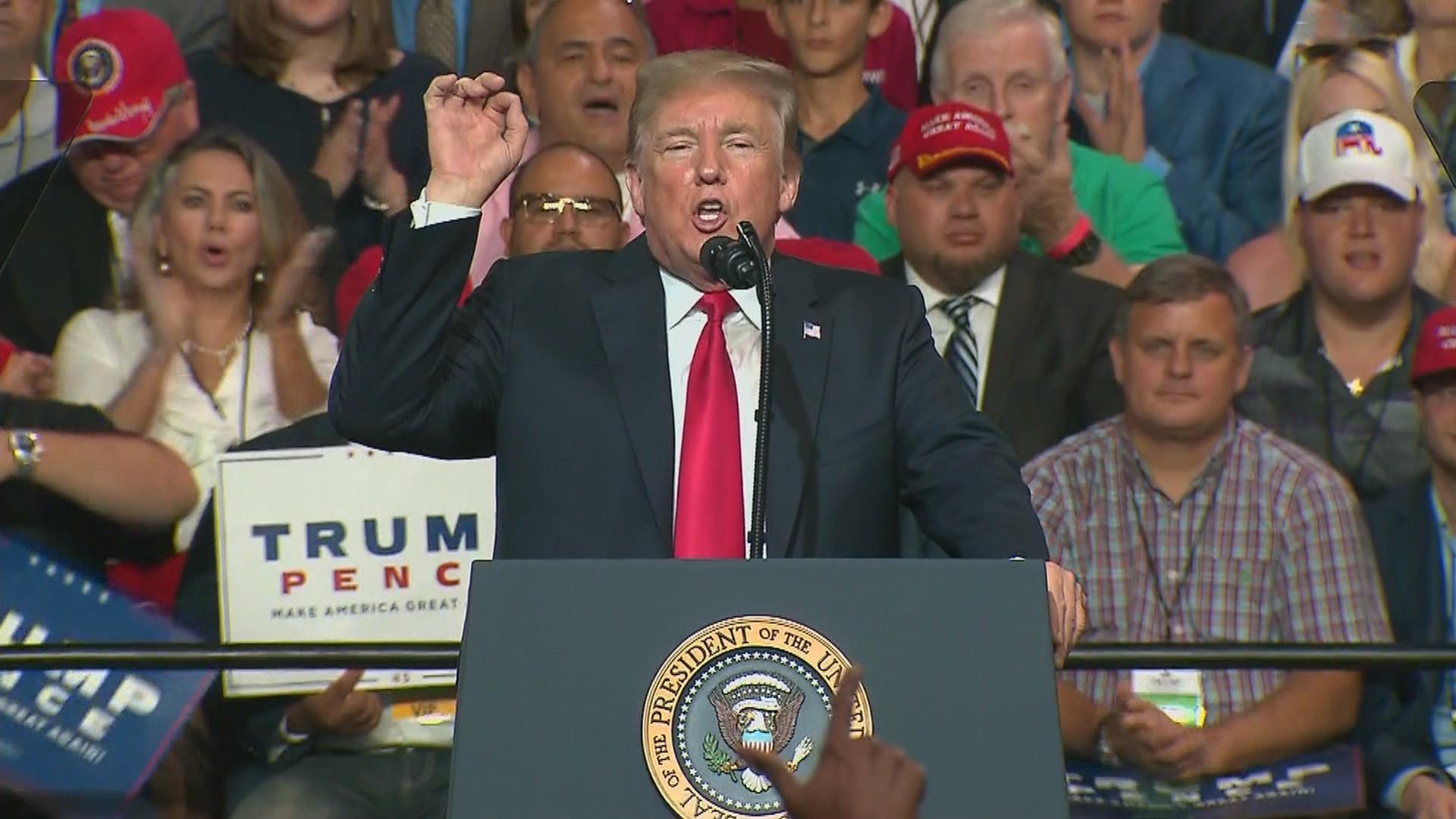 President Donald Trump addresses a crowd of supporters at a campaign rally-style event.

When the president repeatedly says the media is the “enemy of the people,” is that making it dangerous for journalists to do their jobs?

Bury: It certainly has the potential to do that. Just a few days ago, a Trump supporter or someone claiming to be a Trump supporter called into C-SPAN and said he wanted to shoot two CNN reporters and he named them. The New York Times columnist, Bret Stephens, who is a conservative politically, said he received at least three violent threats including a particular death threat after criticizing Trump. So, you can’t brush this rhetoric off. And clearly Trump is inciting his supporters. And there is a danger that many people have pointed out that, you know, an unhinged person could take guidance from Trump and do something that will lead to a real tragedy.

Nevins: Actually, there have been many times that he has said that it is not all media. You know, he has said this repeatedly. Sometimes his language is not precise and because I’m not a cultist and somebody who hangs on every word he says, there have been several points when I’ve said, ‘I wish that that had been couched in different terms.’ I understand the spirit of what he’s saying. I know his actions don’t indicate that he thinks that the media is the enemy. I know that. But he needs to state that in a different way sometimes. So I will I will give that definitely there are times when, for his own good and for the country’s own good, the language, the terminology could be sharpened up.

Would you say that some of the mainstream media has a bias?

Bury: Yeah, we have a bias for the truth and the facts. And we have a bias in favor of the underdog. We are interested in pursuing accuracy in what we report. I’ve been in national newsrooms for more than 30 years. Our supreme cultural value is accuracy. Inaccurate, sloppy journalists don’t last. So our overriding bias is to get the story right, is to get it correct. And, I kind of wish Donald Trump would spend a few days in a mainstream news organization to see how decisions are made.

Nevins: I don’t think that there’s any question that the mainstream media is extremely biased. I don’t think that a lot of the media figures that Trump references would even deny that they’re biased. I think that when you have a media – they’re biased in two ways: They’re biased for the way they present things that are happening in this country and they’re biased for what they don’t present. Not talking about the Korean War dead being brought home is one such example. You know, if this happened under Obama’s watch, they would be trumpeting it from the rooftops and rightly so because it’s a big event. But something happens here, and because it might cast Trump in a positive light, it’s crickets. You hardly hear anything about it aside from Fox News talking about it and conservative media talking about it and veterans talking about it. So yes, what is one to conclude when all you hear day in and day out is the news put through a filter, an anti-Trump filter. And I think that is for us not to say that it’s biased. You’d have to be asleep when you’re watching the news to come away with that perspective.

The Washington Post is keeping a running tally of false or misleading claims by the president: “President Trump has made 4,229 false or misleading claims in 558 days.” Some would argue that the media is not telling the whole story – that journalists pick the facts to fit their narratives. So, is there also a war on facts in the Trump administration?

Nevins: I haven’t seen their little list. I’m sure they are having a list. I’d like to point out they didn’t have any such list with Obama but that’s because they thought he was incapable of lying. So putting that aside, I think it depends on what you’re talking about. I think that Trump is a very colorful speaker. Does he sometimes – is he prone to embellishment, or kind of gilding the lily, when he says things? Is he given to hyperbole sometimes? I would say that yes he is. There are times when his language can be more precise than what it is. Does that mean that he is outright lying? I would have to look at the examples that Washington Post puts up. I don’t consider him a liar. So I need to look into the details of what they are referencing. I know that to say that Trump is a liar is something that they ascribe to him on a daily basis and they have a lot of motivation for doing that. So beyond that I would need to look into their specific examples.

Bury: No president is entirely happy with all the media coverage of his administration. You know, I covered Bill Clinton. I’ve covered George W. Bush. There were many times when those presidents were unhappy with the narrative. All presidents would rather have their own narrative out there. Bill Clinton would have much preferred talking about the economy and his budget surplus than he was defending himself during the Lewinsky scandal. I mean, I was up there every single day. And sometimes the president’s message of the day gets obscured by the news.

Today we’ve got Paul Manafort trial going on in Virginia and Rick Gates is going to take the stand. That’s not the narrative Donald Trump wants today. That’s tough. You know, that’s the news of the day. And as I said, no president thinks that the whole story gets out there the way they would like to do it. But, under our democratic system, we have an institutional role as reporters to keep a check on government officials and people in power. That’s our constitutionally protected role. And sometimes it pisses presidents off, and that’s just too bad. This kind of assault on the truth is unprecedented. All presidents have told fibs. All presidents have failed to fulfill campaign promises. All presidents have probably lied, but none to this extent at least in my memory. I mean, Richard Nixon had his enemies list that included reporters. But he never, in terms of his rhetoric, came out and did this daily or weekly barrage against the media the way Trump has done.