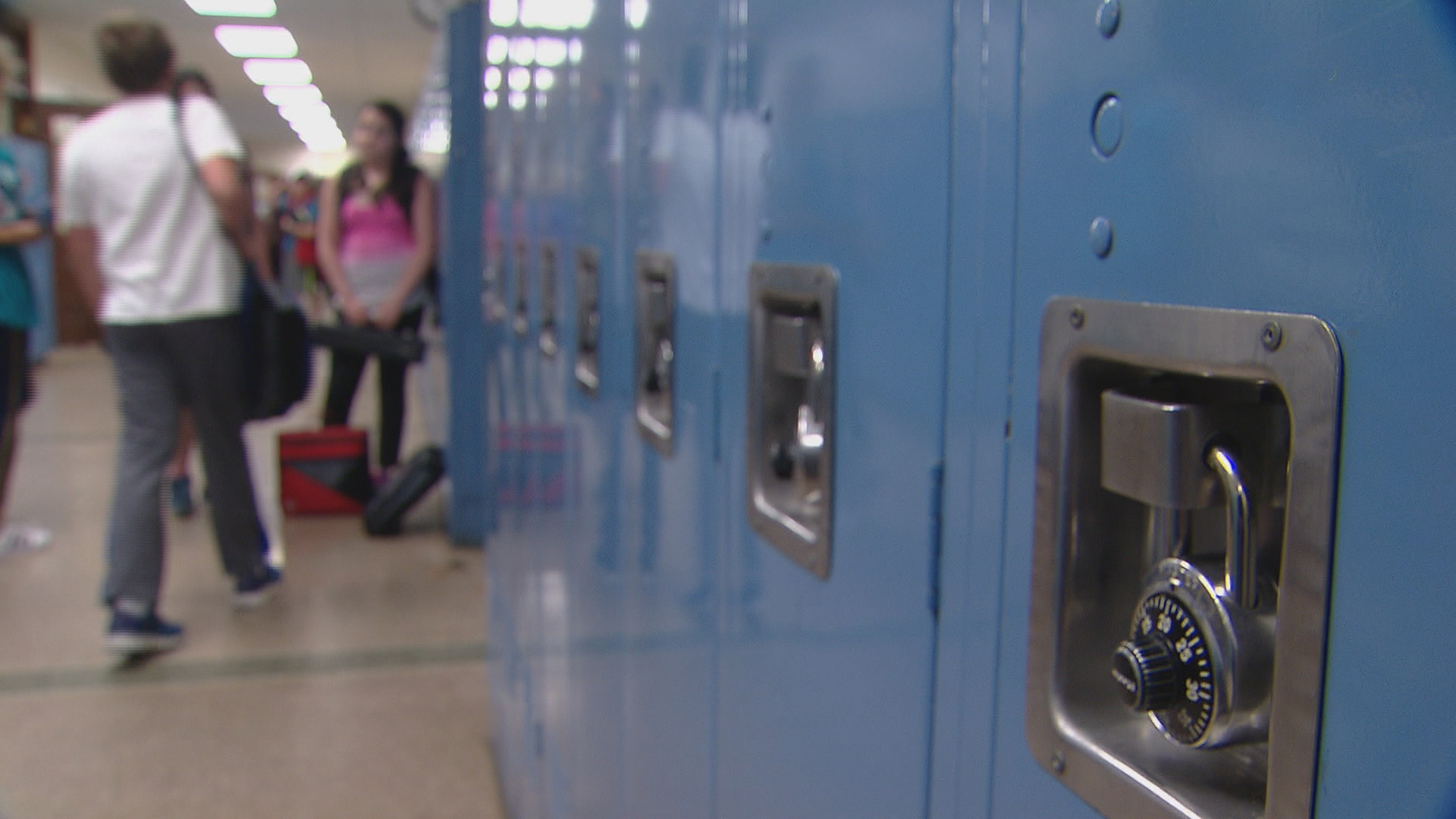 Erin Merryn was 6 years old when a neighbor began raping her. That abuse lasted until her family moved two years later, putting a stop to her nightmare – but only briefly. When she turned 11, a teenage cousin began molesting both Merryn and one of her sisters.

“He repeatedly told me, ‘This is a secret. I know where you live. I’ll come get you. You’ll destroy our family, Erin, you have no proof,’” she said.

Growing up in suburban Chicago, Merryn had been taught about “stranger danger.” An officer with the Schaumberg Police Department showed up at her school each year to warn kids against taking candy from strangers or answering the door when their parents weren’t home.

But more than 9 in 10 sexual abuse victims under the age of 18 know their abusers. What are children supposed to do when the person hurting them isn’t a stranger but someone they see every day – a family member, a neighbor, a teacher?

“For too long the responsibility was put on children to tell when they’re being touched inappropriately … But they didn’t define teachers as people they couldn’t trust, and people who could be offenders,” said Terri Miller, president of Stop Educator Sexual Abuse, Misconduct and Exploitation, or SESAME.

“When it’s a teacher that’s offending them, they’re confused. They don’t know what to do with that.”

That’s where Erin’s Law comes in.

First passed in Illinois in 2011, the law requires public school districts statewide to provide sexual abuse prevention education each year to staff and students in pre-K through 12th grade. More than 30 other states have since passed similar versions of the law.

The goal is to help children understand what constitutes inappropriate touching and relationships through personal body safety lessons, and give victims the resources to come forward and report their abuse safely. Already it has played a role in several arrests in Illinois and beyond.

Now an activist and author, Merryn, 33, quit her job in 2010 to focus on getting this legislation passed. She did eventually speak up about her cousin, who admitted to the abuse but never went to jail. If schools at that time had been required to teach about sexual abuse prevention as they now are, she believes she would have spoken out sooner.

“When it came to being abused, the only message I got was to keep quiet,” she said. “I’m confident had someone been educating me and telling me, ‘If this ever does happen, you will be believed’ … if that had been reinforced and educated to me, I know I would have told someone.”

In the wake of a scathing Chicago Tribune report detailing how systemic failures within Chicago Public Schools allowed hundreds of students to be sexually abused over the past decade, parents and advocates have begun to question why Erin’s Law isn’t being discussed as part of a solution. Already, vague requirements and lax oversight from the state has led to some Chicago schools not following through with the law at all.

CPS CEO Janice Jackson released a four-page plan of action after the Tribune series was published last week detailing plans to strengthen internal policies and practices in an effort to prevent this sort of abuse from happening again. It made no mention of Erin’s Law. 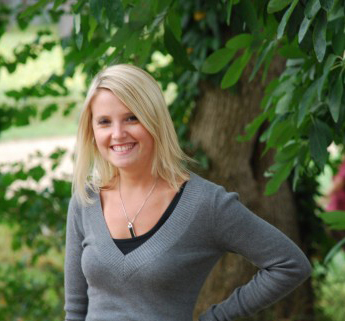 “I was disappointed she didn’t reference this law in this action plan at all, since it is a state law,” said Char Rivette, executive director of the Chicago Children’s Advocacy Center.

“Where are the preventive measures?” Chicago Teachers Union member Emily Penn asked in a statement this week. “CPS, for example, has made no mention of Erin’s Law, which mandates that schools teach body safety awareness and give children tools to report abuse in a safe way, as well as staff training to respond to concerns and report appropriately.”

A search on the CPS website for documents containing “Erin’s Law” yields no results. The state’s other largest public school districts – U-46, Rockford, Indian Prairie and Plainfield – all include at least some form of parent letter or presentation relating to the law online.

A similar search on the Illinois State Board of Education’s site offers little beyond a 2012 report from an Erin’s Law task force and a handful of documents that make only passing reference to the legislation’s requirements.

Merryn said she’s repeatedly spoken to ISBE about one problem district in particular that has not abided by her law’s requirements: Chicago Public Schools.

“There have been a few other districts I’ve heard pop up here and there, though as the years go on, I’m hearing about it less and less,” she said. “But the thing that constantly comes back to me, and this constant thing I’m seeing, is Chicago Public Schools continuing to not teach it.”

The requirements of Erin’s Law under Illinois’ version are rather shapeless compared to some other states. Merryn says she was told it had to be made as flexible as possible in order to pass through the state legislature.

Where other states may mandate how much time is spent on these lessons or identify who is allowed to lead them, Illinois schools are required only to provide this type of education once per year.

“The law unfortunately is not really specific as to what those trainings should look like,” Rivette said.

Beyond that, ISBE says it doesn’t specifically track which districts are implementing Erin’s Law trainings in their classrooms. It instead relies on Regional Offices of Education, which use an evaluation instrument to monitor a given school’s compliance with all state and federal laws, according to board spokeswoman Jackie Matthews.

Districts that don’t comply could face a reduction to their recognition status and be placed on probation. But that evaluation doesn’t apply to CPS, which is subject to some different state statutes than other Illinois school districts because of its size.

“The thing that constantly comes back to me ... is Chicago Public Schools continuing to not teach (Erin’s Law).”

There are more than 30 designated regions statewide, each with their own regional superintendent. The only exception is the city of Chicago, whose “superintendent” is listed simply as the Illinois State Board of Education. Matthews said the state eliminated funding for the CPS ROE in 2004, but is now looking to hire an executive director and additional staff to run that office.

CPS and its schools are currently assigned a status of “fully recognized,” meaning they presumably meet all applicable laws. But for years, Merryn says she’s heard from CPS faculty who say their schools haven’t been following Erin’s Law.

“I’ve had dozens of Chicago Public School teachers contact me saying Erin we have never done your law,” she wrote to Jeffrey Aranowski, ISBE’s ‎executive director for Safe and Healthy Climate, in a September 2016 email provided to Chicago Tonight. “It was required starting in the 2013-2014 school year and here we are 2016 and still hearing of schools not doing it or only doing certain grade levels.” 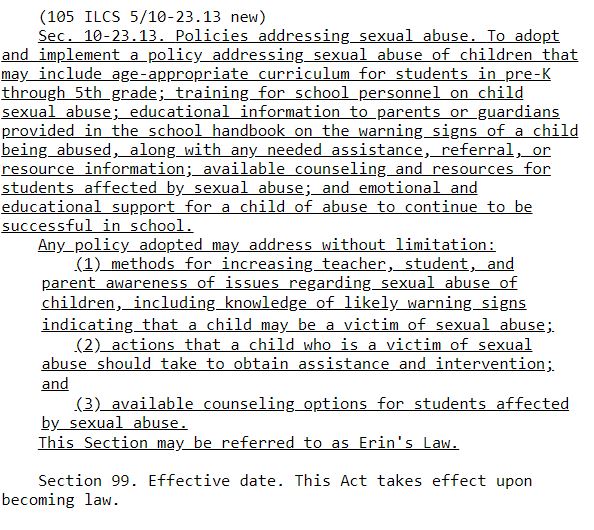 Erin's Law as defined by Illinois state government. This text was later amended to apply law to all grades K-12.

Merryn had been corresponding with the state board earlier that year about ways to hold school districts accountable under the law. In her email she said she hadn’t heard back from anyone with the board since the previous January.

The state board now plans to revamp its existing evaluation instrument in the upcoming fiscal year to “embed best practices and more technical assistance,” Matthews said following an inquiry from Chicago Tonight. ISBE also says it will create a separate evaluation specific to CPS that’ll place a “greater emphasis” on Erin’s Law following conversations with Merryn.

But Merryn says she hasn’t spoken with anyone from ISBE in more than a year. She questions both the timing of the board’s proposed plans and its likelihood to complete them.

“There’s just no follow-up,” she said. “There’s no follow through.”

‘What more do you need?’

Following the Tribune report, Janice Jackson and Mayor Rahm Emanuel have said “no stone will be left unturned” as the district works to improve student safety. But Chicago Public Schools did not respond to inquiries about its compliance with Erin’s Law. Instead, a CPS spokeswoman said they are “eager to work with organizations who support strengthening efforts to keep students safe” and provided a grade-by-grade curriculum on sexual health that’s made available to all schools.

Already the district has agreed to pay former assistant U.S. attorney and Illinois Executive Inspector General Maggie Hickey $500,000 to conduct a top-to-bottom review of the district’s procedures as they relate to sexual misconduct. Jackson and Chicago Board of Education President Frank Clark on Tuesday also announced CPS will transfer investigatory power over all sexual abuse cases dating back to 2000 to its inspector general’s office.

One step Merryn believes CPS should take to protect students is to make sure it’s following a law that’s already on the books.

“It would make a huge difference. An enormous difference,” she said. “Someone over there needs to be held accountable for this because that’s just inexcusable when you read about these things and what’s going on.

“These kids need it, especially in the Chicago Public Schools, and especially after this report. You’re going to continue to let it fall on deaf ears? I mean, what more do you need?”