From 2012-16, the district as a whole spent more than $250,000 on gift cards. These were often used as reimbursement in lieu of petty cash or CPS procurement cards, which had been discontinued. Though many of these were used for legitimate purposes, the report states CPS was spending an additional 18 cents on the dollar for these cards through service and transaction fees from vendors.

Along with a clerk and computer technician, the principal is said to have taken five iPad Air computers and 30 new backpacks carrying school supplies that had been donated to the school.

They then allegedly intimidated a teacher at the school, forcing her to lie to investigators by saying the $500 was used as reimbursement for book purchases. After the OIG issued its report, the principal and clerk resigned, and the computer tech was subsequently fired. The board then placed “Do Not Hire” designations on each of their personnel files.

He also allegedly stole another $400 directly from the school and mismanaged school checks and reimbursements over the course of his three-year tenure, to the tune of more than $8,500. Those funds remain missing. The principal resigned during the OIG’s investigation and received a DNH designation on his file.

During this investigation, it was revealed another CPS employee had exploited holes in the sales records of one of the district’s vendors to steal more than $4,000 in gift cards. She and her husband then used that money to pay for a trip to Cancun.

To remedy this situation, Inspector General Nicholas Schuler recommended the Board of Education enact policy changes to track gift cards so they can be audited and codify how and when schools are allowed to use these cards. 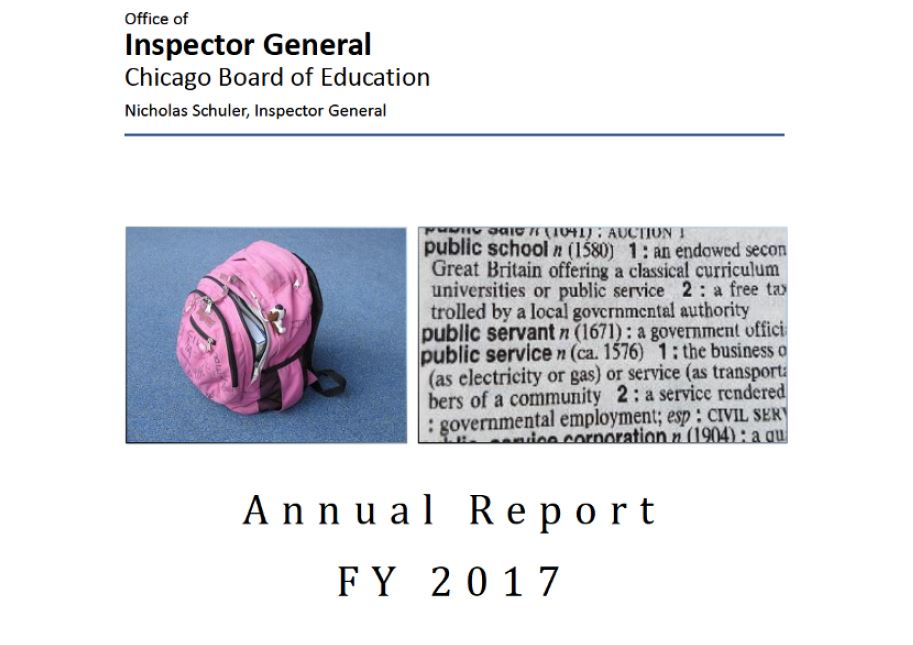 The district says it has done just that, updating its policy to keep employees from being reimbursed for gift card usage and stopping them from using cards to cover expenses from school trips.

“We appreciate the Office of Inspector General’s assistance in identifying employees who have not upheld the values of our district, particularly when their actions deprive students of resources or access to a full education,” CPS spokesman Michael Passman said in a statement.

“During the past year, CPS has worked to address the incidents outlined in the report, and we are reviewing the Inspector General’s recommendations to determine whether they will strengthen district operations and prevent misconduct.”

The district added that gift cards could only be purchased using donated or fundraised money, not district or School Based Budgeting funds.

Though it occurred in after fiscal year 2017 ended, the OIG report included a section detailing its ethics investigation into now-former CPS General Counsel Ronald Marmer and former CEO Forrest Claypool’s role in covering it up. Both men resigned last month after that report was made public.

The report also included details of the OIG investigation into improper practices involving students at York Alternative High School, located inside the Cook County Jail. The principal at that school was temporarily banned from the school, but was later reinstated by the district, which said it had identified “serious errors” in that report.

In total, Schuler’s office received 1,457 complaints between July 1, 2016 and June 30, 2017. About a quarter of those fall into a catch-all “miscellaneous” category, while mismanagement (19 percent), residency violations (12 percent) and discourteous treatment (10 percent) comprised the bulk of the remaining complaints. The OIG opened 276 investigations into those complaints, citing budgetary restrictions and staffing size issues as limiting factors keeping them from investigating more complaints quickly.

“As previously reported by this office,” the report states, “the inability to investigate more complaints creates a substantial risk that instances of fraud and employee misconduct go undetected.”

Other investigations contained in the report:

Nov. 9: A Chicago Public Schools watchdog report recommended her termination just two months ago, but on Thursday, York Alternative High School Principal Sharnette Sims received an apology from the district and was told she’ll be reinstated to her position, effective immediately.