Good and Bad Bugs Found in Your Garden 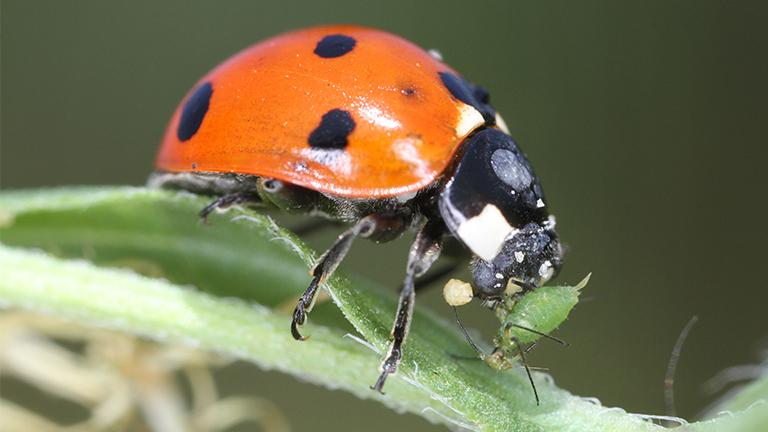 Local gardeners, be advised: not all bugs found in your gardens are harmful to plants.

Because some beneficial bugs can help wipe out damaging ones, gardeners shouldn’t immediately reach for the insecticide at the first sign of an insect, said Tom Tiddens, supervisor of the Chicago Botanic Garden’s plant health care department.

“You’re always going to have a bad bug before you have your good bug move in because that’s the [good bug’s] food source,” Tiddens said. “So if you react too quickly, you’re going to kill both types of bugs – and the bad bug could resurge faster.

“Whenever I see an insect problem, I have a little bit of patience and wait to see if the good bugs come in.”

Tiddens recommends gardeners regularly monitor their plants and familiarize themselves with harmful and beneficial bugs. Below, several types that Tiddens said Chicago gardeners should watch out for. 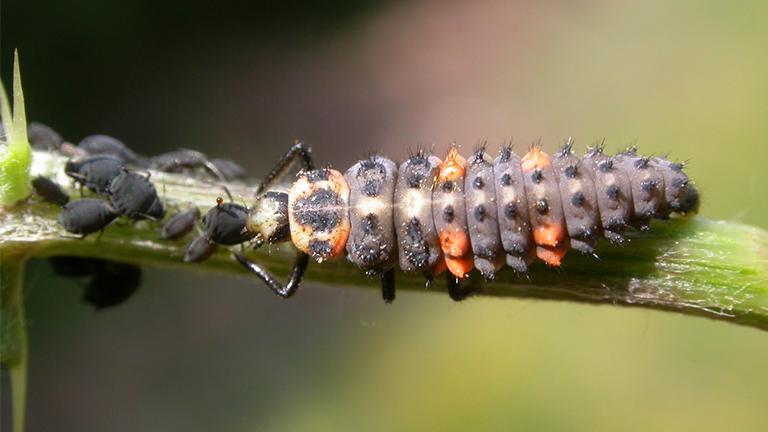 Ladybug larvae look a lot different than mature ladybugs, but can devour even more aphids, according to Tiddens. (Gilles San Martin / Flickr)

Two types of ladybugs are found in local gardens and both are beneficial because they feed on harmful garden pests like the tiny, soft-bodied aphid (see below).

The convergent lady beetle, a native North American insect, and the multi-colored Asian lady beetle, which was intentionally brought to the U.S. from eastern Asia in the 21st century to control harmful bug populations, look nearly identical. Tiddens said the convergent ladybug is a little darker and less aggressive than its Asian counterpart.

“Ladybugs are out there working for us. They go after soft-bodied insects, especially aphids, and can really help us out,” Tiddens said.

With their alligator-like appearance, ladybug larvae can sometimes be mistaken for harmful insects, according to Tiddens. He shows photos of the larvae to educate gardeners.

“The larvae can eat twice as many aphids as the adults will,” Tiddens said. “Just knowing what this little guy looks like is good to know.” 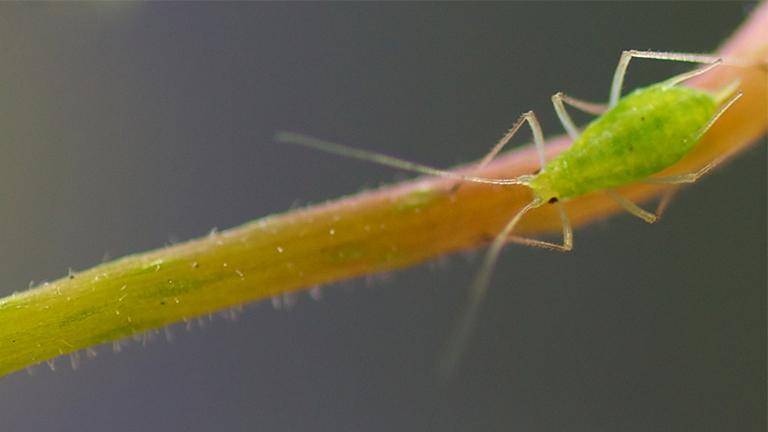 Aphids, which are difficult to spot with the naked eye, are a common garden pest. (Peter and Michelle S. / Flickr)

Aphids are small, pear-shaped insects that weaken plants by piercing them and sucking out their sap. They also secrete a sticky substance called honeydew, which can develop into a mold that blocks out sunlight, inhibiting the plant's photosynthesis. Aphids can slow a plant's growth, damaging its leaves (which may look discolored or curled as a result), but are rarely fatal to mature plants.

Tiddens called aphids the "poster child of garden pests" due to how prevalent they are.

There are over 4,000 species of aphids, which can vary greatly in color. At under one-eighth of an inch in length, most of them are quite small, according to the Morton Arboretum.

While aphids may be common, Tiddens said they're fairly easy to combat if a gardener regularly checks plants and monitors for the pests.

"A strong stream of water can wash them off," Tiddens said. "Or you can use soaps or oils, which are more eco-friendly than pesticides with chemicals." 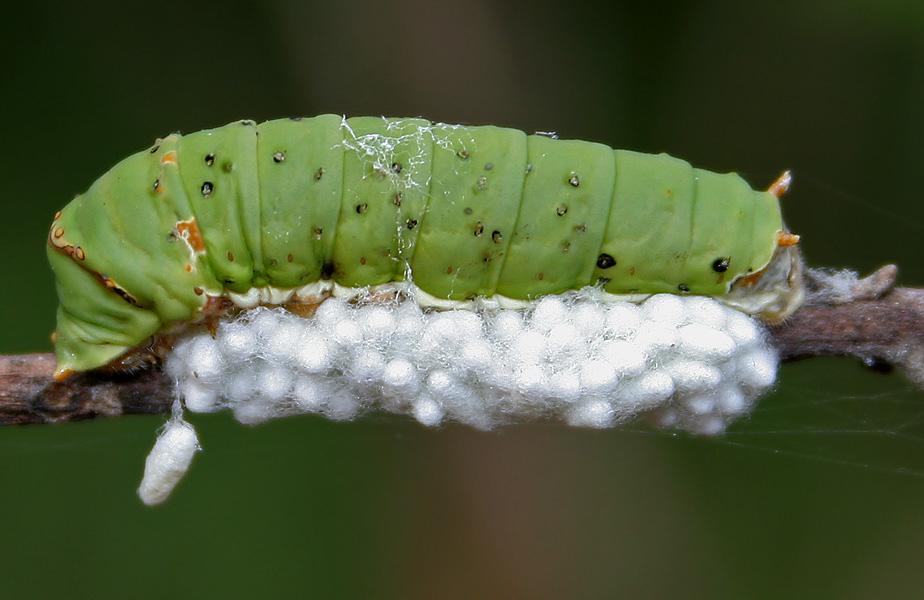 A dead caterpillar parasitized by Braconid wasp larvae, which are inside the cocoons on the bottom. The holes where the larvae emerged from are visible on the caterpillar. (J. M. Garg / Wikimedia Commons)

While some wasps may elicit fear, the several wasp species known as parasitic (or parasitoid) wasps can be a gardener's best friend.

The braconid family of parasitic wasps, which include several thousand different wasp species, is the most common in the area, according to Tiddens.

"They'll search out for certain types of insects and they'll lay eggs on or inside the insects," Tiddens said. "In turn, the egg hatches and the little larvae of wasps will actually feed on the insect."

Parasitic wasp larvae will enventually burrow outside of their dead hosts, which include worms and caterpillars, then spin cocoons where they'll mature inside before emerging as adult wasps. 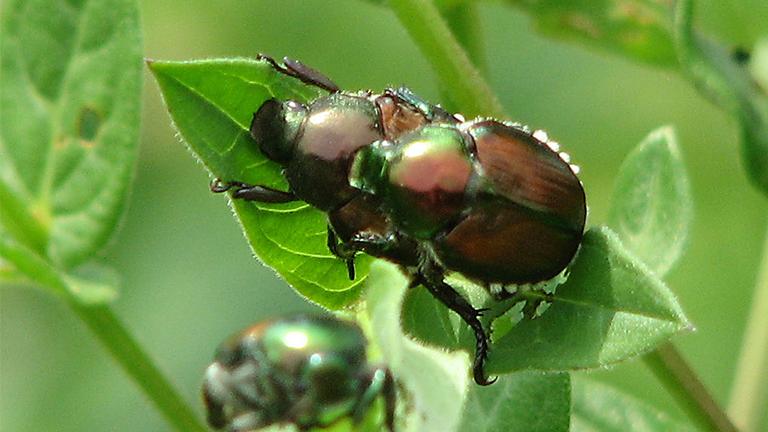 When Tiddens started working at the Chicago Botanic Garden more than 25 years ago, he never came across Japanese beetles. Since then, he's seen the non-native invasive pests establish themselves in the Chicago area.

"Once they come in, they're pretty much an annual pest," Tiddens said.

Japanese beetles pose more of an aesthetic problem to plants by skeletonizing leaves and flowers, leaving them covered in holes, according to Tiddens. Some of their favorite foods include grapes and roses.

Tiddens said if the metallic green beetles, which are a little less than half an inch long, are spotted in a garden, the best time to strike them will be either at nighttime or morning.

"When it's cooler out, like at night or in the morning, they don't fly or move very well," Tiddens said. "You can take a cup or bucket of soapy water and just tap the leaf they're on and they'll fall right off into soapy water." 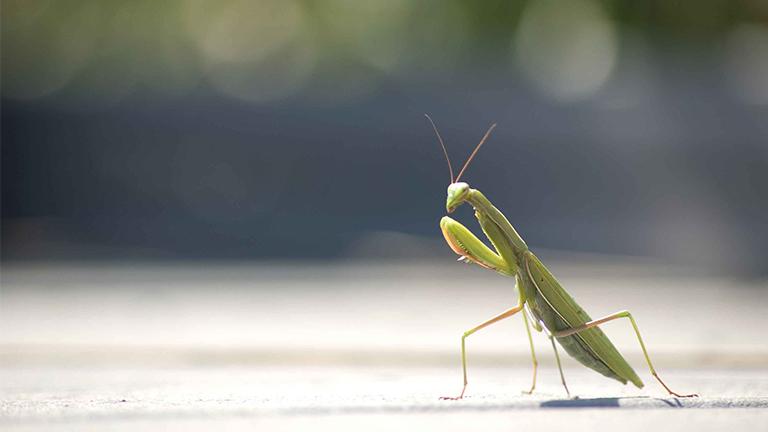 Depending on what they're eating, praying mantises can be helpful and harmful to gardeners. (U.S. Fish and Wildlife Service)

Due to their wide range of prey, praying mantises fall into a sort of gray area.

"They'll eat anything they come across, even each other," Tiddens said. "They're pretty indiscriminate as far as eating other insects."

Praying mantises devour everything from bad bugs like mites, moths and beetles to good bugs like wasps, bees and green lacewings. Although they're native, gardeners can purchase mantises, as well as ladybugs, to release into their gardens as pest control.

"If you have a hedge that you know will be loaded with aphids every year, that might be a good place to release [praying mantises] because you know the pest will be there," Tiddens said. "In other situations, they'll move out and pretty much eat anything they come across." 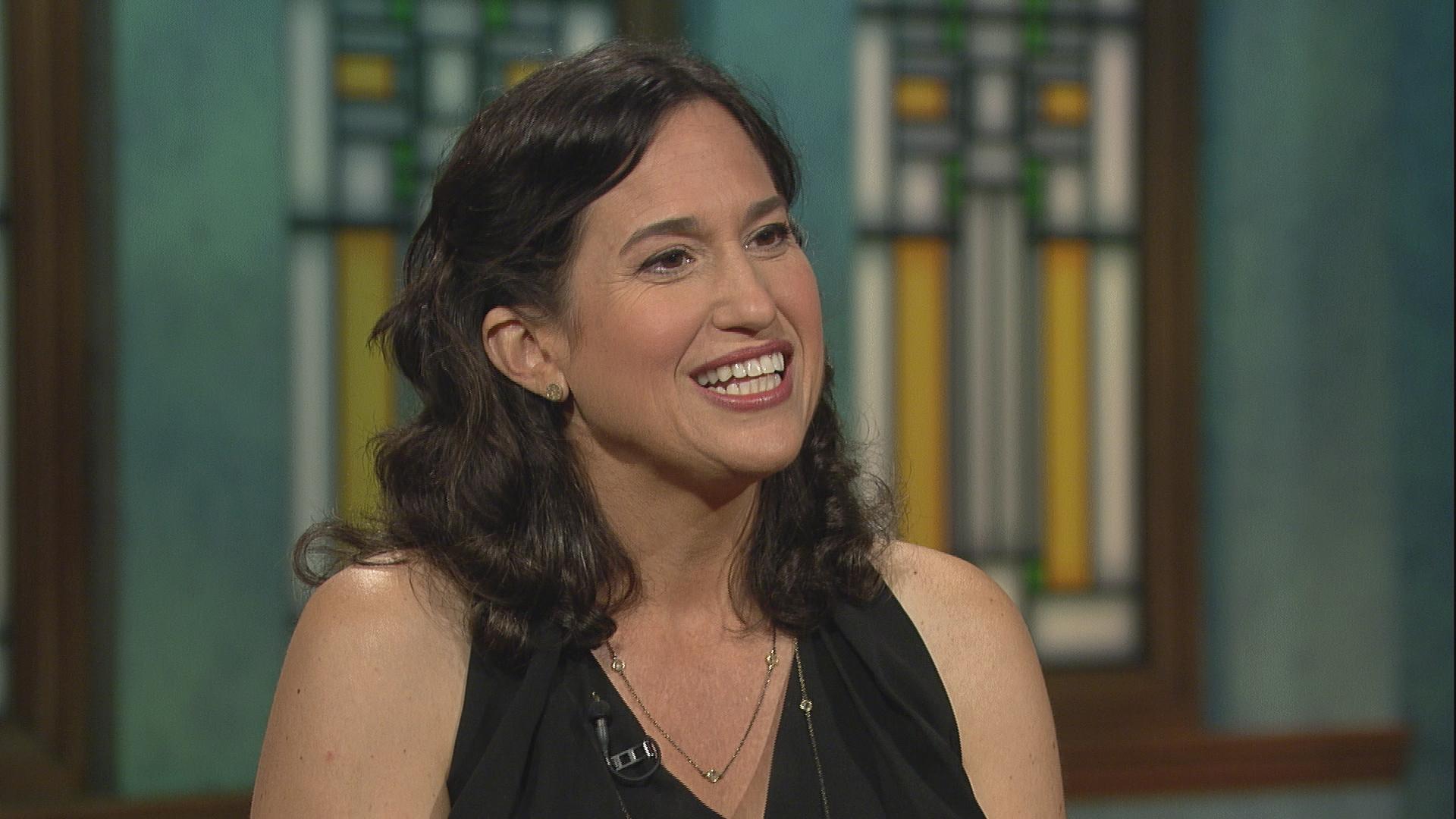 Tips for Midsummer Gardens, from Planting to Pruning to Harvesting

Aug. 1: The WTTW organic garden is growing at an astonishing pace, with sweet corn towering over the plot and many vegetables ready for the grill. But if your own garden–like ours–is looking a little too lush, not to worry: There are easy ways to tame it, says Jeanne Nolan, the Organic Gardener. 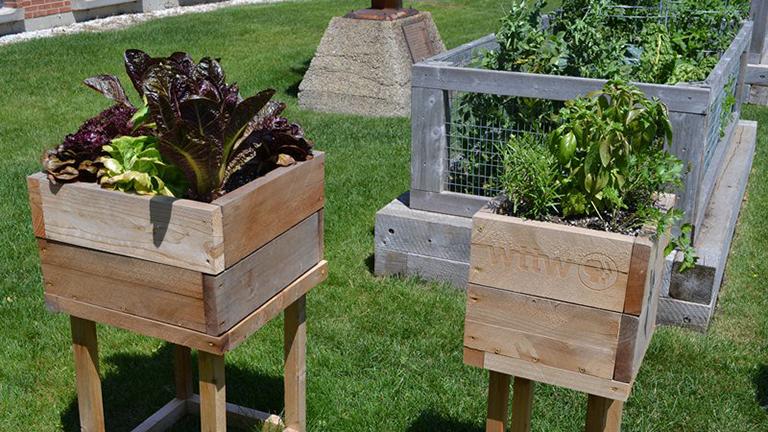 June 28: We get a tasty sampling of the first harvest of our garden with organic gardener Jeanne Nolan. 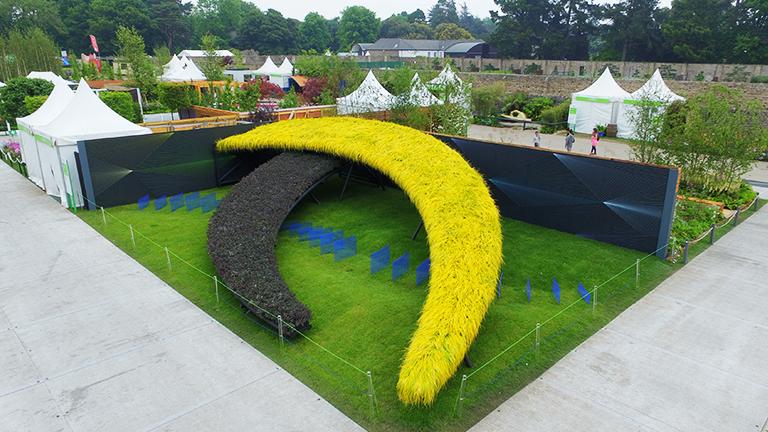 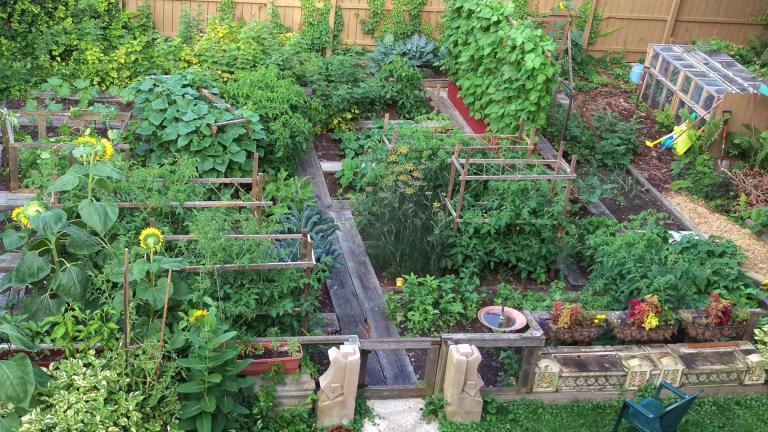 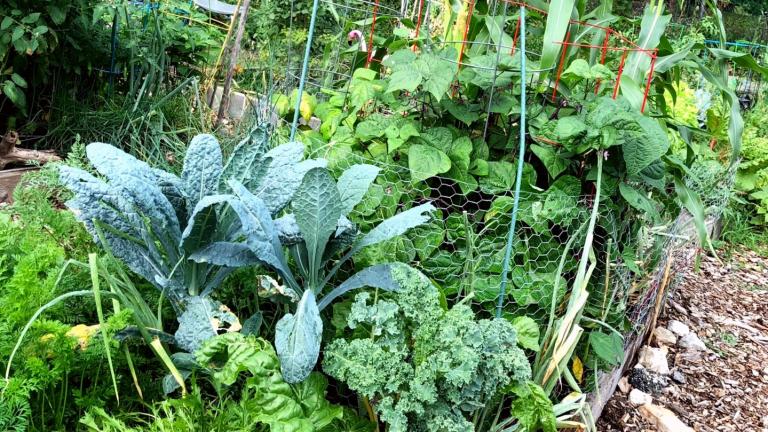 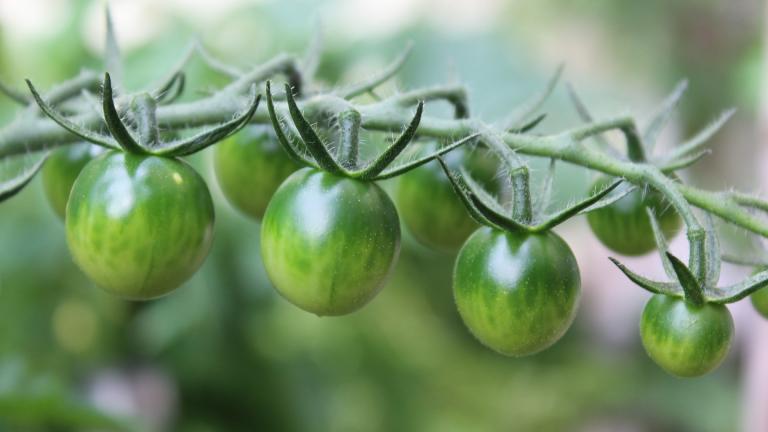 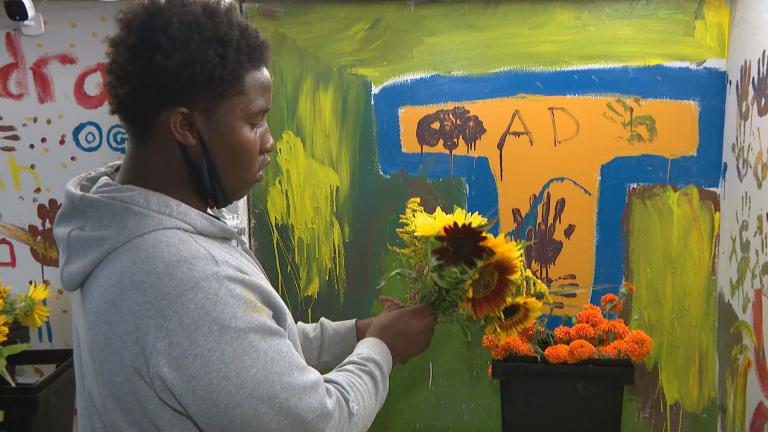