He could become the highest ranking federal public officeholder ever to go to prison.

According to prosecutors, Hastert will face one of his four alleged victims of sexual abuse, this one known in court documents as “Individual D.” He will also face the sister of another alleged victim, Stephen Reinboldt, who died of AIDS.

The two will testify before federal Judge Thomas Durkin before he decides on a sentence.

Hastert pleaded guilty to a charge related to the way he withdrew that $1.7 million which allowed him to evade having to report any of it. This was used to pay “Individual A” the hush money the two had agreed upon.

The attorney for “Individual A” confirmed he will not be in court Wednesday.

The sentencing guidelines of the agreement call for probation to six months of jail time, although Durkin can deliver a longer sentence. And from recent comments in court hearings, many observers believe Durkin might.

He will also consider the 60 letters sent in support of Hastert that plead for probation. These letters were written by Hastert’s family members, former colleagues in Congress, former staff members and other acquaintances.

“He has always been selfless with his time and talents and has been incredibly devoted to the success of others. If one of his students or wrestlers ever needed anything of him, he would be there for them, and he was never happier than when he could watch someone he helped succeed.”

“I know his heart and have seen it up close and personal. We all have our flaws, but Dennis Hastert has very few. He is a good man that loves the lord. He gets his integrity and values from Him. He doesn't deserve what he is going through.”

At the same time, “Individual A” is suing Hastert for the remainder of the money they allegedly agreed to as part of the payoff: $3.5 million. The attorney for “Individual A” says Hastert still owes $1.8 million of the total, and that she believes the feds won’t seize the money her client has already gotten. She says that although nothing was written in ink, Hastert has to pay up.

“My client entered into an agreement with Mr. Hastert,” said attorney Kristi Browne. “They both agreed this was a reasonable sum. There are a lot of oral contracts that are enforceable and people enter into them all the time. In the 1990s, McDonald’s settled for millions based on an oral contract. Most people think of a contract being a written document, but it really is just an agreement between two parties.”

In court filings from prosecutors, it’s alleged that “Individual A” had been molested by Hastert when he was a 14-year-old student on a sleep-away trip with him. His attorney says he has suffered depression, anxiety, panic attacks and unstable employment throughout his life. 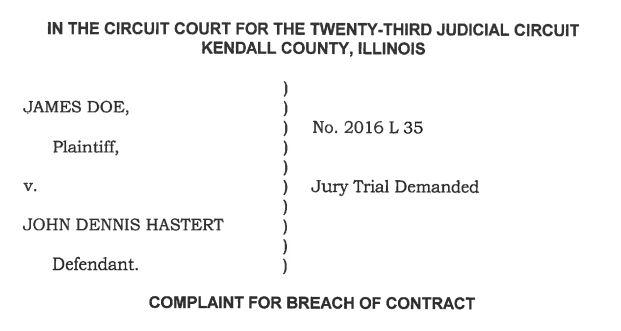 Document: Read the complaint filed by Individual A.

Still, unlike the victims who will come forward, “Individual A” has asked to stay anonymous.

“Everyone handles a situation like this differently,” Browne said. “He’s a very private person and that’s how he chooses to handle it. Different victims respond to it differently and process it differently, and they should do what they feel most comfortable doing.”

Browne says “Individual A” waited 30-plus years to confront Hastert because he didn’t realize that what happened to him was abuse until he heard about other victims.

Hastert’s sentencing is scheduled for 10 a.m. Wednesday. We asked Hastert’s attorneys today if Hastert indeed would show for the sentencing, or if they may ask for a delay – we also asked if the defense would present further character witnesses – the attorneys simply said “no comment.”