Amid all the talk of Madigan vs. Rauner, arbitration bills, and absentee lawmakers, it's hard to overlook the fact that there is still no agreed-upon state budget, now three months into the fiscal year.

Today, Illinois Comptroller Leslie Munger said that Illinois is still spending money at a clip it cannot sustain, even though many state programs have been left in the dark. In a news release, Munger stated:

Just over two months ago, I stood before you to warn that if the General Assembly and Governor were unable to pass a balanced budget, there would be severe consequences for the state. Today I'm here to say that those consequences have come to pass and the situation will become more dire the longer we try to fund state services without a budget.

Just how badly has the budget impasse damaged the state's financial situation?

When or if a solution does come, it will be much more painful than it would have been had lawmakers agreed on a budget three months ago.

Without a budget, 90 percent of state spending is still happening by court order. This includes pension payments, Medicaid payments, payroll, and some social service programs. At issue is the fact that there is $2.4 billion less revenue this year because of the rollback of the income tax. If spending continues at this rate, the state will be $8.5 billion behind on its bills by the end of the year – up from $4 billion only a few months ago.

The math, however, doesn’t take into account the 10 percent of the budget that isn’t getting paid right now – most visibly, the Illinois Lottery – but also money for higher education, college scholarships, and social service providers.

Add those payments in, and the comptroller says the numbers are staggering.

“We could be looking at as much as a $12 billion budget deficit,” Munger said. “This is an unsustainable situation. We are spending more than we are taking in, and it only gets worse the longer we go on without a balanced budget in place.”

To put it into perspective: A $12 billion deficit is greater than one third of the total budget.

Despite the crisis, it’s hard to find tangible signs of the ongoing budget crisis.

Child care advocates lament that many state-funding providers have closed their doors.

In the secretary of state’s office, licenses still get processed as normal, and a spokesman says funding for the office should hold for the rest of the year.

Colleges and universities say they have reserves and other revenue streams like tuition they’re relying on in the interim, so the crisis hasn’t hit them yet. Thus, in many of the most visible ways, state government continues to operate as usual. It could be one of the reasons there are still few signs of any sort of breakthrough politically.

The Senate today passed a bill to restore about $4 billion in human service funding, and lottery funding, but the governor has indicated he would veto that. The impasse continues to center on the fact that the governor has insisted upon including changes to collective bargaining, workers compensation and public worker wages – though Democrats have said that the union items are unpalatable.

The state’s other top financial officer, Democrat Michael Frerichs, told us today he believes the governor must take his items off the table. 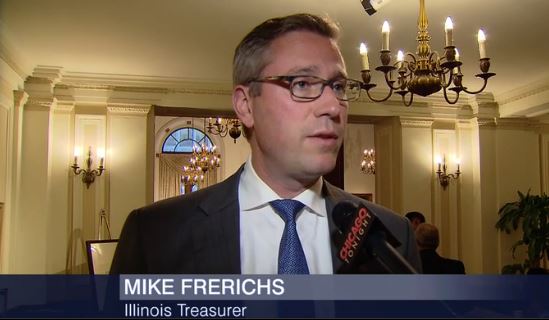 “Even the governor says we need revenue to balance the budget,” Frerichs said. “My hope is he comes to the general assembly and talks about revenue and cuts, and doesn’t bring extraneous issues to the table. Because if they just focused on the budget, they could get it solved right away.”

But Comptroller Munger believes the governor’s so-called “turnaround agenda” should be part of the solution.

“We cannot tax our way out of this, we need to get a vibrant economy, and part of that requires the things the governor has talked about. They are in fact budget items. They will help our own state’s bottom line immediately; it will help our businesses stay here.”

Despite the urgent tone from the state’s bill payers – the House is out of session for three weeks, the Senate is adjourned until Oct. 6.