When we visited last Wednesday, the Chicago Botanic Garden was hot with anticipation that the rare and odd flower, typically found in the jungles of Sumatra in Indonesia, was about to show it's smelly face to a Chicago crowd.

Officials said that all signs pointed toward a bloom either that night or the next, but the night came and went, and so did the next, and the next, until it was clear something was amiss. 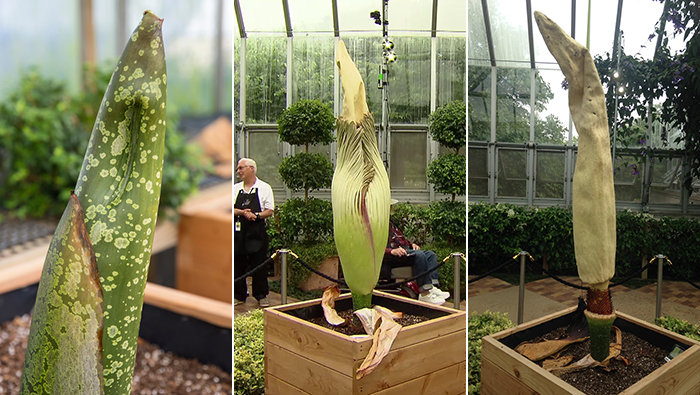 "It looked like Spike wasn't going to open over the weekend, and it was already about four to five days past the time we thought it would open," said outdoor floriculturist Tim Pollak.

Botanists Pollak and Shannon Still say Spike simply lacked the energy to complete its bloom. The flower was supposed to look like this illustration, at left. It was to produce a nasty odor that smelled like Limburger cheese and dead mammals to attract dung beetle pollinators. So why didn't it?

"We just don't know," said Pollak. "Mother Nature. You can relate it to a tomato plant in your garden – it produces flowers, but it doesn't produce the fruit." 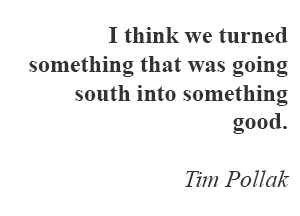 On Sunday, botanists removed the spathe – the outer covering of the plant – manually in front of dozens of curious onlookers. It wasn't the outcome they'd hoped for, but it wasn't a complete loss.

"There's certainly a disappointment, a let down," admitted Pollak. "But it opened up an opportunity for us to teach the public about the rarity of this plant. I think we turned something that was going south into something good."

The crowds were noticeably smaller and the enthusiasm was somewhat diminished when we visited Tuesday.

"Disappointment isn't the right word. It is what it is," said visitor Norman Eckstein. 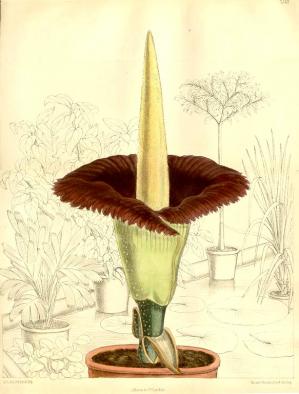 Illustration of a blooming titan arum from Curtis’s Botanical Magazine. (Courtesy of the Chicago Botanic Garden) "It would've been exciting to see the natural bloom. It's still a great opportunity to learn about the factors that would have to come together to let the bloom happen," said Matt Golosinski, who was also visiting the garden.

As for that patented stinky smell of death, you can still catch the faintest waft of it if you get really close the plant. Botanists say it would've been this times 1,000 had Spike actually bloomed.

And this isn't where Spike's story ends. In fact, he is still very much alive and will be put back into the garden's production facility for further research.

"We're going to let him go into dormancy," said Still. "This big stem will collapse and fall over. It'll shove all its resources back into the corm, and next year it'll send up a leaf."

About a half-dozen other corpse flowers are growing in the production lab – most as old as Spike. But a bloom is indeed rare, occurring 10-14 years into the life cycle of the plant, which consists of the repeated growth and death of leaves until something different emerges.

"You only know they're going to bloom when, instead of sending up a leaf itself, it'll send up a flower stalk," explained Still.

There's no way to predict when or if that will happen. It could be next year. It could be never. Which is why the Chicago Botanic Garden relished Spike's rare moment in the spotlight – even if it couldn't complete the show.

The Chicago Botanic Garden on Wednesday reports that Spike, despite not blooming, has produced some pollen. So, his offspring will live on. Spike was taken off display today and officials will conduct the final autopsy on what went wrong in the coming weeks. The garden estimates that 75,000 people came to see the famed corpse flower, including more than 8,000 on Sunday alone.

For Chicago Tonight, this is Paris Schutz.

A titan arum named Stinky recently bloomed at the Denver Botanic Garden, which took more than 8,000 photos over 18 days to capture its lifecycle. Watch the incredible 43-second time-lapse video below.

Chicago Tonight's Paris Schutz visited Spike at the CBG on Aug. 26. Watch the video below.

Did you see Spike? Tell us what you saw in the comments section below. You can also share your photos of Spike with us by using the form below.