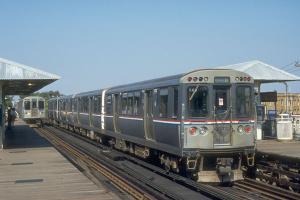 A new federal grant aimed at speeding up travel time between Chicago's downtown and O'Hare airport was announced on Thursday. Ash-har Quraishi has the story on Chicago Tonight at 7:00 pm.

Chicago is receiving $20 million in TIGER Grant III funding to help rehabilitate a portion of the CTA Blue Line and to expand the Chicago Bike Sharing Program that is launching next year. The announcement was made on Thursday by Mayor Rahm Emanuel, Federal Transportation Secretary Ray LaHood and Gov. Pat Quinn at the Logan Square L stop.

“From our roads to our runways to our rail, our infrastructure is one of Chicago’s most important assets,” said Mayor Emanuel. “I want to thank Secretary LaHood, Senator Durbin, Representative Luis Gutierrez and the Illinois delegation for their support. We’re providing more stations, more service and more safety across the City, and this TIGER grant will help ensure we provide a solid foundation for the city’s future.”

“I want to thank Secretary LaHood, Governor Quinn and Mayor Emanuel for their leadership in securing funding for this project which will strengthen the city’s infrastructure and create good-paying jobs in the Chicago-area,” said U.S. Senator Dick Durbin (D-IL).  “We developed the TIGER grant program over two years ago to empower local officials to identify nationally significant transportation projects in their communities that will improve safety, spur economic development, reduce congestion and create jobs.  Illinois has done well under this highly competitive program due to the coordination and hard work of our state and local officials, groups and organizations.”

“These important investments are necessary to grow our economy, create jobs and ensure that our state remains strong for years to come,” Gov. Quinn said. “A top-notch transportation system attracts new investment and jobs to Illinois and I want to thank Secretary LaHood, Senator Durbin and the Illinois congressional delegation for their continued leadership in Washington on behalf our state.”

The CTA and CDOT, which will administer the Chicago Bike Share Program, are sharing the $20 million grant, with the CTA receiving $16 million and CDOT $4 million.

The CTA will use the TIGER grant funding to eliminate the slow zone between the Logan Square L stop and the California L stop on the Blue Line to allow trains to move at 55 miles per hour instead of the current 25 miles per hour, as well as help reduce maintenance and operating costs. 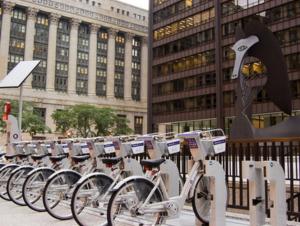 This is part of the CTA’s efforts to repair several miles of track to complete improvements along the Blue Line between Chicago’s Downtown Loop and O’Hare International Airport.

Logan Square is a candidate to receive a bike sharing station in 2012. The city is still accepting and reviewing bids to operate the program.

The system will provide a convenient, easy-to-use transit option envisioned for short trips.  Users will pick up a bike from a self-service docking station, ride to their destination and drop off the bike at the nearest station.

More than 800 projects applied for $14 billion in funding, and Chicago is one of 46 approved applications to receive funding from a pool of $511 million.  Chicago’s funding of $20 million matches four other cities as the highest award.