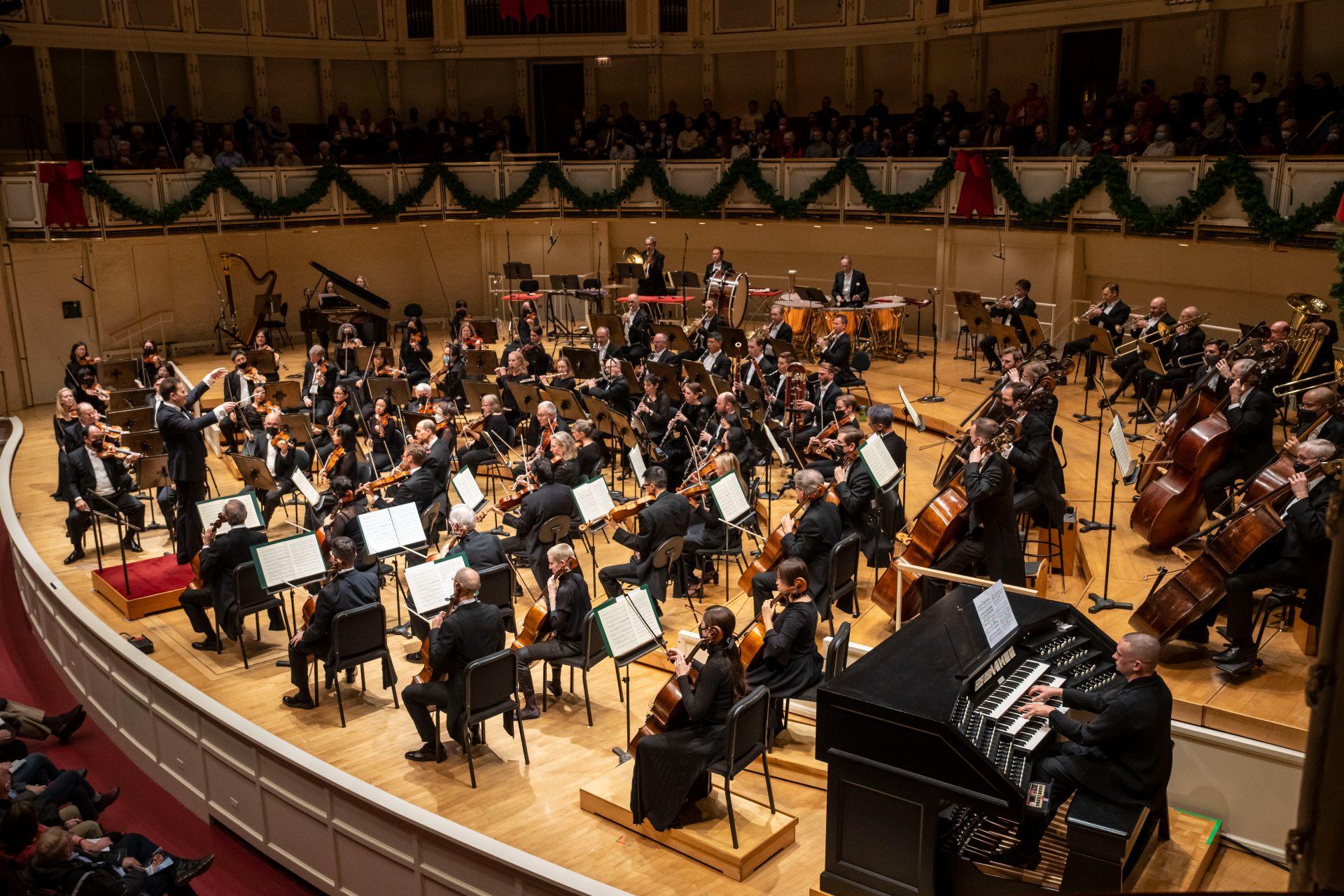 The CSO and organist Cameron Carpenter in performance of Saint-Saëns’s “Organ Symphony” on Dec. 15. (Photo by Todd Rosenberg)

Something intriguing happens when an organ is added to the usual assemblage of symphony orchestra instruments. It’s almost as if an opera singer with a notably distinctive voice has been added to the usual “cast.” And it subtly but notably changes the overall tenor of the score.

Proof of this sensation was fully evident as organist Cameron Carpenter joined the Chicago Symphony Orchestra and precision-tuned guest conductor Nikolaj Szeps-Znaider this past week in a sonically dramatic concert that included the work of three French composers: Paul Dukas, Francis Poulenc and Camille Saint-Saëns.

The brief opening work on the program was Dukas’ playful (organ-free), widely known work, “The Sorcerer’s Apprentice” that was composed in 1897 and subsequently popularized by a little guy named Mickey Mouse in the Walt Disney film “Fantasia.” Opening with the violins (joined by the winds and brass), it suggested the presence of haunting, mischievous spirits, and subsequently exploded with the sounds of brass, timpani and an array of percussion, all building to a stormy, big bang conclusion.

Next came Poulenc’s “Concerto in G Minor for Organ, String Orchestra, and Timpani,” a richly varied and dramatic work scored for solo organ and strings, with a genuine workout for master timpanist David Herbert. There was a big sound from the organ to start, and then a turn to a more pensive take, with the strings adding a lyrical riff and the basses gently plucked. 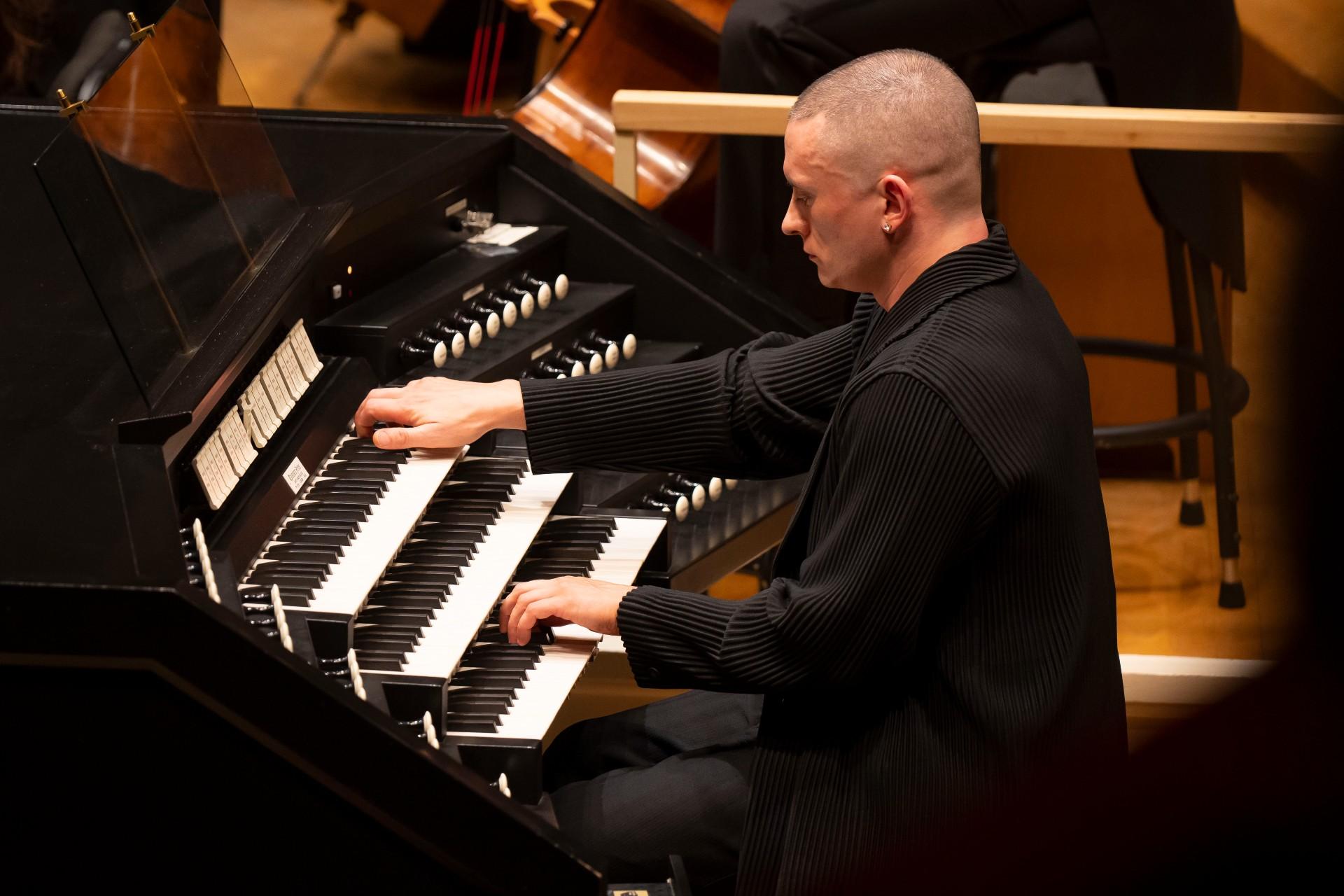 The organ then erupted into what was almost a warning sound, with the strings working at great speed and generating a series of often surprising mood shifts. Next, the piece took on a sort of third dimension of sound, with the work’s overall mix of voices conjuring a notable urgency. And there was a return to a more pensive mood before the symphony once again took on an intensely stormy quality, with a sudden big blast from the organ before a return to quiet, and then yet another shift to a great frenzy of sound with a formidable organ solo.

A return to calm, with a slew of what could be described as conversations among the instruments (plucked violas, dreamy cellos, big chords on the organ), was followed by a final blast by the strings in this richly theatrical and often unpredictable 22-minute work that was superbly performed.

The concert’s second half was devoted to Saint-Saëns’ fascinating “Symphony No. 3 in. C Minor,” a stunning work, brilliantly performed by a full orchestra, organ and piano (four hands). It opened with the beautiful sound of the violins and violas, plucked cellos, the flutes and other winds, and then grew into a more frenzied state with the addition of brass.

The overall grandeur of the piece, with its dramatic impact and its singing melody, was undeniable. And then there was the elegiac sound of the organ backed by the strings. A lush lyricism followed, along with the rich contributions of every section of the orchestra, with the powerhouse sound of the timpani, the fleet playing of the flutes and other winds, and the bold entrance of the brass. The growing speed of the work led to a thrilling blast of sound from the percussion section. And then came a return to a fully frenzied state, with the big sound of timpani again, and the organ beneath it. Quite the grand finale.