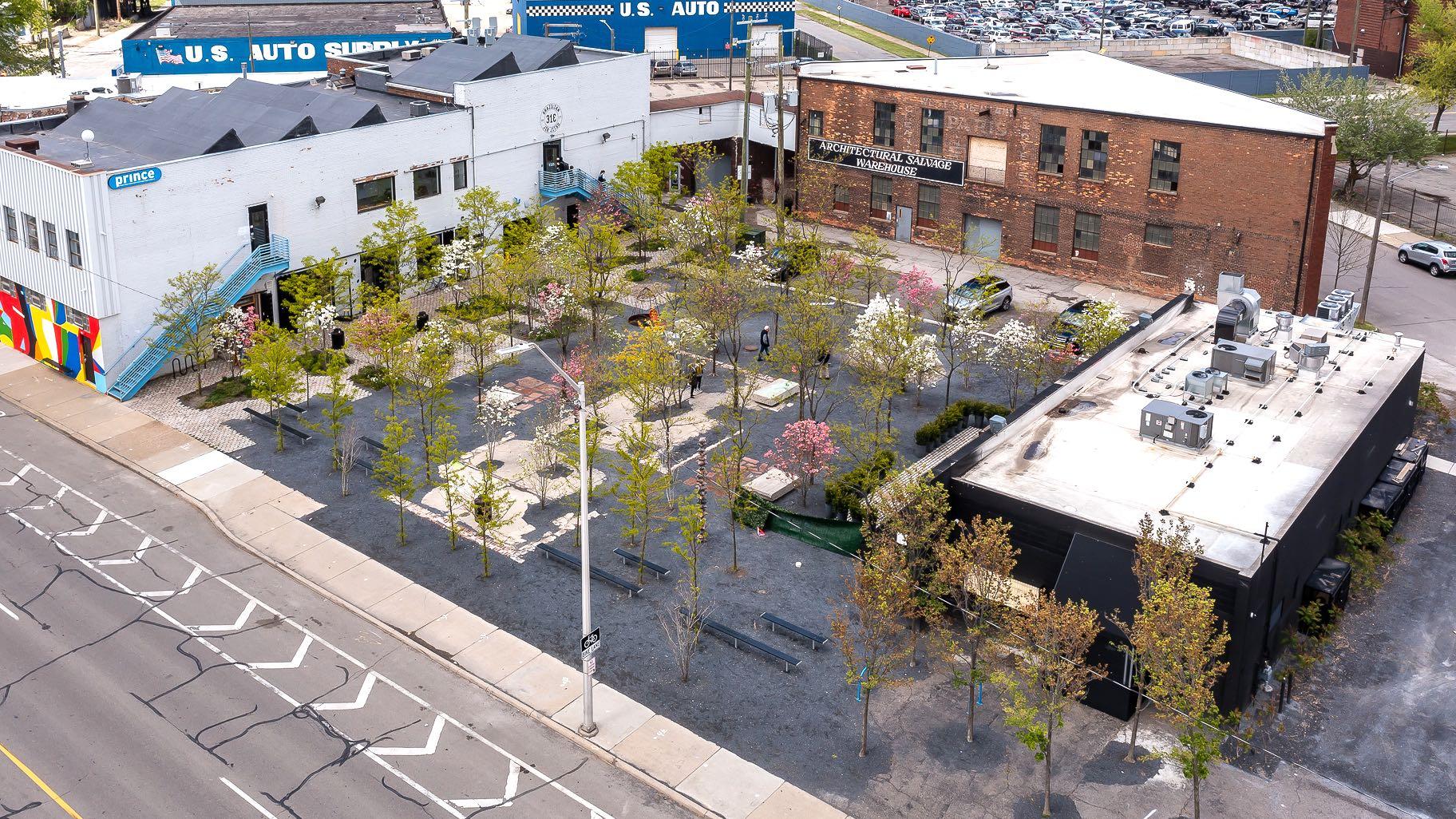 Transformation of a parking lot in Detroit demonstrates what depaving can do. (Courtesy Prince Concepts and The Cultural Landscape Foundation)

It’s been more than 50 years since Joni Mitchell lamented “they paved paradise to put up a parking lot.” All these decades later, the time might be ripe to revisit those lyrics.

A grassroots “depaving” movement that originated in Portland, Oregon, is slowly spreading across the country, with communities ripping up strips of asphalt and concrete to make way for pocket parks, gardens and nature play spaces. Affiliates of Depave Portland have popped up in cities like Detroit, Cleveland and Nashville, forming a loose network that is now being joined by Chicago.

Mary Pat McGuire, associate professor of landscape architecture at the University of Illinois, is leading the Chicago program under the umbrella of her Water Lab.

“At Water Lab, we’ve always worked on stormwater issues and urban flooding. Depave Chicago kind of emerged out of that,” McGuire said. “While we’re working at a planning and policy level around making green infrastructure much more the norm in Chicago, we really needed a program that says, ‘Hey, we need to take out some asphalt.’”

McGuire and the Depave Chicago team have spent 2022 in start-up mode: spreading the word about the program, growing support, connecting with community leaders and organizations, and hosting webinars to explain how depaving works.

“This is also a year of deep listening,” McGuire said. “I’m learning so much more not just about issues but also about how communities want to work with a program like this. It’s critical to have a lot of buy-in and a lot of direct input from residents so that whatever goes in place of the paving really addresses the issues they’re facing.”

All of this groundwork is building toward a spring 2023 pilot project, still to be determined, which will be funded through a grant from the Walder Foundation, a Skokie-based philanthropy that supports environmental sustainability through its Resilient by Nature program.

“A year from now I hope I can say, ‘Yeah, we’ve done our first project and we’re onto the next, we have two more in the pipeline,’” McGuire said.

First, here’s what depaving isn’t: McGuire isn’t proposing the bulldozing of expressways or a return to the days of dirt sidewalks.

Projects tackled by the various Depave affiliates have been selective, almost surgical, in their removal of excess or underutilized pavement, sometimes involving just a few hundred square feet but typically falling somewhere between the size of tennis or basketball court.

Blacktopped school playgrounds have been a particular target in Portland, with asphalt sliced into squares like a batch of brownies and pried out by volunteers one slab at a time. Trees, shrubs or plants are then swapped in. 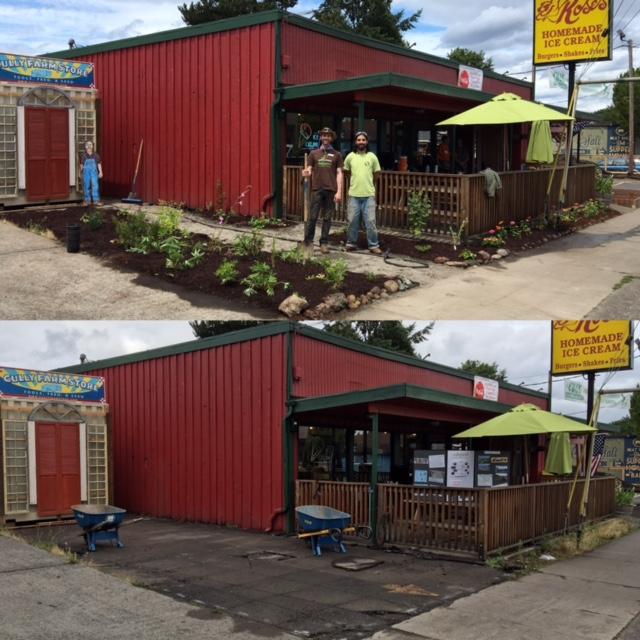 Depave projects don't need to be massive to have an impact. (Courtesy Depave Portland)

Other options include cut-outs for tree wells in parking lots and bioswales planted down the center of a lot. Bioswales are vegetated channels used to direct stormwater. McGuire likens it to acupuncture, lots of pinpricks versus wholesale excavations.

Regardless of a project’s scope, McGuire acknowledges that the concept of depaving runs counter to the American psyche. “Depaving triggers some nervousness for people. Because it really needs a mental shift, and a lot of people aren’t ready to shift away from what they’re used to seeing.”

There’s a book, she said — “Subtract” by Leidy Klotz — that goes a long way toward explaining why people will cling to pavement despite the problems it causes.

She’s quick to point out that when it comes to depaving, the removal is always followed by an addition. Gray infrastructure is exchanged for green, in a process that’s less about destruction and more about deconstruction and reconstruction.

What gets built back can take a multitude of forms, as long as it involves a nature-based solution. “The whole goal of depaving is to introduce and intensify experiences of nature in places where it doesn’t exist already,” she said.

Globally, institutions and governments have signed onto ambitious goals like 30 by 30 — conserving 30% of land and water by the year 2030 — and there’s no way to reach those numbers (Illinois is at 4%) without depaving, McGuire said.

“We can do all the de-carbonization we want, but we also have to build back in urban forestry and gardens and we need to take out paving,” she said. “The interesting thing is that a lot of people are all for greening – ‘Green, green, green; let’s green the city’ – but to get to the greening, we actually have to do the depaving too.”

Chicago has an extraordinary amount of pavement, with streets alone accounting for nearly one-quarter of the city’s surface, McGuire said.

“Asphalt’s this hidden-in-plain-sight thing. It’s everywhere; we don’t even look at it critically anymore,” she said. “It’s an infrastructure like lead pipes are an infrastructure. It’s been with us for so long.”

Given the focus of her Water Lab’s research on urban flooding, it’s not surprising that one of McGuire’s biggest concerns about pavement is its imperviousness. It blocks water from penetrating into the ground, leading to stormwater run-off which in turn leads to flooded streets and basements and carries pollutants into waterways.

The situation is exacerbated in particularly low-lying parts of Chicago that were once marsh land but have since been drained, filled in, paved over or otherwise developed. Despite the city’s highly engineered stormwater system, water finds a way to circumvent the pipes designed to contain it.

“This is the case down in the Calumet region, where a lot of communities don’t have adequate drainage infrastructure through the gray system. Water wants to be there, because water remembers,” McGuire said. “Those marshes were designed to hold water, that’s what they did. The soils that were there sponged that water up. And we lost the sponge. Depaving removes the root of the problem of runoff and flooding. It allows us to reengage with those soils again.”

Green infrastructure would not only help with stormwater absorption but would also mitigate the heat islands created by pavement, often concentrated in the city’s most vulnerable neighborhoods. The end goal is to make communities healthier and more resilient in terms of being able to withstand the extremes of climate change. 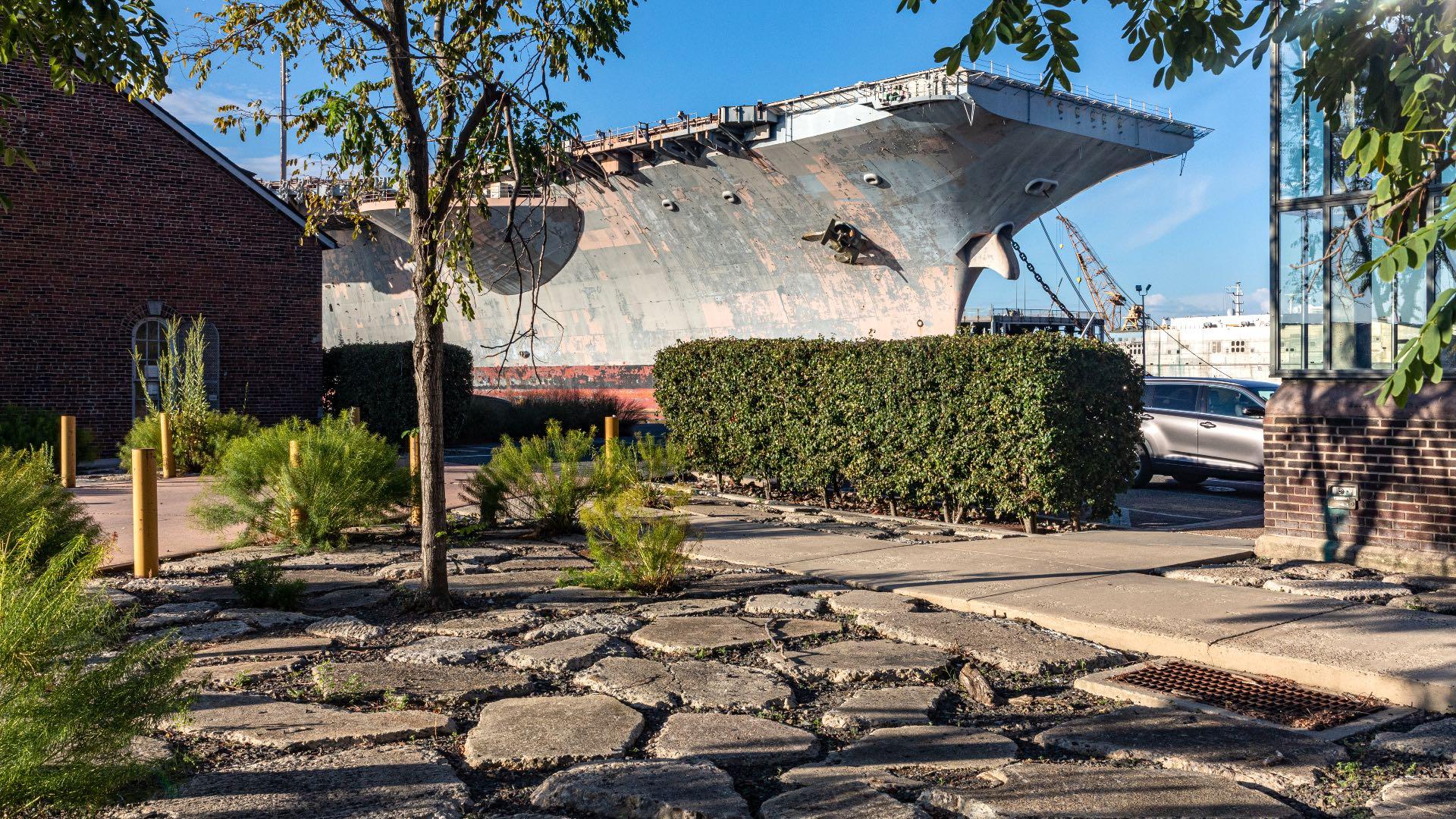 The Urban Outfitters campus in Philadelphia shows another creative example of depaving. Community-level projects can draw on these innovative techniques at a smaller scale. (Barry Doherty / Courtesy of The Cultural Landscape Foundation)

There have been some stunning examples of depaving projects conceived of by luminaries in landscape architecture. In Philadelphia, Julia Bargmann (whose Chicago sites include Palmisano Park) refashioned a Navy shipyard site into a headquarters campus for Urban Outfitters, demolishing asphalt and concrete and repurposing the materials as pavers and gravel in an industrial garden plaza.

With Depave Chicago, McGuire is aiming to take her profession’s most innovative ideas and make them more accessible at the community-level scale. Her plan is to give people the tools they need to tackle depave projects on their own, with a website in the works that will serve as a resource guide for everything from how to obtain permits to cost sheets and a list of contractors.

“That’s part of what this movement is about: making it more doable in the absence of strong policy or planning leadership,” she said. If Depave Chicago creates a groundswell that leads to depaving directives at any level of government, “That would be awesome,” McGuire added.

But first her team needs to identify an inaugural project site. The call for proposals remains open, with McGuire keenly aware that a lot will be riding on initial depave efforts.

“We need to get those pilot projects done and done well because those will be the thing that people will be looking at say. ‘OK, now I understand. Let’s do more.’”