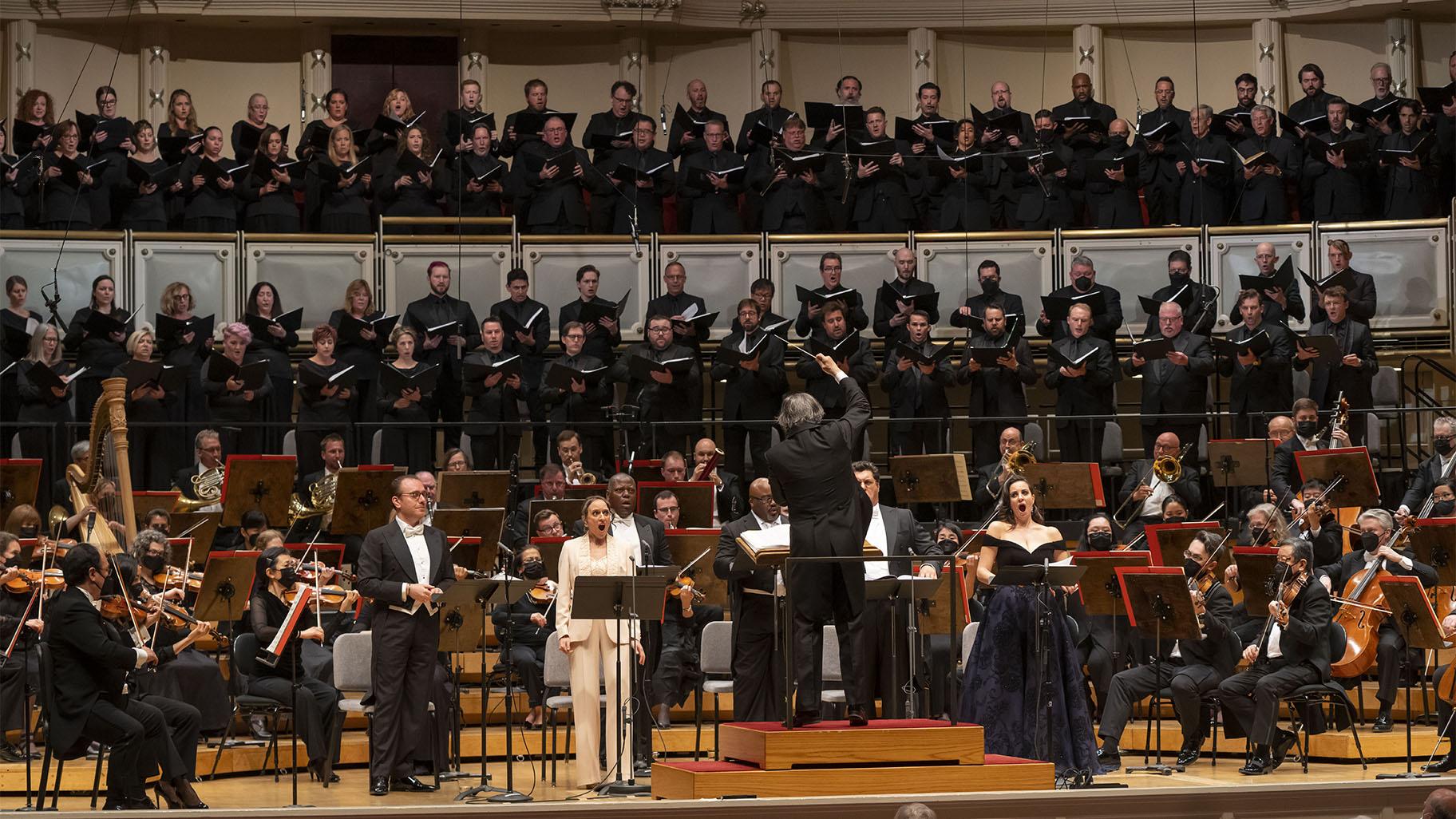 Maestro Riccardo Muti clearly made an inspired bargain with the COVID-19 devil this past week, promising that were he granted a rapid recovery he would lead a monumental concert performance of Verdi’s “Un ballo in maschera (A Masked Ball)” with the full Chicago Symphony Orchestra and Chorus, and a cast of superb soloists, all in sublime form on the Orchestra Hall stage.

Thursday evening’s bravura production was a major event in Muti’s penultimate season as the CSO’s music director. And it was a grand homage to both the composer whose work he has long cherished, and the orchestra he has embraced and nurtured since becoming its music director in 2010. It was a stunner. Muti not only clearly reveled in this homage to Verdi’s Italian roots and musical genius, but he held true to his belief that the music can be best heard and most fully appreciated in concert form, when it is largely liberated from the distractions that often can come with a fully staged work. Those are the occasions in which a director’s whims, overblown acting and elaborate scenery take hold.

Verdi’s music is great theater in and of itself and embodies every element of the drama being spun. Hearing it sung in Italian, a language with a music all its own (and in this case with a libretto by Antonio Somma after a work by Augustin Eugene Scribe), has an intoxicating effect. (Note: Along with the standard printed programs the CSO is providing concertgoers with free librettos in both Italian and its English translation).

The opera opens with a haunting prologue that makes the score sing even before we hear the singers themselves. There is the beautiful sound of the low strings to start, a quick transition to moments of great fury, and then a return to a sort of calm and hint of romance. This seamless shifting of dramatically different moods and events reflects the opera’s storyline which spins around a longtime male friendship that is upended by the sense of profound betrayal that develops when the wife of one of these men is revealed to be in love with her husband’s friend.

First performed in Rome in 1859, “Un ballo” caused Verdi many headaches as it faced real life political issues and censorship in Europe. Its setting had to be altered several times, with this version moved to Boston during the British colonial era. But none of that really matters as it is the human relationships — the jealousy, guilt, heated attraction and “masked” emotion that are at the core of the opera.

In brief, the story begins as Riccardo, Earl of Warwick and governor of Boston (the honey-voiced tenor Francesco Meli) is planning a masked ball. Among his guests are Renato (the strong, rich-toned baritone Luca Salsi) and his wife, Amelia (soprano Joyce El-Khoury, who captured her character’s sense of darkness and guilt early in the second act), with whom Riccardo is feverishly in love.

Enter Ulrica, the fortune teller (in a notably mighty performance by the formidable mezzo-soprano Yulia Matochkina). And while Riccardo hides himself, he listens to Amelia confess to this woman about her love for him, while also asking how she can overcome that passion which surely will destroy her husband. She is advised to gather a magic herb, and so she does.

After Amelia leaves, Riccardo also consults Ulrica, and she warns him that the next man to shake his hand will murder him — a warning he brushes off. That “next man” turns out to be Renato, who, as it happens, has arrived to warn his friend Riccardo that two conspirators, Samuel (Alfred Walker) and Tom (Kevin Short), (both bass-baritones with wonderfully rich voices) are planning to murder him. But along the way Renato discovers that Riccardo and his wife are in love, and he joins the conspirators in their plan to murder the governor, the man he believed was his friend. The deadly deed is done by Renato during a masked ball hosted by Riccardo, and ironically it happens at the very moment Riccardo is about to bid farewell to Amelia and send both her and her husband Renato back to England.

Along the way there was jewel-like singing from soprano Damiana Mizzi as Oscar, a page boy, along with performances by baritone Ricardo Jose Rivera as a sailor, tenor Lunga Eric Hallam as a judge and Aaron Short as Amelia’s servant.

The glorious, soaring sound of the grand-scale chorus overseen by Donald Palumbo, Chorus Master of the Metropolitan Opera, could not have been more ideal. And of course the magnificent CSO was the essential, emotionally charged voice throughout, with cellist John Sharp (plus all the low strings), and timpanist David Herbert, deservedly singled out, and Muti in his usual vigorous, meticulously detailed form.

While this concert has been billed as the Maestro’s final Verdi project with the CSO, audiences can only hope that after he steps down as music director at the end of next season he will return periodically to lead other such concerts.

On Mon., June 27 at 6:30 p.m. Muti and the CSO will present a free concert at the Jay Pritzker Pavilion in Millennium Park, with a program featuring Shostakovich’s “Festive Overture” and Tchaikovsky’s “Symphony No. 4.” For security details visit millenniumpark.org.