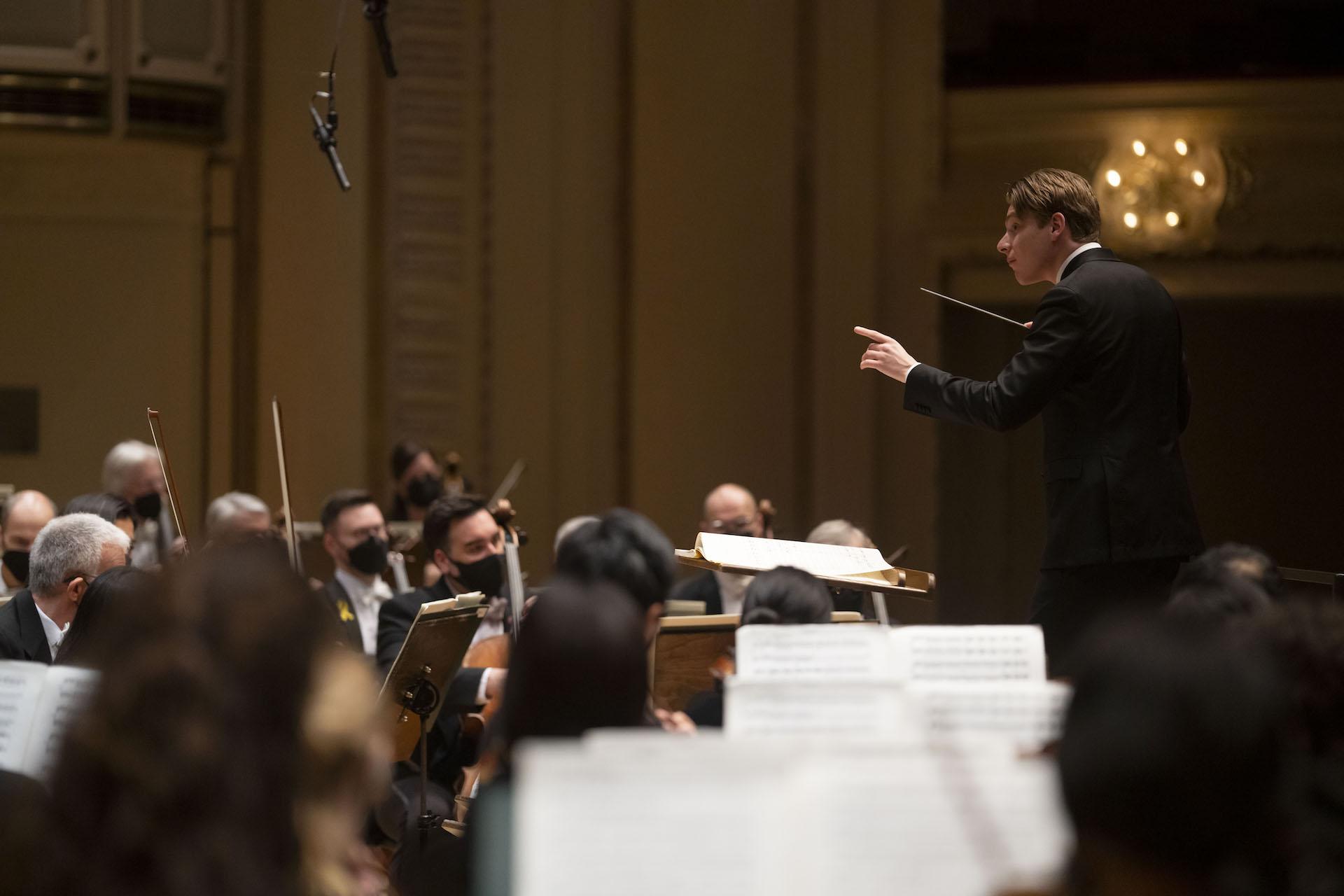 An altogether thrilling performance took place at Orchestra Hall on Thursday evening as the Chicago Symphony Orchestra, in its usual bravura form, played three demonically difficult works (by Prokofiev, Stravinsky and Anders Hillborg). Simultaneously, the audience was introduced to Klaus Makela, a slender, boyish, dazzlingly sophisticated 26-year-old Finnish-born conductor, and Daniel Lozakovich, a superb 21-year-old Swedish-born violinist, both of whom were making their debuts with the CSO.

If you needed to be reminded of the genius of two groundbreaking early 20th century composers, or hoped for an introduction to a fascinating contemporary composer, this concert unquestionably lived up to expectations.

In addition, if you were ready to welcome examples of the stellar young talent that will keep classical music thriving, this concert unquestionably did the job.

As the program itself did, let’s start with the new: Swedish composer Hillborg’s “Eleven Gates,” a 2006 work receiving its first performance by the CSO. As a program note explained, Hillborg grew up on rock music, became intrigued by electronic music, and delved into the classical repertoire, and is quoted as saying: “Experiment and tradition are not separate, but are constantly intertwined in the process of composing.”

Deploying a huge orchestra, including the use of an elaborate range of percussion instruments — everything from bongos, car horns, glass harmonica and wood blocks to congas, crotales, marimba and more — Hillborg’s 20-minute work began with an otherworldly scratchy sound, grew in volume and agitation to suggest a great storm, went on to utilize quirky rhythms and a great cacophony involving all sections of the orchestra. It created a kind of underworld aura, and launched into a percussion smorgasbord. “Eleven Gates” must be experienced more than described.

Then it was on to the two established musical geniuses, who were born in pre-Revolution Ukraine and Russia, but along the way in their lives took different paths (one temporary and one permanent) when it came to life in Western Europe, the U.S. and their homeland.

First up, Sergei Prokofiev. His “Violin Concerto No. 2 in G Minor” debuted in 1935, just as he was working on his score for “Romeo and Juliet,” one of the most brilliant, richly theatrical ballet scores in existence. At moments, echoes of memorable themes from that score could be heard in this fiercely demanding concerto, but there was more. And the boyish, slender Lozakovich unleashed it all in this piece that is, unquestionably, a furious workout for the soloist as well as for the orchestra’s full string section. The string section shifted from bowing to plucking countless times in a work that moves seamlessly, but thrillingly from tonal to atonal passages, and even has a wild violin sequence accompanied by castanets.

Throughout this demonically difficult piece, immense demands are made on all sections of both the orchestra and the soloist as exquisite melodies are juxtaposed against moments of high drama and extreme virtuosity. The impeccable connection between conductor, Lozakovich and the orchestra was palpable. 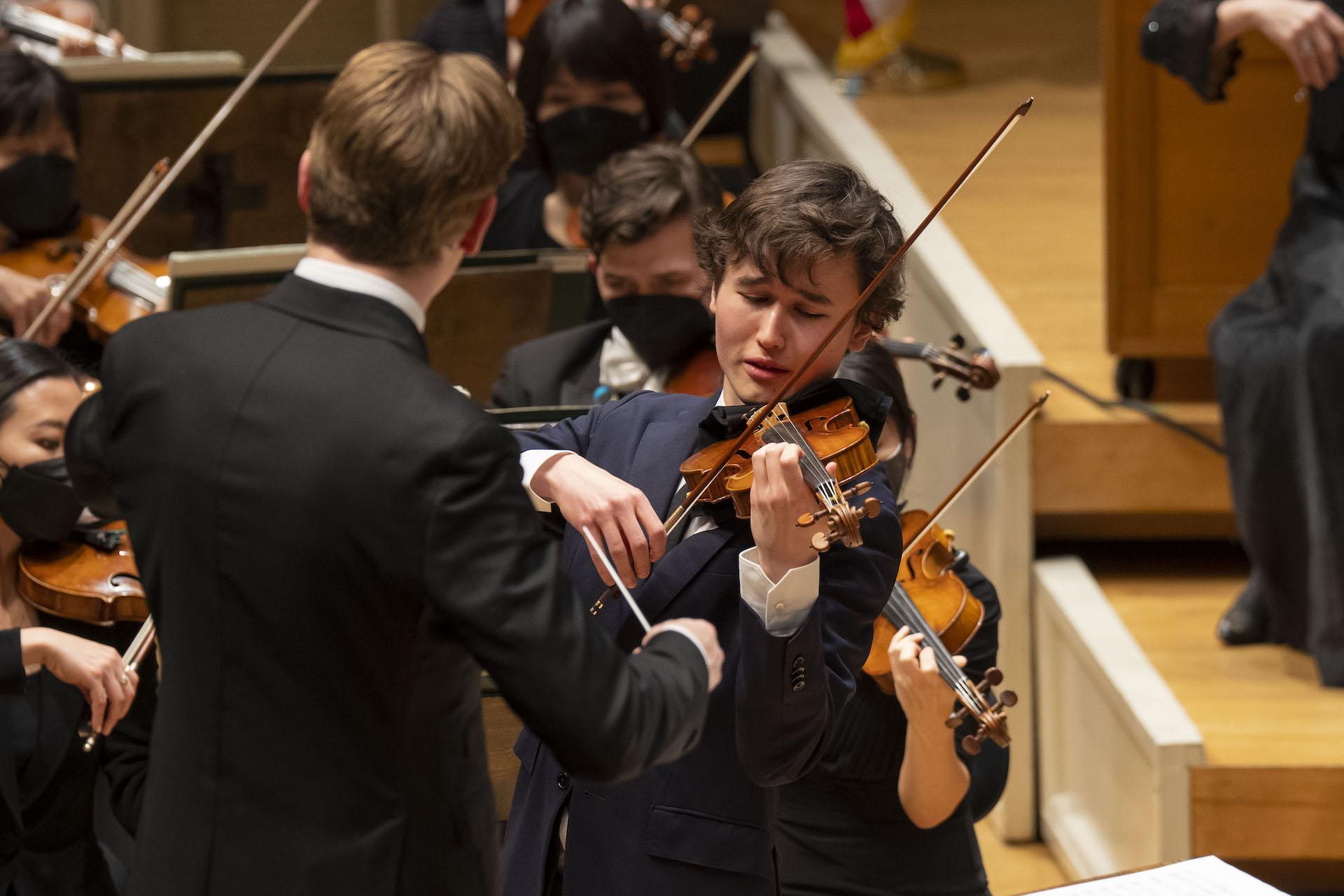 The concert’s second half was devoted to Igor Stravinsky’s fabled ballet, “The Firebird.” It had its triumphant premiere at the Paris Opera in 1910, where it was performed by Diaghilev’s Ballets Russes starring the illustrious dancers Tamara Karsavina and Michel Fokine.

While not quite as revolutionary as “The Rite of Spring,” which caused a furor at its Paris debut when it debuted three years later, “Firebird” is a work of great beauty and magic from the slow rumble to the suspenseful development of its opening, to its moments of complex syncopated rhythms, to its blend of the sounds of nature — from whirling winds to the flight of birds —  to its overall fairytale aura and dreamy melodies.

In addition, the work’s full-force instrumentation — from strings, to winds, brass and timpani, along with two harps, celesta, piano, bells, tambourine, cymbals, triangle, xylophone and more — brings great originality and dramatic madness to the musical storytelling. Makela conducted with all the grace of a dancer, and was in perfect control of it all. I only hope he will return soon to lead the CSO despite what must be his busy schedule as chief conductor and artistic advisor of the Oslo Philharmonic Orchestra and music director of the Orchestre de Paris.

While leaving Orchestra Hall I found myself thinking of the subtle and wholly unintended irony of certain aspects of this concert which was planned long before the nightmare in Ukraine began.

Not only did I hear echoes of the very different choices and fates made by Prokofiev and Stravinsky — the two musical geniuses who had their own issues with, and responses to the Soviet Union. But watching Makela and Lozakovich, the two young artists who were both born in Scandinavian countries, was a reminder of the serious concerns both Finland and Sweden now have about their Russian “neighbor.”