What if our cities could be more like forests? That’s the question at the heart of a new building prototype developed by architecture and engineering firm Skidmore, Owings & Merrill.

It’s not just for aesthetic purposes – it’s a way to adapt to the changing climate. Just this year, the United Nations described a report on global warming as “a code red for humanity.” That sort of urgency is what prompted SOM to think about the role of the built environment and whether it’s possible for a building to go beyond net zero emissions.

“Instead of just reducing carbon emissions to try to get as close to zero, can we go one step beyond and think of a building … that would absorb carbon from the air?” said SOM design principal Yasemin Kologlu.

The prototype the firm came up with is called “Urban Sequoia.” It debuted at the recent COP26 climate summit in Glasgow. The building uses several different approaches to capture carbon from the air, one of which is thinking about what the building’s made of.

“We use natural material. Rather than concrete and steel, we focus on using wood or using biobricks,” said SOM Sustainable Engineering Studio director Luke Leung.

The building also integrates natural processes – like using carbon as part of photosynthesis to produce algae, that in turn can be used as a biofuel. 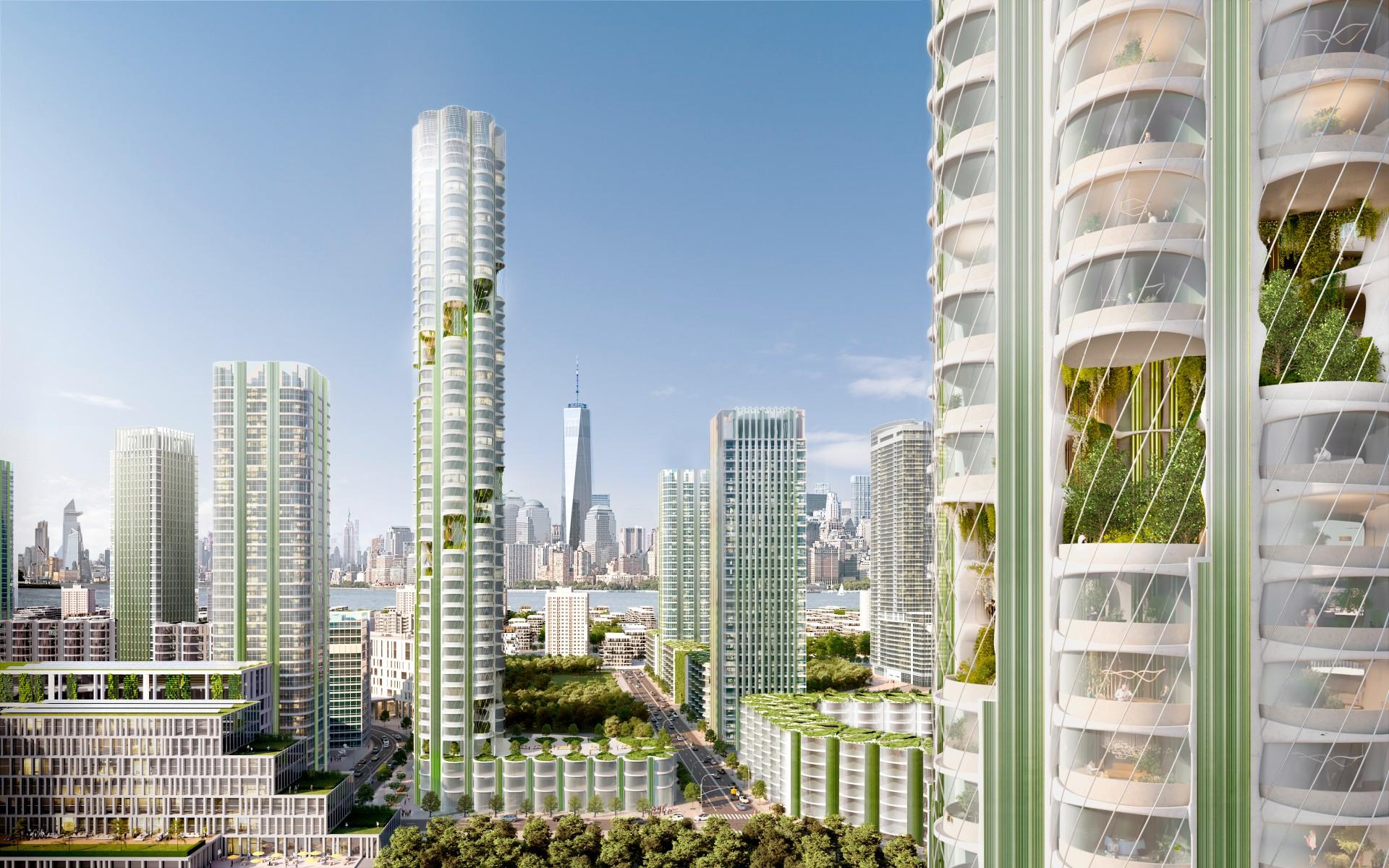 A rendering of the Urban Sequoia prototype. (Courtesy of Skidmore, Owings & Merrill)

“Rather than using fossil fuels or simply relying on electricity, we could actually use that as a biofuel for the heating and cooling of our building,” Kologlu said.

Additionally, the prototype has a carbon capture device that takes advantage of the way air naturally moves upward through tall buildings – as Leung describes it, “use the natural forces of the wind to power these devices like a fan.”

A slew of architects, designers, and sustainability specialists came together to develop the concept. They think the Urban Sequoia has big potential.

“We imagine that over 60 years, for example, it will sequester 350% – so 3 1/2 times – what it would have emitted if we were to build it today in a conventional fashion,” Kologlu said.

The project isn’t just about finding the best building materials or coming up with different ways to capture carbon. It’s also about the ways in which cities – and the people who build them – can learn from nature.

“We’re trying to use the power of nature, or life, to do a lot of the heavy lifting of the work in a building, or for the world as a whole,” Leung said. “Nature and humans thriving together.” 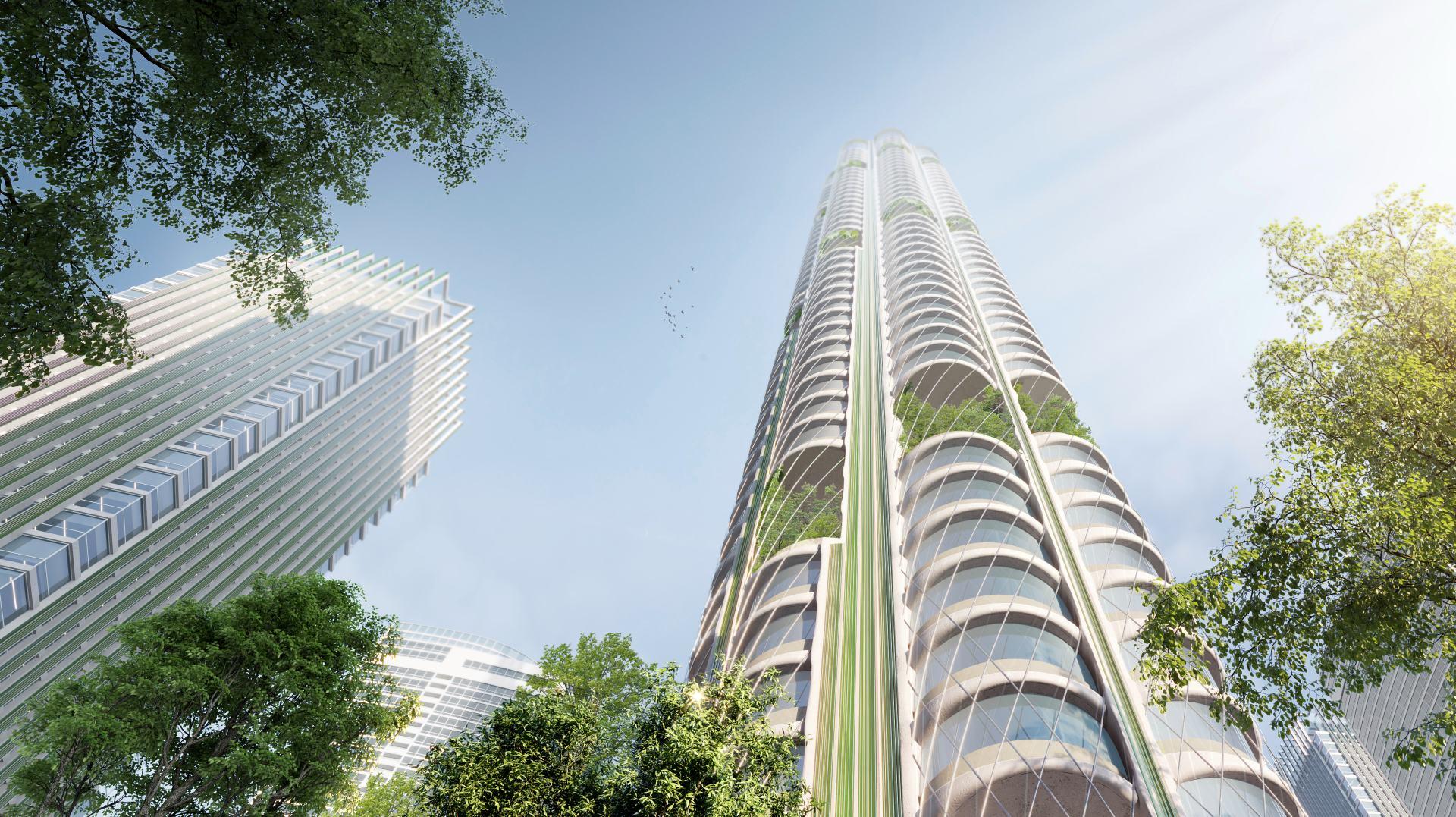 A rendering of the Urban Sequoia prototype. (Courtesy of Skidmore, Owings & Merrill)

The prototype could also have a positive effect beyond the urban environment. The carbon the Urban Sequoia captures could be used to produce not just biofuel, but building materials or food supplements, reducing the strain on agriculture.

“Oftentimes, we decouple the urban environment (from) farming,” Leung said. “We want to lessen the burden on the farmland by creating buildings that can actually … create the material we need.”

While there aren’t any plans to build one at the moment, the folks at SOM say they aren’t letting go of this idea.

“I would love my son to experience the world like I did,” Kologlu said. “I keep optimism because (climate change) is still a big challenge, but we have never been closer to addressing this challenge than this moment, and tomorrow’s going to be better too.”