With its sleek glass towers that dispense cars like so many cans of soda pop or bags of potato chips, Carvana, a Wall Street darling founded in 2012, bills itself as the future of auto sales.

But progress is in the eye of the beholder, environmentalists argue. To migratory birds, whose numbers have already been decimated in recent decades, a 140-foot-tall transparent structure that’s brightly illuminated 24/7 is a fatal collision waiting to happen, they say.

The battle between commerce and conservation has come to a head in Skokie, where Carvana is proposing to build one of its auto “vending machines” directly across the street from Harms Woods, a designated Illinois Nature Preserve situated along a key greenway for birds that hugs the North Branch of the Chicago River.

“Certainly, anything made out of glass can be a hazard. But here, it’s birds and glass being in that green corridor highly used by migratory birds and resident birds,” said Annette Prince, director of Chicago Bird Collision Monitors. “The enhanced threat is it’s going be lit at night and draw birds. It’s a triple threat.”

Members of the birding community, as well as residents of a neighboring condo/apartment building, who have their own beefs with Carvana, have been pressuring Skokie officials to pump the brakes on the Carvana proposal. Their opposition seems to have had an impact. 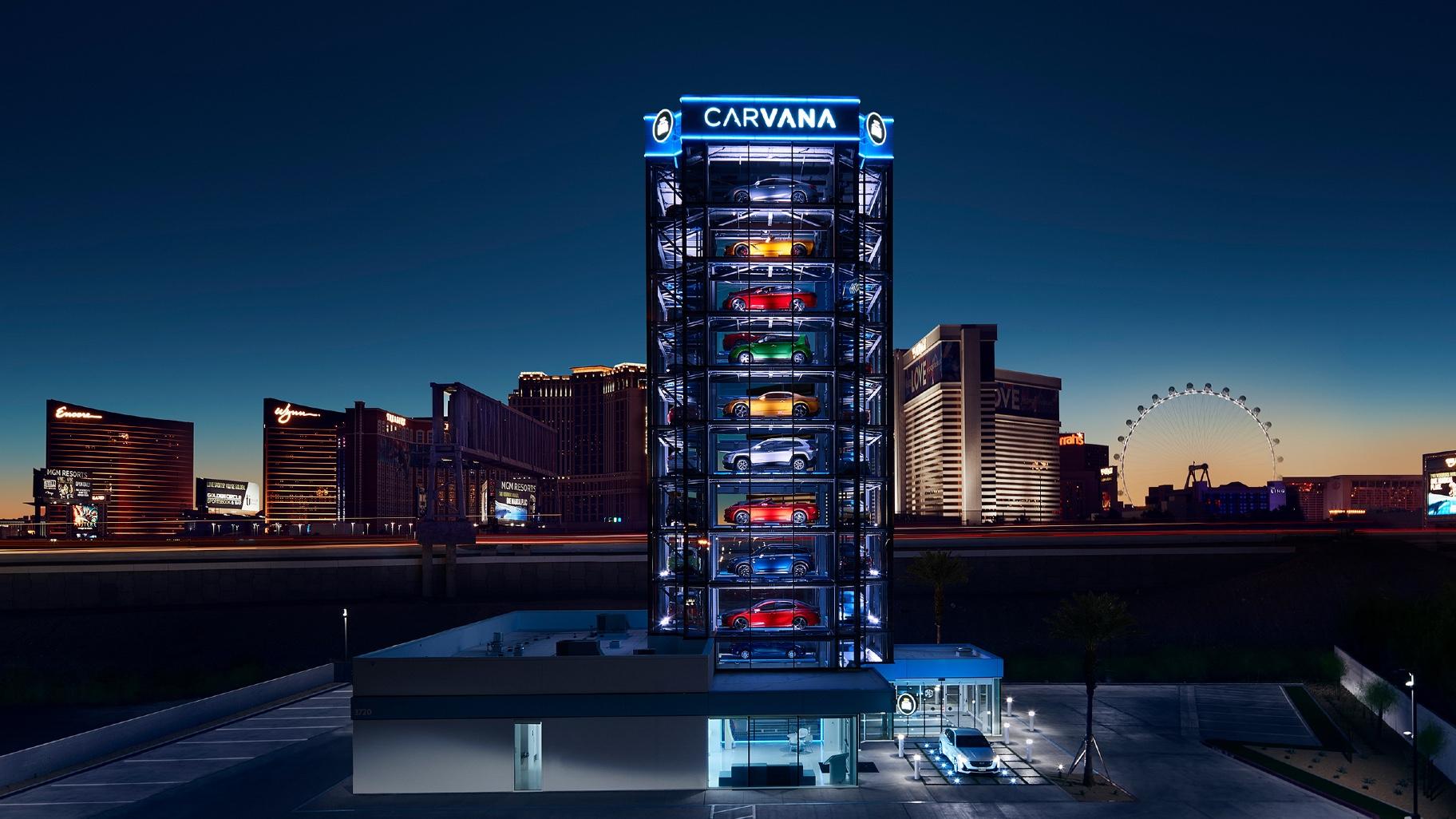 One of Carvana's auto vending machines. (Courtesy of Carvana)

Skokie’s Plan Commission had approved Carvana’s site plan, which requires relief from the village’s sign code, in mid-November, and the village’s Board of Trustees was expected to hold a final vote on the project this month.

But at the board’s Dec. 6 meeting, Mayor George Van Dusen informed those in attendance that the matter had been kicked back to the Plan Commission for an additional hearing.

According to a spokeswoman for the village, the Carvana proposal was remanded to the Plan Commission to address four issues: building and sign lighting, truck routes, delivery hours and bird strike prevention. The tentative date for the next discussion is the Jan. 6 Plan Commission meeting, and the earliest the matter could be considered by the village board is Jan. 18, she said.

Rob Kusel, a Skokie resident who was the first to raise the alarm about Carvana’s potential for bird strikes, said he’s eager to see what alterations Carvana brings to the table.

Carvana did not respond to a WTTW News request for comment, but at the Nov. 18 Plan Commission meeting, company representatives said, “Carvana is sensitive to this issue” of bird collisions and is “open to looking at different glass.”

“This has the potential to be a win for birds, a win for Skokie and a win for Carvana,” said Kusel. “We just don’t know yet if Skokie’s going to hold Carvana’s feet to the fire, or if Carvana’s going to do the right thing.” 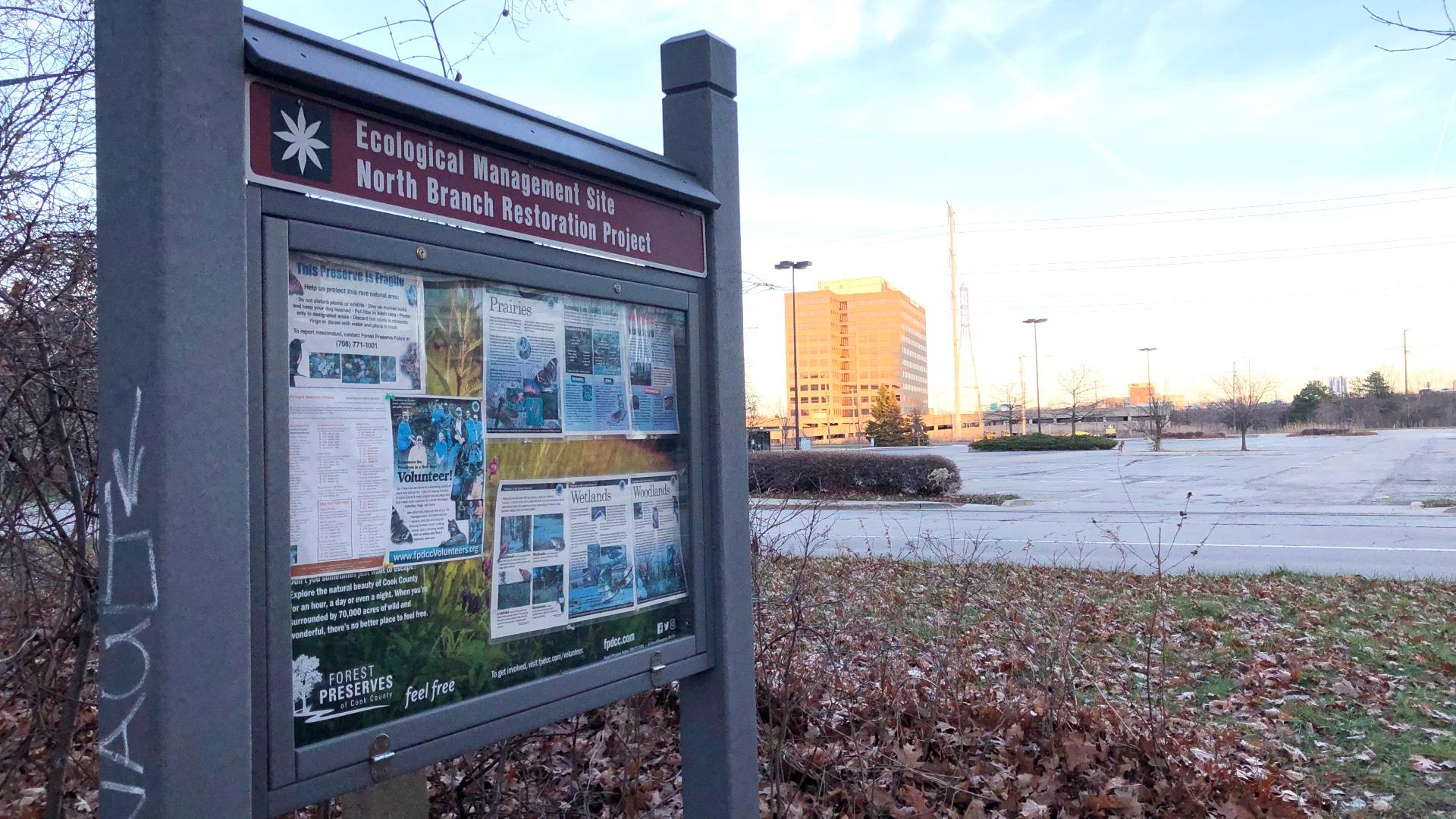 The proposed Carvana location, at 9801 Woods Drive, is currently a surface parking lot with 654 spaces, part of a campus formerly occupied by Rand McNally, which decamped in 2018. As noted in the Plan Commission’s report, no other developer has come forward with a solid plan for the vacated five-acre site.

The Edens Expressway runs east of the lot, and the Carvana building has been designed as a 3D billboard.

“It’s a display tower,” a company representative said at the Plan Commission meeting. “We want to make sure our cars are seen.”

The parcel is zoned for “office/research,” which covers a range of uses including office, retail and industrial. In response to complaints from residents of the adjacent Optima Old Orchard Woods development, who’ve called the Carvana tower “garish” and an “eyesore,” the commission noted the proposed building’s footprint is actually far smaller than what zoning allows.

The planned height of 140 feet is below the maximum of 180 feet; the proposed setback is nearly 100 feet from each property line versus the 50 feet required. Maximum land coverage allowed by buildings is 30%; the Carvana tower will occupy just 3.6%. In short, things could be worse.

Optima is itself a 660-unit glass-sided behemoth, completed in 2008, with proximity to Old Orchard Mall and Harms Woods touted as selling points. The complex arguably also poses a collision threat to birds, albeit not nearly as great as the Carvana tower, Prince and Kusel said. Among the significant differences: Optima’s glass isn’t utterly transparent, residents use window shades, and lights are out at night.

See-thru glass and constant illumination, on the other hand, are integral to Carvana and its brand. The company has already built 30 such towers in 18 states, including one in Oak Brook.

In Kusel’s opinion, however, “The moment they selected that site (across from Harms Woods), they took on an obligation to be caretakers. If ever a building needed to incorporate bird-safe design, this one does.”

Chicago is unusual among major cities in that it’s positioned along one of the country’s major north-south migratory bird routes. The combination of the city’s location, bright lights and tall buildings is a deadly one for birds, in fact, the deadliest in the nation, according to the Cornell Lab of Ornithology.

Birds either see straight through transparent glass, failing to recognize the obstacle in their flight path, or the reflection on glass throws off their perception of what’s real and what’s mirrored, especially if the reflection is of trees. Lights are further disorienting, drawing birds off their migratory route.

Chicago Bird Collision Monitors recovers roughly 6,000 birds each year in just a 1.5-square-mile area of downtown, and while Prince said she’s not advocating for a ban on glass buildings, there are enough products and design features available to minimize the danger of crashes.

“We have solutions, this doesn’t have to happen. It’s only right if a design can be bird safe and you can do it, why wouldn’t you?” she said. “It can be subtle and it can be attractive.”

Just look at the Milwaukee Bucks Fiserv Forum, which opened in 2018, Prince said. It was designed as the most bird-friendly professional sports arena in the country, incorporating features such as a type of coated glass that’s visible to birds but still transparent to human eyes.

“It’s not disruptive to the view, you have to get very close to the building to see it,” she said of the mitigations. But for birds, the building’s thoughtful design has been a lifesaver. “I’ve seen the birds approach it, divert and fly away,” Prince said.

The Bucks received a flurry of positive press for their arena, a PR boon that could similarly benefit Carvana if they opt to revise their plan and embrace the opportunity to make concessions for the birds, said Prince.

“It could only be beneficial to their brand,” she said. “They could set an example that would be welcomed in the next place.”

Prince acknowledges that plenty of people still don’t think of birds as worthy of consideration, that birds are acceptable collateral damage.

“You always have to fight those battles,” she said. But more and more, people are gaining an understanding of the critical role birds play in maintaining the health of an ecosystem, and a healthy ecosystem benefits humans as much as any other creature.

Chicago’s tallest buildings now routinely dim their lights during the most active periods of migration, and Illinois recently passed a law requiring bird-friendly design in all newly constructed state buildings.

Responsible lighting and lowered threat level, through some sort of glass treatment, are environmentalists’ big asks of Carvana. And they want those commitments in writing.

“That our one red line,” Kusel said. “It has to be specific.”