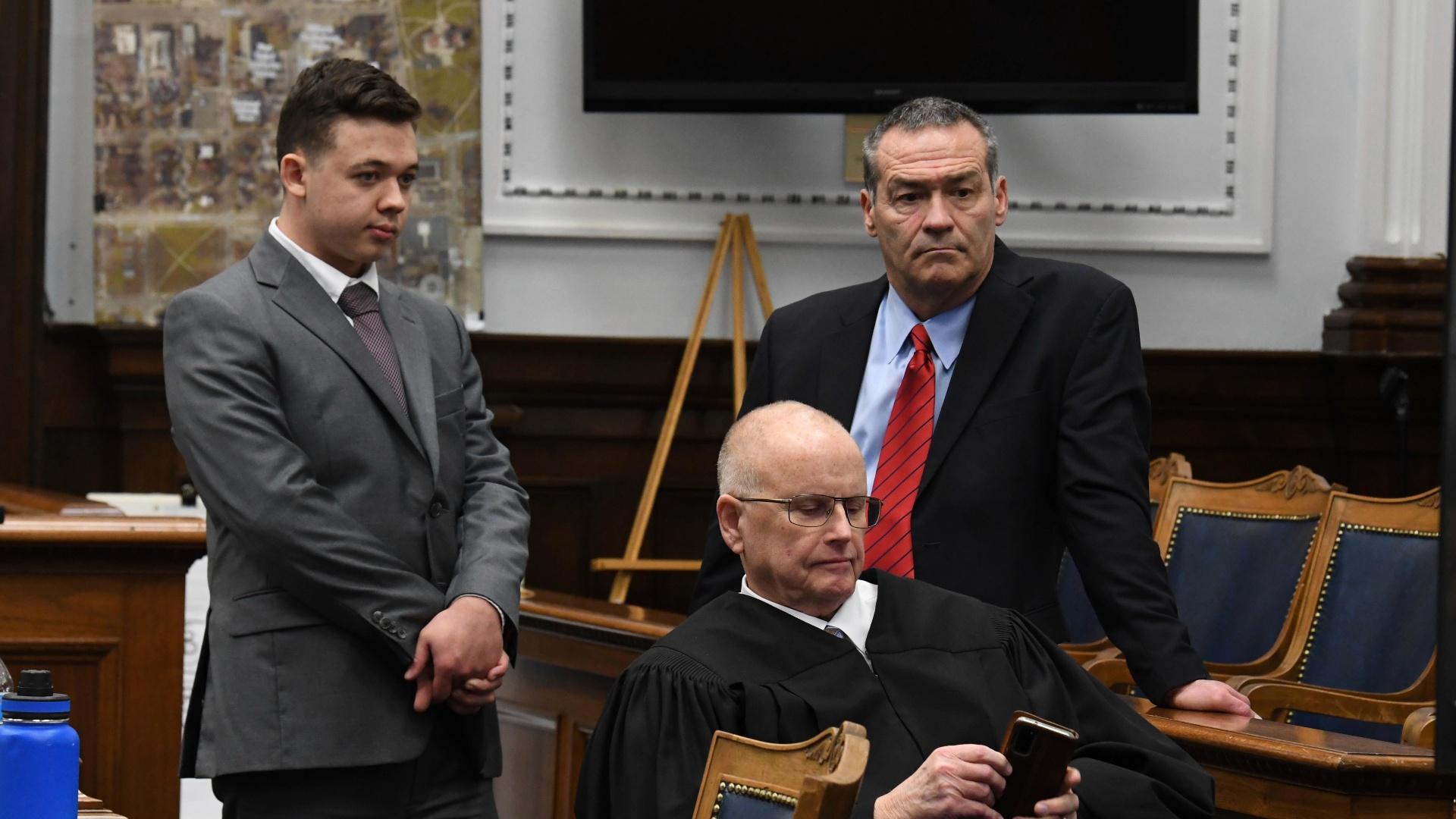 The jurors who will decide Kyle Rittenhouse’s fate will be allowed to consider lesser charges if they opt to acquit him on some of the original counts prosecutors brought, the judge said Friday during a contentious hearing in which both sides could claim partial victory.

Rittenhouse, of nearby Antioch, Illinois, testified that he acted in self-defense when he fatally shot two protesters and wounded a third during an August 2020 night of unrest in Kenosha following the police shooting of Jacob Blake, a Black man.

Jurors are expected to begin deliberating on Monday after closing arguments in a case that has left Americans divided over whether Rittenhouse was a patriot who took a stand against lawlessness or a vigilante who brought a gun to a protest to provoke a response.

With a verdict near, Gov. Tony Evers said Friday that 500 National Guard members would be prepared for duty in Kenosha if local law enforcement requested them.

Rittenhouse, who was 17 at the time of the shootings, is charged with intentional homicide and other counts for killing Joseph Rosenbaum and Anthony Huber and wounding Gaige Grosskreutz.

Wisconsin law allows the prosecution and defense to ask that jurors be told they can consider lesser charges as part of the instructions they receive before deliberating. Defense lawyers can object to lesser charges, and in some cases Friday, they did. For those that they didn’t object to, Judge Bruce Schroeder asked Rittenhouse to confirm that he agreed with his attorneys’ decision.

Schroeder told Rittenhouse that by including the lesser charges, “you’re raising the risk of conviction, although you’re avoiding the possibility that the jury will end up compromising on the more serious crime. And you’re also decreasing the risk that you’ll end up with a second trial because the jury is unable to agree.”

Schroeder said he would issue his final rulings Saturday, but he made some findings from the bench and indicated how he might rule on others. For counts where jurors will be allowed to consider lesser charges, they will be instructed to only consider them if they first acquit Rittenhouse of the more serious original corresponding charge.

Friday’s arguments over jury instructions were contentious at times, with attorneys rehashing debates they had earlier in the case. At one point, as prosecutors were seeking to add an instruction that would allow the jurors to consider whether Rittenhouse was provoked, the two sides debated about what a particular photo showed. Schroeder lost his temper, snapping: “You’re asking me to give an instruction. I want to see the best picture!”

Schroeder ultimately said he would allow the provocation instruction, which would ask the jury to consider whether Rittenhouse provoked Rosenbaum into attacking him. If the jury finds he did, that would negate self-defense.

Rittenhouse, now 18, faces one count of first-degree reckless homicide in the killing of Rosenbaum, who was the first person he shot after Rosenbaum chased him in a used car lot. Prosecutors sought to add a second-degree reckless homicide charge, but the defense objected. Schroeder said he was unlikely to allow the lesser charge because he thought a guilty verdict on the lesser charge would be overturned on appeal.

Rittenhouse also faces two charges of first-degree reckless endangerment: one for firing at an unknown man who tried to kick him in the face and another because a reporter was in the line of fire when Rittenhouse shot Rosenbaum.

Schroeder said he was inclined to allow a lesser charge of second-degree reckless endangerment when it comes to endangering the reporter, but he might not. He said he would not allow the lesser charge in the case of the unidentified man who tried to kick Rittenhouse.

Rittenhouse also faces one count of first-degree intentional homicide in Huber’s death. That’s the most serious charge against him and carries a mandatory life sentence. Huber swung his skateboard at Rittenhouse shortly after Rittenhouse killed Rosenbaum.

Rittenhouse also faces one count of attempted first-degree intentional homicide for shooting and wounding Grosskreutz in the arm. Grosskreutz, who had a gun in his hand, confronted Rittenhouse right after Rittenhouse shot Huber.

Schroeder said he would mull it over but was inclined to agree with prosecutors.

Rittenhouse is also charged with possessing a dangerous weapon while under the age of 18. It was not clear Friday what Schroeder intended to tell jurors on that charge.

Legal observers said both sides got some wins during the hearing. Julius Kim, a Milwaukee criminal defense attorney and former prosecutor, said no matter how confident Rittenhouse may be of his defense, accepting the lesser charge on the most serious count minimizes the risk of him being convicted and sentenced to life in prison.

“I think that they recognize it could be a good thing for Mr. Rittenhouse to allow the jury to potentially convict him of a lesser offense if they convict him of anything,” Kim said, adding that the lack of a defense objection on that count could signal that they might not be confident in an acquittal.

Still, the fact that prosecutors are seeking a lesser offense is a “tacit acknowledgement” that they aren’t confident the jury will convict Rittenhouse on the original charges.

“I think they are trying to salvage something at his point in time,” Kim said.

“Normally the prosecutor would not request a lesser included instruction if the prosecution had a very high degree of confidence in the likelihood of conviction of the greater offense,” O’Hear said, noting that adding it “practically invites the jury to compromise on the lesser offense.”

Testimony in the case ended Thursday after nearly two weeks. The most riveting moment in the trial came when Rittenhouse told the jury that he was defending himself from attack when he used his rifle to shoot the three men.

Closing arguments will be Monday, after which names will be drawn to decide which 12 jurors will deliberate and which will be dismissed as alternates. Eighteen people have been hearing the case. The panel appears to be overwhelmingly white, like Rittenhouse and those he shot.

The protests were set off by the wounding of Blake by a white police officer. Rittenhouse went to the protest with a rifle and a medical kit in what the former police and fire youth cadet said was an effort to protect property after rioters set fires and ransacked businesses on previous nights.

The case has stirred fierce debate over vigilantism, self-defense, the Second Amendment right to bear arms and the unrest that erupted throughout the U.S. over the killing of George Floyd in Minneapolis and other police violence against Black people.