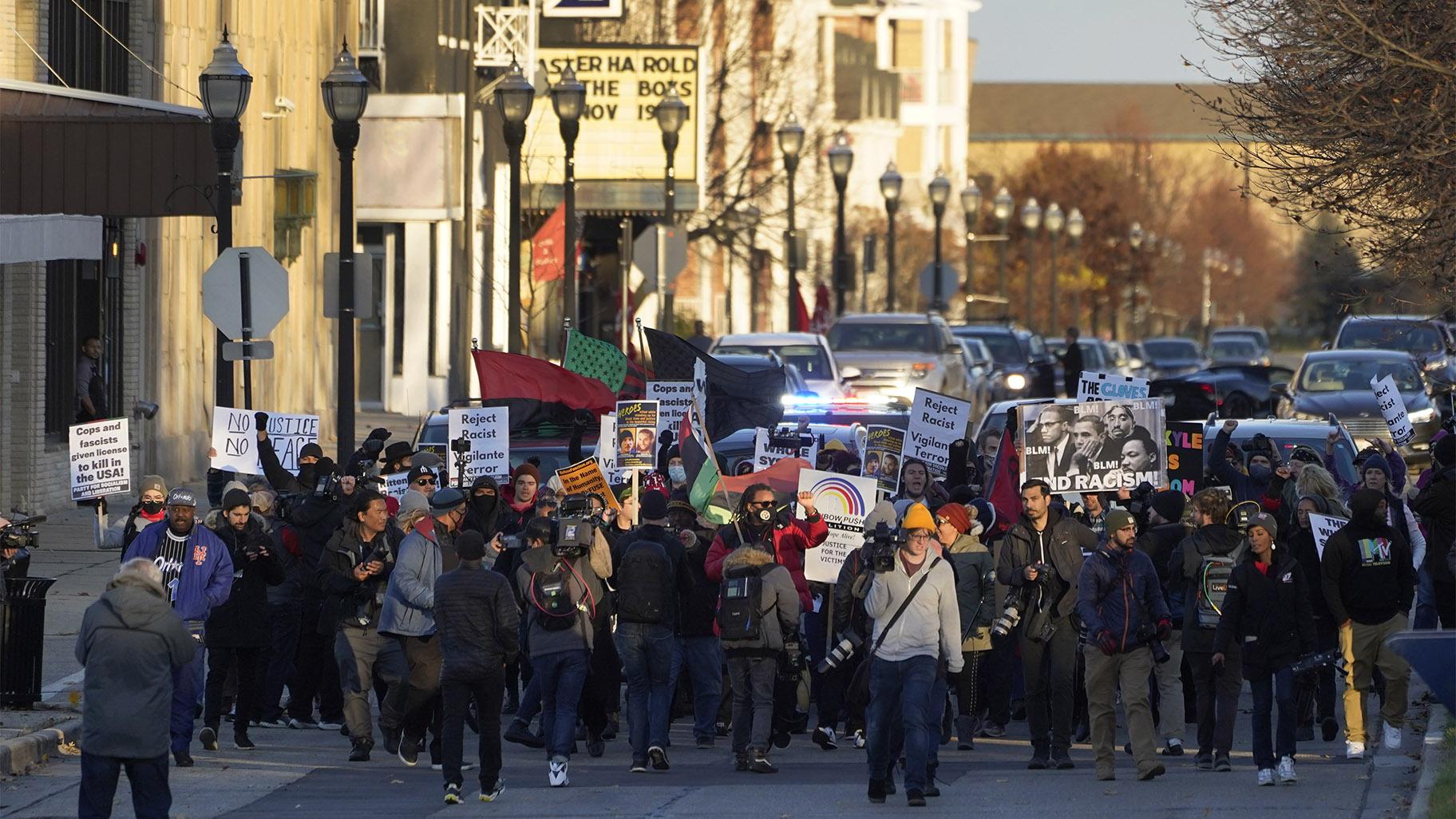 Protesters march, Sunday, Nov. 21, 2021, in Kenosha, Wis. Kyle Rittenhouse was acquitted of all charges after pleading self-defense in the deadly Kenosha shootings that became a flashpoint in the nation's debate over guns, vigilantism and racial injustice. (AP Photo / Paul Sancya)

Several dozen people gathered below the wind-whipped Wisconsin flag at Kenosha’s Civic Center Park on Sunday and warmed up with chants for justice before taking to the streets in protest of the acquittal of Kyle Rittenhouse.

Protesters regularly chanted, “No justice, no peace” and “Anthony and Jo Jo,” the latter referring to Anthony Huber and Joseph Rosenbaum, both of whom were shot and killed by Rittenhouse.

The Rev. Jesse Jackson, 80, who walked the first leg of a protest march in Chicago on Saturday, was scheduled to appear in Kenosha, but did not come. Organizers said he instead was working with congressional leaders to ask that the Department of Justice investigate the case for further prosecution. A release from Jackson’s Rainbow PUSH Coalition earlier Sunday said the Justice Department should also consider aiding and abetting charges for Rittenhouse’s mother.

“The verdict of not guilty is very revealing of the state of criminal justice in America,” Bishop Grant, the Rainbow PUSH Coalition National Field Director, said in a statement.

While Grant’s statement said Rittenhouse violated federal laws, he did not explain further and experts say Rittenhouse is unlikely to face federal charges because federal law applies only in very limited cases for homicides.

Rittenhouse, a then-17-year-old former police youth cadet from Antioch, Illinois, said he went to Kenosha with an AR-style semi-automatic rifle to protect property from rioters but that he came under attack and feared for his life.

The shootings happened during a tumultuous night of protests over the shooting of a Black man, Jacob Blake, by a white Kenosha police officer.

Rittenhouse is white, as were those he shot, and his acquittal led to new debates over racial justice, vigilantism and policing in America.

Derrick Johnson, NAACP president and CEO, said Sunday that the verdict was hard for African Americans to reconcile.

“Here you have a 17-year-old who illegally purchased a gun, traveled across state lines to protect property that was not his, for owners who did not invite him, and he put himself in harm’s way based on the rhetoric that he’s seen on social media platforms,” Johnson told CBS’ “Face the Nation.” He called it “a warning shot that vigilante justice is allowed in this country or in particular communities.”

Rittenhouse’s lawyers described him as a scared teenager who shot to save his life.

“I didn’t intend to kill them,” Rittenhouse testified. “I intended to stop the people who were attacking me.”

Note: An earlier version of this story incorrectly identified the firearm Rittenhouse traveled from Illinois to Wisconsin with. It has been updated.