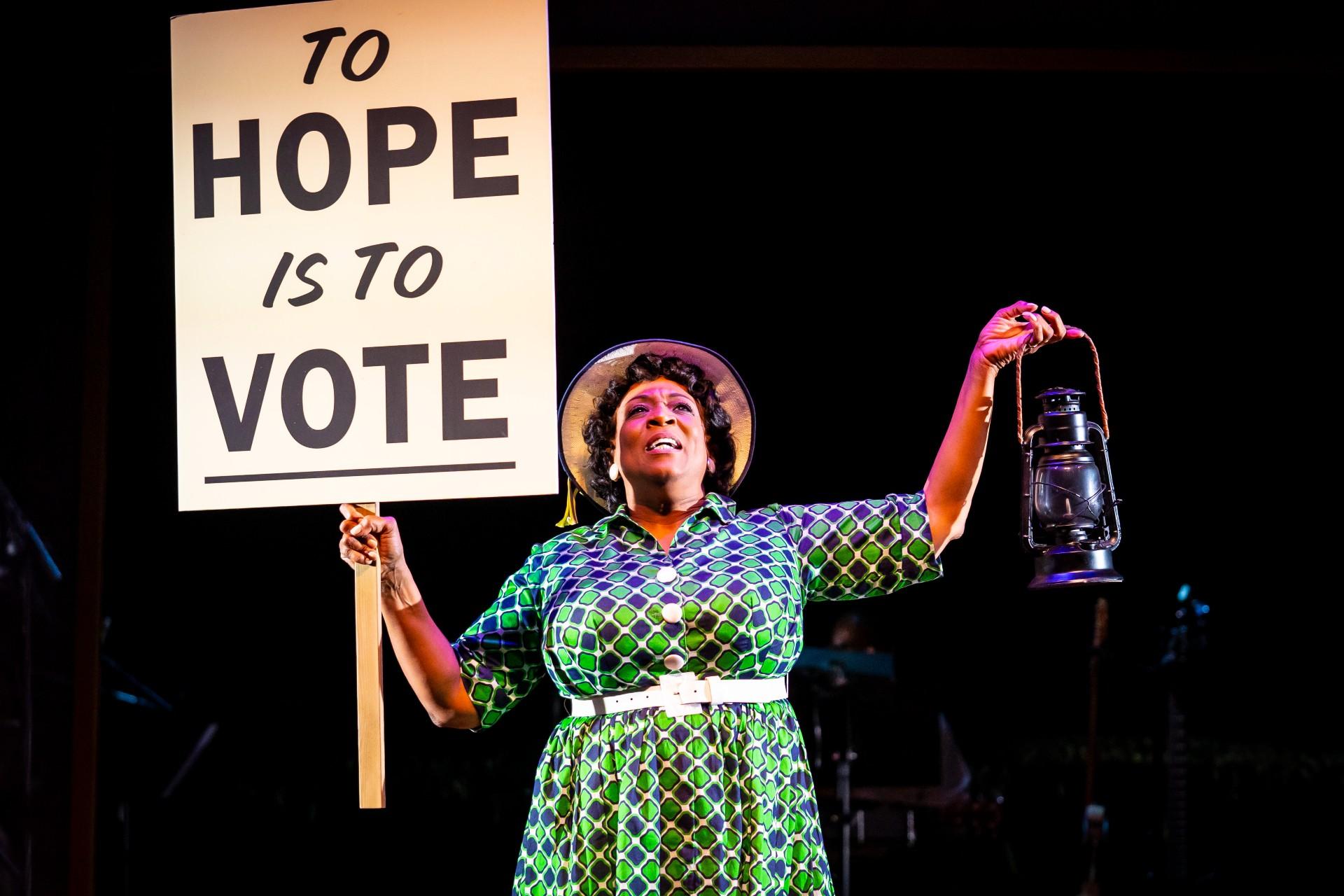 It takes an actress of Titanic skill, ferocious emotion, and monumental physical and vocal endurance to capture the essence of a woman like Fannie Lou Hamer, the fiercely determined sharecropper from rural Mississippi who had only a sixth-grade education. She was jailed and very nearly bludgeoned to death during her relentless campaign as a civil rights advocate in the early 1960s and became a pivotal force in the campaign to win the right for the Blacks in her state (and beyond) to register and vote.

It also would be difficult to think of anyone more ideally suited to meeting this challenge than Chicago actress and singer E. Faye Butler, who has been a theatrical groundbreaker herself for many years. For proof, simply make your way to the Goodman Theatre’s Owen stage where Butler (expertly backed by music director/guitarist Felton Offard, keyboardist Morgan E., and percussionist Deonte Brantley), is now giving a rip-roaring performance in playwright Cheryl L. West’s “Fannie: The Music and Life of Fannie Lou Hamer,” a 75-minute, one-woman show to which the actress brings all the grit, endurance, fiery spirit and vocal power that marked the indomitable Hamer herself.

I saw an earlier edition of this show when Butler performed it outdoors on the makeshift stage of a mobile trailer that toured Chicago parks in the fall of 2020. But I didn’t review it at that time because I sensed Butler’s galvanic performance deserved a larger indoor stage with better lighting, scenery and sound free from the constant noise of planes flying overhead on their way to and from O’Hare Airport. 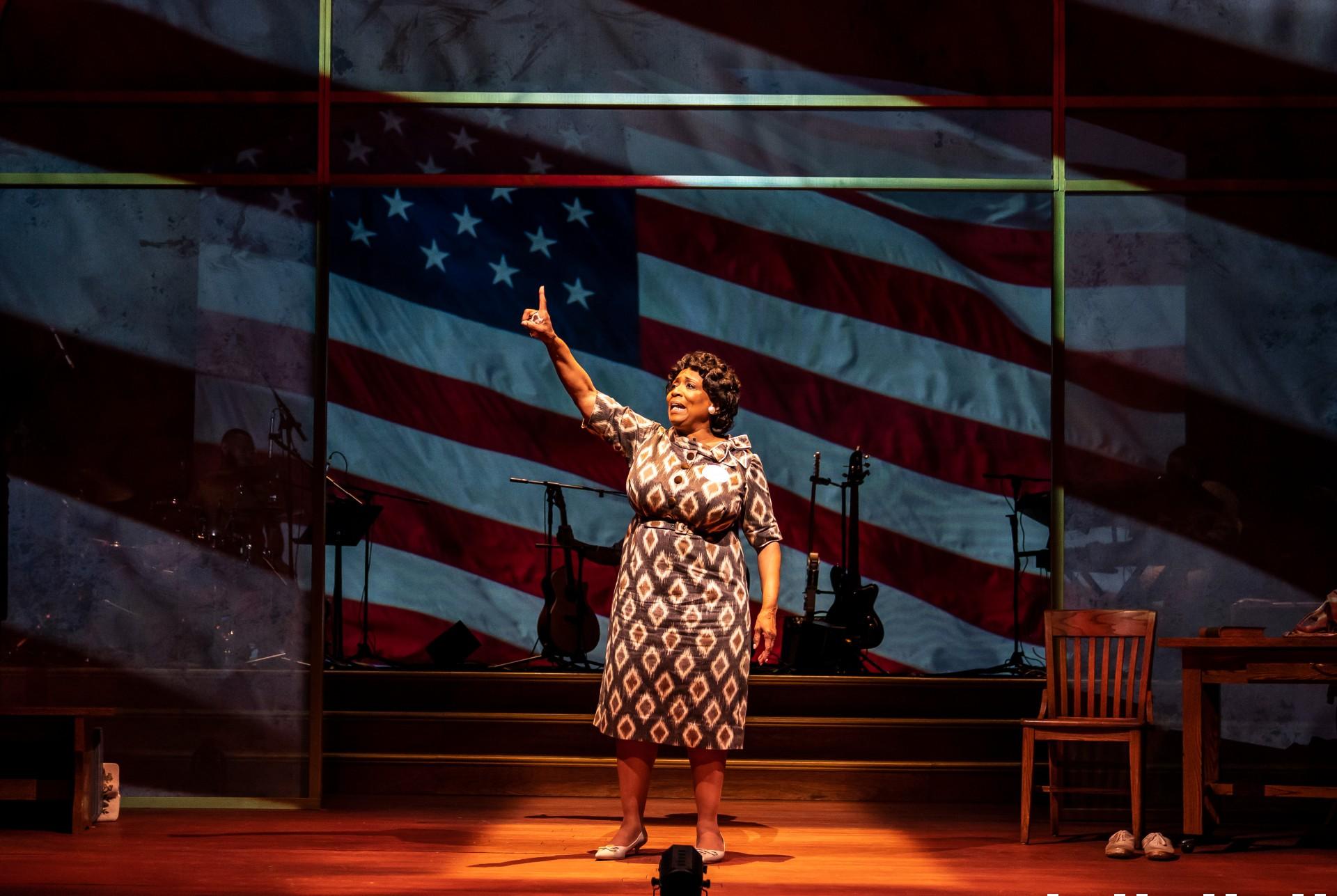 Now, the complete show, deftly directed by Henry Godinez, is on the stage it deserves, with a set by Collette Pollard that drapes the theater’s proscenium and balcony with the American flag, with lighting by Jason Lynch, and with far better acoustics. Butler’s clarion voice can now be heard in all its glory in more than a dozen songs – the spirituals and anthems that became a galvanizing soundtrack throughout the civil rights movement years, from “We Shall Not Be Moved” and “This Little Light of Mine” to “I Ain’t Gonna Let Nobody Turn Me Around” and “Keep Your Eyes on the Prize.” And the actress’s own irrepressible spirit fires up the stage with Hamer’s refusal to be denied her right to register, vote, and demand change, and to be a force behind the passage of the 1965 Voting Rights Act.

The punishment Hamer endured all along the way was brutal. But her relentless spirit and powerful voice ultimately triumphed even if, as noted in a recent New York Times review of two newly published books about Hamer (“Walk With Me,” by Kate Clifford Larson, and “Until I Am Free,” by Keisha N. Blain), “she remains largely unacknowledged in popular narratives of the civil rights movement, which still train most of the spotlight on its male leaders.”

As this play notes, Hamer also was a strong advocate for female rights. And in the late 1960s she championed land ownership for Blacks, establishing the Freedom Farm Collective (and even getting some financial backing from Harry Belafonte). As time went on she suffered from years of poor health, and died in 1977 at the age of 59. But as she might well have proclaimed by way of the show’s final song, “I’m On My Way to Freedom.”