Mayor Lori Lightfoot’s plan to close a projected $733 million budget gap in 2022 relies on $385 million in federal relief funds, approximately $298 million in savings and cuts and bets that the city’s economy will improve quickly as the COVID-19 pandemic finally wanes.

The plan also closes a $950 million shortfall in the city’s 2020 and 2021 budgets caused by the economic collapse triggered by the coronavirus pandemic with federal relief funds.

Originally, the city had planned to take on high-interest debt to avoid cutting city services, but reversed those plans when President Joe Biden a signed into law a federal relief package in March.

In all, Lightfoot’s proposal sets aside $1.3 billion, or about 68% of the city’s share of federal relief funds, to cover the cost of providing city services and paying city workers in 2020, 2021 and 2022 during the pandemic and make up for revenue lost during the economic collapse.

That includes $152 million the mayor has proposed saving until 2023, as a hedge against another surge of the COVID-19 pandemic, which is still spreading at a high rate of transmission in Chicago because of the more infectious delta variant.

But with the rest of the federal relief package, Lightfoot proposed funding a wide range of programs designed to help Chicago recover from the catastrophe triggered by the pandemic and end the surge of violence sweeping the South and West sides.

“On the eve of the 150th anniversary of the Great Chicago Fire, let’s match and exceed the determination of our ancestors who literally rebuilt this city out of the charred ashes and laid the foundation for the great global city that we are today,” Lightfoot said. “To build a better city, we must do more to invest in our people, our families and our neighborhoods. Foundational, transformative investments.” 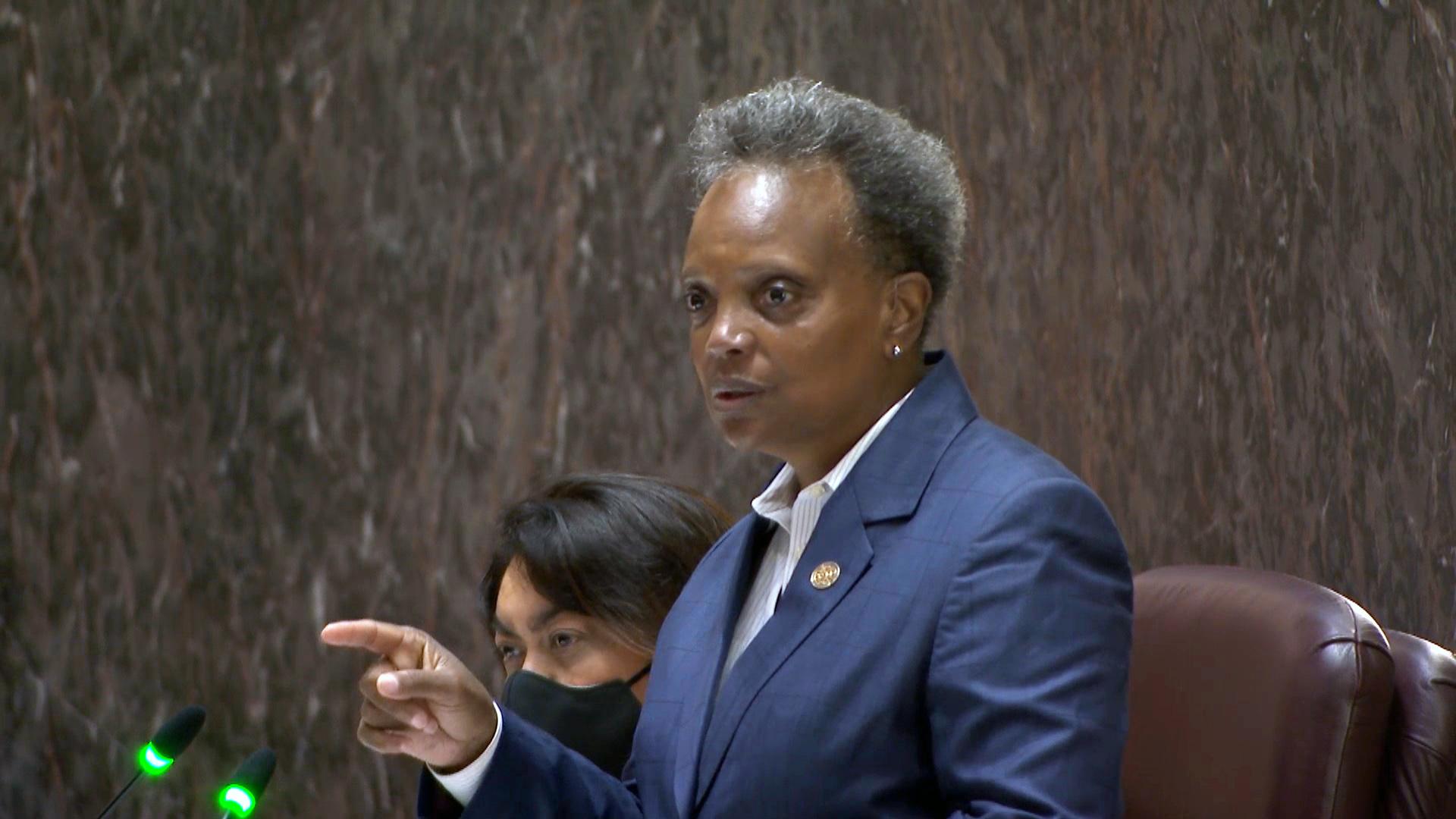 The largest investment proposed by the mayor would set aside $31 million to be used to fund a pilot program that would make direct cash payments to “hard-hit, low-income households in need of additional economic stability,” Lightfoot said.

That would launch the largest direct cash assistance program in the United States, Lightfoot said.

Ald. Gilbert Villegas (36th Ward) introduced a plan in April to use $30 million from the federal government to send 5,000 families $500 per month for a year, only to see it blocked by members of the City Council’s Black Caucus who said it was a non-starter since the city has yet to craft a plan to pay reparations to the descendants of enslaved African Americans.

“Imitation is the sincerest form of flattery,” Villegas said.

In addition, Lightfoot proposed using $15 million from the federal relief package to send mental health professionals to help Chicagoans who call 911 while experiencing a mental health crisis. In all, Lightfoot’s 2022 budget will spend an additional $52 million to expand mental health services in Chicago.

The city is also set to spend $240 million more in 2022 on affordable housing initiatives. That will create and upgrade more than 4,000 homes earmarked for low- and moderate-income Chicagoans, according to the mayor.

“I think it’s pretty clear that people in the administration have been copying this coalition’s homework,” Ald. Carlos Ramirez-Rosa (35th Ward) said in reference to initiatives supported by United Working Families, a progressive political group. “This coalition for months has been calling for certain investments to ensure that the federal American Rescue Plan dollars that the city’s receiving are spent on the things that our communities need.”

Leaders of United Working Families, who called for the bulk of the federal relief package to fund programs to shelter unhoused Chicagoans and provide direct aid to those struggling during the pandemic, declared victory after the mayor’s announcement.

“Today’s budget address would not have happened without months of organizing from the communities hit hardest by generations of neglect,” said Emma Tai, executive director of United Working Families. “The multi-year organizing that UWF has done alongside community and labor partners to fund the recovery, defund the police, and tax the rich is now setting the terms of the city’s annual debate.”

However, the mayor’s budget actually increases the budget for the Chicago Police Department by $189 million in 2022 as compared with 2021’s budget of $1.7 billion.

More than 75% of that increase —$142 million — will cover the cost of the pay raise called for in the new contract approved earlier this month by the City Council.

The rest of the increase will provide more resources for officers suffering from traumatic experiences while on duty and recruit new employees to fill the department’s 1,066 vacant positions, including 877 sworn officer positions, officials said.

Even as Lightfoot has been at odds with progressive alderpeople through most of her time in office, her spending plan appears tailored to win as many votes from the Progressive Caucus. That’s a marked change from last year, when Lightfoot’s $96 million property tax hike passed with just two votes to spare.

“Looking at it on its face, there’s a lot of things to be hopeful about,” said Ald. Andre Vasquez (40th Ward). “It looks like a Christmas list of things that people want.”

Ald. George Cardenas (12th Ward), the mayor’s deputy floor leader who will be charged with rounding up at least 26 votes for the spending plan before the end of the year, said his colleagues’ muted reaction to Lightfoot’s speech was understandable.

“People were shocked,” Cardenas said of the spending outlined by the mayor. “Their demands are being met. Thank God, obviously, for federal stimulus money.”

Lightfoot also proposed giving all 50 aldermen $100,000 each to spend on microgrants, telling them they were best equipped to help their communities recover from the pandemic.

That represents a new approach to budget negotiations for Lightfoot, who campaigned for mayor in 2019 on a promise to reduce the power of alderpeople to make unilateral decisions as part of her efforts to reduce corruption at City Hall. 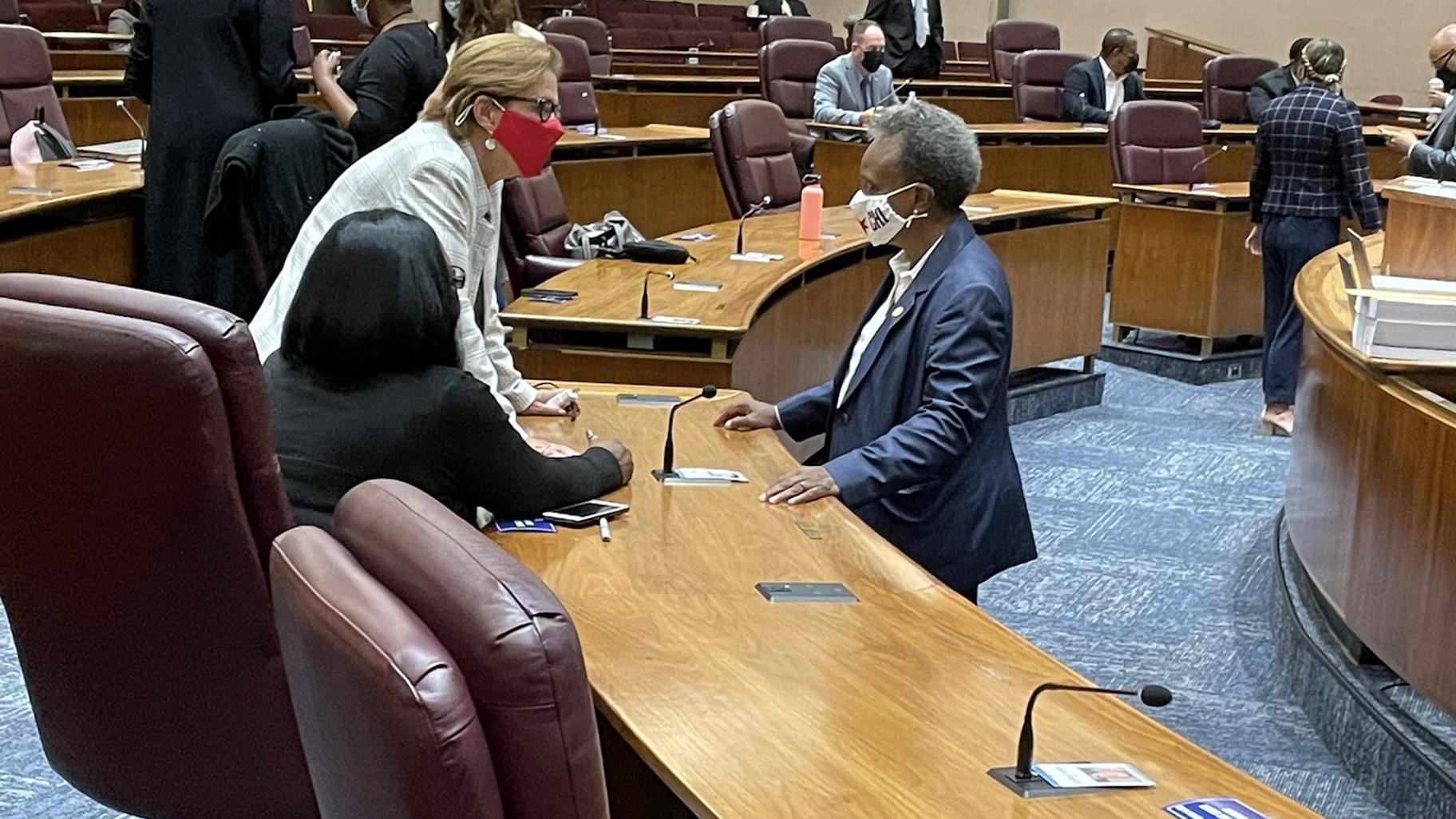 The city is set to spend $3.4 million to set up an oversight board for the Chicago Police Department, according to the mayor’s plan.

The city’s $12.8 billion 2021 spending plan authorized the city to hike property taxes automatically based on an increase in the cost of living. That will generate about $22.9 million in additional property tax revenues in 2022, officials said.

Jack Lavin, the CEO of the Chicago Chamber of Commerce, called on Lightfoot to rethink that plan.

“The current proposal calls for the second consecutive increase in the property tax levy in two years, all at a time when businesses are seeing their property tax assessments skyrocket without any clear reason why,” Lavin said.

In addition to the pandemic, the city’s 2022 budget will also be pinched by soaring pension payments, as the city faces an estimated bill of $2.3 billion for its four funds, an increase of $255 million, according to budget projections.

The city needs an additional $275 million to send retroactive pay increases to Chicago police officers. The bulk of that cost will be covered by a plan to refinance $1.2 billion in debt, officials said.

In all, the pandemic cost the city $1.7 billion, Lightfoot said.

Lightfoot’s budget proposal marks a shift in strategy from her original plan to staunch the flow of red ink caused by the pandemic. In April, administration officials proposed using $965 million from the federal relief package to pay off the high-interest debt the city incurred to balance its 2020 and 2021 budgets.

In addition to borrowing $465 million in 2021, the city’s 2020 spending plan called for the city to borrow another $500 million, but the city canceled those transactions after Congress approved the relief package.

However, U.S. Treasury Department officials told cities and states that “payment of interest or principal on outstanding debt” would not be allowed, throwing Lightfoot’s plans into disarray.

Lightfoot’s budget proposes taking funds from the city’s corporate fund, which officials use to pay most of the city’s bills, to retire that high-interest debt while using federal relief funds to keep the city’s bank account out of the red, officials said.